The story has aged… badly. Back then, that a fair few people aren’t White was still commonly seen as a comedy goldmine. So the dialogue is crammed with an astounding density of clichés about Native Americans.

But it would be trivial to rebuild to better standards. If you’re interested in bringing back old, obscure characters.

“Dakota” Jones is a tough dude. He’s handy with his fists, as well as a number of Old West weapons such as the Colt Peacemaker revolver, the thrown tomahawk, or the boot knife.

He seems able to reliably beat most underworld types and street brawlers.

He’s also a top sports car race driver. He’s seen competing in GT races, which back in the 1960s were one of the more popular car racing formats.

One panel implies that he’s at least a fair auto mechanic.

However, he’s also an impulsive and angry man. Jones isn’t dumb by half, but he’s prone to rash and violent action. 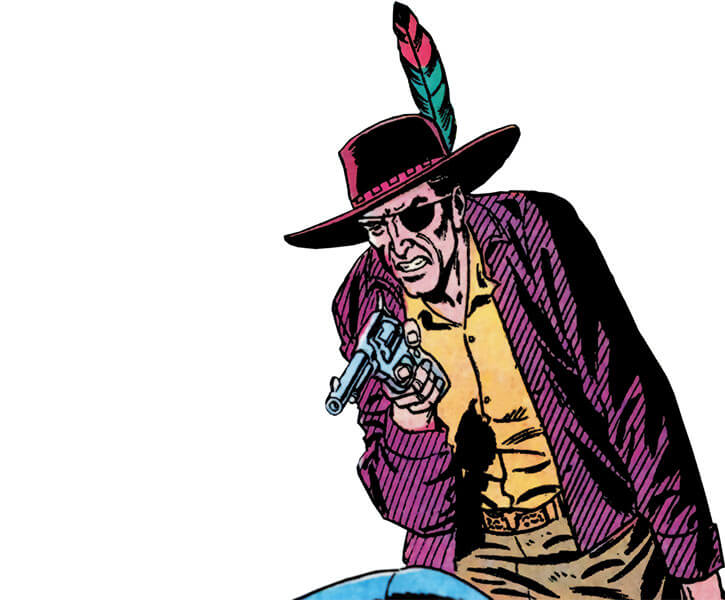 “Dakota” Jones is part-Native, which is obvious in his complexion and features. His nickname could have different sources :

He was one of the stars of GT racing (or sportscar racing) back during the late 1960s. Back then there were two FIA divisions – custom prototypes, and modified stock.

The story isn’t clear about which Jones is competing in. He seems to have his own, one-driver racing team, which would imply he modifies GT cars. But the story depicts him racing against a Wayne Industry prototype. He also mentions that he had beaten Wayne prototypes in the two races before that.

Perhaps Jones was the owner of a boutique car manufacturer doing custom, high-end motorcars for rich people and other indie racers.

Batman refers to him as a “free-wheeler”. This might be period racing jargon I’m not familiar with.

(If modernising the story, Jones would likely be a NASCAR driver.) 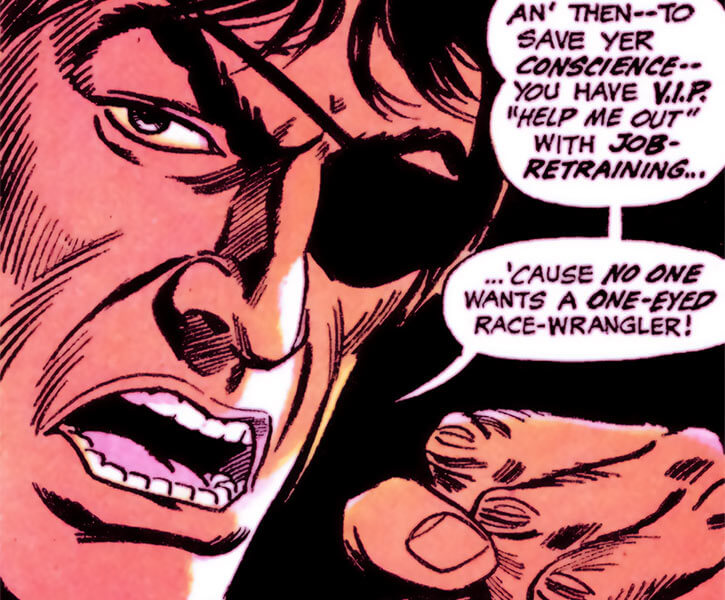 In 1969, Jones was the favourite in the Gotham-Classic racing cup. He heavily invested in improving his car, in a double-or-nothing move.

However, while he was attempting to pass the Wayne Industries car, something hit him in the eye. He crashed his car, though his reflexes were keen enough to prevent further wounds.

What had hit him turned out to be a .380 bullet. “Dakota” Jones had lost one eye, had lost the race, had lost his professional opportunities, and had very little money left.

Jones received a stipend from one of Wayne’s charities, who helped the victims of criminals.

But he strongly suspected that the shot had been engineered by Bruce Wayne so the Wayne car would win. Jones thus saw this help as a humiliation.

Soon, “Dakota” Jones attacked Bruce Wayne in his office. But Wayne outfought him, and insisted upon hearing Jones’ tale.

The Batman started investigating. Who had shot “Dakota” Jones, how, and why ?

At the conclusion of the story, Wayne says something vague about talking to the racing commission about Jones’ case.

This likely doesn’t mean that Jones was back behind the wheel. Though there are well-established examples of one-eyed motorbike racing champions, you need a wider field of vision for motorcars.

On the other hand, in a comic-book world, it might be less true.

It is also possible that Wayne was thinking about other approaches. Such as a technical position having to do with car mechanics. Or a deal to use “Dakota” Jones’ reputation to promote FIA events.

He could feature in some old Michel Vaillant adventures. It’d work oddly well.

Or you could have fun associating him with other obscure 1970s DC Comics race car drivers. Such as glamorous heiress Ronne Kuhn (from a 1975 Black Orchid storyline).

“Dakota” Jones’ stardom came after Cliff Steele’s, the future Robotman, who crashed his car in 1962 or so. But they certainly could have had ties when Jones was a newcomer to racing. 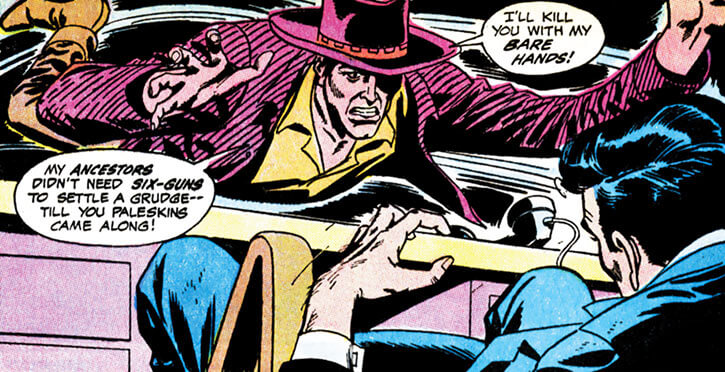 There’s even a decorative feather stuck in his hat. Which, in 1969, wasn’t that remarkable in a big city.

Jones is angry and bitter over his life having been wrecked. He also tends to do his thinking with his fists, and much prefers to be where the action is.

(If modernising the story, Jones would likely be less impulsive, to steer clear of a mass of racist precedents.)

(These are notes from our contributor Azraelfl about adapting this character to his TTRPG campaign.)

In the Universe AZ Multiverse, on the world of Earth 3 aka Earth S, “Dakota” Jones is the cousin of Bruce Wayne, nephew of Martha Wayne nee Standing Soldier. His mother married Robert Jones, a mechanic for the Richmond Enterprises racing team.

Growing up in the racing environment he eventually became a driver in the semi-pro South Dakota circuit before breaking into professional racing for Richmond.

After the Roxxon Oil team attempted to kill him, resulting in the loss of one eye, he became the manager of the Richmond Racing team. He would retire after the Squadron Supreme enacted the Utopia Program.

His mechanical skills would later be called upon by his cousin Bruce who sought his help modernizing the technological wings briefly used by Blue Eagle in the 1950s. These wings had originally been built by Thomas Wayne, the former minor costumed criminal The Scarab who had been pardoned after working as support for Blue Eagle. 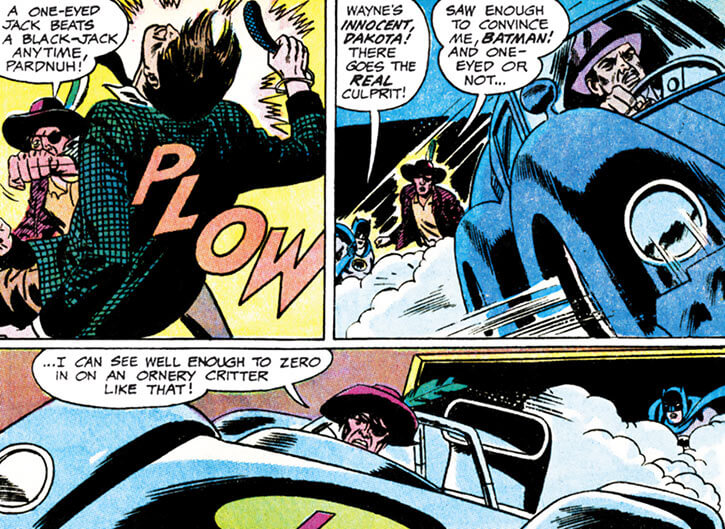