These evil pepperpots are out to conquer the galaxy. Sometimes they rely on help from their creator Davros. Sometime they just stick him in the fridge. 🙂

There are now two factions: ones lead by Davros (the Emperor), and the other Daleks.

Now, the thing to remember with Daleks, and this is absolutely crucial to Dr. Who continuity, is that there is not any single “Dalek” characterisation for the “species.”

This is due to the fact that Daleks are very capable of time travel, meddling with time travel, are basically manufactured cyborgs (sometimes by The Master). they thus have existed in disparate incarnations in multitudinous geographic and chronological epochs. 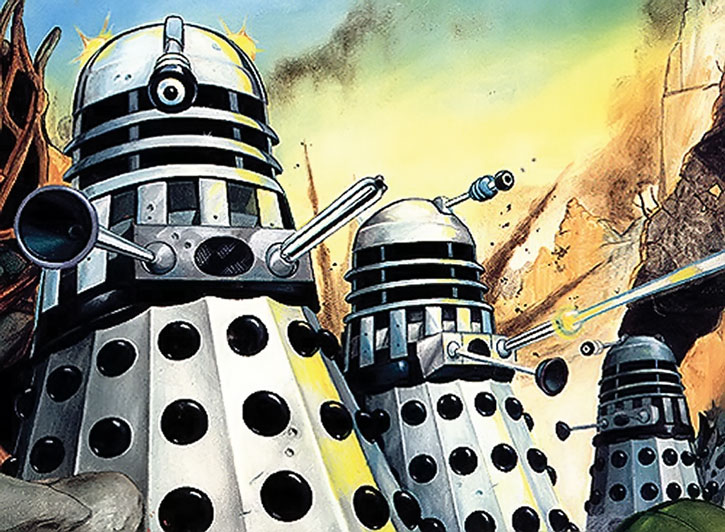 For example, the first appearance of the Daleks, I believe in the original Dr. Who series (the black and white one) had some relatively crude type Daleks invading England. These Daleks are essentially indestructible by any known Human means. Weapons designers of the Human rebellion try and fail to develop anti-Dalek bombs… The Daleks can’t be stopped.

However, “later” on in Dr. Who, Daleks can be foiled by throwing a beach towel in their general direction or by roping them off or all kinds of ridiculously pedestrian methods.

What this shows, I think, is that Daleks are a very long lived menace with time/space travelling capabilities. Hence, heroes can encounter earlier or later versions of the Daleks, with a little back story added (however fantastic). And every time the heroes encounter them, it can have a new twist to it.

In fact, that might make an interesting scenario. The first time the PCs encounter Daleks, they have a sinister agenda, want to “Destroy…Destroy”, etc.. Then, they meet some other Daleks who have different goals. Ie, the PCs end up fighting them only to find out that these particular Daleks are “enlightened” or something and from a different future…

“My vision is impaired !”

Replace the Kaleds with the the Psions.

The Psions attempted to expand outside of the Sirius system and landed on Thal, getting into a war with the Thals already living there. The mad Psion scientist Davros used genetic experimentation on Psion casualties to produce the Daleks, who destroyed both the Thals and the Psions on that planet before expanding into their own galactic presence.

This series of events led the Psions to abandon their future colonization plans and return to their self-imposed isolation.

The Daleks are still an active galactic power in the 30th century. The LSH has repelled several attempts to conquer Earth, even travelling back in Earth history on some occasions to thwart them. Their plague was responsible for one of the Dark Ages mentioned in Earth history between the 20th and 30th centuries.

In recent years they have been distracted by the civil war that has arisen in their ranks.

Drawbacks:
SPR (mute), Strange Appearance, SIH of non-Dalek life, SIA toward obeying orders from superiors, Fatal vulnerability (can only survive about two hours outside a Mark3 Travel Machine), Fatal Vulnerability (the Movellan virus), Misc.: the only emotion they have is hate, Misc.: belief that they are the superior race (bred into them).

Equipment:
DALEK SHELL (also called the Mark 3 Travel Machine) [BODY (Hardened Defenses) 06 STR 04 INT 02, Skin armour: 06, Sealed Systems: 20, Recall: 10, Running: 02, Bonus: allows Dalek to speak, Limitations: Skin armour is a shell-tight force field that only protects against Projectile Weapon and Bomb (or EV that is similar to those, such as many grenades), Note: with some versions, (only seen in 1st appearance) the Running power could not be used on non-magnetic surfaces]. The following accessories to the DALEK SHELL can only be hit by a Trick Shot :

Source of Character: Doctor Who, DCU history by Roy Cowan. 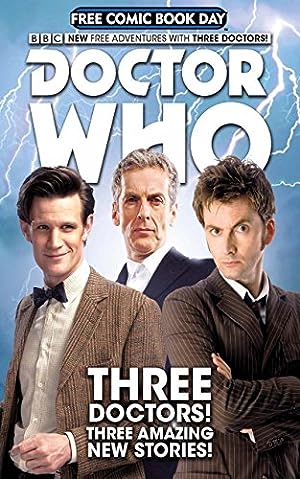 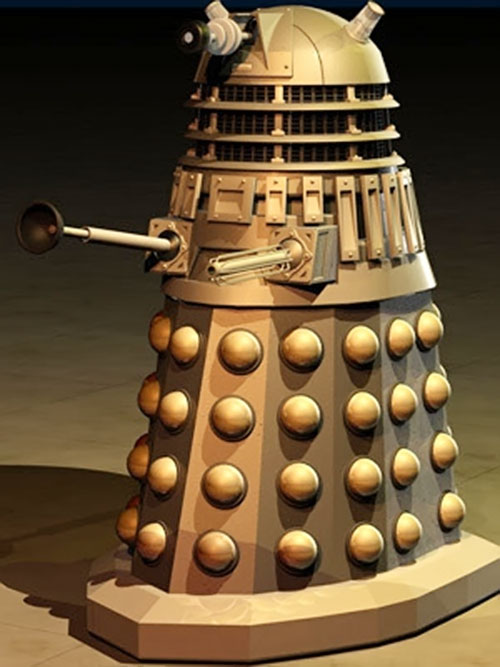