Dalton has been engineered for superhuman strength, speed and healing ability. He can secretes a variant of the “Red” drug used by Nuke, using a genetically enhanced organ. It gives him formidable aggressiveness and speed. Howbeit, it seems less powerful than the Red pills used by Nuke. Under Red his vision goes red and he tends to kill everything that moves.

He can also secretes a variant on the “White” drug using the same organ organ. That calms him down and counters the effects of the Red. It also colours his vision white.

Dalton has used White and his enhanced nervous system to induce deep meditative states in himself. However, it is… debatable whether this state is a drug-induced stupor or a sort of higher consciousness.

In this state, he can extend his consciousness forward. That grants him powers such as :

Dalton is heavily trained in military hand to hand combat. He’s further trained in an unrevealed Cambodian style of martial arts looking like a hard, northern Chinese kung fu. He prefers to rely on his unarmed prowess in combat, and makes a big show of eschewing guns.

Dalton probably has a background in an elite British military force. He likely wasn’t in either the SAS  or the Parachute Regiment , since neither Hauer or Childs have discussed a past with Dalton. It is probable that he was grievously wounded during a mission, and his body was then kept in suspended animation for the new super-soldiers program.

Previous attempts at super-soldiers in the 1960s never produced much. They were abandoned when dangerous Soviet super-soldiers such as the Crimson Dynamo (Anton Vanko) or Omega Red defected or disappeared. However, the projects in the 1980s were almost entirely based on the program which, in the US, resulted in the super-soldier Nuke.

Much of the work was done by a huge contractor, the ECE corporation. The UK super-soldiers used reconstructive surgery and the three drugs used by Nuke – Red (speed), White (down) and Blue (hypnotic). However, the drugs were used in different dosage and were produced by an artificial organ invented by doctor Khan.

The super-soldiers also received amnesia treatment, which had to be re-applied at regular intervals. Six such soldiers were created, code-named Revenge, Invincible, Dreadnought, Victory, Challenger — and Dauntless, Dalton’s codename.

During a mission in Cambodia, one of the soldier, Revenge, snapped. He slaughtered a whole village and most of the other Super-Soldiers.

Dauntless barely survived the ambush. He dragged himself in the nearby jungle, collapsing near a Buddhist monastery. The monks saved him and nursed him back to health. Dalton decided to lay low there. He also hoped that the monks could help him overcome the bloodthirsty urges brought by the Red drug in his system.

By harnessing the effects of White, he succeeded beyond all expectations. Dalton became able to achieve deep states of meditation, and limited forms of astral projection. The monks were impressed, and Dalton became something of an authority at the monastery.

During that time, the US super-soldier Nuke went postal in the middle of Manhattan. He was stopped by Daredevil (Matt Murdock) and Captain America (Steve Rogers). As a consequence the British Super-Soldiers project wouldn’t be revived, and there was no attempt to recover Dalton.

The ECE scientific team tried to go public with the drug-producing organ technology, seeing it as a formidable breakthrough for medicine. Whitehall  said no. When most of the scientists tried to force the issue they vanished.

The sleepers must awaken

Years later, Hauer (aka Invincible, the last survivor of the original squad along with Revenge and Dauntless) accidentally woke up. He was at first quite amnesiac and disoriented. However, these effects of the treatment gradually vanished.

When met with violent opposition from militarised ECE security forces he slaughtered them and escaped. Hauer commandeered the car of Sarah Wilde, a left-wing investigative journalist. Hauer and Wilde worked together to discover Hauer’s past. They soon were in Cambodia, where they located and met Dalton.

Dalton, at first, refused to leave the monastery and his life of peace. But Hauer and Wilde had been followed. Thus, a squad of Welsh super-soldiers attacked the temple, slaughtering the monks. Dalton reluctantly sided with Hauer in defeating the attacking forces. They managed to break the conditioning of the last surviving squaddie, Owen Llewelyn.

Having seen the horrors perpetrated by ECE, Dalton agreed to leave the devastated temple. He teamed up with Hauer and Wilde in exposing ECE back in Britain. He also sided with the U.S.Agent, who had originally been sent to kill Hauer.

The rag-tag team managed to reach ECE’s CEO and kill the psychotic Revenge. Captain America, who had been called for help by the U.S.Agent, convinced Hauer not to kill the CEO. Being a man of enormous influence, he was out of reach for the law.

After having had a talk with Captain America, Joseph Hauer resumed serving the government despite past abuse. Dalton, Llewelyn and Wilde followed him. The team often collaborated with S.H.I.E.L.D.. They later recruited Dragonfly II, the Guvnor and Princess Xantia.

However, about a month later, the Super-Soldiers were privatised. Their contracts were bought by the shadowy Mercy Security Corporation, who was interested in Hauer and Dalton’s modified organisms to improve their own super-soldiers program.

They were relocated in Alaska and were soon to be sent to protect a Central American dictator against attacks apparently conducted by the Punisher when the series stopped.

Dalton will go out of his way to customise his uniform to look cool, laid-back or Bohemian. He loves to go bare-chested.

Dalton is both a professional soldier and a charlatan. He’s collected, calm and competent, with an excellent command of special forces work, infiltration and fighting. But he’s also a fraud. He presumably spend most of his days in the military dodging regulations and hard work while trying to make himself look good.

Dalton’s big scheme is to launch a New-Age-ish religion centred on his personal charisma, good looks, Buddhist training and special abilities. Of course, he doesn’t have any interest in spirituality. It’s just to get rich quick and get abundantly laid.

Dalton tends to question orders, rules and authority. But since he seldom has any better idea, he will usually go along with the orders anyway. He’ll try to inject a maverick spin and cool attitude, but it is rather superficial.

Dalton is in love with his voice, body and martial arts move. He will often parade around. This makes it easy to underestimate him as a poseur.

“They virtually worship me here. Who knows, in a hundred years I could replace Christianity.”

“The Red’s pumping and I’m total control of every molecule in my body.I don’t need crude guns. I’m too good !”

“I practice the art of fighting without fighting.”

There’s not much precedent for the UK Super-Soldiers in the DCU. Just import Nuke as suggested in his writeup, then import the Super-Soldiers. Unless your game is set in the UK, they’ll probably be more useful as mercs for Mercy than as a national black ops outfit. 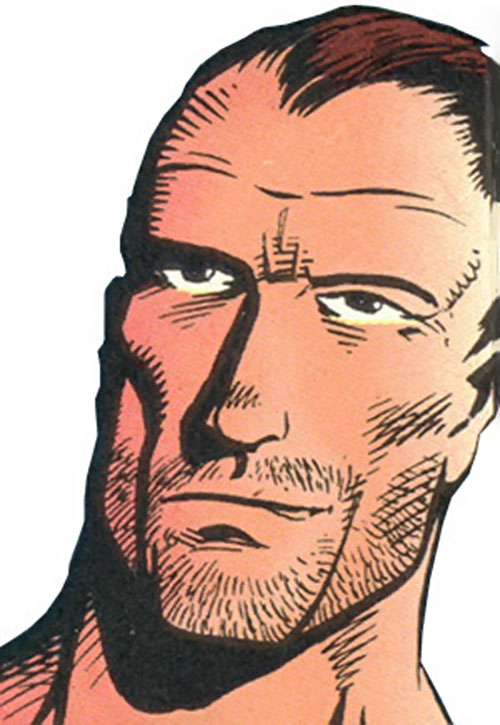 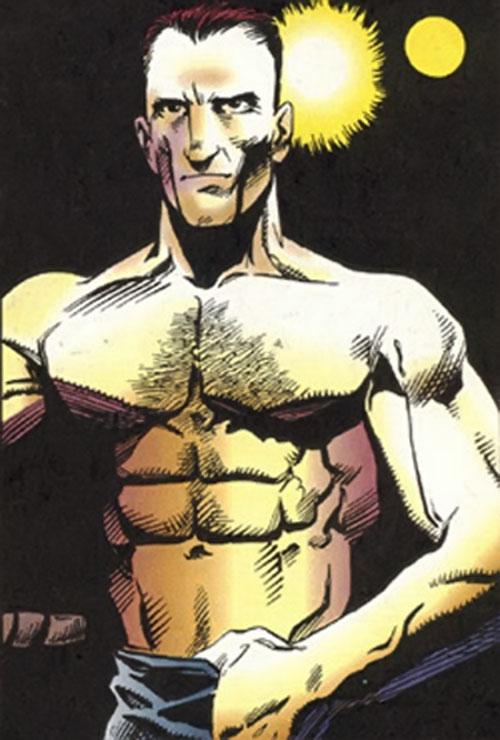