This specific character was created for the What Else? play-by-e-mail RPG campaign.

Hellblaze’s most obvious abilities are the result of his demonic heritage. His flashiest power is the ability to project soulscorching “Hellfire,” similar to that employed by Speed Demon. Hellfire does not physically burn its target, although it can be perceived by its target as heat.

Hellblaze can sense the presence of creatures and objects with magical properties within a range of about 200 yards. He is stronger than normal and can lift over half a ton with effort. His heritage makes him almost impossible to kill with physical damage.

He possesses great intelligence and an iron will. He has amassed a wealth of occult knowledge and is – not surprisingly – an authority on demonology.

Probability bends for Hellblaze and he is adept at exploiting waves of “synchronicity energy” following magical crises.

He knows a variety of tricks and rituals that he has picked up over the years.

Damion Hellblaze was born in Fire Lake, Massachusetts to “Edmond Hellblaze” (actually the fallen angel Lucifer) and Victoria Constantine. It is unknown whether Victoria was aware of her lover’s true nature. Damion’s mother did not survive the birth.

“Edmond” hired a series of nannies to watch young Damion, as he was often away “on business.” When Damion was five, Lucifer tired of raising his disappointingly-normal son. He faked his death, burning the mansion he had purchased. The house was uninsured, so the land was sold for pennies on the dollar.

Probate Court ate up the majority of Edmond Hellblaze’s estate. The balance — and Damion — were sent to his only known relatives, Thomas and Mary Anne Constantine, then residing in Liverpool.

After Thomas Constantine died in an industrial accident, it was left for Mary Anne Constantine to raise Damion and his cousin Cheryl. She took a series of menial jobs and tried to make the money last as long as possible. But there was little of it left by the time Damion became a teenager.

It was at this time that Hellblaze’s demonic heritage began to manifest itself. While still nominally living at home, he integrated himself into the punk scene. Damion usually only stopped by the house to eat or nick cigarettes. He was naturally drawn into the magic-punk subculture and, by the age of 15, was already well-known among Liverpool’s (limited) occult community.

By 18, Damion had studied a variety of occult disciplines and moved to London. He assembled a team of adepts, whose abilities he discovered he could sense if he got close enough. For his first major task, he learned of bizarre disturbances in the Casanova Club in Newcastle from one of his occult contacts. To this day, Damion refuses to discuss what they found there.

Whatever did happen, the experience drove Damion insane. He was committed to the Ravenscar Secure Facility for the Dangerously Deranged. There he spent two years integrating the horror of his experience and clawing his way back to sanity. Without his superhuman spiritual resilience it is likely he would never have recovered.

Pronounced cured, he was released and returned to the United States for the first time in nearly two decades. He realizes that ignorance was his downfall and plans to spend time amassing vital lore in many fields. He intends to seek out the other members of Earth’s mystic community and learn from them what he can.

Damion Hellblaze is an incredibly-good looking man in his mid-20s. He is charismatic and not above using his talent to manipulate people to serve his own ends. He smokes heavily since he learned that cigarettes don’t adversely affect him.

He has recently started wearing a more traditional “superhero” costume in hopes that he will gain the attention of other heroic mystics and for recognition value. It is primarily dark red with gold trim and a pentagram insignia on the jersey. However, he’s self-conscious about it and usually wears a trenchcoat over the ensemble. 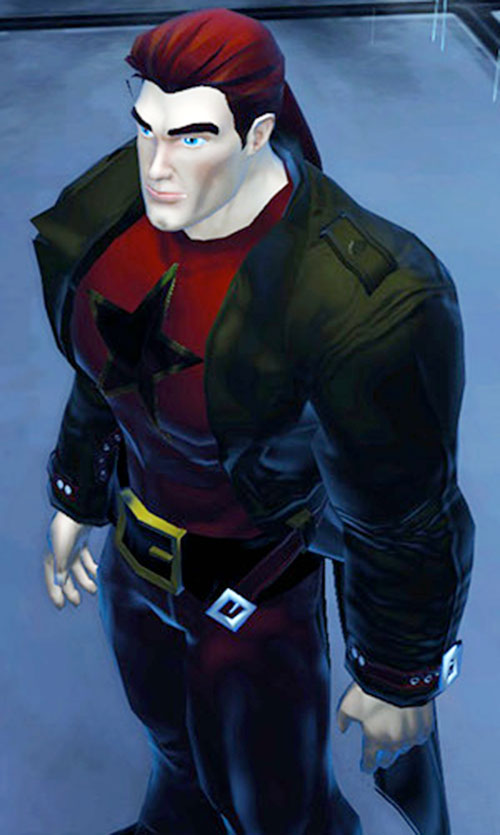 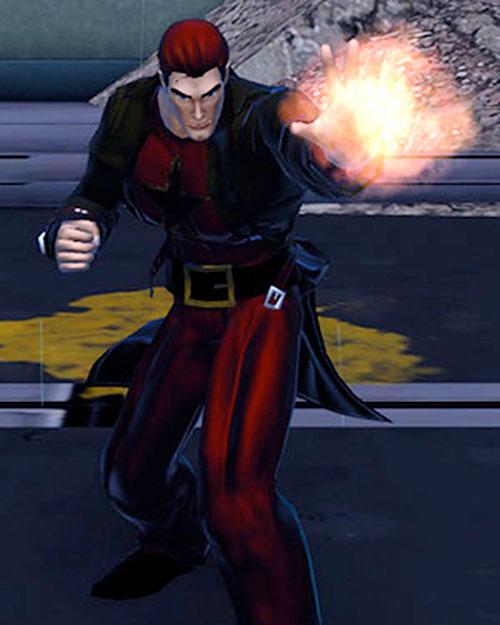