Left with nothing but her angel, the young woman set fire to the cabin and left. Inspecting the wreckage, the police concluded that Julia had accidentally drowned, and that Julia’s mother had been mauled to death by one of the few remaining bears in the area.

However, the cops on the scene were aware that the corpse of the thing that Dancy shot was no bear.

The Milligan PD arrested her. With two dead and Dancy raving something out of Beowulf and having viciously assaulted an officer she identified as a “monster”, they had her institutionalised in Tallahassee. It didn’t go well. She attacked other patients and then was put on high security watch, for suicide-risk or genuinely dangerous patients.

Flammarion escaped nonetheless, biting off an orderly’s finger and keeping it as a memento. According to her he too was a disguised monster.

The angel sent Dancy to Bainbridge, and specifically to the ruin of a forsaken bayou church inhabited by dead shadow creatures. The shadows had been drawn there by an ancient, nameless swamp creature whom Flammarion killed before she burned the church.

According the ghost of Julia Flammarion, the creature was a Nephilim . But that assertion was probably wrong. It probably was the same kind of creature that attacked the Flammarion cabin, though.

After Bainbridge, Dancy was sent to a service station. Its owner was a minor warlock who kept a captured werepanther in a cage. According to a latter retelling by Dancy, the caged woman had spurned the warlock, who cursed her into becoming a shapeshifter and losing her mind.

The old man tried to kill Flammarion since he had heard about the Bainbridge hit. But she killed him instead, then burned the bestial werepanther to death along with the gas station.

Dancy Flammarion was next sent to kill the Gynander in Waycross. This was a terrible creature using the hollowed-out skin of men and dogs as a substitute body. She also killed an immortal woman named Sinethella, who had been wanting to die. Sinethella gave her cryptic visions as her reward.

Near Savannah, Flammarion was kidnapped by three demons who took her to town, to sell her to a house of cannibal women. This time Dancy did not have instructions from her angel. But she guessed what her mission was when a strange boy came to the house with a magical bottle, to force somebody to tell him what was inside his bottle.

Flammarion destroyed him and his deadly artefact then left, her job done.

Dancy was then sent by her angel to meet a young palaeontologist named Chance Matthews in Birmingham, Alabama. A few years before Chance, her ex-boyfriend Deacon and her friend Elise had stumbled upon an ancient supernatural presence underneath Red Mountain , which had left them shocked.

Elise eventually killed herself under psychic pressure. This loss further damaged the alcoholic Deacon and the somewhat depressive Chance.

Dancy recruited Chance, Deacon and Deacon’s girlfriend Sadie. She did so by demonstrating that she knew about what was under Red Mountain, the palaeontological research of Chance’s grandparents, and Elise’s death. Though she preferred working alone, the young albino had no clear notion of how this all fitted together and needed their help.

However, she failed to convince the other three. Dancy ended up going to the bad place in Red Mountain alone.

Flammarion was apparently killed by the creatures there. But Matthews later invaded the specific Red Mountain tunnel leading to the ancient presence. Before she could physically destroy the tunnel, Chance was drowned into frozen and disjointed time to stop her. Thus, she apparently experienced time like the creatures there did.

In part thanks to her wounded sanity after her trials, Chance Matthews somehow used this to fix the past. She retconned  herself into having saved Elise from suicide, then into never having entered Red Mountain in the first place.

Chance Matthews thus wound back her life back to the point of divergence. That was several years in the past, when she decided not to enter Red Mountain. She dimly remembered what had happened in what was now the future, and in particular Dancy Flammarion. As to Dancy, she apparently remembered everything from the future that Chance retconned away.

Chance visited Dancy at the Tallahassee institution to try to understand why she kept dreaming of her. But Flammarion was more damaged than ever, presumably due to the shock of remembering her death.

One assumes that she escaped from the asylum shortly after, and that all the events proceeded as before. However she never actually met Chance Matthews, who now had never stirred what lies under Red Mountain with her fateful visit.

The wolves will chase you by the pale moonlight

During her travels, Dancy stumbled upon a troll living under a bridge. Though it was fairly friendly and talked a bit about Tir Na NÓg , the troll eventually admitted to occasionally eating people. Thus, Dancy realised that she had been sent to kill him – which she did.

In South Carolina, Dancy was confronted by Maisie – a young female werewolf who had been sent to kill her. Flammarion stalled using riddles. Dancy ended up killing the girl in self-defense, but also because she was an homicidal monster. And Dancy wanted to recover some Flammarion mementos that the werewolf had brought to taunt her.

During this encounter Dancy, fed up with her angel never-ending homicidal rage, broke the rules by telling Maisie the angel’s name. It thus seemingly abandoned her, marking the beginning of a new era in Flammarion’s blood-soaked career.

Or maybe she’s a mental patient in an almost constant and extraordinarily severe state of psychotic fugue, hallucinating the bulk of her adventures and murdering random people. And maybe her “angel” is simply a clumsy expression of her adolescent sexuality. Her delirium is based on the few books that were in the Flammarion cabin and that she knows by heart. 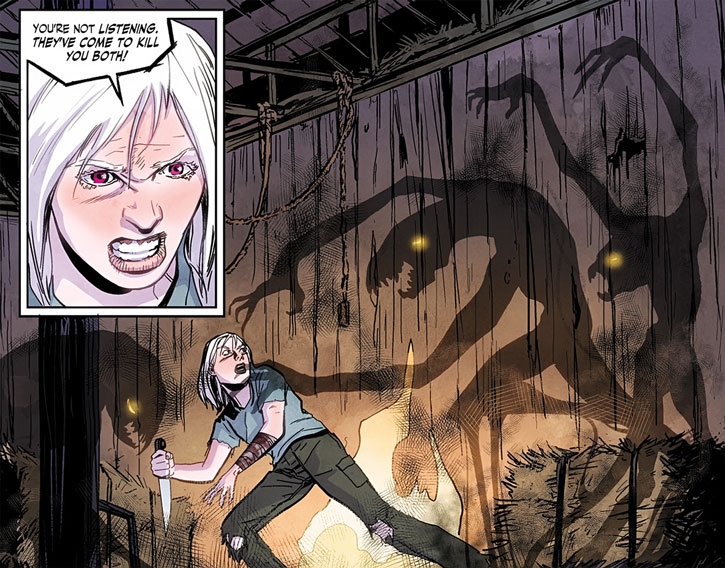 Still, plenty of details do not add up. In particular she demonstrated to outside witnesses that she knew things that were physically impossible for her to know.

An intermediate hypothesis is that she insane, hallucinating and paranoid. But the majority of the events she is interpreting as something out of Beowulf or the Bible are actual supernatural happenstances in a Lovecraftian world.

That the setting has a degree of supernatural activity seems well-established outside of Dancy’s frame of reference. One of the characters in Threshold, Deacon Silvey, has psychometric abilities that ruined his life and made him an alcoholic. He was even strong-armed by sceptical Atlanta PD detective into closing cold cases, and was apparently 100% successful.

A small, skinny, underfed albino 16-year-old. She is clearly an unwashed drifter, wearing faded and smelly clothing (some of which belonged to her mother) and carrying her stuff in a duffel bag.

If she’s outside by day, she’ll wear whatever sunglasses she can find and a large umbrella to protect herself from the sun. She’ll keep the open umbrella taped to her duffel bag if she can.

Flammarion presumably has a Floridan bayou accent. On some rare occasions, her voice has sounded impossibly old for her body – as if it were her grandmother speaking. Her more recent adventures has her speak with typical Deep South rural diction. Presumably she adopted the way people around her speak.

Her seraph is no blond dove-winged cherub. It has four wings, four conjoined faces, eyes of sapphire and ember, a black tattered robe and a flaming sword. Molten lead drips from its lips when it “talks”, though no one but Dancy can perceive it. It doesn’t smell like anything real.

Dancy is a loner and an outsider. She comes from a minuscule corner of the world that is full of danger, superstition and evil magic. She is also a creature of twilight — being out in the sun requires protection, and being out at night is too dangerous — and a drifter at the margins. 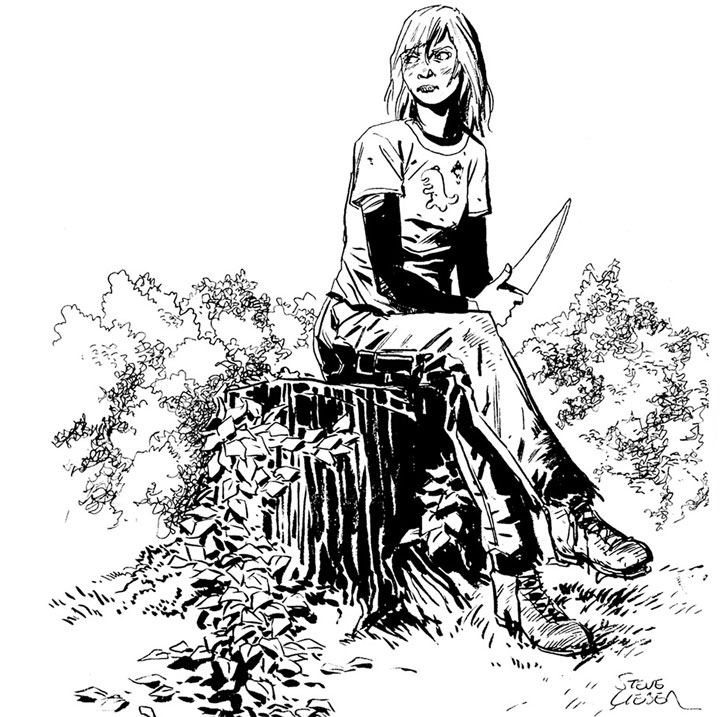 Much of her life experience is steeped in swamp lore (focusing on avoiding the natural, manmade and supernatural dangers therein) and Christian hedge magic to ward off bad luck and ailments. Exemples of the latter include praying to St. George and St. Anthony the Abbot to protect her skin from the sun – say, by sending in clouds.

She is a blunt, practical, self-reliant girl from a dirt-poor and isolated area. Flammarion speaks her mind in all circumstances and comes across as spooky, almost fearless, murderously intense and deranged. What she says often has a poetic slant, because she’s quoting or paraphrasing from Beowulf, the Bible or Longfellow.

Her existence is dominated by voices. A lot of stuff speaks to her, and she can never be too sure whether it’s actual speech or something she hears in her head. On the other hand she doesn’t talk to people much so she comes across as stiff, creepy and in-your-face when she does.

Being just 16 and having had a very isolated life, she still has some childlike interests (especially her sense of curiosity and her way to ask questions about everything), but not mannerisms.

Though she acts fearlessly, she is actually scared. Dancy is aware that her life is severely screwed up – and that she may be completely insane. But while it is harrowing, she doesn’t let it hinder her when she’s in danger.

Flammarion sees herself as a good Christian girl. She will either act ethically or try to rationalise away her actions. Say, she’ll insist that stealing just what she needs to survive isn’t really stealing. She has been sarcastically called a little Joan of Arc, and there are indeed similarities. Dancy doesn’t like it when other people blaspheme.

Dancy is a horror character, not an action heroine or a super-heroine. Most of the time she is an odd variant on a typical Final Girl character archetype, including chastity and unexpectedly turning the monster’s weapon against them.

She isn’t in control of much and is just a courageous girl doing what she can in an unlikeable, broken down, unknowable milieu.

However, she is *also* the Supernatural Slasher archetype (like Michael Myers in Halloween movies), albeit as a kind of, sort of good guy serial killer – and her Slasher nature only occurs in spurts.

During this era Dancy isn’t a straight inversion of the trope like Buffy Summers is. She’s still mostly a victim, and arguably a monster, rather than a heroine.

“I can see monsters. The children of Cain.”

“Someday there will be an end to this. The horrors and the blood, the doubt and pain, the cleansing fires and the killing.”

“I know exactly what is coming. I do.”

“Nobody can save me. Maybe once, a long, long time ago, but no one can save me now. That’s not the way this story ends. I don’t have a home. I go where the angel tells me to go, and he told me to come here. He said there was something terrible hiding out there, something even the birds of the air and the beasts of the field are scared of, something I have to stop.”

“It’s not safe. You won’t be safe here all by yourself, not when they come.”

“I am fire and metal wings. I am all the burning swords, and I’m trying to forget you.”

Connections:
The angel (Low – information only). 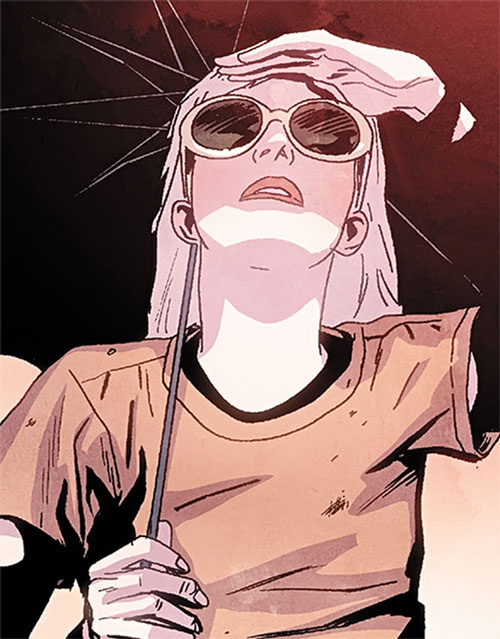