As bits and pieces of his memory return, the abilities Dane acquired from the Gen-Factor  have begun to resurface in brief, erratic intervals.

The symbiote  seems to be increasing the raw potential of Dane’s psionics . Therefore, his current limits are uncertain at best. He also seems to enjoy a deeper level of communication with the symbiote than the others.

Dane was born in Battle Creek, MI. After tours as a Green Beret, he was transferred to IO’s Team Seven from the Special Forces Operational Detachment, a.k.a. Delta Force.

Dane participated to many Team 7 missions, under the call sign Arclight. He distinguished himself as the one with the most combat experience. Jackson was exposed to the Gen Factor along with the others. And just like the others, he manifested powerful psionic abilities.

After Craven’s attempt to nuke Team 7 to test their powers, Dane joined the others in hiding from IO. During Team 7’s later mission into Southeast Asia to destroy a weapons dump, Dane and Cray stood against a hostile troop of Russian soldiers.

It was during this fight that Dane brought Cray back to life after he had been mortally wounded. However, Dane then faced a powerful Russian psi whose attack left Dane in a vegetative state.

Dane was brought back to IO for examination. He was moved to the highly classified Level 9 of the IO HQ. Level 9 was where all the previous test subjects and failures had been hidden away.

Sensing Dane’s psionic strength, the Level 9 inhabitants decided to use his body as a weapon for their vengeance against Craven. The rest of Team 7 was called in to help stop the attack and managed to free Dane from their control.

During the next few years Dane finished healing, though he still suffered from some memory loss. His patriotism eventually brought him back into government service. His first assignment was as a member of the SOG, and then as the head of a new version of Team 7.

His lauded military record gave Dane great latitude in recruitment. He could hand-pick from every service what he considered to be the best of the next generation special forces personnel. This version of Team 7, codenamed “Wetworks”, served IO for several years. Then they too were betrayed by Craven.

While on a suicide mission, they encountered resistance from vampires. Then they were exposed to the golden symbiotes they now live with. Learning that they had been set up by Craven, Dane and his team went AWOL.

They entered the patronage of industrialist Armand Waering. Dane’s team would act as a strike force against the Vampire Nation in return for Waering’s financial support.

During their second encounter with the Vampire Nation, the team learned that the vampires had the ability to control the symbiotes to a certain extent. Both Crossbones and Flattop died as a result. Mother One’s responsibility for their deaths is still a secret as of this writing.

Since then the team has struggled in many ways. One big issue were the changes brought by the symbiotes. Dozer swelled up to an overly muscular form, Grail has become encased in a field of destructive energy, Jester has recently been proven to have been killed by his symbiote which in turn then absorbed his soul, and Pilgrim vanished without a trace for a while.

Yet through all of these hardships, Dane kept the team together. Now with the return of Pilgrim and Dozer learning to better control his form, Dane has a full team again with a new addition in Blackbird, Pilgrim’s brother.

Most recently, Dane was challenged to a fight by the Vampire Queen. This not only resulted in both of them being heavily injured but in Dane regaining the memories of his past encounters with her. It has also been revealed that Waering was a werewolf, using the Wetworks team as his weapon in the ages-long war against the Vampire Nation.

Dane is even more massive and muscular than Deathblow. He was the biggest member of Team 7, which often meant support weapon duty for him. As a Team 7 member he wore a full beard (his hair were redder then, too) and often sported a jungle hat. He’s now clean-shaven and more spartan.

Dane has always been a model soldier… until Team 7 was nuked by Craven. Cole Cash’s rebellion, and being betrayed by his CoC, had a deep effect on him. It made him stronger.

He’s still impressively calm under fire, and unbelievably aggressive if need be. But Dane now strongly believes in protecting his team and collateral elements, such as civvies. He’s thus particularly careful about avoiding unnecessary damage.

Dane has always been a taciturn and meek man. He just isn’t much interested in the general hellraising performed by his comrades when off duty. During his Team 7, he was very big on teamwork, often reminding his mates that they worked as a unit. He was particularly close to to then savage Deathblow, and was often called upon to help control him.

Dane is known as a compassionate, yet battle-savvy field commander. He works through personal respect as much as with rank. Personnel under his command always trust his judgement implicitly.

Bonuses and Limitations:
Mind Blast, Mind Probe, and Telepathy all suffer from Catastrophic Burnout and are Fatiguing.

By Alex Hunter and Sébastien Andrivet. 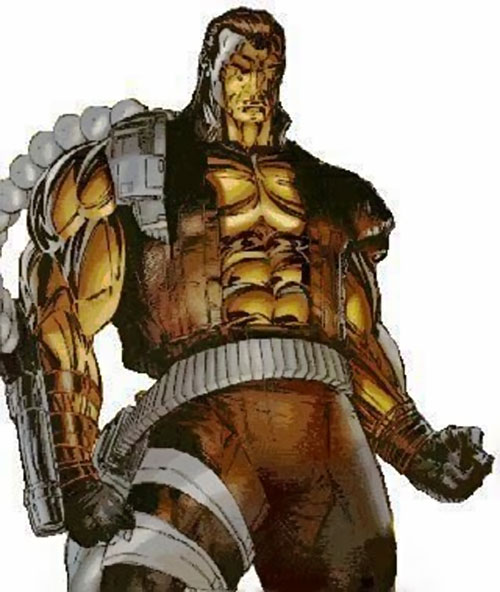 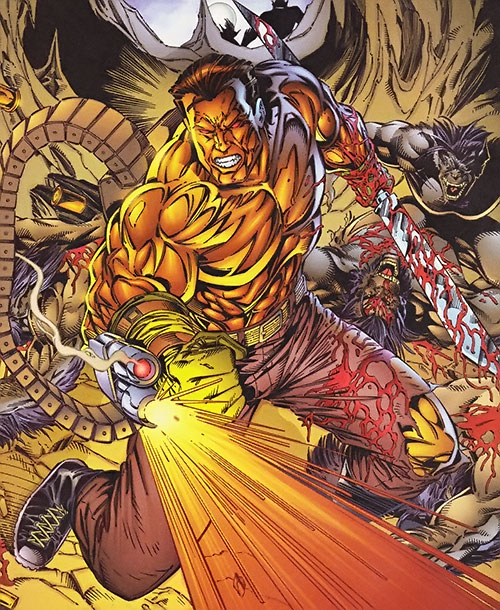