This writeup covers the movies only; not the comics, video game, or the animated T.V. series based on these films.

Daniel LaRusso is a karate student with a highly skilled teacher, Mr. Miyagi. Miyagi’s karate focuses on defense, avoiding attacks, and counterstriking. Miyagi has an unusual teaching style weaving his karate instruction into every aspect of Daniel’s life.

Daniel is agile enough to keep a soccer ball up using only his knees and feet. Otherwise, he is a fairly average young man in transition between high school and college.

Daniel and his mother traveled by car from Newark, New Jersey to Los Angeles, California in September of 1984. Daniel’s mother moved them to the Southern Seas apartment complex in California. The maintenance man for the apartments was an eccentric old Okinawan man named Miyagi.

Upon arriving Daniel made a quick friend in Eddie Fernandez who invited him to a beach party where he met Ali Mills. Ali’s jealous ex-boyfriend Johnny Lawrence came to make trouble for Daniel. Daniel fought back but was no match for the karate-trained Johnny. Daniel was humiliated and left face down on the sand.

The Cobra Kai dojo is ran by John Kreese an ex-military man, part of the Special Forces in Việt Nam. A hard man who believes you fight to destroy your enemy. Mercy is for the weak. So, he trains his students to be ever combat ready. His top student is Johnny Lawrence, followed by Bobby Brown, other friends of Johnny.

Other members of the dojo are Tommy, Dutch, and Jimmy. There are maybe 20 students total. 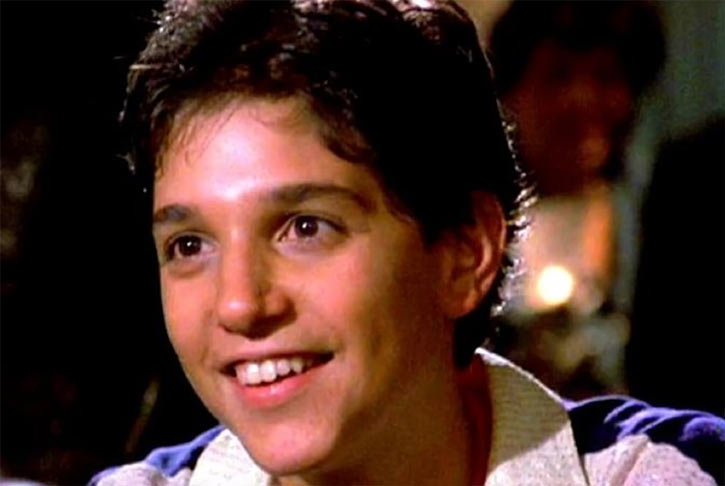 Daniel began a cycle of: trying to learn karate from a book or visiting a dojo, getting jumped by Johnny and his friends, and trying to hide his injuries. This culminated in a beat down that was only stopped when Mr. Miyagi intervened and single-handedly defeated all the Cobra Kais with his superior martial skills.

Miyagi agreed to go with Daniel to the Cobra Kai dojo to resolve the on-going conflict. Miyagi would speak with the sensei about his student’s dishonorable actions. To Miyagi’s surprise, the students were doing exactly as they were instructed. Sensei John Kreese was the problem.

Miyagi convinced Kreese to allow Daniel two months to train requesting the bullying cease until then. Daniel would compete in the under-18 All-Valley karate tournament.

Wax on, wax off

Miyagi and Daniel drove to Miyagi’s secluded home where he would train. Daniel spent his first day of training washing and waxing all of Mr. Miyagi’s cars. The second day was spent sanding the wooden walkways of Miyagi’s backyard garden. Daniel liked Mr. Miyagi but couldn’t help feeling used.

The third day, Daniel painted the fence, both sides. The fourth, he painted Mr. Miyagi’s house. All he did with silence and growing frustration. 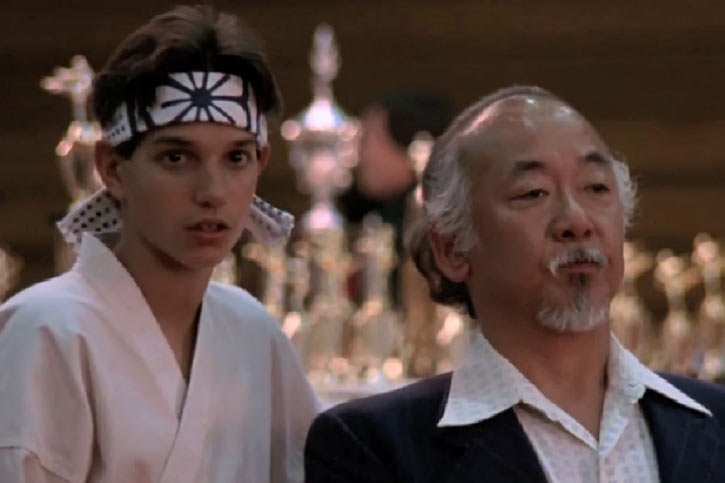 Ready to quit, Daniel confronted Mr. Miyagi. Miyagi proved he was in fact teaching Daniel karate the whole time. Miyagi taught Daniel defensive blocks. Balance would be his next lesson.

Daniel began spending more time with Mr. Miyagi and his karate training. One night, he learned of Miyagi’s time in the military and the death of Miyagi’s wife and son. Miyagi celebrates his anniversary with hard liquor; drinking until he passes out.

On Daniel’s birthday, he’d just earned his drivers’ license and received two gifts from Miyagi. One gift was a karate gi with a bonsai tree patch on the back, sewn by Miyagi’s late wife, and second was his choice of Miyagi’s classic cars.

Miyagi entered Daniel in the tournament as a black belt. Daniel defeated many opponents before facing his nemesis Johnny in the finals. Daniel with an injured leg employed the unorthodox crane kick to finish Johnny and win the tournament. He won the respect of everyone, even Johnny.

After the tournament, Miyagi humiliated Kreese in front of his students by defeating him then showing him mercy. The opposite of what Kreese himself had taught his students.

Six months later, Ali and Daniel were no longer a couple. Miyagi received a letter informing him about his father’s illness and imminent death. Daniel would join Miyagi on a trip to Okinawa. 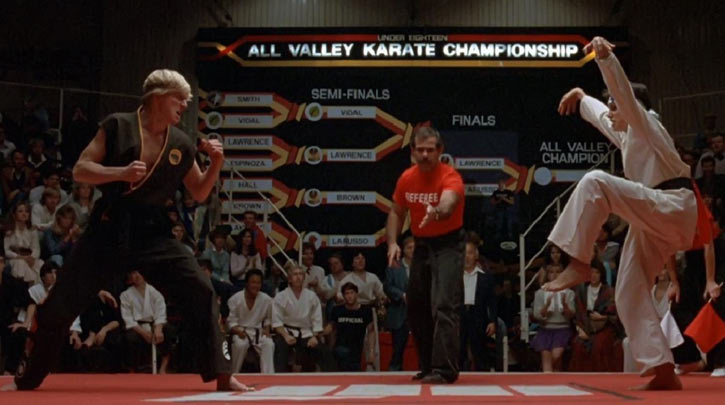 Miyagi had left Okinawa at a young age and hadn’t been back. He told Daniel why. Miyagi defied custom and demanded marriage to a girl, Yukie, who was already arranged to marry his best friend, Sato. Dishonored, Sato challenged Miyagi to a fight to the death. Instead of fighting his best friend, Miyagi left Okinawa never meaning to return.

After landing, Miyagi and Daniel had a challenging meeting with Miyagi’s old friend Sato and his nephew Chozen. They eventually found Miyagi’s father. Daniel met Kumiko, Yukie’s niece. Daniel and Kumiko were mutually attracted to one another. Daniel would learn about the “bone dance” for the festival of the dead from her.

Remember, best block, no be there

Daniel learned the drum technique, another Miyagi family karate secret. Daniel, though he tried to avoid it, came into conflict with Chozen at every turn. Daniel made Chozen look foolish on more than one occasion. 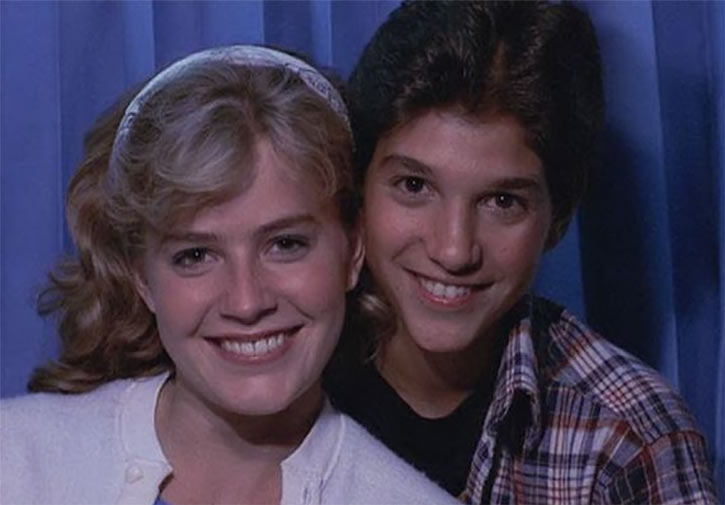 A typhoon came towards the island; everyone took shelter in an old military pillbox. Daniel and Miyagi went out to rescue those who needed help. They met Chozen who told them Sato was dead. When they eventually found him, Sato wasn’t dead only trapped under a large beam. Miyagi used Karate to chop the beam in two and rescued his old friend. Daniel heroically saved a young girl.

Chozen, too afraid to help Daniel, was disgraced before everyone including Sato. He ran away into the night.

At the festival, Chozen returned for vengeance on Daniel. Chozen fought Daniel in a fight to the death. Daniel overcame Chozen using the drum technique but would not kill him.

Silver put his plan in motion. He gathered a couple of teen-toughs, Snake and Dennis. Then he added the services of the “karate bad boy” Mike Barnes. Silver gathered intel on both Miyagi and Daniel then used what he learned to earn their trust. At the same time he sent Barnes, Snake, and Dennis to harass Daniel. 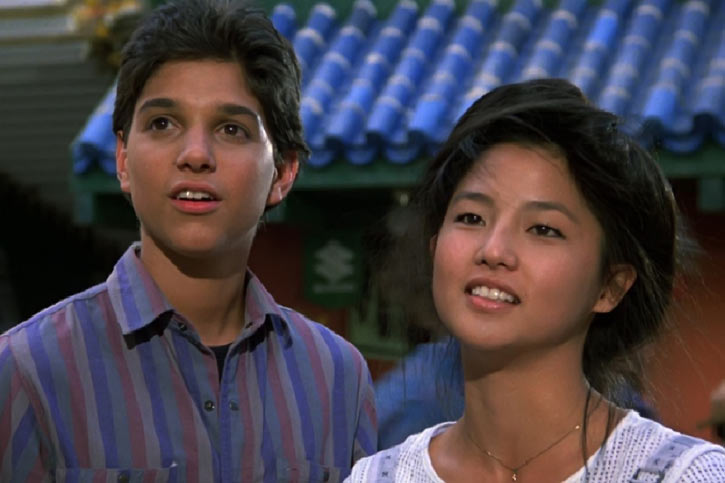 Daniel moved in with Mr. Miyagi, his mother moved back to New Jersey to take care of his Uncle Louie. Against Miyagi’s wishes, Daniel used his college money to lease a building fulfilling Miyagi’s dream of owning a bonsai shop.

Since Daniel was Champion of the All-Valley tournament he was expected to come back and defend his title. Miyagi was against it and refused to train him for this purpose. Daniel eventually agreed with Miyagi but was later compelled to sign by Barnes and his buddies.

If a man can’t stand, he can’t fight

Daniel became good friends with a girl in a neighboring shop, Jessica Andrews. Since Miyagi wouldn’t help him get ready for the tournament Jessica began running with him to build up his wind. Mr. Silver conveniently arrived and offered to train Daniel at the old Cobra Kai dojo. 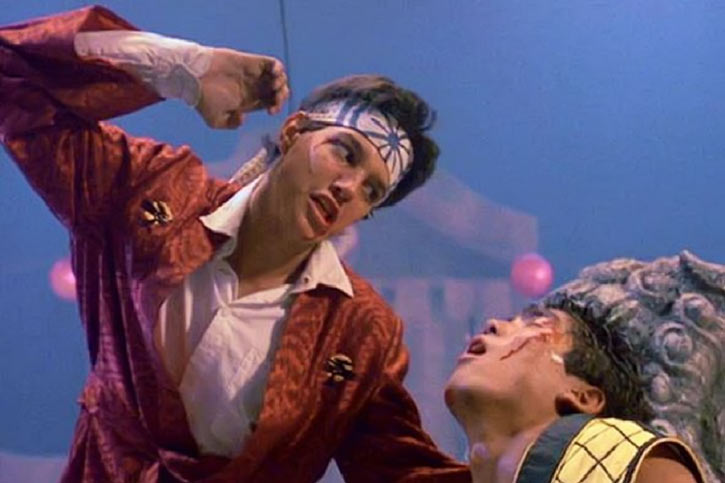 Daniel eventually agreed to be trained by Silver but didn’t want Miyagi to know. Mr. Silver taught him to strike hard and fast using a much more aggressive fighting style. When Daniel reacted by punching first and thinking later at a dance he realized this fighting style was not for him. He went to Silver to tell him in person he was quitting and why.

However, Daniel found it isn’t so easy to quit. Silver’s plan is revealed. Mike Barnes and John Kreese reveal themselves and begin to beat and torment Daniel. Miyagi came to put an end to it. When they heard Silver’s plan to revitalize the Cobra Kai way of karate, Miyagi agreed to train Daniel for the tournament.

Daniel would fight only the last match of the tournament and it would be against Mike Barnes!

Daniel LaRusso is a lanky, teenage boy. His hair is worn fairly long in a late 1970’s feathered style. He wears a red wind-breaker which was popular for the early 1980’s. As he grew in age he seemed to gain a gangly walk that made him look clumsy.

When frustrated Daniel throws fits and takes out his frustration on whatever inanimate thing is a convenient target; be it his new school or his bike.

Daniel had some interest in karate even before meeting Mr. Miyagi but it was the need to defend himself that drove him to learn it quickly. Over time, Daniel came to truly love the art. He remains focused on his training even though his life seems ever in turmoil.

Daniel is quite lucky in the love department. He easily attracts unattached pretty girls.

Daniel: “Well you know what goes around comes around.”
(Later after pranking Johnny) “It’s coming around !”

“Mr. Miyagi you’re more important than anything to me. I mean, you know, When I need you you’re always there for me.” 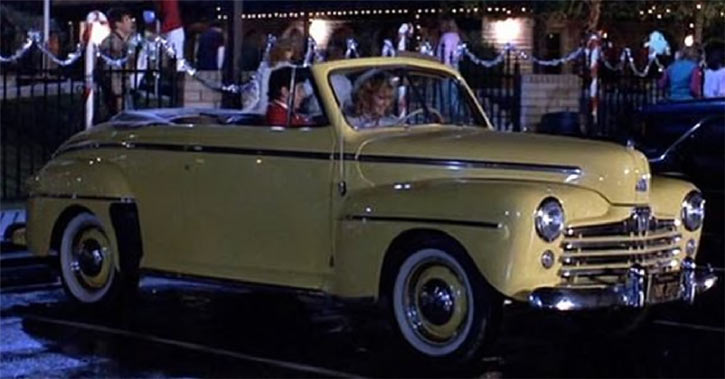 “I was absent the day they taught graceful.”

(Daniel’s new friend met Mr. Miyagi)
Jessica: “He doesn’t really look like the karate teacher type.”
Daniel: “Well, he doesn’t act like it too much either. Half the time he teaches me stuff I don’t even know what I’m being taught.”
Jessica: “What do you mean ?”
Daniel: “It’s like that vase you were making this morning, right ? He’ll make a whole karate lesson out of that.”

It could be interesting to have Daniel’s Martial Artist skill noticed by a martial arts hero or villain. Perhaps they are suspicious that Daniel is the secret identity of their nemesis.

Daniel and Mr. Miyagi could help a PC learn karate. This would be especially fun if the player hasn’t seen the movie… very unlikely, but hey.

A 299 points Character (without equipment).

Daniel may only use the Unpredictable Style Schtick after he’s trained at a new technique such as the Crane Technique. For a single Phase, Daniel can impose a -1CS Penalty to a melee opponent’s AV or OV. It may only be used once per adventure, so choose wisely!

Daniel is a novice karate student when he comes from New Jersey in Karate Kid with hardly any real skill at all. If anything he has a Martial Artist: 01, possibly with only subskills. By the end of Karate Kid, he has his current skill level except Martial Artist (EV): 02.

Daniel broke 6 pieces of ice when bigger guys could only get through one or two. Since he used EV 03 and Miyagi was there to boost him with HPs to the 05-06 range, the ice was no problem.

Karate Kid III, Daniel began training with Terry Silver who completely changed his fighting style. At this point he lost his high defense and techniques to focus on speed and damage. Before the tournament he went back to Miyagi for more training and returned to his normal skill levels.

Miyagi’s karate style is defensive; the breakdown of Martial Artist subskills is representative of what is shown in the films. Others may disagree with this breakdown suggesting Daniel has the full Martial Artist skill at equal measure. As an option GMs may wish to simply go with Martial Artist: 04. 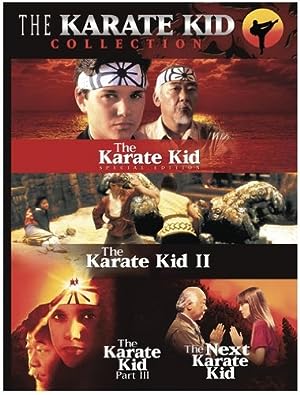 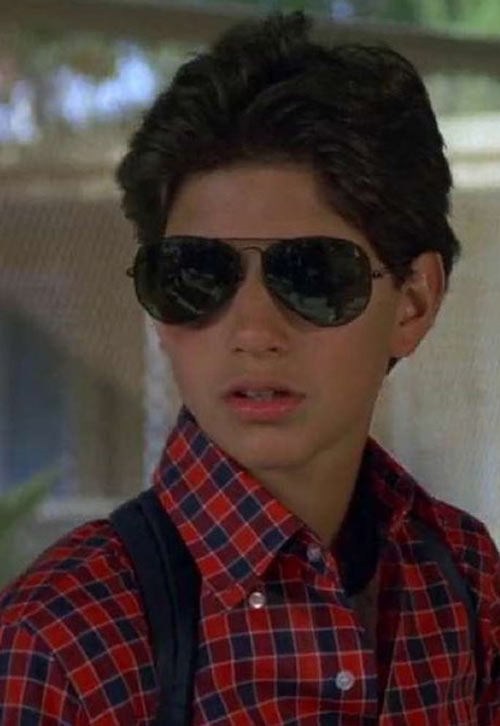 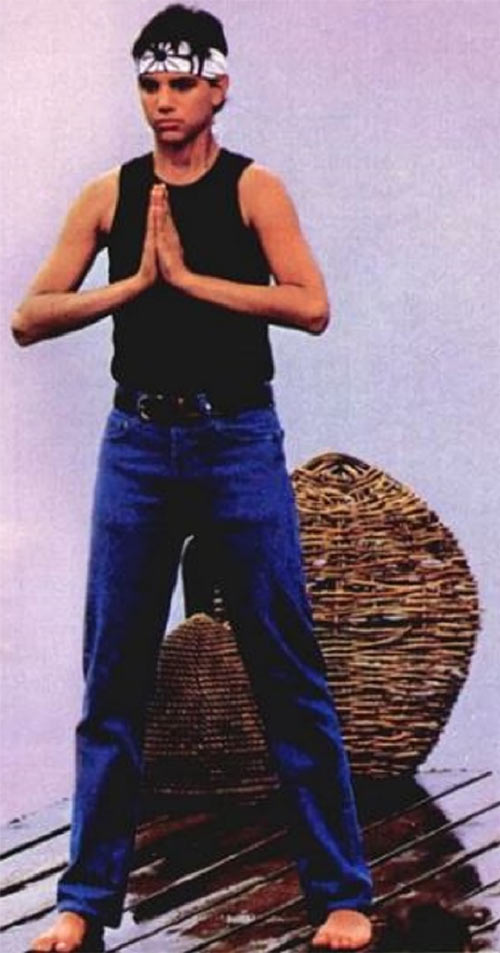 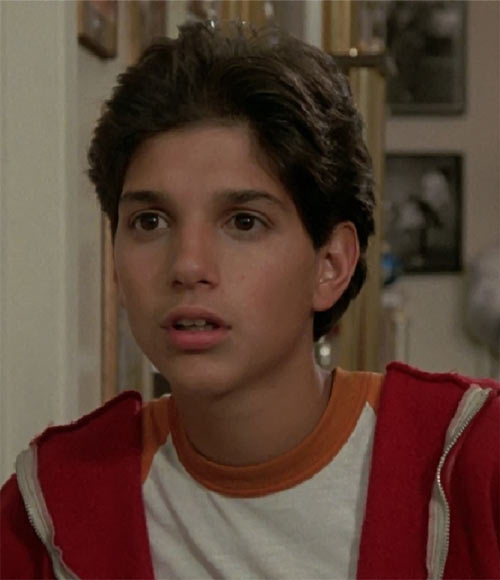 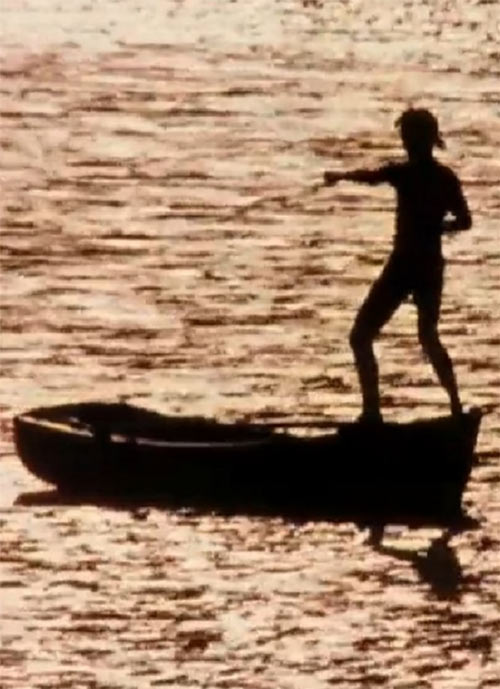