DC’s Who’s Who ’s cute sheet on Danny does a good job at explaining who Danny is, so I won’t repeat the info here. Danny is a transvestite street. That is, he has lots of macho type stores, but they are all decorated with frilly, flowers, pink hearts and so on.

His command of Palare , a gay idiom of the 1950’s, suggests that he might be gay. However, since the sexuality of sapient streets is a red button topic on the Internet, I won’t comment about it.

Danny is the nicest street you’re ever likely to encounter. It seems that having happy, eccentric people in him makes him happy. Danny picks up many vagrant and eccentrics, including Doctor 9, Uncle Monty, Flex Mentallo and of course the Doom Patrol.

Everything in him looks like it’s been designed by a sensitive, flamboyantly gay interior decorator. There are lots of Toy Story-like living toys, poetic or artistic posters (including a few anti-Nixon  ones), the police station is full of English policemen automates playing with jackpots, etc.

Since Danny can regrow itself and change its architecture, YMMV. It apparently always has had its famous Perpetual Cabaret, with a lot of queer, fun music hall acts. Oh, and Danny is more “real” than most of the surrounding world. In TORG  terms, he has more possibilities.

I have no idea of how many people live on Danny the Street at any given time. Perhaps 100 or more. Danny apparently can feed them all.

Danny spend a lot of his time traveling around and enjoying itself. He especially likes major cities with vital queer communities, such as Berlin, Paris or San Francisco. He knows some strange places that are not on the map, and might be able to cross the dimensions. I suspect him of knowing every single square inch on this planet.

Dancing in the streets

Danny loves everyone and everything. He calls most everyone “dear” or “love”, and is always cheerful. He adores visitors, and thinks having a parade walking in him is divine. Danny can become violent, but getting him to be so is tough. And he’ll never kill or grievously hurt anybody.

Danny is really the entire world. Or once was. Because once the world was marvelous, and frightening, and strange. Everything was alive and significant. It was a land of beauty and adventure. Then it slowly stopped to be so and became mundane. Only Danny remained, the last truly magical place. “Traveling the Earth as a reminder of what had been and could be again”.

Danny finally won. He spread across the entire world, turning it in “a world of dreams, and world of love and strangeness and charm”. Becoming Danny the World.

Danny the World now exists in a parallel dimension. It is “a world of infinite novelty, where it’s impossible to visit the same place twice, unless you want to”. But Danny still sends himself as a street in the DC world, being “the tunnel through which the lost and heartsick” can reach Danny the World.

Bonuses and Limitations:
Animate objects only on itself (-2). 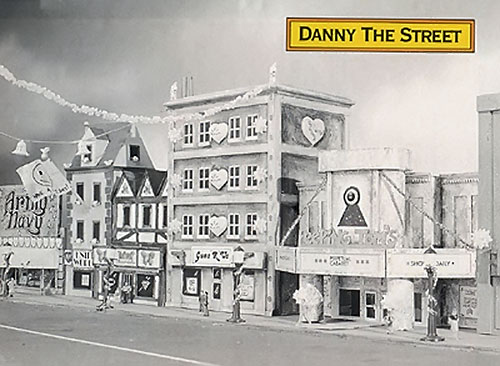