Samuel Fisk does not seem to possess any special skill. However he has huge amounts of money and influence, especially in New York City, the traditional stronghold of the Fisk family.

Since Fisk seems to be in his late 30s and is the Kingpin’s grandson. Thus, it is possible that high-performance anagathics  have been available for some decades, as he shouldn’t be that young in that year.

Part of Fisk’s fortune and influence was used to buy a one-of-a-kind, cutting edge, extremely expensive suit of power armour. Fisk simply has to start moving for the suit to execute the move with superhuman power and accuracy. While the wearer is not particularly agile, in the suit he can accomplish tremendous feats of athleticism and acrobatics.

The armour plating can defeat gunfire and energy weapons fire.

The movements of the Daredevil 2099 suit can be rocket-assisted by thrusters, the main ones being along the forearms and the calves. With the thrusters precisely enhancing his movements or just providing a sudden acceleration, he can perform huge rocket-powered jumps, throw rocket-assisted punches and run at high speed.

Those actions leave white smoke behind from the rocket exhaust and, in most environments, the disturbed dust.

The suit may have other, unrevealed capabilities, such as night vision or, of course, a radar.

There are two handguns stored in compartments within the suit’s thighs. The guns are slaved to highly advanced targeting computers. Thus, while wearing the suit, Fisk practically never misses.

He also carries a replica of one of Daredevil’s billy clubs and insists on trying to use it. But the suit cannot help with the accuracy of this thrown weapon and Fisk has to use his own, mediocre, skill with it.

The back of the car also includes a panel in the roof and a launcher propelling Daredevil 2099 high in the air, over the rooftops. There his computer-assisted acrobatics and rocket-assisted speed can take over.

The past of Earth-2992 starts diverging when, at some point in the late XXth century or early XXIst century, the Mutant Registration Act is passed by the US government. This happens as technological means to nullify mutant abilities are discovered.

The X-Men start resisting and soon are joined by a large number of heroes and other superhumans to fight the government. The main, pitched battle takes place in front of the Baxter Building. By the end of the battle, the superhumans who had not been killed are either prisoners or deep in hiding.

At one point during the troubles, Wilson Fisk aka the Kingpin had his last fight with Daredevil. He achieved his greatest triumph by killing him.

By the year 2099 peace had long been re-established. With small Sentinels almost everywhere, crime was on a steep downward trend. The lack of super-heroes, super-villains and small-time crime left, of course, the coast wide open for organised criminals with vast wealth and influence – and none more so than the Kingpin and his descendants. 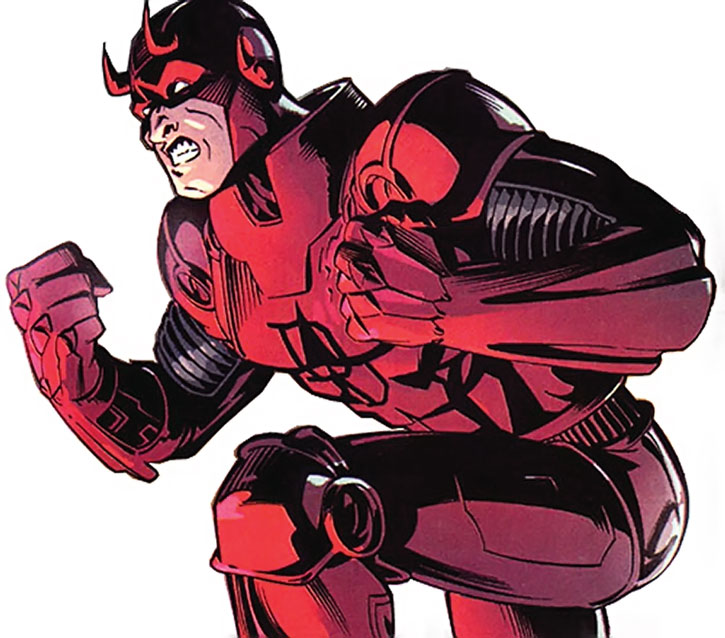 By 2099 the grandson of the Kingpin, Samuel Fisk, held tremendous power. However, through he ran the familial empire out of a strong sense of duty, he felt guilty and haunted by the numerous immoral and brutal orders he gave and acts he committed.

Unwilling to desert his duty as the Kingpin, Fisk started balancing things out by performing good deeds as… the new Daredevil. He felt that mimicking the uniform and motions of his grandfather’s nemesis helped atone for his life as a godfather.

However, his nightly patrol combined with his heavy daily schedule started wrecking his marriage. His guilt however was too strong, and he let things slide to the point where he was barely seeing his own son. Perhaps that was because he knew the boy would one day be the next Kingpin. His wife started seeing another man in a not-entirely-discreet fashion.

Given the fairly low level of crime, Daredevil 2099’s activities seem to have mostly been to counter minor, random street action such as muggings. He used his police band scanner and superior mobility to reach crime scenes before the police could. Fisk eventually started developing a small reputation on the street, which combined with the thanks from most victims helped balance his stressed psyche.

When he discovered his wife’s unfaithfulness, he let off steam (the famous Fisk temper) by assaulting and demolishing a Sentinel in hand-to-hand combat. Soon after that, he had his men deliver him his wife’s lover, whom he personally executed in full view of his lieutenants to maintain discipline.

Unlike both of his role-models, Samuel Fisk is not a physical, mental and spiritual giant of incredible talents and resolve. In fact, he seems to be an average guy who is not truly engaged or particularly competent by his ’job‘ as a corporate bigshot and crime lord.

He’s obviously bored and uneasy during key corporate meetings. Though his intelligence is above-average, it is not exceptional.

His guilt issues even make him a bit of a loser and ordinary schmoe, especially when it comes to his marriage. He was fighting with his wife and could see the situation hopelessly deteriorate. Yet he was trapped in his problems and did not have the skills or the willpower to properly communicate and find a smart way out of the problem.

He would just go out and be Daredevil to atone as much as he could, atone for everything… and have fun and feel physically powerful.

Samuel Fisk does have a dramatic feature, though – the Fisk temper. Like his ancestors he can, and does, suddenly become a stone-cold murderer, killing without hesitation, showing no mercy and occasionally flying into cold, deadly rages when frustrated. In those occasions, he can definitely evoke Michael Corleone … and keep the men in line, as they know they are dealing with the Kingpin.

“I never was able to overcome that Fisk temper.”

(As Daredevil) “Nobody moves – nobody gets hurt !

This character has but one appearance (and, technically, a one-panel appearance in a time-travel adventure in a somewhat obscure book), so there is by necessity a speculative character to his stats.

Source of Character: Daredevil 2099 #1. Note that Marvel has two distinct continuities in the year 2099 ; the “Marvel Knights 2099 continuity” is properly referenced as Earth-2992, the number being its Core Continuum Designation and not a chronological coordinate. 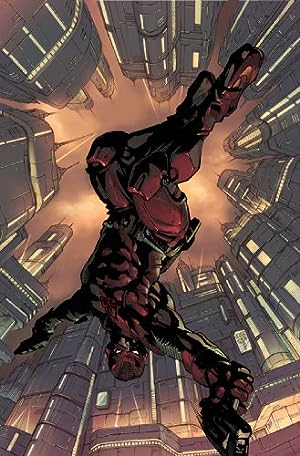 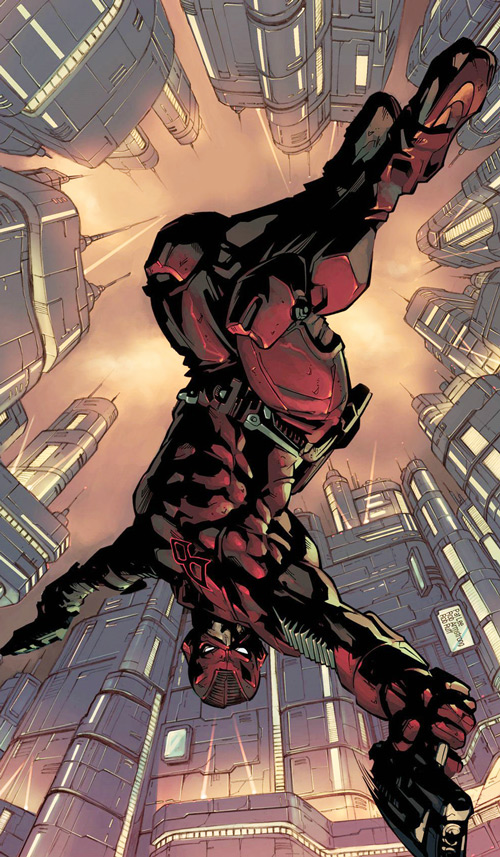 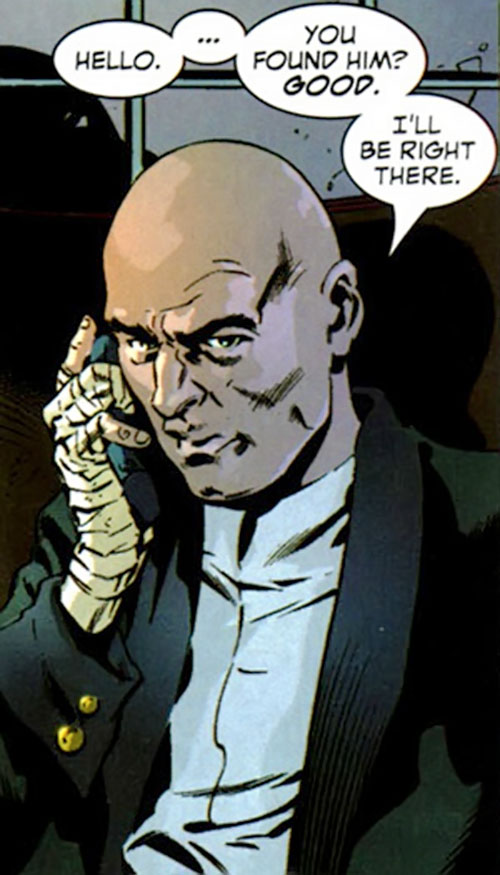 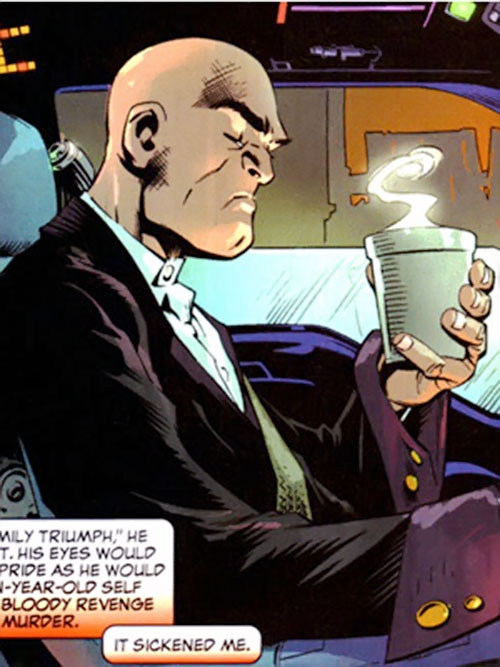