Daredevil (Matt Murdock) first appeared in 1964, in his own mag. But he was generally a B-list character, until major runs (starting with Frank Miller during the 1980s) pushed the boundaries of urban, street-level super-heroes adventures, comic book character development, and visual narration.

These notes are really, really old. Daredevil is a lynchpin character for street-level Marvel characters, so we had to come up with game values for him early on.

There’s also a (more modern) character profile for the Netflix version of Daredevil.

Daredevil’s senses are, with the exception of his absent sight, superhumanly developed, and he has one more sense : a 360 degrees radar “vision”. He can for instance :

With a perfect awareness of every moving and immobile object around him as well as incredible reflexes and agility, Daredevil can perform feats such as parrying bullets with his nightstick, ricochet his stick off three thugs and have it come back to his hand or perform acrobatics that would be difficult even for Nightwing. 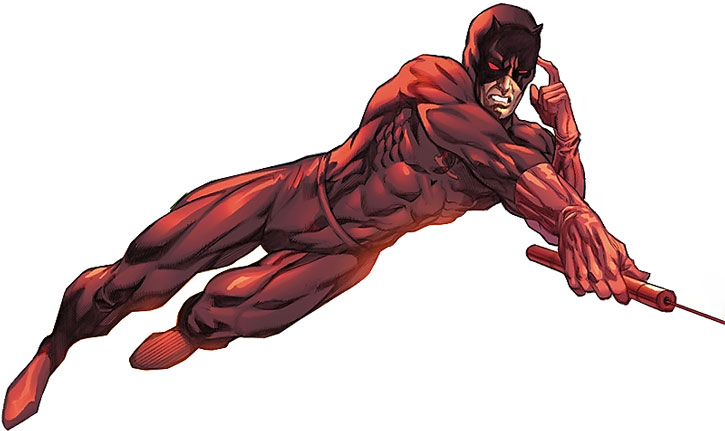 Daredevil was taught the martial arts by what is possibly the greatest martial artist of the previous generation. He’s a master in several ninjutsu-related disciplines and has integrated numerous others martial arts, including boxing, in his technique. Daredevil normally makes a point of using only non-lethal and appropriate force.

His analytical mind, smarts, lawyer training and remarkable streetwise — not to mention his uncanny senses — make him a remarkable detective.

Daredevil’s main “power”, however, is his dedication and lack of fear ; he’s been known to take on such vastly overpowered menaces such as the Hulk. While in many ways he is the archetypal “street-level hero”, he has a formidable ability to face the most harrowing problems without flinching, as Mephisto discovered to his dismay.

Matt Murdock is the son of a fighter: “Battlin’” Jack Murdock, a New York boxer who made his living in Hell’s Kitchen. A single parent, the elder Murdock took it upon himself to provide a better life for his son. As such, he began working as an enforcer for a local mobster to give Matt more than his winnings would allow.

However, he taught his son that fighting was not the answer to life’s problems and encouraged him to pursue his studies. Matt became a bookworm, mocked by his fellow students ; they teased him with the nickname “Daredevil.” 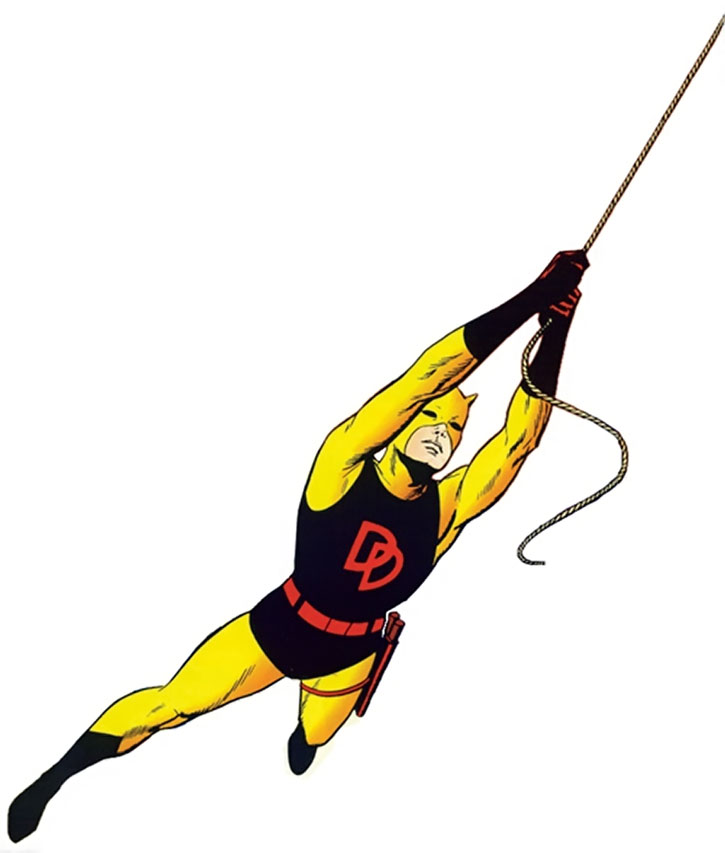 Afraid his father would be disappointed by his weakness, Matt trained himself in secret to stand up to the bullies at school. Even then, Matt was a hero at heart. Walking down the street, he noticed a blind man about to get hit by a truck. He ran in front of the braking vehicle, pushing the hapless victim out of the way.

But the youngster paid a stiff price for his selfless act : the truck was carrying radioactive waste, and some splashed out onto Matt’s eyes. Ironically, he was now as blind as the man he had saved from certain death.

At first devastated, Matt soon realized that the toxic sludge had mutagenically heightened his other four senses. But it was the warrior/teacher Stick who brought Matt full circle, coaching him in the use of his newly augmented senses and training him in the martial arts.

Matt attended Columbia University with Franklin “Foggy” Nelson, who became his lifelong friend. At Columbia, he met and fell in love with Elektra Natchios, daughter of a Greek ambassador. Matt first used his abilities to combat crime when he fought terrorists who had kidnapped Elektra and her father.

The ambassador was killed in the struggle, and an anguished Elektra left school. She would return to Matt’s life years later in a new role : costumed assassin. When Elektra fled, Matt threw himself into his law studies.

To finance his son’s college education, Jack Murdock — now past his prime as a boxer — struck a deal with promoter Roscoe Sweeney, alias the Fixer. But the mobsters killed Jack when he refused to throw a fight as instructed, and Matt sought justice in vain. Grief-stricken, he finished his studies.

After graduation, he and Nelson opened their own law office. Matt still was determined to bring his father’s killers to justice, but could see no way of doing so through ordinary legal means. He chose instead to adopt the guise of a costumed vigilante — Daredevil, the name used to taunt him years before. 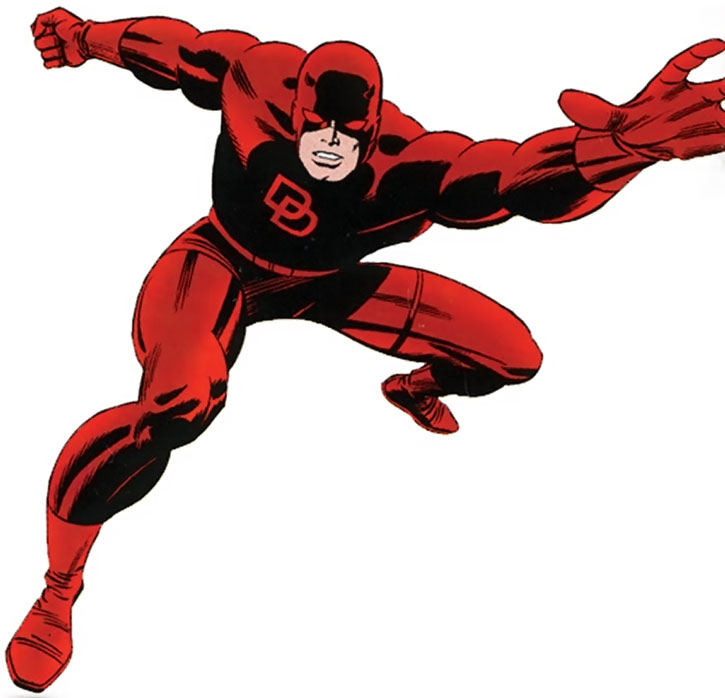 Matt gained a partner in his war on crime when Foggy tried Natasha Romanova, better known to the world as the Russian operative Black Widow, for criminal conduct. Natasha moved to San Francisco when the case concluded, and Matt joined her.

There, the two grew into more than just a crimefighting team : they became lovers. The affair ended when Matt returned to New York City and Natasha stayed in San Francisco. However, the two remain friends and frequent partners.

The Kingpin, the most powerful figure in East Coast organized crime, has proven to be Daredevil’s greatest adversary.

Matt ultimately came to oppose Elektra when she entered the Kingpin’s employ. As the gangster’s chief assassin, Elektra clashed repeatedly with her ex-flame. Finally, she was contracted to kill Foggy. When he recognized her, Elektra realized she could not carry out the contract and spared his life.

Soon after, the psychotic criminal Bullseye — who would become‘ Daredevil’s recurrent nemesis — determined that the only way for him to regain his status as the Kingpin’s chief assassin would be to kill Elektra. He impaled her on own sai, and she died in Matt’s arms.

The death and eventual resurrection of Elektra, the woman Matt still greatly loved, had a tremendous emotional effect on him that continues to this day.

A turning point in Daredevil’s crimefighting career came when a teen mother left her newborn daughter in his charge, claiming angels had told her he would keep the baby safe.

However, a mysterious elderly gentleman named Nicholas Macabes attempted to convince him the infant was the antichrist. He also succeeded in causing Daredevil’s estranged girlfriend, Karen Page, to believe she was dying from AIDS, the result of a promiscuous past. 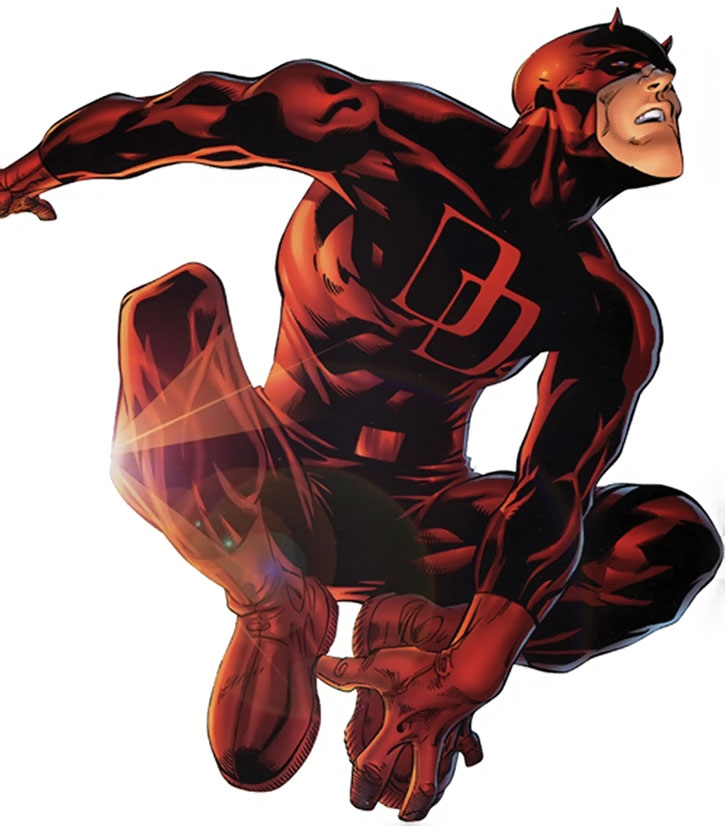 Macabes hired Bullseye to kidnap the baby — whom Matt had entrusted to his mother, Sister Margaret — and injure the child’s guardian devil. When Karen attempted to cover Sister Margaret’s escape with the baby, the assassin impaled her on Daredevil’s billy club.

Ultimately, Macabes revealed himself to be the illusion-casting super-villain Mysterio. He confessed he had targeted Daredevil because they both were “second-stringers.” When Daredevil defeated Mysterio and rescued the baby, the villain seemingly killed himself.

Like Elektra’s death, Karen’s murder is a heavy burden on Matt’s shoulders.

Matt Murdock dresses like you’d expect from a successful public lawyer – impeccable, nice clothes but nothing too ostentatious.

He always wears black shades and a white cane, of course.

Daredevil is a truly Christian superhero, motivated by charity and love for the people. One of the main themes in his life is sacrifice. He can be viewed as a modern saint, walking among the downtrodden and sharing his coat (in that case, his legal knowledge and crime fighting abilities), all the while attempting to save/redeem the lost or innocent (such as Elektra).

He is not a missionary – he was born in Hell’s Kitchen and has lived in New York City for almost his entire life. He is a man of the people and is very close to the street, with most of the skills of a veteran beat cop. He has a profound love of justice and the justice system, and works hard at making it work better rather than just scrapping it.

However, as the vigilante Daredevil, he often has to work outside the law which has created some conflicts for Matt – being both a street vigilante and a part of the justice system is rarely easy. 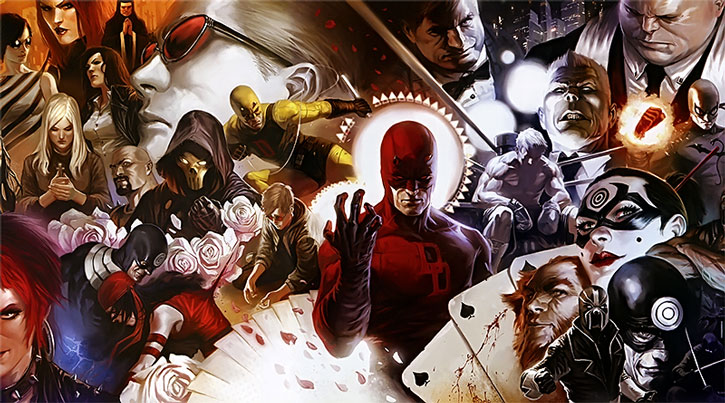 While those themes are rather heavy, Matt/Daredevil generally behaves with a witty, amusing and lively way and almost seems to be more in his late 20s or very early 30s. His occasional partnerships with Spider-Man are full of one-liners and flippant dialogue.

Murdock, a man blind from birth, was a part of the short list with Hal, Guy and John when time came to choose a Green Lantern. He never wanted to wear the ring as he wanted to stay close to the people in New York City instead of patrolling space.

However, when Hal died and the GL corps was destroyed, the last Guardian offered him the ring (yep, *not* to Kyle Rayner) and he felt this time he had to accept.

The current Green Lantern is thus Matt Murdock, and works along with the JLA, his ring providing him with a Lensman-like Perception to compensate for his blindness. His values and morals, however, have led to serious friction with the Guardians of the Universe. His force constructs tend to be very abstract and oddly beautiful – they are shapes imagined by a blind man.

Bonuses and Limitations:
Detect (Lies) only works on beings whose metabolism change as they lie (heartbeat, breathing, etc.).

During that story arc, Matt :

Foggy Nelson has Detective (Law): 09, like Matt, as well as Charisma (Persuasion): 06 (with a special FC -2 modifier : only when he has worked on the case and has a file ready, and only in calm circumstances). Both Nelson and Murdock are recognized as ace lawyers, but are said to be unstoppable when they team up – they will often Team Attack using their law and oratory skills when defending a client.

Total eclipse of the heartbeat

Captain America and Crossbones, who have a metabolism at the peak of human power, both receive a +1 CS bonus to their AV and OV against Daredevil as “reading” their body overwhelms DD.

This is an obscure vulnerability and not a very coherent one, as Daredevil doesn’t normally experience similar problems when pitted against individuals with superhumanly powerful bodies.

Perhaps Cap and Crossbones are right at a sweet spot where reading their body is confusing, but is still necessary to locate them with sufficient precision whereas a superhuman is “noisy” enough to be sensed without focusing on their metabolism. 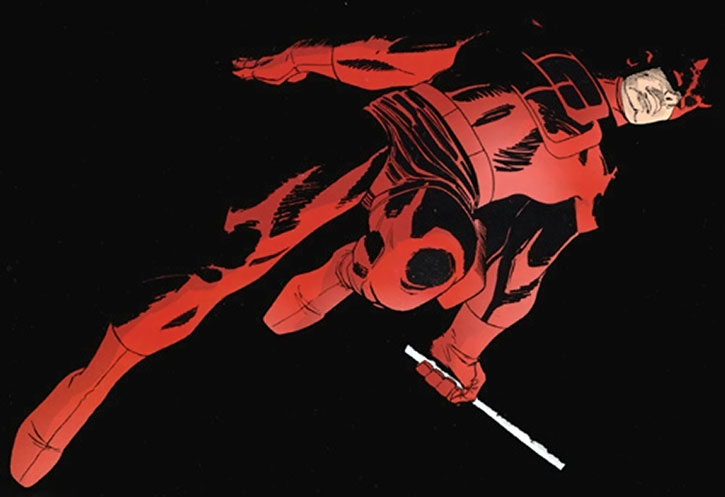 The Second Technology skill is based on the average of his Thief and Gadgetry using the Gadgetry skill table, with a bit of fiddling to get it to the right points per rank. Enhanced Perception bonus based on the highest of his relevant senses power (Analytical smell/tracking scent) and cross-referencing that with the general skills table; used the Insight table for his total ranks for Detect Lies.

During that story arc, Matt wore full body armour made from material similar to a spider’s web and used a weapon, that could quickly be reconfigured as a bo staff, a nightstick or a nunchaku. This raised his averaged PL to 12.2

Total eclipse of the heartbeat

This is an obscure vulnerability and not a very coherent one, as Daredevil doesn’t normally experience similar problems when pitted against individuals with superhumanly powerful bodies.

Perhaps Cap and Crossbones are right at a sweet spot where reading their body is confusing, but is still necessary to locate them with sufficient precision whereas a superhuman is “noisy” enough to be sensed without focusing on their metabolism. 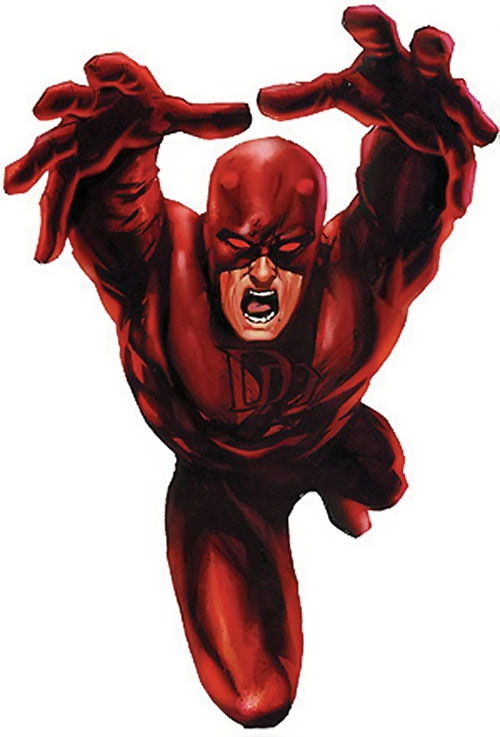 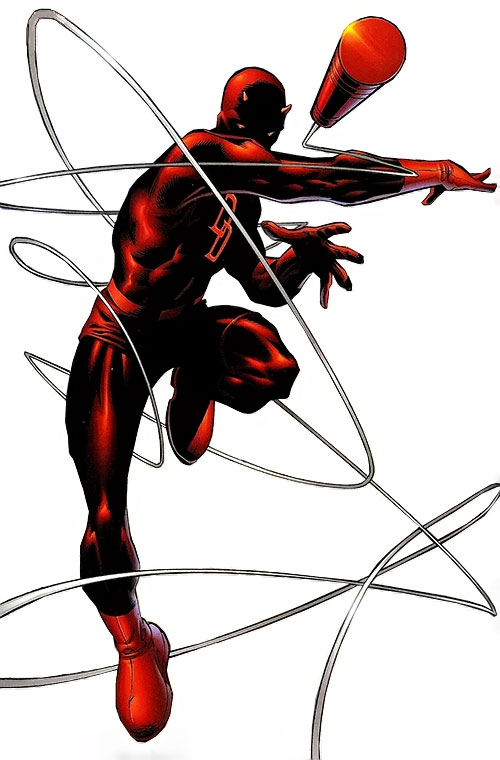 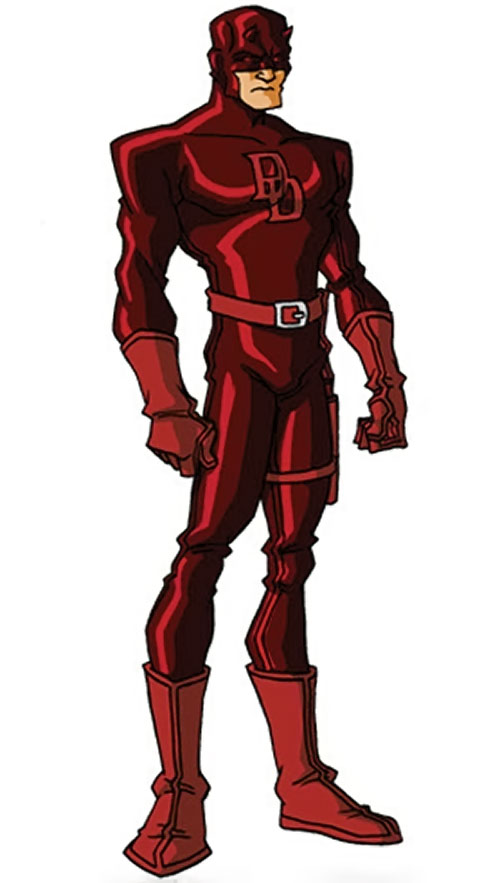 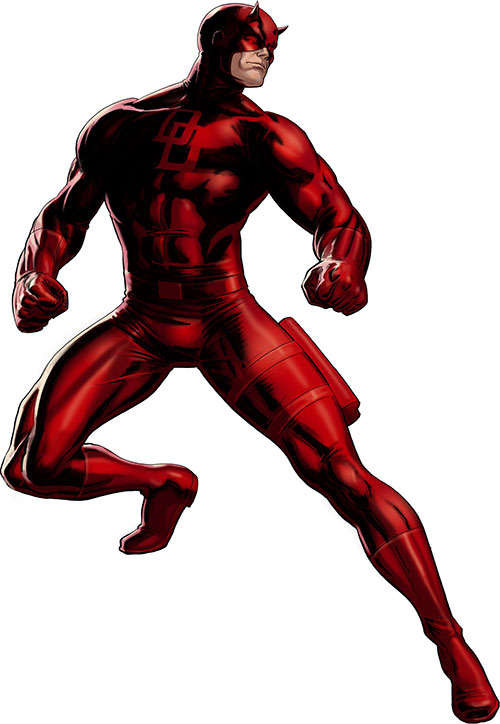 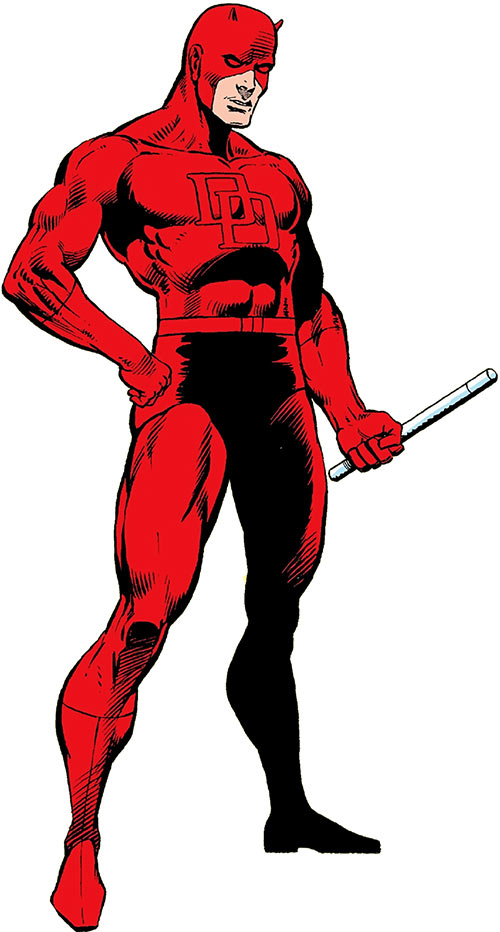 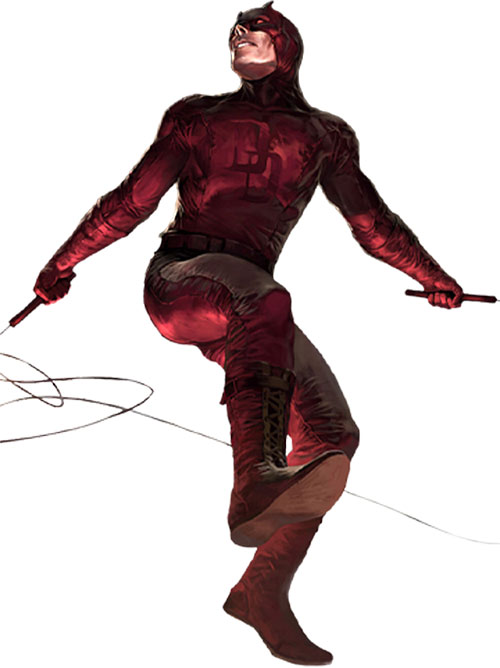 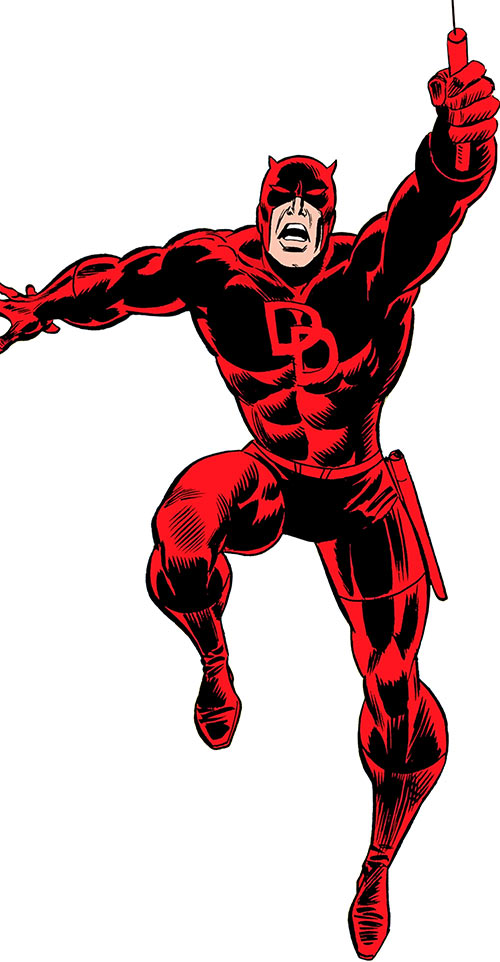 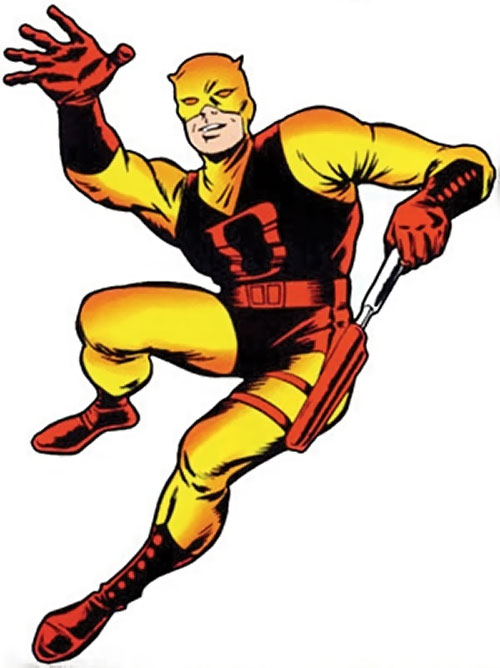 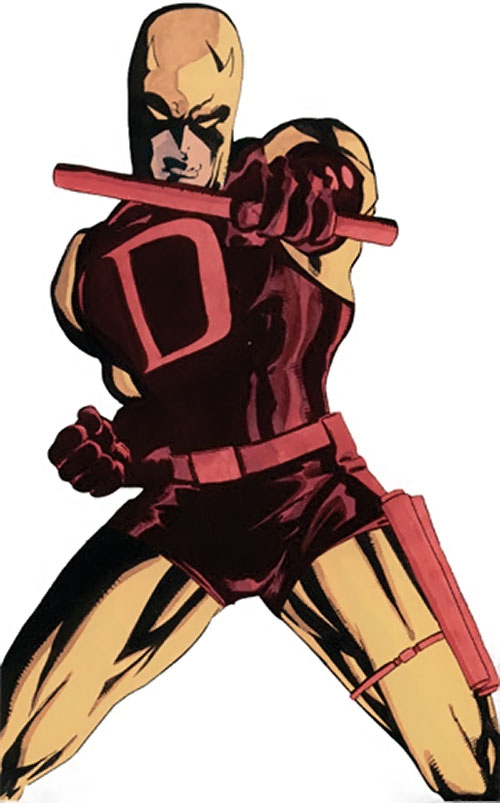 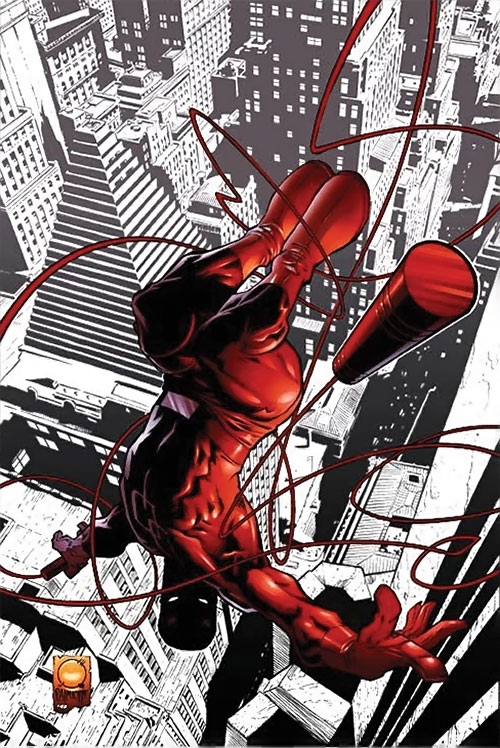 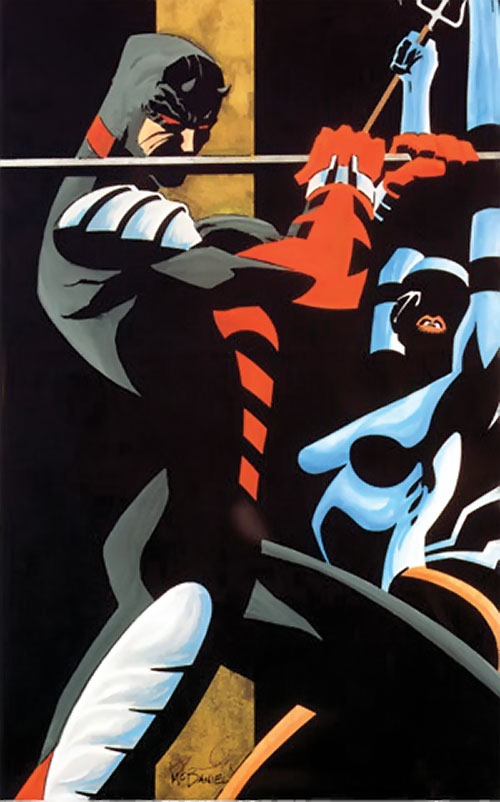 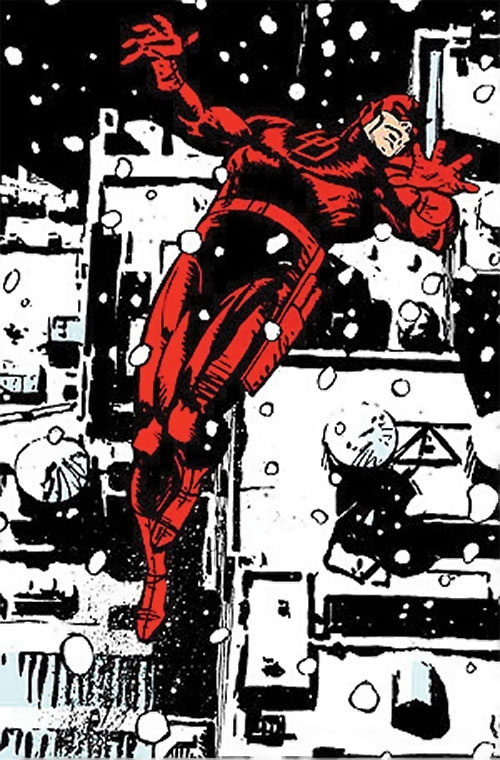 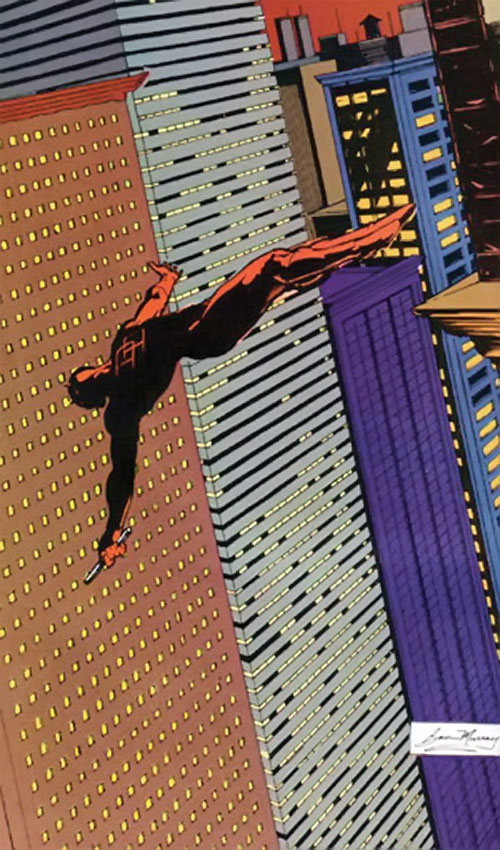 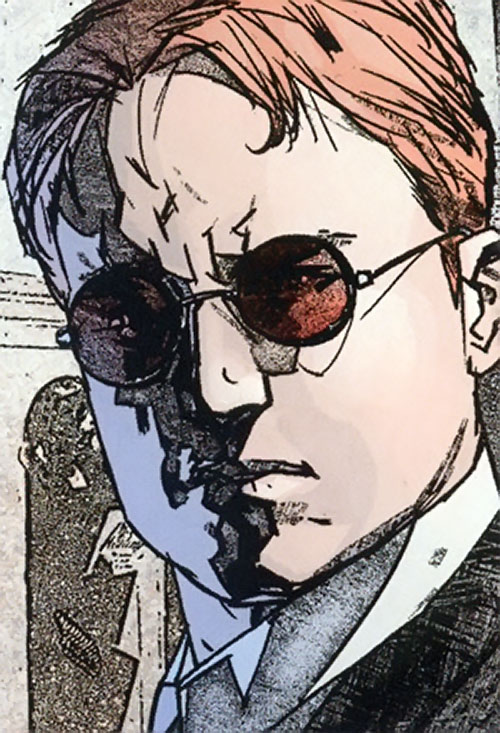 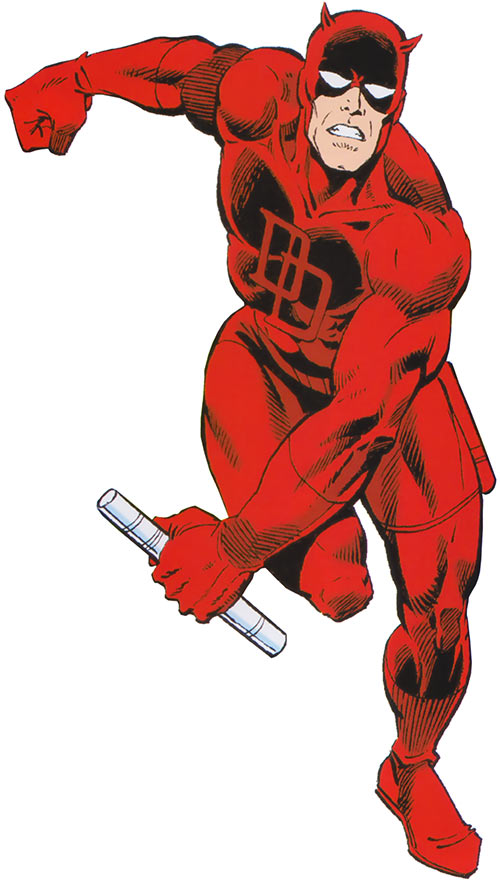 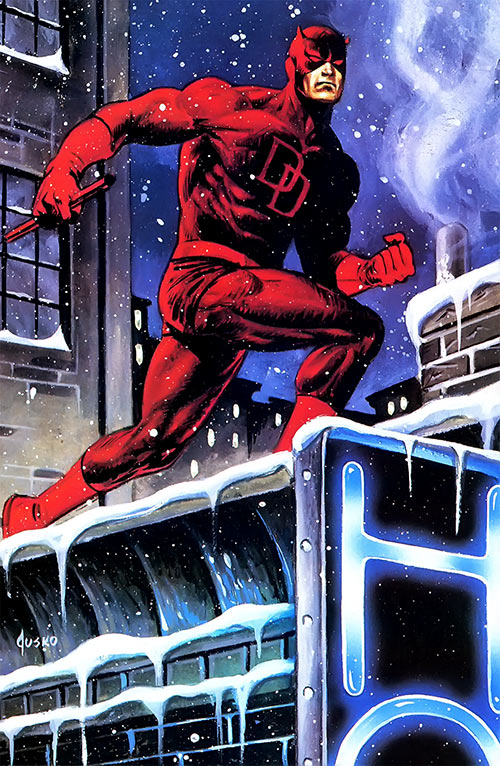