Darius Dax is an evil scientific genius of unrivaled intellect and skill. During his decades-long criminal career he has devised numerous amazing weapons and gadgets, including:

Among his most extraordinary designs are nanites capable of rewriting the synaptic system of the brain. There’s also the Shadow Supreme, a life-like negative carbon copy of Supreme (both built already in the 1960s). Dax used the nanites to gain serial immortality moving his consciousness from body to body as desired.

Dax is also the world’s leading authority on the mysterious mineral known as Supremium (see the Supremium Man character profile). He sometimes uses its properties in his plans to destroy Supreme.

Most often, Dax uses his most recent inventions/weapons while accompanied (in person or at a distance) by an artificial intelligence or two.

Foremost amongst the many adversaries of Supreme is arch-foe Darius Christian Dax. A child genius from Littlehaven, born in the year 1917, Dax was set to surpass Einstein. Eclipsed by the emergence of Kid Supreme, Dax’s jealousy became a bitter hatred that has endured down the decades.

He built the Tremendroid robot at the age of 15, by using Supremium, to kill Kid Supreme. This failed, however, and Dax was sent to reform school. Throughout the years, Dax continued to fight his nemesis Supreme. To do so, he invented a great number of lethal and fantastic creations.

His exposure to the element Supremium, which he intensively studied for a number of years, gave him lymphatic cancer. In 1967 he was told that he had one year left to live.

Like many people in his situation, Darius wanted to use his time mending old grievances and perhaps writing a memoir. So that is what he did, except Darius left a very special memoir just before dying.

He built a device that would digitize and record his memories and personality — his entire mind. The clever thing was that the computers Darius had recorded himself onto were tinier than grains of dust. There were thousands of them. He put the smart dust on the pages of a book, and then mailed the book to an old friend of Supreme’s, Judy Jordan.

Jordan was living alone in Littlehaven, waiting for Supreme to return from space. Jordan had time to read the inscription in the book and then the dust billowed up and, startled, she breathed it in. The micro-machines disconnected the brain-linkages of Judy’s personality, then reconnected them in a new pattern.

It took two days to erase Judy’s consciousness, and a further five to install Dax’s. She was on the kitchen floor a full week. This was an invention of Dax’s in the 1960s and would nowadays have taken effect instantaneously. When Dax finally had muscle control he got up, ate and showered.

Having recovered, he spent the following years waiting and planning. He built the android named HILDA (High Impact Lethal Defense Automaton). HILDA then located and breached Supreme’s citadel. She had sent Supreme a crayon drawing in which there were microtransmitters in the wax.

HILDA and Dax then arranged for Supreme to be sent to the Hell of Mirrors, where many of his greatest enemies had been imprisoned for years.

Dax went on to threaten humanity to hand over power of North America to him or he would destroy it. When the Allies attacked the citadel, which was now Dax’s H.Q., Dax chose to transfer his consciousness to the Allies’s old android enemy Magno. Magno is capable of absorbing the powers of the whole Allied Supermen of America.

Yet, he still risked being overpowered when Supreme, Suprema, Radara and all the Allies showed up.

A ripple in time

Desperate, Dax chose to fuse with ultraviolet Supremium from Supreme’s citadel. Doing so, his increased mass buckled reality and he fell, in Magno’s transforming body, through time back to the year 1958. That was the point when the only other isotope of Supremium existed. There, he became the first Supremium Man, mistakenly granting Suprema her powers.

Dax thus became one of Supreme’s classic villains from the past through the power of Supremium. He relived all documented history of that mysterious menace. After having stolen more Supremium in the 1950s, the Supremium Man was propelled back in time to 1925. Dax became the meteor that gave Supreme and Radar their powers.

Darius Dax thus went full circle, and after a life-long (and beyond) fight against Supreme. He, ironically, ended up in creating his greatest nemesis.

As his existence thus ended, Dax found himself materializing in a limbo  dimension. That was where all continuity-revised Daxes go when the idea of their character is replaced by something newer.

Aided by Original Dax, Darius Dax the First, 1940s Nazi mad scientist Dax, Grim 1980s tittering transvestite serial killer Dax, Darius Dax and Doomsdax, he was successfully sent back to his old continuum. He thus appeared in one of his old hide-outs to plot anew.

Darius Dax since remains at large. His exploits have left him the most feared enemy of Supreme’s in the entire Rogue’s Gallery.

Darius Dax is a suit-clad man, wearing dark colors, with red hair and of average built.

He appears confident and is often seen with an evil smirk on his face.

Darius Dax ruthlessness is legendary. Evil deeds are his life. He is inspired by other known notorious evil historical character, and uses their names respectfully in various sentences; such as, “Merciful Mussolini!”, “Great Roaring Rasputin!” and “Great Genghis!” and other double vowel forms.

Other evil-related wording is also common: “…in the name of nefariousness”.

Like a true mastermind, Dax loves to gloat to his enemies. He even calls himself things like “the Einstein of Evil”. In a most evil revenge plot, Dax took over the body of Supreme’s girlfriend, as Supreme left the Earth in the 1960s, and lived her life for the following three decades.

Dax is quite overconfident when it comes to matters pertaining intelligence, knowledge, calculations etc.. In fact, he believes that he has no equal, and that his mind is the greatest evil of them all. All evil that came before are inferior to his.

There is one exception to this; the limbo world of lost continuities where all revised Dax’s go. He considered the world of Daxia, where everybody is a version of himself, to be paradise and many of them were considered his near-equals.

Dax has secret laboratories all over the country. There he builds amazing weapons to further his goals, and plans everything in great detail. He has backup plans to everything as well.

He usually builds some sort of servant to aid him, such as the robot HILDA or the artificial intelligence named Torquemada (that, of course, calls him “Sir”).

Of course, he enjoys a good cigar.

Dax is very fascinated by the element of Supremium, considering it to be almost divine. He is perhaps the world’s greatest authority on this mysterious space-time altering substance. Dax speculates that perhaps the apparent continuity revisions are produced by the element itself.

“Good morning, Omegapolis… and a big hello to those of you listening in from the news media, and of course the Pentagon. My name is Darius Dax, and this big blip that appeared on your radar moments ago is Supreme’s flying citadel. It’s huge, impregnable and armed. Here’s the basic picture : by Noon, North America will either be mine, or it will be smaller. Then, one pulverized city per hour until surrender. I think that sounds fair. Thank you all for listening. Until Noon, then.”

“Heh heh ! At last my enigmatron is complete ! I’m not sure what it does, but no doubt it will help me destroy Kid Supreme !” (young Dax in his lab)

Darius Dax is a apparent homage to Silver Age Superman’s archenemy Lex Luthor. Thus, use either the Silver Age  DC Universe in its entirety or Moore’s Supreme Universe, possibly as a pparallel world, with its small differences and twists of these classic characters.

Bonuses and Limitations:
Personality Transference has a Range of Touch only (-1) and will only work through mouth to mouth contact (-0).

Darius did not have the Personality Transference power until he first took over Judy Jordan’s body at the end of the 1960s.

Originally, the process was slow and required 15 APs of time to complete (-2). He has since upgraded this technology and can transfer his personality and essence instantly to another body by transferring his nanites to the new host by mouth to mouth contact. 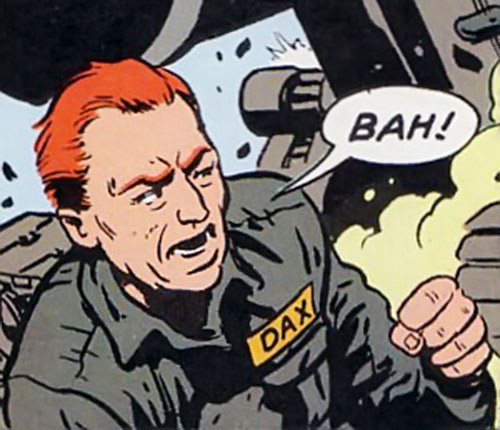 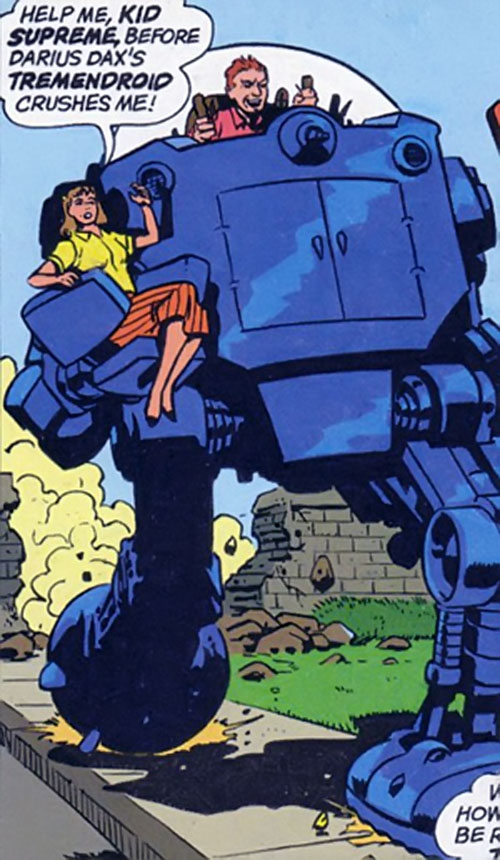 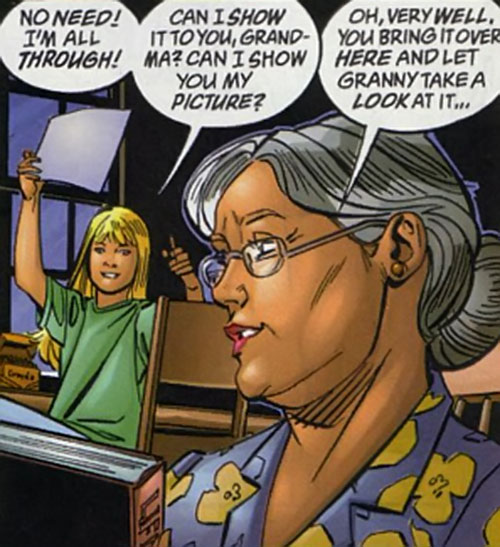 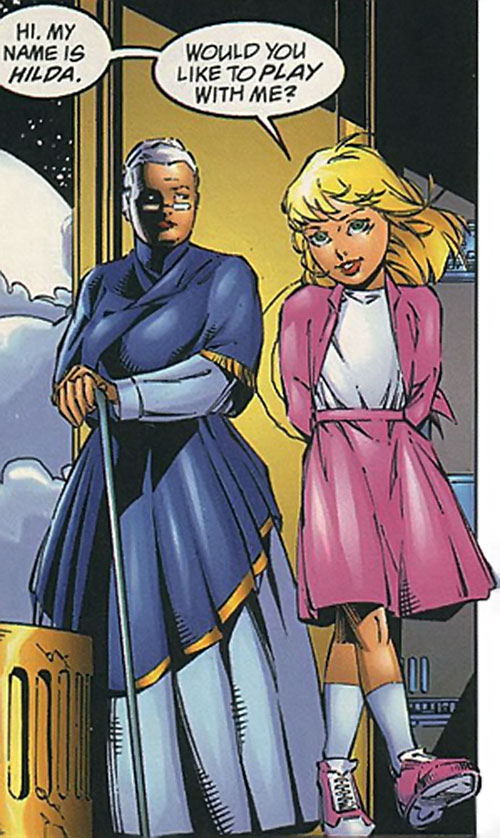