“The dark shadow of the unknown not only extends beyond the vast reaches of outer space. It also winds mysteriously through the centuries… a path of peril, not meant for the trespasser. Yet this fantastic trail becomes the scene of grim pursuit when the Challengers of the Unknown battle an incredible foe… the Wizard of Time !”

Darius Tiko chiefly appeared during an early — 1958 — Challengers of the Unknown adventure by Jack Kirby.

If you’re not familiar with the early Challs, by all means do read their team profile first.

He’s an obscure, generic character with but two appearances. He thus may not be worth a profile, but :

However, he can use many sorts of guns and vehicles. He’s also faster than he looks.

He has superior technological skills, and robust knowledge of chronophysicsThe science of time (usually used for time travel). These gave him a slight edge over the Challengers of the Unknown.

He’s also a smart planner and a good negotiator.

We can *assume* that he had stealth and B&E skills, in order to steal stuff whilst in 3,000 A.D.. But these need not be pro-level, since this era was crime-free.

The main Time Cube used by Tiko is the size of a large bedroom. Beyond travelling through time and space, it can :

We’ll assume that it travels to alternate timelines, rather than its origin timeline’s actual past. This is the default interpretation in superhero comics. And it works fine with the story as presented.

This time travel tech needs some sort of information about events to navigate. This is hazy, but it means you normally can only travel to historically documented past areas. Making up hypotheses as to how it works is interesting.

(Since the time machine inexplicably grants linguistic abilities, perhaps what is being used as a “map” is a level of reality defined by language ? And perhaps the prophecies of the ancients were based on accessing this level and doing semantic analysis.) 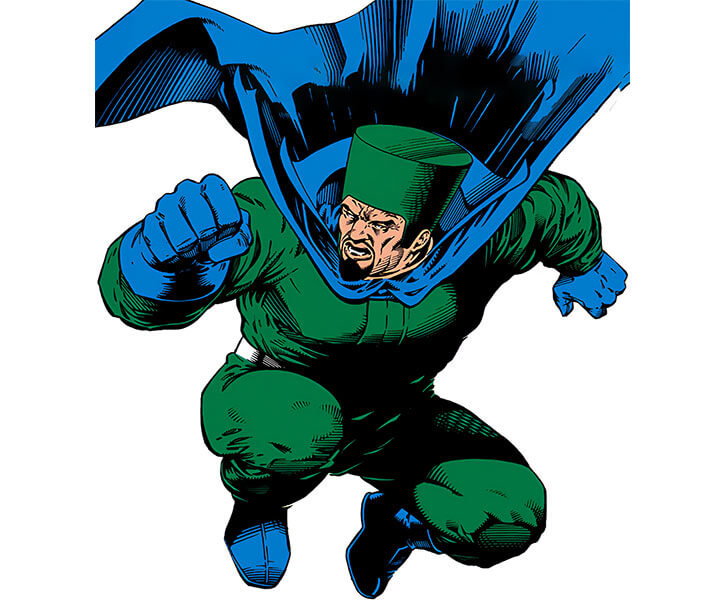 Reinmetz died during the 1950s, but Tiko managed to complete his research into… time travel !

(Ace Morgan assumed that Tiko had stolen Reinmetz’ formulas, though he didn’t quite accuse Tiko of having murdered the doctor. Why Ace leapt to these conclusions isn’t clear.)

Tiko irresponsibly toured through time. He hunted dinosaurs with an elephant gun (and prolly stepped on a butterfly at some point), filmed Ancient Maya rituals, observed Viking raids in Britain, etc..

He also met with sages in Ancient Greece and Ancient Egypt. These knew prophecies about the far future, which Tiko could use to visit his future as well as his past. He struck deals to exchange XXth Century tech against these secrets.

Tiko brought a few henchmen from the past. They helped him steal a large telescope, and an old biplane. However, seeing Ancient Egyptians and Ancient Greeks running around alarmed people.

(Tiko mentioned that he “taught” modern English to his helpers. This doesn’t make much sense, especially since the time travel machine clearly imbues travellers with linguistic knowledge… So let’s forget that “teaching” bit.)

Furthermore, one Greek was captured. Once the authorities realised this man was far too knowledgeable about the language and history, they called in an archeologist. Who in turn called in the Challengers of the Unknown.

With the captive’s help, the Challs located the “Island of the Wizard”. When confronted, Tiko boasted about his voyages. But as he realised that the Challs would arrest him, he fled in his Time Cube. 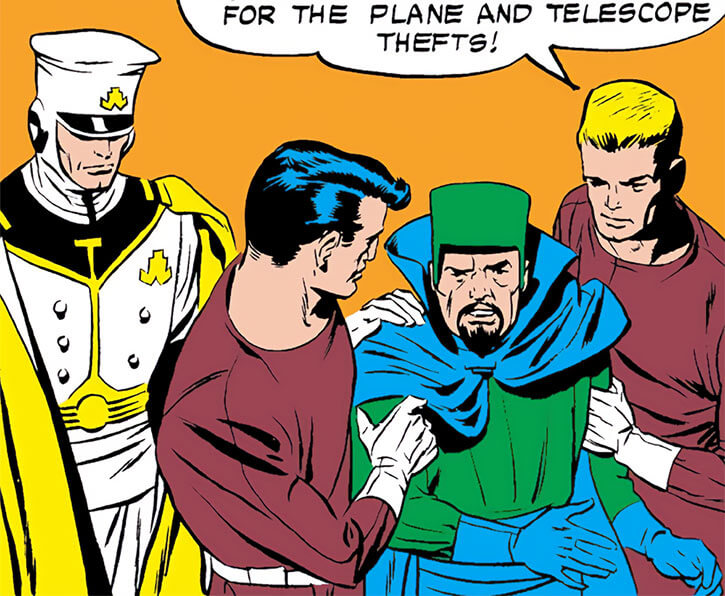 The Challengers learned to use the smaller, backup Time Cube. Using Tiko’s notes, they travelled to the right bit of Ancient Greece and destroyed the biplane.

Tiko was nowhere to be found. But since he had been dealing with parties predicting the future, the Challs deduced his rough plan. They paid a visit to Nostradamus.

Their guess paid off – Tiko had made a deal with him too. And between all three sources, he had enough data to program a trip into 3,000 CE.

The Challs modified their backup Time Cube and gave chase. But by the time they caught up, Tiko had already stolen a lot of super-tech. Weapons, metal transmuters, powdered light, super-medicine, etc..

The time thief got the drop on the Challs. He caught them in an anti-gravity beam.

Tiko was about to return to the XXth Century when he was arrested by the United Earth Police. They had detected the arrival of both Time Cubes.

Both Tiko and the Challs were judged by a computer for being in a “restricted zone”. But the computer judge ruled that they were too primitive to know better.

The stolen tech was repossessed, the backup Time Cube destroyed, and the primitives sent back to the XXth Century. They were warned that the Cube was rigged to explode and destroy Reinmetz’s lab and island shortly after arrival.

Tiko escaped. However, before he could don the most powerful weapon he had stolen, he was mugged. The thugs thought the weapons were jewellery, and inadvertently activated their powers.

But just as the Challs were winning, Tiko entered the fray with the fifth ring – the void one.

He created a sort of micro-black-hole. This kept Superman busy preventing nearby people from being sucked in. But Ace Morgan went around the “Wizard of Time”, and forced him to surrender at gunpoint.

The Challs and Tiko then returned to 1958.

However, the only crimes he had committed there had been stealing an antiquated biplane and a telescope. So despite Rocky’s assertion, Tiko likely didn’t spend that much time in prison.

The Immortus-style costume is typical clothing from the year 3,000, worn to blend in.

Time Cubes resemble TARDIS units. We could thus suggest a scenario where Prof. Reinmetz was a time-lost Gallifreyan assembling his way back home.

If Tiko indeed murdered him, then this person may have regenerated since.

If one is amused by Tiko’s Immortus-like costume, it could also be suggested that Reinmetz was the DCU’s equivalent of Nathaniel Richards. But never became a Kang/Immortus/Centurion/whatever since Tiko killed him.

The Gadgetry (Build) score assumes that he simply finished his employer’s work, and isn’t a great engineer by himself.

As to Scientist it’s not *quite* demonstrated, but I’d err toward it.

Tiko mentioned that his last name was Greek. That, plus the fact that he could navigate Ancient Greece and (possibly Hellenistic) Egypt also *weakly* suggests knowledge of Greek history.

Writeup completed on the 2nd of November, 2019.