This is one of those tales where somebody will inevitably go “man, 1970s writers sure dropped acid lol”. But though the material hasn’t been reused much, it has interesting potential.

Mordecai Jones was a brilliant gymnast. His remarkable agility wasn’t diminished in any way when he became the Dark Messiah – if anything, it was enhanced. The Dark Messiah seemed faster and more accurate than even Daredevil (Matt Murdock), a near-peak-human fighter and acrobat.

He was also given superhuman strength and durability. The Messiah seemed bulletproof, and Daredevil’s blows didn’t achieve anything.

Daredevil noted that his heart was impossibly slow, and his bone structure had been altered. One of Jones’ remarks implies that he could hear the superficial thoughts of a person.

The Messiah strides softly and silently. However, he’s unlikely to opt for stealth, preferring to glow and make thunderous declarations.

One gets the faint impression that Titanian technology turned Jones into an approximation of an Eternal. Beyond his physical power and precision he could emit a variety of eyebeams and erect huge bubbles of impenetrable force.

He could also teleport away, along with his disciples if need be. Howbeit, it is entirely possible that this was done by Moondragon, rather than a capacity possessed by the Messiah himself.

No man may stop the disciples of doom !

Early on the Dark Messiah was accompanied by three super-powered disciples. Each had but a single power.

One could project vibration blasts, another could manipulate earth and lava, and the third could project illusions of an alien environment. These illusions were devastating, leaving people drained and completely disoriented.

Furthermore, all three disciples were fit and muscular. They also likely had criminal and fighting experience.

The power of all three disciples was derived from the Messiah’s. But whether he empowered them directly — and thus could create new disciples — is unrevealed. It seems more likely that the disciples were a direct product of Moondragon’s tech.

For all his power, the Dark Messiah’s main drawback was that he was insane. His strategies were fickle and made little sense.

Back in 1973, Mordecai Jones was a talented street performer. He demonstrated gymnastics and acrobatics on San Francisco sidewalks. But one day a skittish dog, frightened by his moves, attacked him in mid-sommersault. Surprised, Jones fell and cracked his head on the pavement. 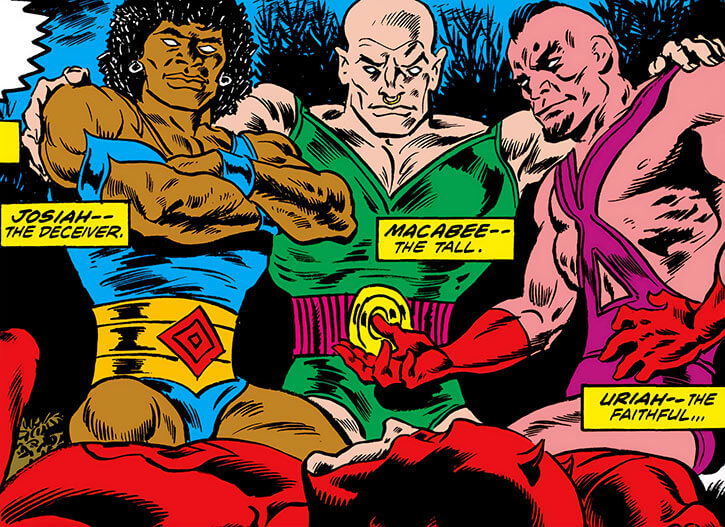 The patrolling Daredevil helped get him in an ambulance. Nevertheless the young man was half-lost in the shuffle at the hospital. A shadowy figure then absconded with the unconscious Jones and his gurney. Using equipment within a secret room in the hospital, the kidnapper turned Jones into a superhuman.

The abducter was likely one Kerwin J. Broderick, or one of his agents. Broderick was an ally of Moondragon (Heather Douglas), who back then operated as “Madame McEvil” . The technology used to empower Jones was thus of Titanian origin.

Mistakenly thinking that Earth had been conquered by Thanos, Moondragon, had been creating superhuman agents to fight the Mad Titan. But Broderick was manipulating her in a bid to merge with the Titanian doomsday weapon called Terrex.

Witness the Saviour of Man

As the Dark Messiah, Jones rampaged several times in San Francisco. During his first outing he beat Daredevil with but a gaze, and disintegrated a prison’s wall to recruit “disciples”. Having freed more than 200 criminals, he took them to the Golden Gate Park. There, he erected a force bubble with only one opening at its apex.

The SFPD helped Daredevil get inside to confront the Messiah. However, Jones soon chose to teleport away along with his disciples. What happened to most of the escaped prisoners is unclear. 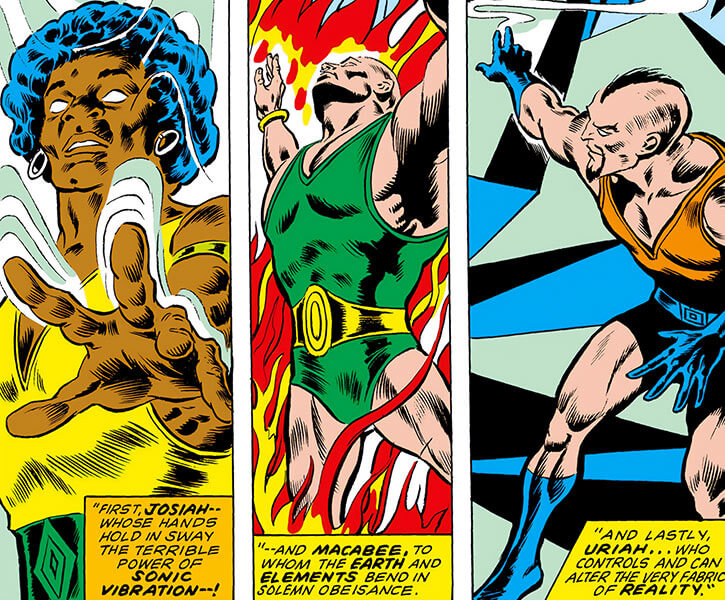 On the next day, the Dark Messiah sent his three superhuman disciples to terrorise San Francisco. But they were soon stopped by Daredevil and a wounded Black Widow (Natalia Romanova). However, the Dark Messiah then teleported in, depowered his disciples. The mutated Mordecai beat up Daredevil, killing a shopkeeper in the process.

Daredevil then realised that the Dark Messiah was the acrobatic youth he had seen a few days before. When confronted with this, Jones was unable to handle the truth. He apparently exploded.

However, minutes later, she learned from Daredevil that she had been deceived. Kerwin Broderick turned against her, took control of her agents and proceeded to merge with Terrex.

The Dark Messiah erected a force bubble around much of San Francisco, then rampaged to announce the rule of Broderick. However, Moondragon reached him along with Daredevil and the Black Widow. She depowered using the obvious solution – she reshuffled his intraform molecular migration. We’d all have done the same, I think.

The Dark Messiah hasn’t been seen since. Thus, in which mental and physical state Mordecai Jones was left is unrevealed.

The Dark Messiah genuinely believes that he’s the new Christ. With the important difference that his agenda involves very little love but lots of violence, smiting and destruction.

He constantly makes references to his supposed near-divine, prophetic pseudo-Christian status. He also speaks English from the King James Bible. This was later shifted to Asguardian -style pseudo-Shakespearian English, perhaps by mistake.

Mordecai Jones’ overall behaviour didn’t make any sense. He didn’t have a clear goal – much less a strategy. One gets the impression that he knew that he wasn’t a real messiah nor divine. If so he was just ranting, causing chaos, and posturing in an incoherent effort to deny this truth.

Back when he made efforts to sound like an old Bible, Mordecai excelled at coming up with impressive and thunderous statements in a, well, Biblical style. Based on this it is possible that he grew up with unusually heavy exposure to this text. As the son of a preacher man  or some such.

“Stand ye back, O crowd, or I shalt stride on thee — as easily as I might ’pon water. For holiness resides within this forceful frame ! And where I walk, choirs of angels shall sing hymns of it everafter. Yea, back, ye multitudes or face the wrath of — Mordecai Jones — The Dark Messiah ! To my kingdom I come — and my will shall be done.”

“The power to kill with a gaze is a truly awesome thing, my friend. It is fortunate that only I wield it. Just as I wield the beam which now is holding you, crushing you against that wall. This is the coming, Daredevil. *My* coming ! I am risen from the dead ! The time is at hand !”

“Blasphemer !! Clad in the garb of Satan you trespass on sacred ground !! Thus must I drive you from this templed soil — forever ! And him who is free shall strike the first blow ! SO BE IT !” (kicks Daredevil in the chest)

“You pitiful fool ! Did you truly expect a mere physical blow to affect one whose power is… THE Power ?”

“Come ye hither, disciples ! I should like ye to meet our antagonist. His name is called… Daredevil. And to thee, my beloved infidel, may I present… the Disciples of Doom ! First, Josiah — whose hands hold in sway the terrible power of sonic vibration —! —And Macabee, to whom the Earth and Elements bend in solemn obeisance. And lastly, Uriah… who controls and can alter the very fabric of reality.”

“Thou art surprised I anticipated thy question ? Be not so startled, ye of Satan’s cloth. For… wouldst thou have thy deity be less than omniscient ? Answer thy living redeemer, Daredevil ! ANSWER !”

“Hast thou so soon forgotten the Dark Messiah, Daredevil ? Alloweth me then to refresh thy failed memory — by hoisting thee and thine unchaste companion aloft ’pon the light that shineth from mine eyes !”

Josiah the Disciple: “See how the mortals scurry like rats before us ? Though they lack the words to describe, they *know* who and what we are !! Thus in the name of the messiah Mordecai do I raise my hand and cry : CHAOS !” (BOOM !)

And seeing the multitudes, he went up into a mountain

The three disciples share the same stats, though they have different Powers.

There is not enough data to determine how the disciples should be handled in game terms – they might be Connections, or Sidekicks, or the result of a Bestow Power used by the Dark Messiah, among other possibilities.

Teleportation ● 16 points ● Descriptor: Unrevealed
Teleport 8. Any specifics are unrevealed, and there’s a significant chance that it’s actually performed by outside machinery.

Source of Character: Daredevil circa 1972. 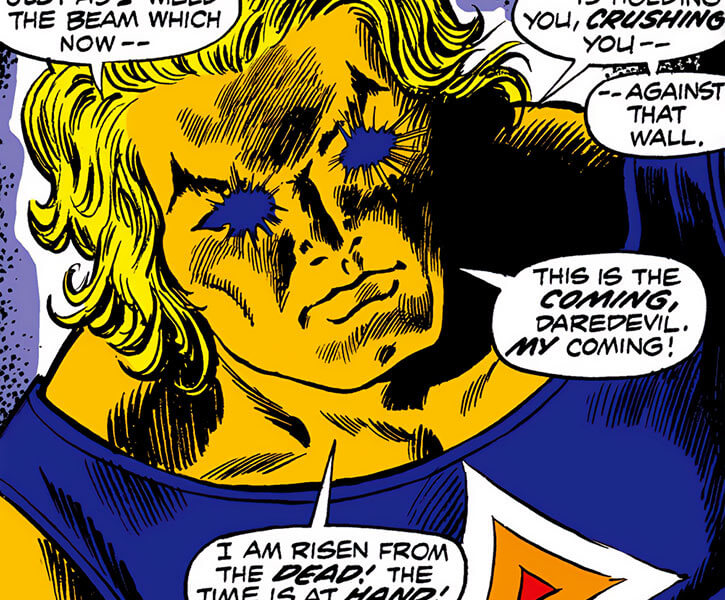 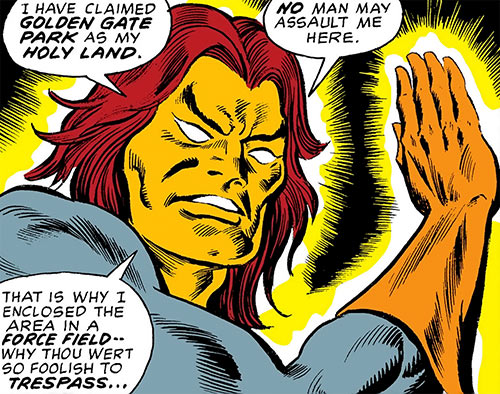 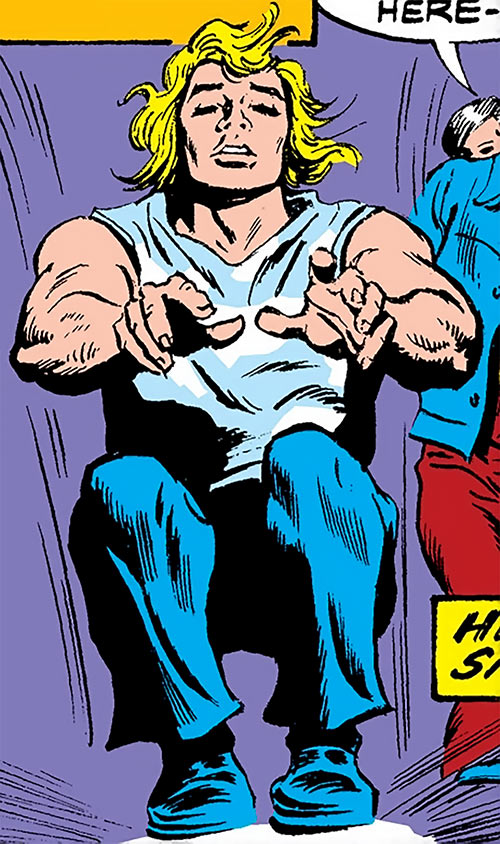