Dark Opal is a great master of the mystic arts. On a world where everyone is a magician he has but one close rival, the Princess Amethyst.

Dark Opal is also an expert with all weapons common to Gemworld. That includes swords, staves and bows. He further possesses immense physical strength, many times greater than that of a normal man, and is a brutal and deadly melee combatant.

If you add to that numerous underlings, a sharp mind, ties with Chaos, and great resources, you have an excellent master villain for most superhero groups.

Born the heir to the House of Opal, Dark Opal conceived a passion for power early in his youth. After ascending to the throne of the House of Opal, he sealed pacts with various otherworldly forces. Opal developed secret alliances, raised his mastery of his mystic powers to awesome levels, and awaited his moment.

When that moment came he struck suddenly and with all his power against the ruling House of Amethyst and its allies. He overcame all resistance. Soon Dark Opal was master of Gemworld.

For 20 years did he rule, seeking to consolidate his power in preparation for the conquest of other mystic realms. On several occasions he attempted to forge a breastplate containing slivers from each of the House Gems of the 12 royal Houses of Gemworld. This armor would increase his power to incredible levels, but each attempt was thwarted by the Princess Amethyst.

At last Dark Opal was overthrown by an alliance of the other 11 Houses, led by Princess Amethyst.

Caught in a mystic backlash as his powers imploded, the only trace of Dark Opal that remained was the clasp that held his cloak. This mystical trinket contained a sculpted face whose expressions mirrored Dark Opal’s, and its final frozen expression was one of madness and rage.

Nothing illustrates the term “rat bastard” better than Dark Opal. Opal was pure evil, willing to do anything to achieve total power over the Gemworld. He was willing to sacrifice both his son Carnelian and his ally Sardonyx in his quest for dominance.

If the only way to victory was to stab his friends in the back, Dark Opal would bring two knives.

Compiled by Sébastien Andrivet (stats from the Atlas of the DCU, history from Who’s Who). 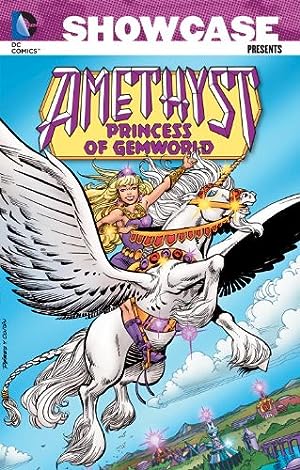