These are older technical notes about Darkhawk as he existed during his earliest years, rather than a full profile. Still, they’re useful if you want to feature him in a game, and will be useful when we revisit the material.

Darkhawk’s abilities seem to have been randomly rolled on a MSH  table ;). Whenever he touches his alien amulet, Chris is teleported to the starship in nullspace, and the Darkhawk android body takes his place. This body has enhanced strength, durability and agility, as well as some vision powers.

He also has a costume with a claw-cable on his right hand and retractable glider wings under his arms, with an ominous looking helmet.

Chris is an excellent student of kendo and unarmed martial arts. Thus, he has proven able to successfully defend himself against four young toughs at once.

Dargin Bokk was an intergalactic crime lord. He sought to improve his agents so they would become expandable, yet able to come back. He thus went on a quest for independent scientists, whose inventions could be combined to create such resurrection-capable super-agents. Among these : 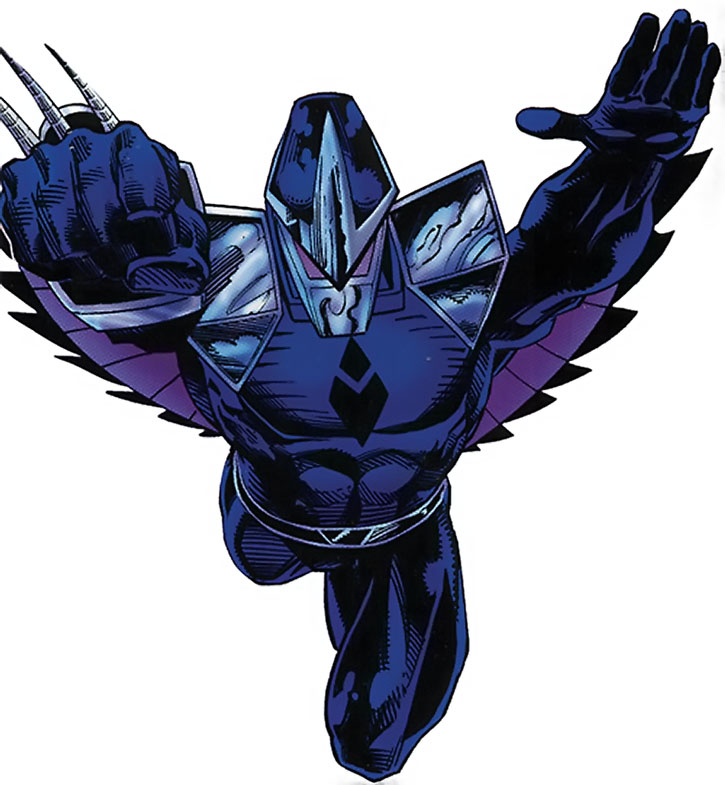 Five androids were designed, each with an amulet allowing to telepathically control it. However, most of the scientists had been coerced by Bokk, and they rebelled using the Darkhawk bodies. Bokk killed one of the Darkhawk and took over it, becoming Evilhawk. One of the ’hawks fused with Bokk’s starship, and another had his body stolen by Portal.

The two remaining ones projected their consciousness on Earth, and became mysterious Darkhawk supporting characters.

One of the amulets ended up in the hands of Chris Powell, a young New Yorker. He became a vigilante after he discovered his father, a cop, was on the take from a local crime lord, and made himself powerful enemies.

As Darkhawk, he’s 6’1” and athletic, and clad in a night-blue costume with metallic soles, collar and belt, and a metallic apparel on his right forearm with a three-pronged claw-like grapnel above his hand. He has black triangular shoulder plates, and a forward jutting helmet that looks a bit like a TIE pilot’s in Star Wars.

The Darkhawk body uses a vocoder with a hollow, inhuman voice. It bleeds a bright green fluid when wounded.

The second Darkhawk android body and armour, not currently covered by this writeup, looked like this: 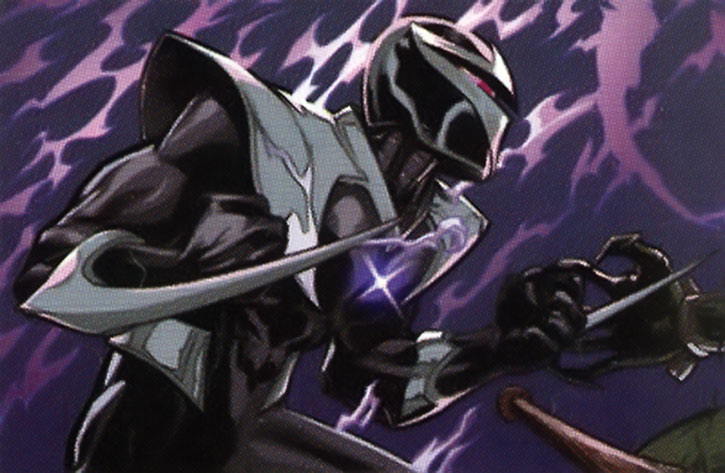 Darkhawk is just a brave kid thrust into a volatile situation. He’s in that teenage phase where you rebel against authority (OTOH, his father is a cop on the take), and thus became a vigilante.

He seems to have been heavily influenced by Batman comics, and sometimes consider himself as justice incarnate.

Drawbacks:
Alter-ego, Minor Rage, Secret ID, Strange Appearance (no effect as long as he keeps the helmet, and can be easily bypassed using alter-ego (7 pts)). 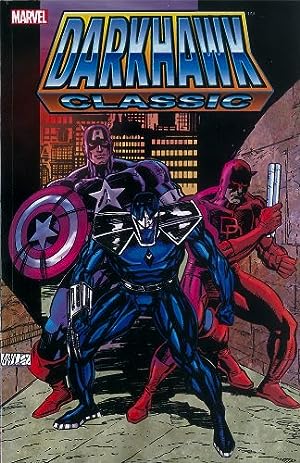 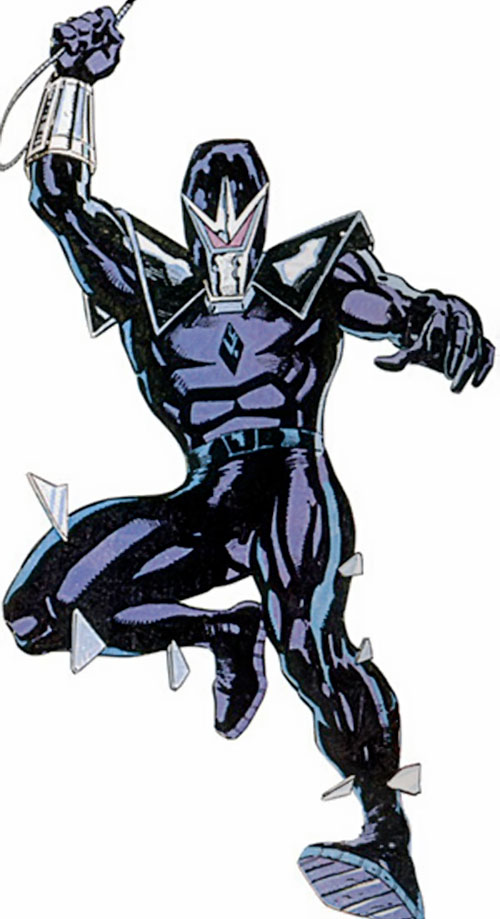 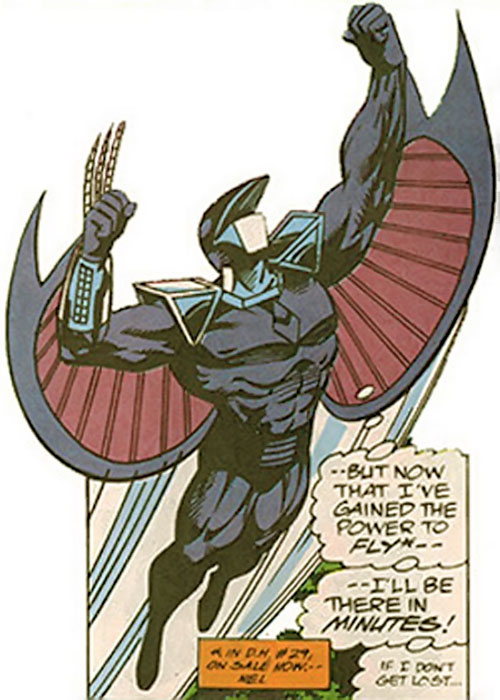 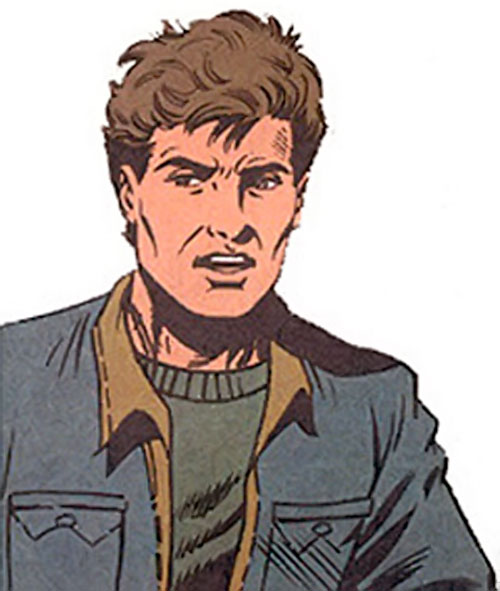 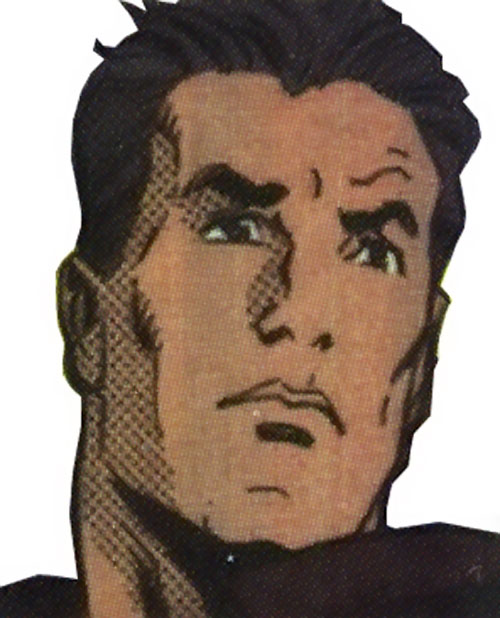