And since it’s a Sam Raimi movie it wraps everything in over-the-top action and rather kinetic storytelling.

This comic-book-like movie was uncharacteristically well-regarded for its craft and energy, and remains a cult movie.

Dr. Peyton Westlake foremost is a scientist, specializing in synthetic skin. He has a keen and analytical mind capable of complex plans. He has a very good understanding of computers, physics, chemistry and nanotechnology. He’s a genius at dermatology, but seems to be unable to make a stable formula for his synthetic skin.

He’s an excellent actor and a good speaker. He uses synthetic skin for preparing perfect masks of his opponents.

Since his near death in the lab, Westlake no longer has any physical sensations. Thus, he cannot feel any pain and his muscles never atrophy or tire. In stressful situations his adrenaline levels reach extreme levels, which gives him superhuman strength. Due to this status, he can take superhuman amounts of damage.

His body also heals at an increased rate. His speed and dexterity are also increased due to the same reasons.

Dr. Peyton Westlake used to be a highly devoted scientist specializing in synthetic skin research. When he refused to help a criminal mastermind by the name of Robert G. Durant, he was hideously beaten. Durant and his men then burned Westlake into unconsciousness in his own lab.

When he came back to his senses he found a bomb placed in the lab by Durant’s men. He was unable to gain the strength and time to stop it. The lab blew up, and Westlake flew burning, through the window, down into a fountain outside.

Through the power of his hatred, he managed to crawl up from it and fell unconscious. He next woke up in the hospital as a John Doe. His body had been so badly damaged that the doctor’s had to disconnect part of his nervous system from his brain so that he wouldn’t die of trauma and shock. His face was hideously disfigured and burnt.

Westlake wanted revenge and escaped from the restraints he was kept in. He attempted to contact his wife, but she ran away in panic, believing Westlake to have died in the explosion. Westlake felt like that everything was completely hopeless.

His desire for revenge, however, gave him renewed strength. He headed for his laboratory, since science had been the most important thing in his life. Westlake realized that his salvation might lie in the synthetic skin that he had been working on. 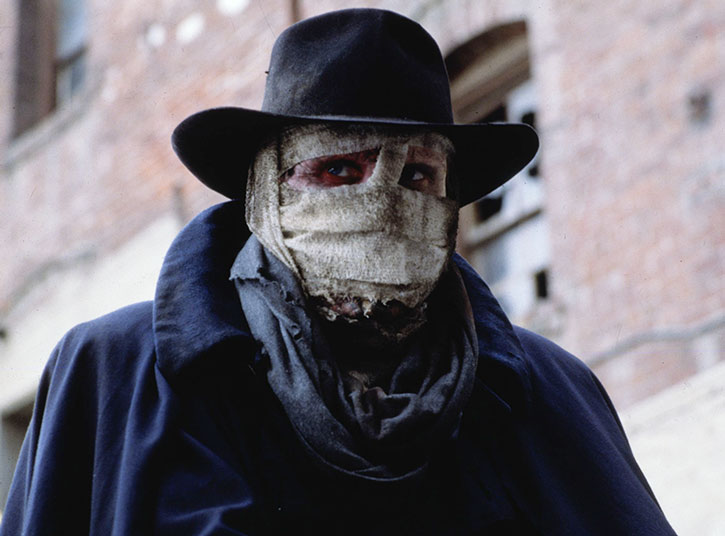 He carried undamaged equipment from the site of explosion to a new area, bought new equipment, and began experimenting. He soon had a working formula that enabled him to create synthetic skin. He used the technology to create masks of his enemies and began to infiltrate their organizations wearing them.

He adopted the identity of the Darkman, feeling that he no longer could return to his former life.

He finally managed to destroy his nemesis Durant and most of his gang. Durant apparently died in a helicopter crash. His former wife eventually found out the truth about what really had happened to Westlake. But Westlake chose to continue his fight for justice for the innocent as Darkman.

However Durant had survived the helicopter crash. After several surgeries, he returned as the crime lord to a renewed gang. The ordeal had left Durant weakened and he needed heart medicine in order to survive.

Durant and his gang were developing new, high-energy weapons for sale for the underworld. Thus he would regain his status as the main arms dealer.

Meanwhile, Darkman found out that an old colleague of his had made a scientific breakthrough. This discovery might be able to reconstruct his body and return him to his former self. Alas, Durant tortured and killed this friend, depriving Darkman of his only hope.

Darkman infiltrated his organization. Finally, after much trouble and with the help of the dead scientist’s wife, Darkman managed to destroy the gang and kill Durant this time around.

Westlake continued his operations as Darkman, from a hidden base in the underground system. He confronted the gang of Peter Rooker, dealer in drugs. After the battle, he escaped with $100,000 of their money. Darkman bought further laboratory equipment and found a formula for liquid skin that could work for him.

Rooker, fascinated by the existence of a being such as Darkman, wanted his power for his own. He hired a criminal friend of his, the brilliant Dr. Bridget Thorne, who was treating Westlake at the hospital. Thorne managed to find Darkman in his lair. She offered to treat him with a new method that would give him his sense of feeling back.

A reluctant Westlake agreed. Upon waking up, after the operation, he was greeted by a gloating Rooker. Dr. Thorne had implanted a nervous disruptor in he spine at the neck. By a remote control they could inflict great pain in Darkman.

Their intent was to keep Darkman under control until they’d succeeding in duplicating his power. Rooker also took the disc that contained Westlake’s recent scientific notes, and the small sample of liquid skin that had been prepared.

Dr. Thorne managed to create a steroid based on Darkman’s physiology. It would give other humans his superior strength. Rooker decided to test the drug by giving it to five henchmen and giving them the order to physically kill one of his political enemies at a press conference.

When Darkman woke up in a cellar, he began to search for tools. Upon finding a pair of pliers he used it to tear away the device from his spine. When a guard came to kill Darkman, since he now had served his purpose, Darkman threw the neural disruptor into his captors eye and activated the device, thus killing him.

He then escaped and located Rooker’s family, which consisted of an abused wife and child. The wife wanted to leave with her daughter, but couldn’t possibly do so alive.

Finding out Rooker’s plans to kill the politician, Darkman intercepted the attack. The superpowered thugs were gunned down by the security guards.

In a final showdown, Darkman killed Rooker, who’d just destroyed the disc with Darkman’s only notes about the liquid skin. Rooker’s daughter was accidentally wounded and disfigured during that attack.

Later at the hospital, Darkman made a visit, as Dr. Westlake. He used the only sample of liquid skin he had to repair the damage on the child. He thus returned alone, with the thanks of the wife, to continue as Darkman.

The older, shorter trailer is less cheesy, though it’s only in 360p. Just watch it small on this here page.

Darkman is a mysterious-looking man wearing a black long coat (complete with a mantlet), black shoes, black gloves and a black broad-hat. His head, when visible from under the shadows, is fully covered with formerly white bandages except for the eyes and mouth that are free.

The skin that can be partly seen through the non-covered parts of his face are hideously scarred. Beneath the bandages his skin and face is extremely damaged, giving him a ghoulish appearance.

Whenever he applies one of his synthetic skin masks he first removes the bandage. Thus, if he loses such a mask, his true face will be revealed, until he can replace/cover it with his Darkman bandages.

Darkman appears to move rather clumsily and apparently slowly. His voice is nasty and raspy, unless he’s impersonating someone.

Darkman is an avenging spirit. His existence is focused around the punishment of criminals and seeking justice for the innocent. When his former nemesis Robert G. Durant was still around, he spent all his energy and resources on destroying him and his organization.

Darkman considers Dr. Peyton Westlake to have died in the explosion that destroyed his body, and Darkman to having been born then. He’s fully aware that he’s Westlake, but refuses to use that identity since he no longer can live his old life.

Still, he presents himself as Dr. Peyton Westlake, on occasion, when interacting with normal people. When doing so he’ll used a mask of his former face.

Peyton was a hard-working family man. He believes that a strong man can take care of his entire family himself. He still loves children and animals and still has a soft spot for both.

Westlake has more or less accepted his exile from society in the existence of his Darkman identity. This is because he knows that he makes a difference in the world. His main intention is to destroy criminals by use of subterfuge and science.

Darkman’s temper is horrible. He will rage madly in the lab whenever an experiment goes awry. He’ll also rage against criminals if he sees an unjust act or a enemy. In such instances he definitely tries to kill them all. The rage originates from his horrible traumas and from the lack of any physical sensations.

Westlake is fully aware of the reasons for his rage and acknowledges it clinically. He gets great relief from helping innocents and would, without a doubt, give his life in saving others.

Darkman would like to return to his former life. Thus, he will accept experiments and treatments that have a chance to cure his situation.

His mind was horribly scarred by the destruction of his body. As a consequence, he experiences traumatic flashbacks when confronted by explosions or the same threats and gloating he heard that night in the lab. He also hates to be called a freak.

He’s truly alive in his lab when planning something for his opponents and then works tirelessly. He’ll speak to himself and break out in maniacal laughter at times.

(Upon throwing a neural disruptor in the eye of an opponent and activating it): “Mwhahahahah ! Looks like you got an eye-full !”

“Do you need a lift ? (lifts up opponents and throws him away)”

Darkman often uses disguise masks of his enemies in order to infiltrate the opponents organization and life. These masks are made of synthetic skin, but they possess a limitation. Visible light catalyzes a cellular disintegration process that, from the point of first exposure, will completely destroy the mask in 99 minutes exactly.

The superior quality of Darkman’s masks is rated at 09 APs. This serves as the APs of OV/RV for any Perception Check to see through the applied disguise. It normally takes 09 to 13 APs of time in his laboratory to prepare a full mask of any person, which also requires a good photograph.

These masks can then be carried around by Darkman until they are needed. It’s actually impossible to see him carry any masks at all until they are suddenly used. Occasionally, Darkman carries around masks that he couldn’t possibly have made in the laboratory. Under such circumstances Darkman can create any needed mask for a fee of 5 HPs. 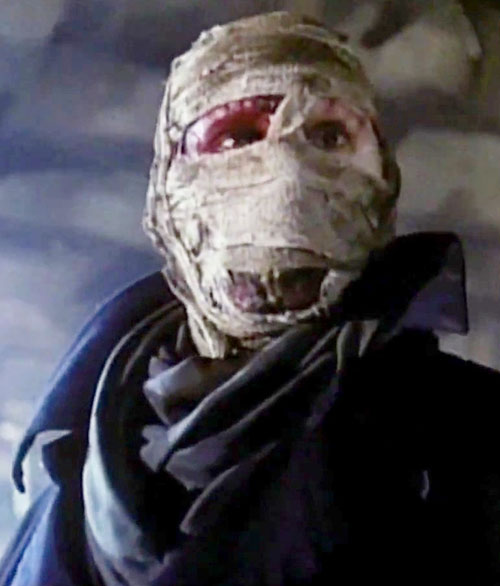