This is the second half of Darkstar (Laynia Petrovna)’s character profile, to facilitate reading on smartphones.

The reading order so you can understand everything :

Ms. Petrovna resumed her service with the Soviet Super-Soldiers. And within mere months, her American experiences started paying off.

Having fought alongside Iron Man, she knew enough to defuse a fight between Stark (plus Jack of Hearts) and the Soldiers. The Soldiers could thus join Jack of Hearts and the Knights of Wundagore in repelling an attack on Earth by the Colonisers from Rigel.

(There isn’t any mention of Laynia being in trouble for defecting. This reinforces the impression that her time in the US was approved by her superiors. They did seem nervous upon learning that she was cooperating with Americans, though.)

Subsequent events are chronicled in our Soviet Super-Soldiers team profile.

In 1991, Darkstar was on a diplomatic tour where she represented the Soviet Union. While at the UN she met with the Black Widow. Ms. Romanova sought news of Mr. Bruskin, their now-aged former trainer.

The pair was attacked by an entranced Starlight (Tania Belinskaya).

Once Starlight was freed from her mental control, she explained that the Presence’s sanity was more damaged than ever before. This likely was a consequence of Maelstrom having used Mr. Krylov as a pawn to nearly kill cosmic entity Eon.

Subsequent events are chronicled in our Siberforce team profile. 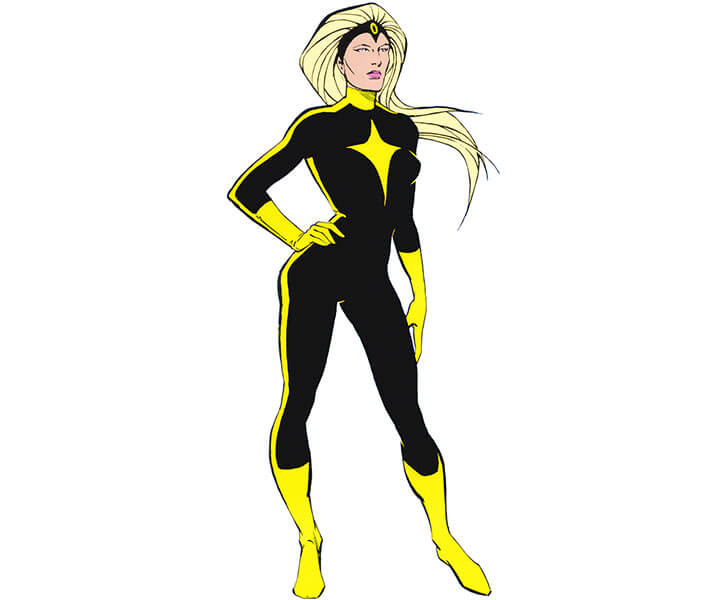 Most subsequent events are in our Winter Guard team profile.

There, she became mind-controlled by Black Death (Ivan Kivelki). Darkstar then ambushed an X-Men team to reel in the Beast (Dr. Henry McCoy).

However, the X-Men and Darkstar eventually took Kivelki down.

Ms. Petrovna took him prisoner. She then sought to expose the illegal and unethical projects that had turned him into Black Death. 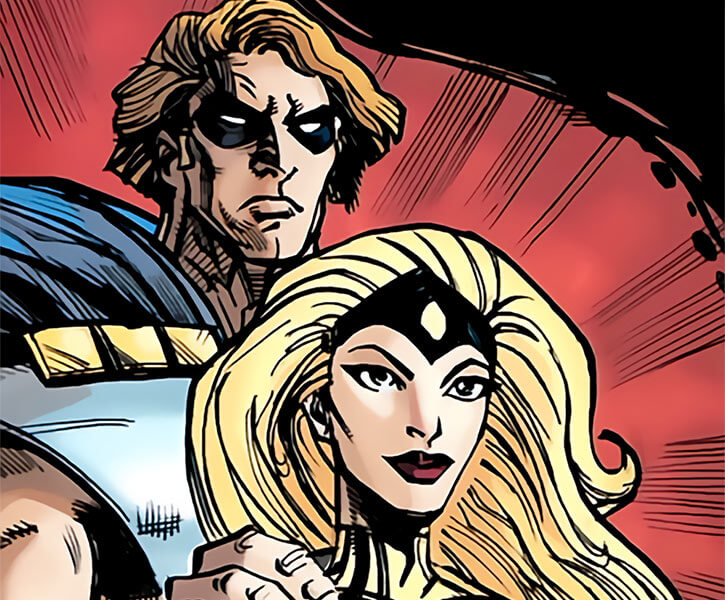 This team responded to an accident in the Chunnel  . However, they realised too late that they were actually facing one of the Weapon Plus super-prototypes – Weapon XII a.k.a. Huntsman.

Unprepared, the team was overwhelmed.

A force response from Phoenix (Jean Grey), Professor X and the freshly-recruited Fantomex (Charlie Cluster-7) came in just in time. However, much of the initial team was now under the control of Weapon XII, a sort of bacterial hivemind.

Fantomex reached the kill switch to execute Weapon XII. However, the Weapon XII-infected Darkstar was killed in the fray.

She was buried in the Père-Lachaise cemetery.

Here’s her version of Oy, to ne vecher (“Heh, it’s not evening yet”). It’s an old poem about a Cossack leader having a darkly prophetic dream.

The Russian government found ways to use Darkstar’s DNA (plus her old Phobos pendant) to confer Darkstar-like powers to other women. Several Winter Guard members, including Vanguard, resigned in protest over this.

According to the Presence, Darkstar’s shadow double had bonded with the Phobos-issued pendant when her material body died.

A woman whose DNA had been modified to include some of Darkstar’s could thus attune with the pendant. Then attach Laynia’s shadow double to herself.

The first successor, Sasha Roerich, likely became Darkstar during the mid-2000s. However, she was killed in action in 2010. One Reena Stancioff succeeded her.

(In a single panel it’s misspelled “Stanicoff”, which is unfortunately the spelling my brain insists is correct.)

In 2010, Darkstar’s corpse was stolen by Selene Gallio.

She reanimated it using the techno-virus. A Darkstar techno-undead was thus part of Selene’s Necrosha plot.

For psychological leverage, it primarily attacked Iceman. However, Cyclops (Scott Summers) then damaged it enough to keep it out of the battle.

By this point, Vanguard’s plan to resurrect his sister was also nearing its end.

Vanguard had struck a deal with time master Immortus. In exchange for a year of exterminating Dire Wraiths in Limbo, Immortus would return Darkstar to life.

At the very end of this service, Vanguard and his Protectorate team returned to Earth. They helped defeat a Dire Wraith army. With this victory, their service to Immortus would be over.

During this battle, a Dire Wraith slew Darkstar (Reena Stancioff). It could thus duplicate her form and her DNA. From there, the Wraith used the pendant to bond with the shadow double and wield the Darkforce.

This is apparently where Immortus intervened. The Darkstar Dire Wraith was overwritten by Laynia Petrovna, who was reborn in this body. She promptly used the Darkforce to kill the few Dire Wraith survivors next to her.

Apparently, her new body is a Dire Wraith body permanently locked into the shape of Reena Stancioff.

Ms. Stancioff once mentioned that she acquired a new appearance during the genetic surgery to turn her into Darkstar. There was an implication that she now greatly resembled Laynia Petrovna.

In the aftermath of the big battle, the core team of Russian heroes was very much a return to the 1980s Soviet Super-Soldiers – Dimitri Bukharin, Mikhail Ursus, Nicolai Krylenko and Laynia Petrovna. 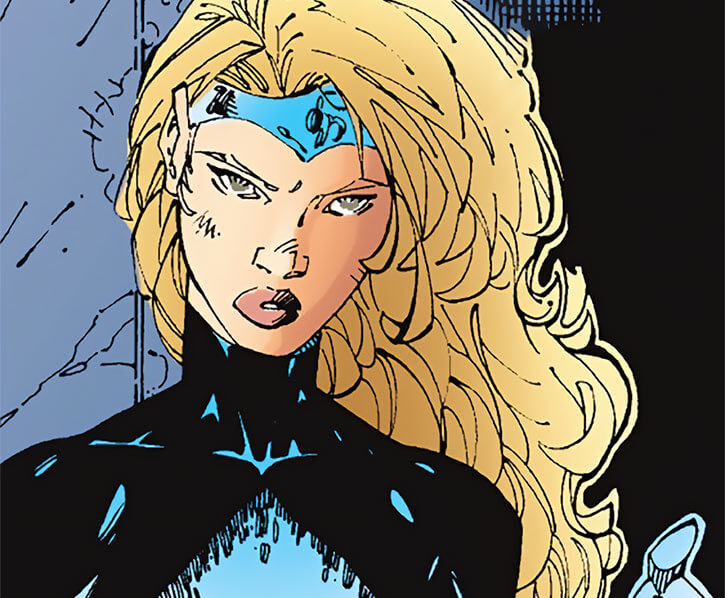 Most 2010s events are described in the Winter Guard team profile.

In 2017, Darkstar also attended a Champions of Los Angeles reunion. They had gotten together to honour their recently-deceased leader, the Black Widow.

The reunion also involved fighting Sentinel replicas. And serving as wingmen during a date for a now-more-mature Bobby Drake.

(During these scenes the Champs displayed much more chemistry/sympatico than they ever did during the 1970s. It is thus possible that there were a series of informal reunions over the decades.)

Darkstar is usually drawn with blue eyes. Our background block kept the official brown, out of blind respect for authority. But brown doesn’t show up much.

Her 1970s costume was tight, high-waisted purple trousers, a dark blue tunic (perhaps silk) with bouffant sleeves and dark leather boots. Plus her headband-like tiara – some people are huge fans of the tiara.

If the tunic were a blouse, this outfit wouldn’t be dramatically different from some 1970s women’s fashions. Especially with the large pendant she wore.

She switches to the black body glove in 1980. Her jewel is removed from the pendant, and set on her tiara.

However, she rips the jewel from her tiara in 1981. Its setting is then replaced by a decorative circle or diamond motif.

The uniform with the silver “Kirby crackles” motifs instead of the yellow diamond appears in 1998. She also has a variant costume where the silver is instead golden.

Darkstar is a white hat. She’s all about protecting the people, minimising harm and striving toward justice. She’s nice, really.

Notably, she’ll favour non-lethal tactics. She’d rather immobilise people in Darkforce bonds, or disable their weapons, or throw them into nearby cold water to take the fight out of them. If she uses blasts, these’ll normally be concussive ones.

Darkstar’s lines are about as wrought as her brother’s. Yet, she sounds markedly less pompous and more like a Romantic  poetry fan.

There’s an implication that the Soldiers spent years living in dire conditions, with few comforts and no money. This was during the era where they protected the Soviet (later, Russian) people despite being hounded by the government.

As a result, Darkstar always appreciates being able to do quiet, simple, comfortable things. Such as getting good food, or — especially — catching up with books she’s been meaning to read.

She also seems fond of art museums, such as the Getty  . And some US cable dramas.

Laynia and Ikaris of the Eternals seemed interested in each other. But these were just exchanged glances. 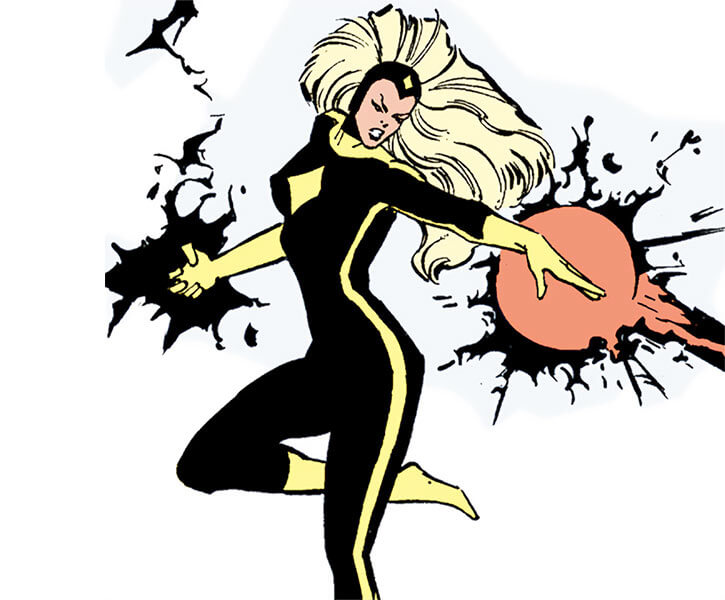 “He… is hesitating — as if he battles with his own soul !”

“Dynamo, no ! The creature you attack is no creation of the Forbidden Zone !”

“The Darkforce will spirit him from this troubled clime to distant Leningrad, where he may receive the best possible medical care !”

“Go forth, my Darkforce ! Feed upon these instruments of the aliens — ere they can transform themselves into fearsome phantoms !”

“Brawling in an environmentally sealed spaceship with powers as extreme as ours is not a very bright idea… Let me see if I can dissuade our opponents by blinding them all with Darkforce.” 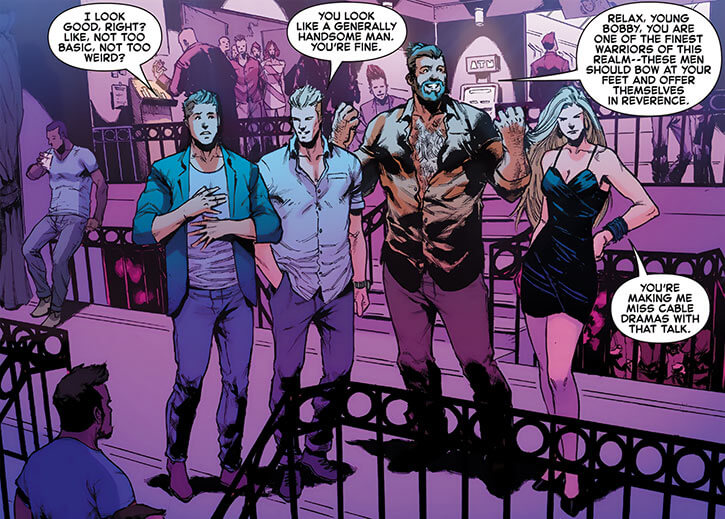 There are few sympathetic Soviet characters in the DCU before some Ostrander work (Firestorm then Suicide Squad).

And the main one that comes to mind, the Negative Woman (Valentina Vostok), is a tad too close concept-wise to Laynia.

If you want to use her anyway in the DCU :

Evasion is Aerial Only and Ranged Only.

Establishing a non-combat telepathic communication with Darkstar is 3 APs easier than it would otherwise be. This works :

This is demonstrated but once, in Champions Vol. 1. You could ditch this aspect without losing much. But I’d consider it an odd little remain of… whatever her original character concept was.

*Normally*, Darkstar would be written as a Force Manipulation character. Doing so would have been entirely fine. It’s what she does.

But we’re doing full on Writeups.org research, complete with briar pipe and academic vest w/leather elbow patches. So let’s go for a modelisation of everything she ever did in the comics.

It’s clearer about what she cannot do, and not much longer. Though it wouldn’t work if we didn’t have the detailed Force Wall Power.

She prolly has a Familiarity with a type of books. But we just don’t know what she reads. Could be romance novels, could be combine harvester maintenance manuals.

I’ve more or less let Warp do the job of Remote Sensing. If her stats were simpler I prolly wouldn’t have cut this corner, but here I feel it simplifies things.

It also seems that one could leap through a “viewport” and appear next to Darkstar (though she shuts her Warp down before Hercules actually reaches it).

Yes, both Teleport *and* Warp. That’d make no sense if working with a character creation budget. But we don’t, and it models subtle differences between Darkstar’s offensive teleportations and mobility teleportations.

Insta-Change is only clearly shown in the Soviet Super-Soldiers one-shot. It’s contradicted in Iceman (2017 run) and an early Champions panel. But since we also see Reena Stancioff conjuring her costume on the fly…

I haven’t modelled Laynia wielding a Darkforce greatsword. She only did that once and in an abnormal state. It likely had AV 07 EV 10.

Darkstar once (Champions Vol. 1 #16) does Los Angeles to Washington D.C., carrying the entire team within a Darkforce bubble, within minutes. That’s something like 15Kmph (24,000 km/h), or 13 APs of Flight.

(Even old DCH hands do not always realise how *fast* movement speeds in AP escalate.)

She does something similar in X-Men Unlimited #28, going from Moscow to the Siberian boondocks.

Why ? Why not just teleport like she otherwise does ? I struggled with that for a bit. Until I realised that limiting how many passengers she can teleport was a simple way to have both scenes make good sense.

It also matches a scene where Vanguard is surprised that one of Darkstar’s successors can teleport an aircraft and a full team. Though, in DCH terms, Ms. Stancioff was using Warp rather than Teleport. 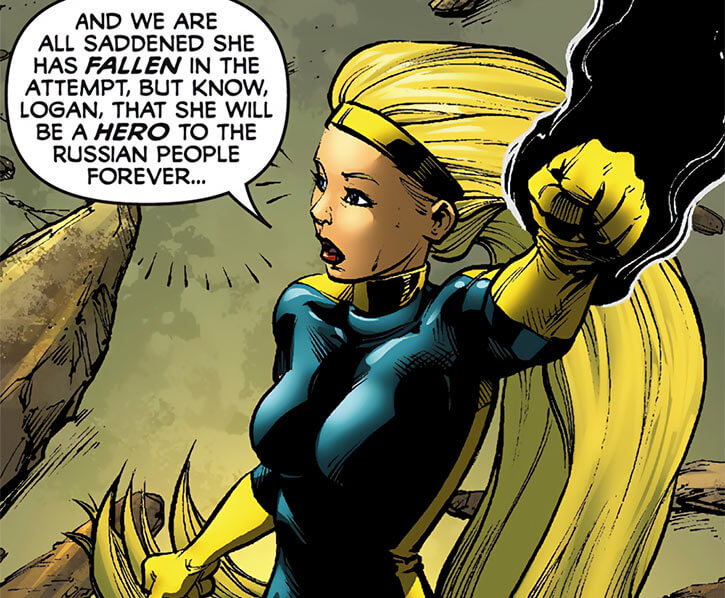 Likewise, she once seems to reanimate a wrecked Sentinel robot. This scene was conservatively interpreted as telekinetically using the inert robot to bash her opponents.

There’s a confusing bit of dialogue about whether she needs to have seen an area before she can teleport to it. In hindsight, I think that what she actually meant was that she could teleport to the Moon now that she knew there was an area with a breathable atmosphere.

Laynia once manages to trip Cable (Nathan Summers) in hand-to-hand combat. But Cable had put himself in an inept position due to overreliance on his psimitar. And thus ended in a verizontal position.