Darkstar is one of the core Russian superheroes in the Marvel Universe.

She first appeared in 1976, and she’s kept returning since. This seems tied to her simple, effective visual design and powers.

Darkstar and her teammates are strongly associated with writer Bill Mantlo — though Laynia herself was created by WORG-favourite writer Tony Isabella  .

A prolific Marvel Comics writer, Mr. Mantlo was grievously injured in a 1992 hit-and-run traffic accident. There have been a number of campaigns to help support the costs for his care.

As of this writing no such campaign is running. But you can check the Bill Mantlo page  which has instructions about ordering his biography to raise funds.

The reading order so you can understand everything :

Our Darkstar profile covers everything from 1976 to 2018 (inclusive). 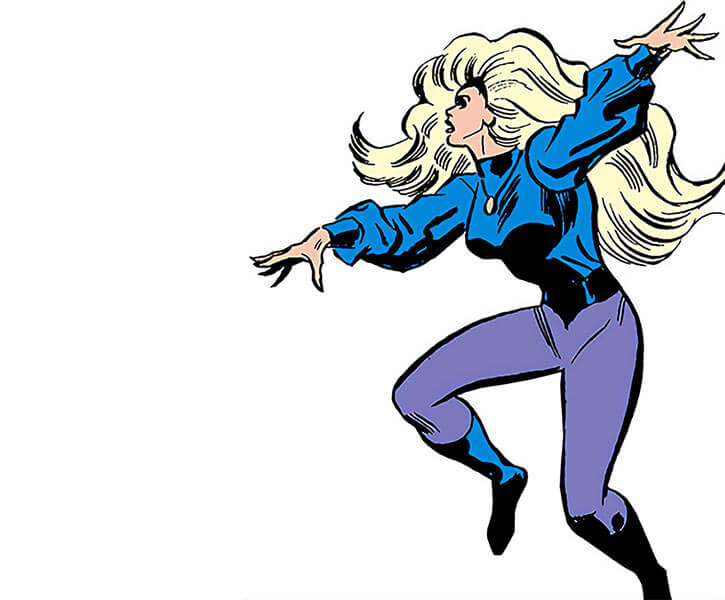 “Laynia Petrovna” is her official name, and the one she uses. However, it was given to her by the State to obscure her parentage.

Assuming that her parents did plan to call their kids Nicolai and Laynia, her name should have been Laynia Sergeyevna Krylova. And her twin would have been Nicolai Sergeyevitch Krylov.

(The Presence refers to Darkstar as “my little Laynia” when he learns that she’s his daughter. So the intended-by-the-parents first names likely were retained. I guess that the KGB can be sentimental after all.)

More generally, the names of Russian characters in older US super-hero comics tend to be weird. Confusion between patronymics and family names, confusion about feminised family names, a tendency to overuse some stereotypical first names, etc..

Darkstar seems pretty Old World in style. And I randomly remembered that Georgians have kinda-Corsican-style polyphonic singing, so I assumed that Russian traditions also had something along those lines…

Laynia Petrovna has robust training and experience in superhuman operations.

Plus excellent physical conditioning, including acrobatics training and hand-to-hand combat.

She is a homo superior mutant who exists on two levels. One is her physical body, and another is an invisible “shadow double”.

The double serves as an interface with the DarkforceJet-black, solid energy from another universe DimensionOther realms of existence that are not our universe. This allows Darkstar to deploy the Darkforce in the physical universe.

(Early on, Darkstar referred to the Darkforce as a sapientCapable of intelligent reasoning creature. My No-Prize HypothesisA made-up explanation to plug a plot hole is that she was actually perceiving herself, not being yet aware of the “shadow double” thing.)

The Darkforce Dimension is… something that contains a variety of… dark… forces. Many superhumans with a “darkness” theme derive their powers from accessing this dimension.

One common application is to shift from the normal universe to the Darkforce Dimension, then pop back up some distance away. This way to teleport is used by Silhouette, the Vanisher, Spot, Cloak, Doorman, etc..

Others bring different kinds of “dark” energy or matter from this dimension. Such as Quagmire’s gunk, Left Hand’s blasts, Asylum’s mist, etc..

Darkstar manifests the Darkforce as pitch-black solid energy. This is similar to what Green Lantern (Hal Jordan) does over at the Distinguished Competition. 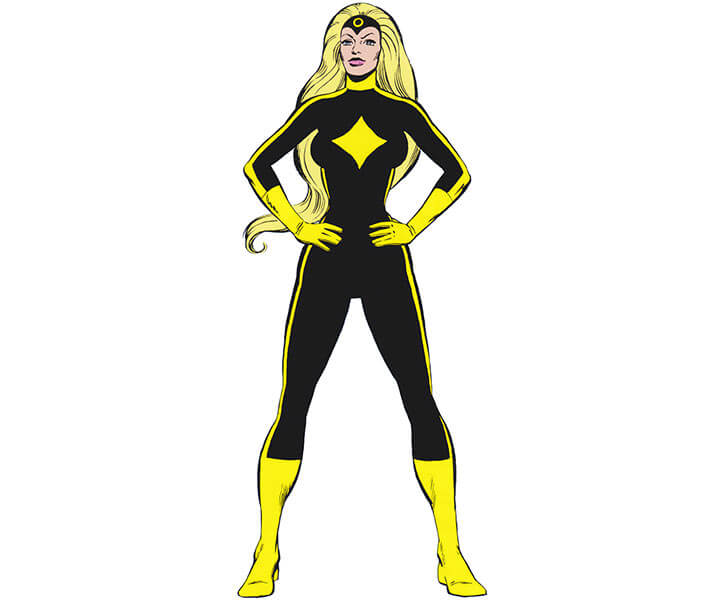 A constant fear that…

Laynia can thus emit and control simple masses such as beams, walls, bubbles, shields, tendrils, bonds, pillars, etc.. On occasion she has done GL-style giant hands, bulldozer blades, or pincers. And, once, a giant spoon.

This isn’t as versatile or as powerful as what Hal does. But it still allows for extensive control of the battlefield.

Interfacing with the Darkforce Dimension also allows her to :

Laynia can also “program” her Darkforce constructs to dissipate after a set time. Their maximum lifespan is unrevealed.

Being in the Darkforce dimension is uncomfortable, and this “place” has some odd properties. But teleportation through this dimension is usually so fast that people just feel a chill.

On one occasion, Darkstar opened a gateway into the Darkforce Dimension for several minutes. The Black Widow (Natalia Romanova) took an unconscious Red Guardian (Tania Belinskaya) within, to have her break the mental hold of the Presence (Sergei Krylov).

Presumably, it’s just that the Presence’s psionicPsionics are sci-fi style psychic powers powers do not work across dimensions.

Darkstar once delivered a rage-fuelled, meant-to-kill Darkforce attack. This volley of knife-like Darkforce blades was only barely stopped by Quasar’s force shield. She then formed a Darkforce greatsword, proficiently wielding it in melee.

Both these tactics are not part of her normal m.o., and were produced in an extreme emotional state.

Ursa Major once mentions that Darkstar has occasionally lost control of her Darkforce, but never with severe consequences. That presumably happened early during her career.

And as you quicken up your pace

This contrasts with her teammates Vanguard and Ursa Major, who are more hard-charging.

She’s also highly intuitive. If Darkstar gets a sense of a situation or person being this or that, she’s prolly right. This is presumably a side benefit from her dual nature.

There’s also some evidence that it’s easier than normal to establish a telepathic link with her.

(Early on, the character concept was a bit more witchy and a bit less Green Lantern. The intuitive accuracy is a leftover from that. For instance Darkstar once reflected that her birth made her a “true unhuman”, a bit like the Ghost Rider. But this angle was soon dropped.)

Though she seems mentally strong, she still could be mesmerised by Doctor Druid (Anthony Ludgate).

Darkstar evidenced a strong power of recovery, even by the standards of comic book characters. I don’t think it was intended by the writers, but almost every time she passes out, is wounded, etc. she gets back up weirdly quickly, fresh as a daisy.

Maybe your mind is playing tricks

Vanguard and Darkstar reportedly became more powerful in 1981. This occurs when they removed the draining devices given by Professor Phobos.

In practice, little difference is observable. Darkstar was depicted as being very powerful in Champions. And her bro had been winning slapping matches with the Hulk.

(Darkstar tended to pass out due to stress exerted on her Darkforce constructs before 1981. But it usually was because her constructs were attacked by heavyweights such as Hercules, the Presence, Magneto, the Hulk, etc..)

(Also, I don’t think that most cases where she faints for a short spell, seems exhausted, etc. correspond to, in DC Heroes RPG terms, actual RAPs. It hinders her for mere seconds, and is thus cosmetic.)

It seems likely that this body presents special properties. But there’s zero data about that. 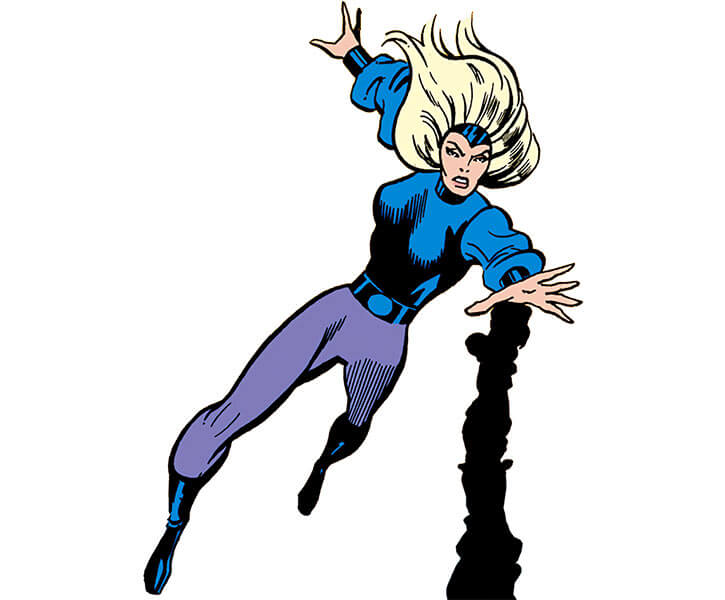 As a baby, Ms. Petrovna was delivered to the care of Professor Piotr Phobos. She was never told about her parents. Or even that fellow student Nicolai Krylenko was her twin brother.

Laynia grew up in Phobos’ academy to become a superhuman operative for the State.

But you knew all that, since you already read the Soviet Super-Soldiers article with rapt attention. So let’s move on to what isn’t covered by the team profile.

Blame it on the grey wolf

Laynia and Nicolai were born in Minsk. Back then it was the capital of the Byelorussian Republic, itself a part of the Soviet Union. Nowadays, Byelorussia is a separate country called Belarus.

However, Nicolai and Laynia grew up in Moscow. They thus consistently identify as Russians.

There are vague hints that the Black Widow (Natalia Romanova) and Darkstar knew each other before the 1970s. But it’s just odd, indirect implications in dialogue. Prolly nothing.

In 1966 or 1967, the Black Panther (King T’Challa) revealed the existence of Wakanda to the world. He also demonstrated that his country had mastered highly advanced science and engineering.

A meeting took place with the Security Council. However, rogue Soviet intelligence agency the Red Room had its own agenda. They kidnapped Nikolai, and forced Laynia to do their bidding in exchange for his life.

The Room injected an undercover Laynia among the Soviet representatives. From there she teleported the Winter Soldier (James Barnes) in for a stealth combat recon mission.

This was narrowly foiled by the Panther and Wakandan security, but Laynia and Bucky still managed to teleport out.

Laynia, you got me on my knees

In 1976, Darkstar was detailed to a mission in the US. The goal was to capture defectors –

Beyond Darkstar, the team was :

The Black Widow was attempting to make something out of haphazard superhero team the Champions of Los Angeles. But the Soviet team took out the Champs, then flew out with all their targets.

However, Darkstar rebelled. She couldn’t stand Bullski’s brutality, and Yuri’s blind craving for revenge shocked her. Though she couldn’t bring herself to take Yuri down, she left to join the Champions.

(Back then the Champions were the Black Widow, Hercules (Hercules Panhellenios), the Ghost Rider (Johnny Blaze), Iceman (Robert Drake) and Angel (Warren Worthington III). Ivan Bezukhov was a de facto member, but had to leave shortly after Darkstar joined.)

A dissident is here / Escape is never the safest path

Secondary sources describe Darkstar as having deserted to join the Champions. Likewise, the Americans around her assumed that she was a defector.

*However*, Darkstar once protests that she didn’t defect. But she never gets to finish her explanation.

We have zero clue as to what was going on. Perhaps Nick Fury and the Widow had been negotiating for Soviet heroes to briefly train with their American counterparts, and vice versa.

Back then it still was the détente era  , so it makes some sense.

The Widow supported Darkstar’s arrival. She even had Nick Fury of S.H.I.E.L.D. greatly facilitate and accelerate Petrovna’s immigration procedure.

(Honestly, I half-suspect that Natasha wanted to have somebody around who had read her favourite novels.)

Along with the Champions, Darkstar faced a number of menaces :

Iceman (Robert Drake) also enthusiastically flirted with Darkstar. Or rather at her — Laynia liked him fine, but she had zero romantic interest in him. Furthermore, she had trouble getting over Yuri Petrovitch.

(Back then, Mr. Drake hadn’t realised that he was gay. It would be decades before he understood why he kept running all his romantic relationships into the ground in short order.)

Besides, the team just wasn’t working. After the Rider moodily walked away, Darkstar was the first to admit that it all was a mess. She was also uncomfortable with Bobby’s unrequited affection. She thus flew off.

The second half of this character profile is there.