Darkwing II possessed the ability to access an alternate dimension that he nick-named the “Shadowverse.” Through trial and error, Darkwing discovered that the “Shadowverse” touches our dimension in areas of utter darkness or deep shadow.

Though time passess in the “Shadowverse” at the same rate at which it passes in the earth dimension, distances within it are very different. A few steps in the Shadowverse could equate to half a mile in ours.

Though Darkwing had never been seen to shadowstep  more than 30 feet, presumably he could have used it to travel much farther distances.

By following a training regimen created by the original Darkwing himself, Darkwing II had developed his physical strength, agility, endurance and reaction times. He brought these to the same level possessed by elite Olympic level athletes.

He also possessed highly developed combat skills. He was capable of single-handedly rendering groups of men unconscious with little effort.

Darkwing used the same arsenal that his mentor did previously, with one exception. His utility belt was full of crimefighting tools including: bolas, wingdings, a grappling hook gun, etc.

In addition to the waist-borne arsenal, Darkwing’s uniform wore a lightweight exoskeleton . It enhanced its wearer’s strength by an astounding factor.

With some effort, the suit allowed Darkwing to hit hard enough to allow a being of Viltrumite levels of invulnerability to actually feel the blow. He wasn’t capable of hurting a being of that level of resilience, but having the blow felt is still an achievement.

The original Darkwing took on an apprentice near the twilight of his crimefighting career. Operating under the name Nightboy, the young man shared many adventures with his heroic patron. He even met and participated in missions with the legendary Guardians of the Globe.

When Omni-Man murdered the team, Nightboy took up the original Darkwing’s identity. He continued to fight crime within Midnight City. Unfortunately for the criminals within, the new Darkwing did not share his mentor’s reverence for life. Instead, he brutalized any felon that he came across. He eventually began to murder criminals outright.

Killings in the night

It was at this point that Darkwing II drew the attention of Cecil Stedman. Cecil, a highly ranked government official and Omni-man’s former handler, sent the young Viltrumite Invincible in to investigate the suspect deaths in Midnight City.

Invincible soon stumbled upon Darkwing. The vigilante was standing silently over a pair of corpses, seemingly lost in thought. The two heroes chatted until Cecil established that Darkwing had murdered these criminals.

When Invincible moved to take Darkwing into custody, Darkwing fought back to the best of his ability. The battle was laughably short, and Darkwing found himself imprisoned quickly thereafter. He was sentenced to life in prison, to be served without bail.

It was soon thereafter, that Cecil approached him, offering him amnesty in return for his unquestioning loyalty as well as his services in battle should that become necessary. Left with little choice, Darkwing agreed.

Darkwing next appeared during a conflict with the denizens of the underworld, who were working under the control of Doc Seismic. Nearly every hero in North America (including Invincible, the forces of Capes Inc., and the Guardians of the Globe) were captured and helpless.

This is when Darkwing intervened with an army of Reanimen behind him. They tore into the underworld forces, and freed the captured heroes. The freed heroes, alongside the Reanimen made short work of the villains. But as the battle came to a close, Invincible surprised the gathered heroes by flattening Darkwing with a single blow.

Invincible tried to explain Darkwing’s criminal past, but none of those gathered were privy to the information. Cecil had apparently expunged the information when Darkwing was captured.

Invincible left Darkwing with the other heroes and went to confront Cecil Stedman, looking for answers. In the meantime, Darkwing was welcomed back to the fold by the heroes he had just helped save.

Invincible’s confrontation with Cecil, ended up splitting the Guardians of the Globe. Several members of the team remained loyal to Invincible and quit the team. Darkwing was recruited by Cecil to fill out the now vacant roster.

He remained a loyal member of the Guardians team. He even displayed regret over his past decisions. That lasted until the moment that he encountered one of the duplicate Invincible’s during the Invincible War.

While each of the alter-Invincible’s were powerful, the Guardians of the Globe were set upon by a particularly power doppelgänger of the young Viltrumite hero. This one was nearly as powerful as the original.

The doppelgänger tore through the entire team in seconds. He reduced several of its members to bloody pulps before they could even battle back. In the end, Darkwing sacrificed himself for his teammates in a moment of heroism that would have made his mentor proud.

While grappling with the doppelgänger, Darkwing used his only power and opened a portal into the Shadowverse. He then dragged both himself and the alter-Invincible through the portal, slamming it shut behind them.

What happened after that point is unknown. The only thing that is for certain is that neither Darkwing or the doppelgänger have been seen since.

Darkwing was a well muscled young black man, with close cropped black hair and no real discerning features. His costume was very similar to that of Batman’s. Which makes sense since he was a thinly veiled homage to the Dark Knight. (I’d also draw comparisons to Blackwing’s — Ed.)

It was made up of a grey and blue body stocking that covered his entire body. The costume was mostly blue, with swathes of grey on the arms and his main torse area. His shoulders, head, legs and a triagular shaped area on his chest and back were deep blue.

He wore a long scalloped blue cape that hung to his ankles in a bat-shaped pattern. His head was covered in a deep blue cowl that left only the lower half of his face exposed.

Darkwing wore a 1990s “Image” style utility belt around his waist. The belt was a brownish gold colour and was covered in a garishly large number of pouches.

Darkwing was essentially a good kid, that wanted to live up to the memory of his mentor and make the world a better place. He obviously grappled with his own morality, and with the loss of the original Darkwing, went too far during his battle with crime.

He had managed to come to grips with his own crimes and seemed to be truly attempting to atone for failings when he sacrificed himself to stop the alter-Invincible.

“Oh, you think I’m him, don’t you ? I’m simply continuing the Legacy. I was Nightboy, his assistant.”

“I’ll admit I’ve made some mistakes in the past — but that’s all behind me. I’m much better now !”

“The things I did in Midnight City — I thought they were right at the time — I thought it was necessary to regain some kind of… control over the crime in that place.”

“Maybe Invincible is right. Maybe I should be locked up for good.”

The simplest one would be to have Darkwing take the place of Jean-Paul Valley during the Knightfall arc. His stats would have to be ramped up some in order to deal with Bane, but he would easily slip into that role. 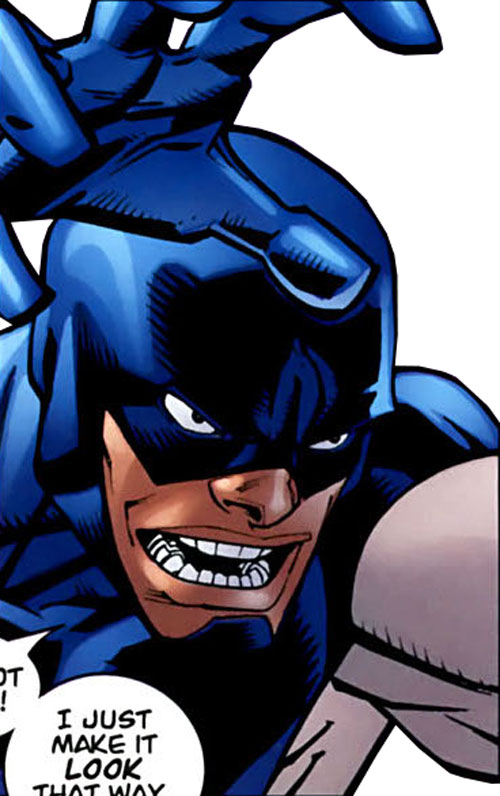 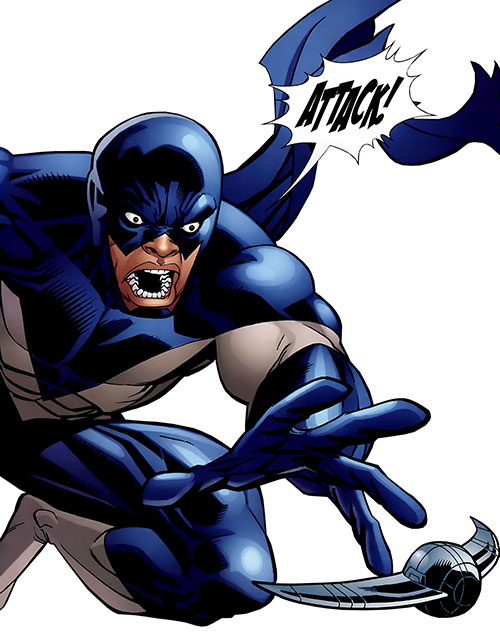 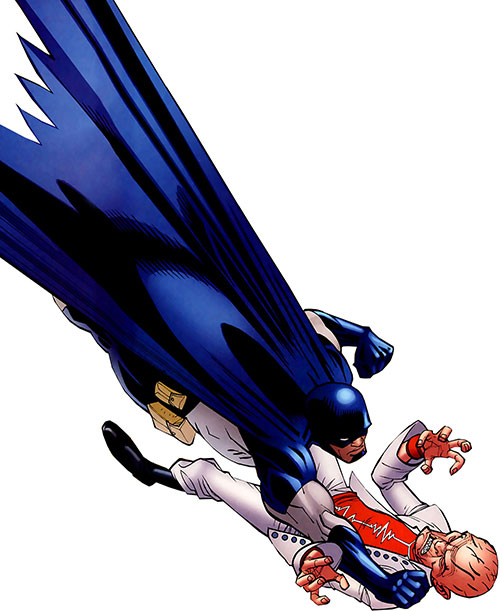 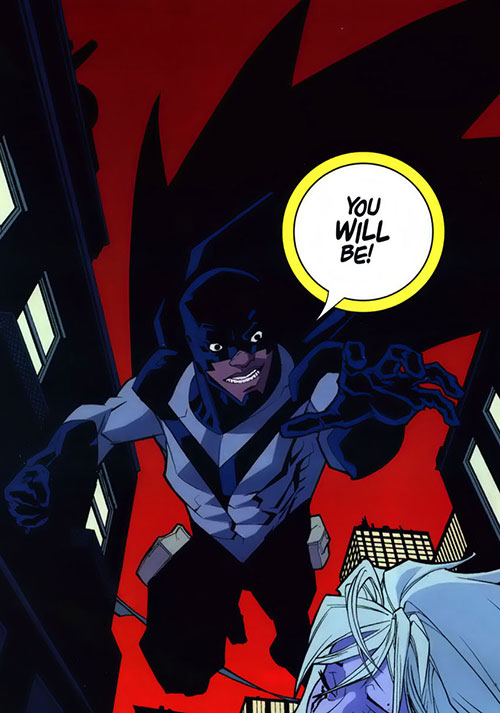 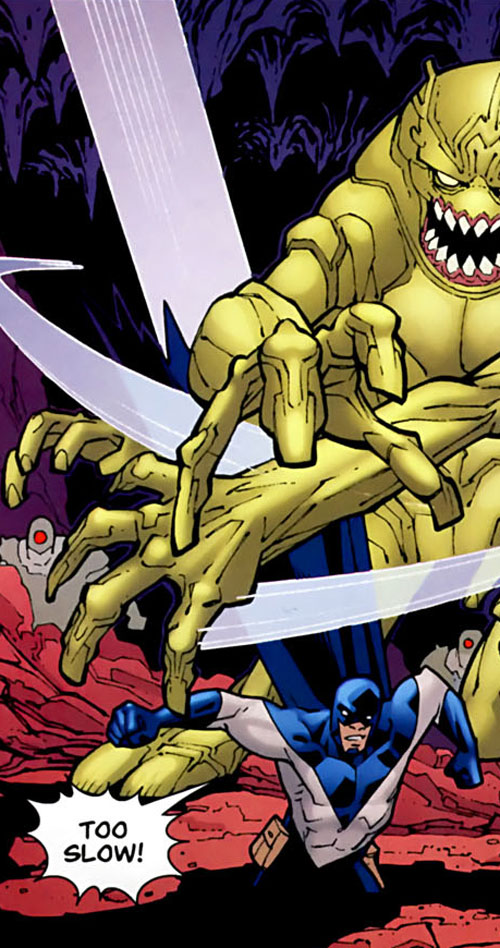 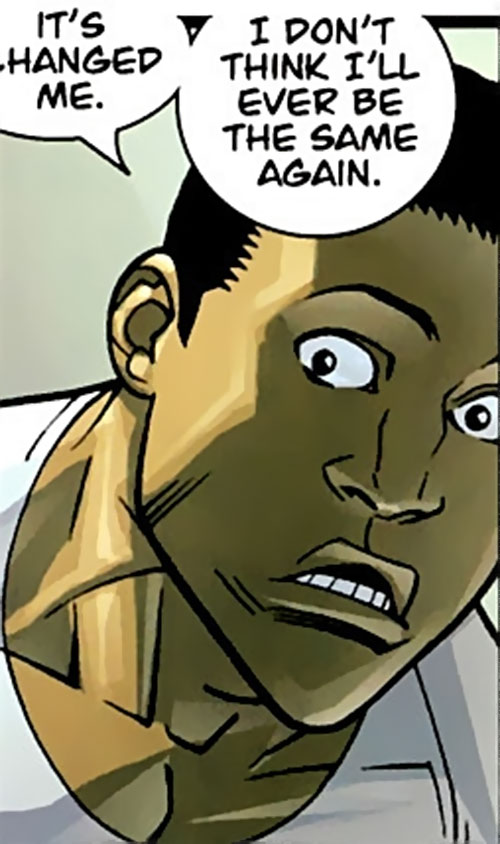