A strong deductive intuition, a broad knowledge of most areas of modern science, and a basic course in self-defense are Darwin Jones’ only abilities.

The first in five generations to break a family tradition of police work that stretched back to service with Sir Robert Peel  on London’s first modern constabulary, Darwin Jones went off to college in pursuit of a scientific career.

His father, a division chief of the Metropolis police, was desolated by Darwin’s decision. He spent many sleepless nights thinking of how to persuade his son to follow in the family calling.

While a student at Washington’s Georgetown University  (a scholarship given by Mrs. Eleanor Roosevelt), Darwin displayed remarkable skill at many scientific subjects. He obtained simultaneous degrees in physics and engineering.

Curiously, though, it was not his academic prowess that won him notice on campus, but rather the facility with which he solved a few minor campus mysteries. Darwin laughed off the incidents with a reference to his family background, but at heart realized that he had indeed inherited the family gift for deduction.

Still preferring the laboratory quest, he graduated and prepared to find employment in research.

Unknown to Darwin Jones, his father had been in contact with FBI officials charged with setting up a new government department. It would cope with the increasing number of scientifically oriented crimes and mysteries. The officials were looking for members of the Metropolis force who might belong to a new department, but were steered instead to Darwin.

Conflicted by the choice offered him, Darwin agreed under pressure from his father to give the federal job a try. He thus became the first chief of the Department of Scientific Investigation. He discovered that he loved the combination, and never left.

The vast majority of the Department’s cases are conducted quietly, and Darwin Jones has only briefly met a few of the Justice League members over the years. 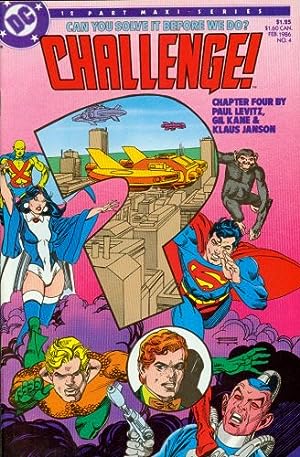