Davy Tenzer is an obscure DC Comics character. He only appeared in a 1975 Green Arrow/Black Canary back-of-the-book storyline, then a hackneyed Supergirl tale.

The schtick is that he’s heavily implied to be King David of Israel (דָּוִד to his friends). So you might be interested in developing that.

I suppose that it made sense for Green Arrow to run into a guy with a sling at some point. And since David famously used one…

Davy Tenzer is a dead shot with a sling. He uses polished black rocks — perhaps obsidian — as bullets. These hit curiously hard, and can easily shatter a lock or kill a man.

He is, of course, a gifted lyre player and an excellent singer.

Tenzer also insisted that he was centuries old. FWIW, the historical events mentioned in the King David tales are thought to have taken place during the Vth century BC, making him ≈2,500 years old.

It is implied that he has spy/operative skills.

He also knew Green Arrow and Black Canary’s secret identities, though they aren’t *that* secret.

And he could disarm nuclear warheads, which I wouldn’t call a common skills set.

Davy survives a seemingly fatal explosion. That may mean that he has special durability… or it may not. 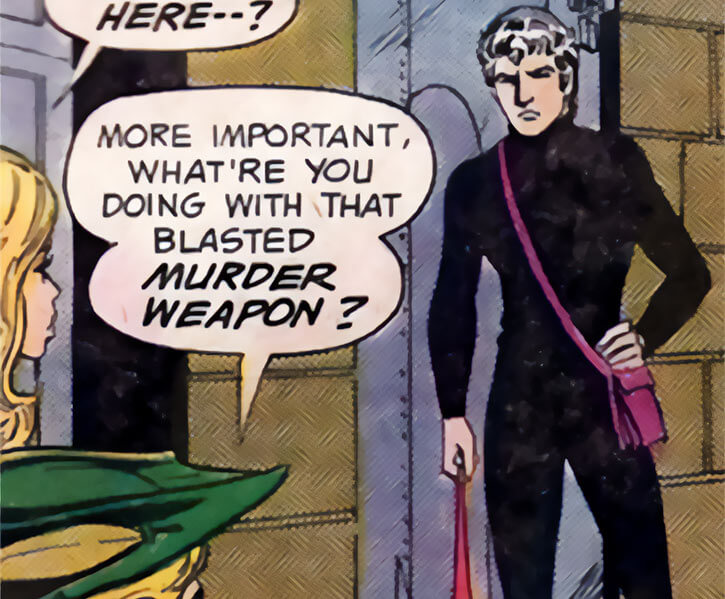 I have zero choice here, folks.

One Jesse Tenzer hired him to promote his chocolate products. Mr. Tenzer insisted on throwing in a bonus – one free week at the Squire’s In The Berkshire luxury resort for the couple.

(Davy later mentioned he had arranged these events. Perhaps “Jesse Tenzer”, Davy’s purported father, is an actor/agent of his supporting his cover. Or perhaps he is another immortal and things are complicated).

But you don’t really care for music, do you ?

Davy was also skulking around the Squire’s. He murdered four men during the nights, using his sling.

As Black Canary and her bad decision investigated, they were framed for the murders by resort owner Thurston Keane. As they fled from the police, Davy came to talk with the heroes.

He explained that he was after a terrorist organisation about to detonate nuclear explosives in major Middle Eastern cities. He also mentioned that he had fought them for decades — preventing them from murdering Charles de Gaulle  in 1961, and from starting a nuclear war in 1958 — though he hadn’t always been successful.

(Another statement is that he fought “the Organisation” for centuries. Perhaps there were several iterations of this power-mongering conspiracy.)

This seemed extravagant. But the teenager knew that the framed couple had little choice but to work with him. 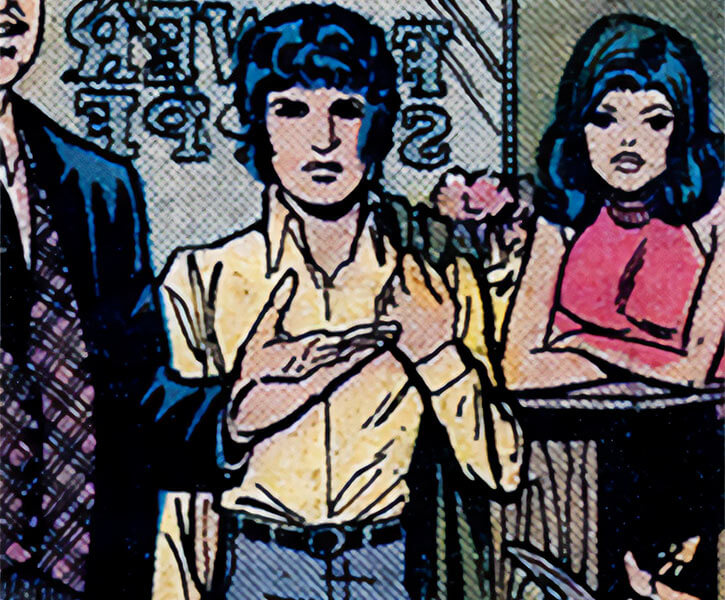 Your faith was strong but you needed proof

Davy led the couple to a hidden war room. Thurston Keane was indeed a terrorist leader, and his guard of mute commandos overwhelmed their opposition. The trio was captured, and held near the nuclear missiles.

They inevitably escaped, clashing again with Keane’s organisation. Tenzer removed the detonators from the warheads, then set these off.

As intended, the explosion collapsed the underground complex. It took out Keane and his goons and buried the disarmed nukes.

Green Arrow assumed that Davy had perished in the blast. But the youth recovered his lyre and sneaked away.

The minor fall, the major lift

A few months later, Davy showed up at the New Athens Experimental School, in Florida.

He knew that an undercover agent of the reptilian Serpent Race would soon attempt to strike Supergirl (Linda Danvers).

Working swiftly, the serpentine spy Beriak weakened Supergirl’s will, then put her under his hypnotic control. He sent Linda to conduct superspeed missions around the globe to prepare for the coming of the Serpent forces.

Then he took Supergirl to the Eden Oranges Grove, where a secret Serpent weapon had been buried. Linda’s super-energy would charge it fully.

(I sense there’s a literary reference going on… but what could it be ? WHAT COULD IT BE ?)

However, Davy played music to help Supergirl break the hypnosis. He then used his sling to stun Beriak for a bit, ensuring Linda’s swift victory. Again, the Serpent Race had been defeated by their old nemesis David !

David then left, moving in mysterious ways. Who was that maskl“enlightened man” in Hebrew, used here as a pun about the Lone Ranger’s tagline man ?

This was suggested by a reader – I think it’s an adaptation of Psalm 42, ken ? So let’s kick an advert out to make space for more music.

Davy Tenzer looks about 15. His features resemble the world-famous statue of David by Michaelangelo  . No, not the ninja turtle. Sigh. Or perhaps the da Caravaggio version  .

He’s usually wearing typical mid-1970s fashionable stuff, such as skinny jeans and high-collared shirts. When in the field he dresses, well, like Chuck Norris in The Octagon.

There’s a wealth of representations of King David as an adult, bearded man. But of course these came centuries later, to represent then-contemporary ideas of how a great Biblical King should look like.

He will readily explain that he’s centuries old. People presumably never believe him, so he engineers it so his necessary allies will have little choice but to help him. 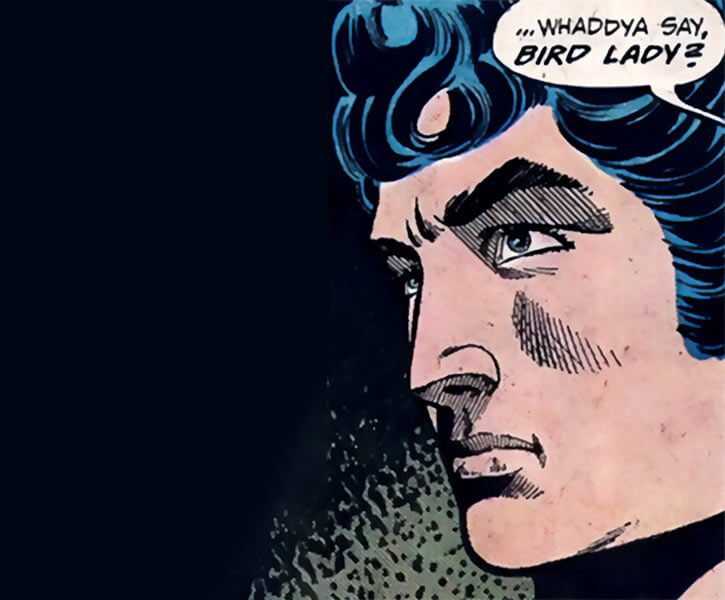 There’s little material, so much of the stats is arbitrary.

He could have a lot of other capabilities, including Invulnerability. You could check, say, the James Bond character profiles for ideas about contemporary notions of super-spies.

The Sling is written up en bloc since it was hitting weirdly hard. I’m not sure what was going on, so let’s go with the simplest possible stats.

The Lyre was also oddly durable.

This story is practically not factored into his stats (though it does confirm his high INF/AUR). Notably :

Writeup completed on the 3rd of November, 2019.