This article covers improvised firearms. Such weapons may be encountered in stories where the setting :

As always with Weapons Locker articles, we are interested in fiction, with an emphasis on comic books, action movies and video games. This is not any sort of study about the real world, far from it.

This article is dual-statted for both DC Heroes 3rd Edition and Mutants & Masterminds 3rd edition.

This article uses some technical firearms terms. If necessary, you should first check our Old West Firearms article. It has a compact explanation of all these things.

As always with resources article, this is a beta version. It’s not complete or polished yet.

Return of the caveat

As heavily emphasised through the article, this text is about firearms as depicted in comics books, action movies and video games plus some related genres like pulp novels. This is all about fictional things. It’s not meant to cover anything like real world weapons, which behave differently, and makes no claim whatsoever about realism.

The article does provide some useful facts and figure about how these things work. But this is all intended for verisimilitude, not realism. When the common depiction fiction is very different from the real world we’ll mention it, but the goal is not explain how it works in real life.

These are often called “zip guns”. Almost by definition, zip guns are artisanal creations. Thus, there’s going to be a lot of variation from one weapon to the next. The exception occurs when there’s so much demand that a “shop” starts producing a given model over and again using bulk parts.

But here are archetypal categories.

Note that these assume that mass-produced cased ammunition is available. If there’s no way to obtain cased ammo, then it is necessary to take a further step back and produce black powder firearms from an even older generation.

A very low quality, may-end-up-being-worse-than-useless weapon. Its main value may be as a compliance device, since it’s a gun and you can point it at people.

Stopping power and range are very low. Reloading is awkward at best. And there’s a genuine risk that the tubing might be too weak to contain the detonation of even feeble handgun ammunition. So this is meant to represent the lowest end zip gun.

For zip guns built by people with better training and experience with those, simple adjust the reliability upward.

This weapon appears in early Fallout video games. It is a good example of a post-apocalyptic firearm. Based on the in-game stats, the name and the tiny in-game sprite :

The action is too slow to make it a combat weapon. Furthermore, the pipe lacks rifling (so, yes, the name is technically incorrect). But it’s sufficient to shoot smaller animals and wound larger targets. It is also simple enough to be durable even without good maintenance and metallurgy.

Lastly, it requires way less training than a bow.

M&M Pipe rifle [Ranged ballistic Damage 3, Limited 1 (Needs a Move Action and two free hands to reload after every shot, cannot trade effects for accuracy, accuracy decreased by 2 for every Rank of Strength under zero)].

An example of a high end improvised handgun. This “model” features :

Such a weapon is a product of people who know what they’re doing. They almost certainly have been doing it for a while. Clearly it’s not a combat-grade weapon, but the performance isn’t that much worse than a compact self-defense handgun. Except it’s thrice the size. 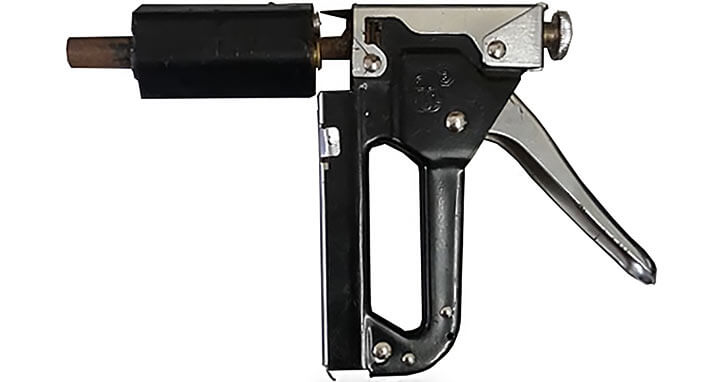 In DCH, a longer barrel with crude iron sights (a zip carbine, essentially) will expand the Range to 03.

The FP-45 Liberator was produced in the US during World War Two. The intent was to supply partisans with a crude but small pistol. It is a very simple design largely made of stamped steel, and super-cheap to produce. Thus, it is the sort of design one might turn to artisanally produce primitive holdout pistols using very basic machinery.

The Liberator has to be used within melee range. It is very much single-shot. Specifically, one uses a wooden dowel to get the empty casing out so another .45 ACP round can be manually inserted into the chamber.

It is clearly not a combat weapon. The plan was for these to be used in a point-blank surprise attack on an occupying soldier to take their weapon. Or maybe for terror attacks. How well it would have worked is… debatable. 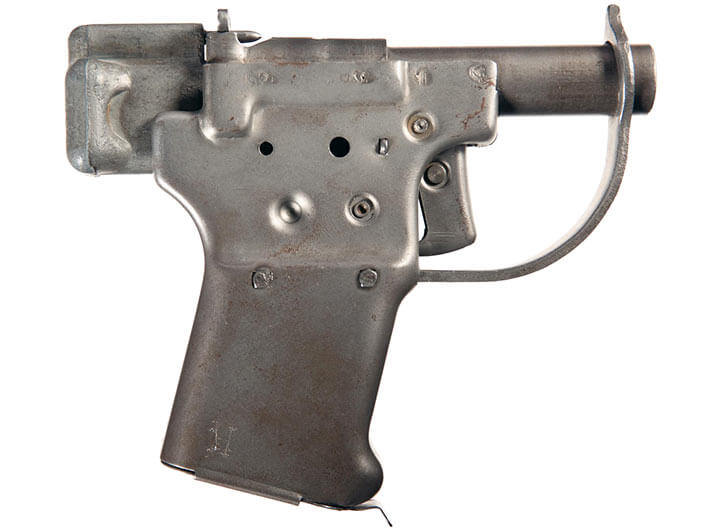 This is arguably the best approach to the zip gun business. But one needs to get sufficiently tough piping at the hardware store (or scavenge it, I guess)… and have shotshells. This is an artisanal, one-shot shotgun likely using a 20-gauge round.

Here, for story purposes we’re going to assume a 12-gauge buckshot round instead. That’s because shotguns in fiction are usually powerful firearms. For a more sensible 20-gauge, simply lower the attack power by one.

A “sophisticated” model will be break-open, with a simple single-action striker you fan back once the chamber is reloaded. This will have the same stats as the shotgun in our Old West firearms article, but probably be less reliable.

And once you can do that, a double-barrel sawn-off is also feasible (same article for stats). Here is an example of Fallout 4 concept art for the latter. 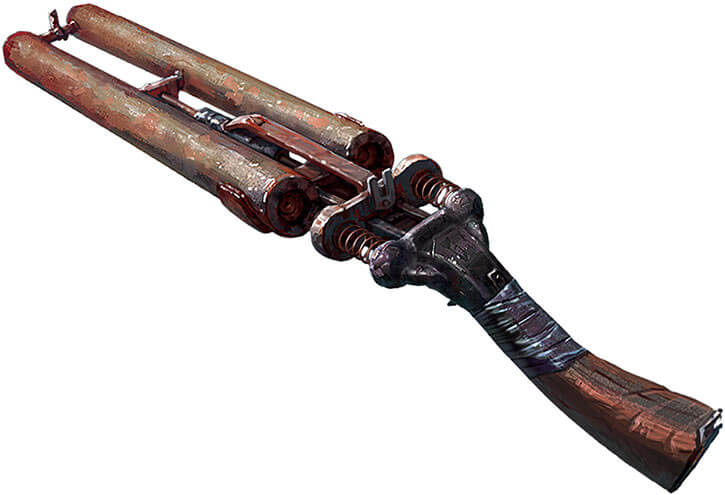 A zip shotgun could be as simple as a “slamfire action” shotgun, like the one seen in this video.

Such a minimalistic shotgun is only useable at close range, but it is a reliable as the cartridge it fires. There’s little that can go wrong, and the shooter is protected by two layers of steel pipe if a messed-up round explodes.

The obvious evolution from this design is having a longer “striker” tube. In this way the weapon can be carried with the “striker” tube already fitted around the barrel. Then you affix a vertical grip under each tube. It doesn’t look spectacular – it’s a pipe with two stick handles. But it’s easier to deploy in the field and it’s easier to aim.

We’re starting to leave the “improvised” bailiwick here. This class of weapons resembles an industrially-produced semi-automatic compact pistol, or an older revolver. It is obvious that it’s was crudely and cheaply done, but an inexpert glance might think it’s a “real” gun.

The trick is that the weapon is single-shot. It has no proper action. Thus, you have to manually insert a round in the chamber, lock it back and cock the hammer. Of course, this makes building the pistol dramatically simpler. Yet it can do the job when it comes to banditry, assassination, threatening unarmed civilians, surprise attacks to harass soldiers, vendettas, etc..

A lot hinges on what ammunition this pistol will take. It’s not rare for it to be chambered for crappy old handgun rounds because that’s what’s available and/or cheap. But it could also be chambered for a standard XXth century workhorse round such as 9x19mm or .45 ACP. *If* the metal and construction are tough enough.

In some cases, these weapons are even chambered for a rifle round, such as 5.56x45mm or 7.62x39mm. Such a one-shot, inaccurate weapon normally serves for point-blank assassinations, especially if the target is expected to wear an undershirt ballistic vest. 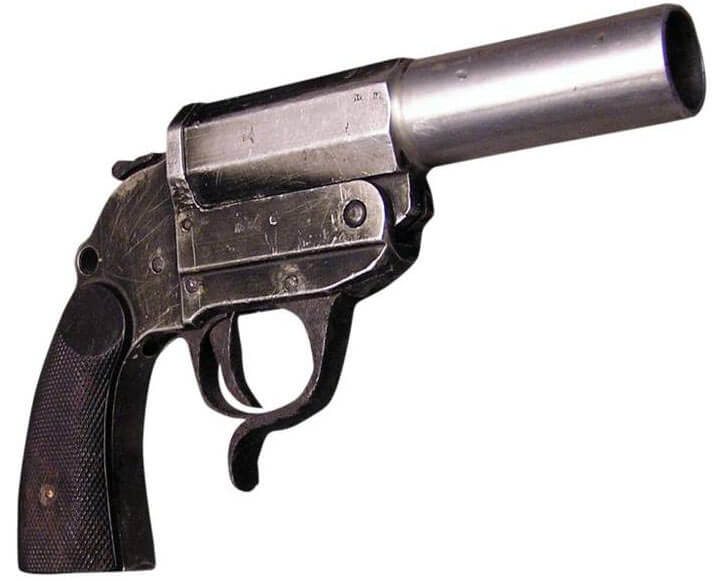 There has been noise about 3D printing allowing the willy-nilly proliferation of good zip guns. At this stage this remains perplexing, but one can note :

Now, the real advantage is that you download the STL file. So even if you know nothing about firearms, you may be able to snatch a design by somebody who really knows their business. And since the printer does the building, you don’t have to have machine tooling skills either.

Thus the appeal is more about know-how. Or rather, compensating for a lack thereof. But of course the guy in blue coveralls at the machine shop can download extensive design schematics, too.

For a slightly science-fictional 3D printer gun, you can simply use our “peashooter” stats in the Weapons Locker (Handguns #1) document. Or perhaps a derringer or holdout pistol if the emphasis is on stealth.

A really advanced, cyberpunk  3D-printed gun might be indistinguishable from a body pistol or even a plastic gun. These are from the other Weapons Locker (Handguns) document.

At this stage the “improvised” part is practically gone. It becomes possible to produce viable infantry weapons. But which ones ?

A tempting route is to produce submachinegun models that were specifically designed to be cheap and easy to build. Examples include the Sten, the Papasha, the Borz, the M3 “grease gun” or the Carl Gustav M45 (the “Swedish K”). As you can deduce, World War Two was something of a golden age for this type of SMG.

In DCH the R# will likely be a bit higher than for an industrially-produced model. In DCA there’s always a chance for a reliability Complication. Ease of maintenance and comfort of use will likely be so-so, and the weapon’s life span may not be the greatest.

But tactically, it works just like the real thing. Well, until it jams.

Other kinds of firearms are of course possible once you’ve reached this level of gun manufacturing. But submachineguns and machine pistols tend to match the need as they :

If these have to be produced under the radar, the barrel may be a smoothbore. Not using a rifled barrel removes an important clue for the police to detect that somebody is illegally making firearms.

The lack of rifling will diminish the range by 1 AP (DCH) or lead to Diminished Range 1 (DCA). Double that if the weapon is also produced with a very short barrel for concealability.

If more firepower is needed and rifle rounds are available, the logical next step is to produce Mikhail Kalashnikov’s immortal design as a variant AK assault rifle.

Because people be weird.

This is a series of small metallic tubes. They are taped onto a pistol-shaped block of wood, or… any other arrangement to aim them, really. Their rear end is closed shut, and a small hole is drilled near the base of each tube. Each tube is then packed with black powder (from, say, firecrackers) using a ramrod.

Then a bit of metal is rammed down the tube to rest on the blackpowder, and will be the bullet.

And thus you have a sort of repeater black powder small calibre pistol. Aim, bring a lit fuse in contact with the touchhole. The powder will hopefully go blam, the tube won’t, and the bullet will fly.

The ballistics are of course laughable, and the reliability dismal. *But* it’s still a fast-flying piece of metal, so with enough good/bad luck it might seriously injure or kill someone. It also has the advantage of not requiring cartridges.

Still, building “real” black powder weapons such as a blunderbuss or musket is preferable to this… contraption. Unless, of course, you only have small, short tubes and/or positively need a repeater. 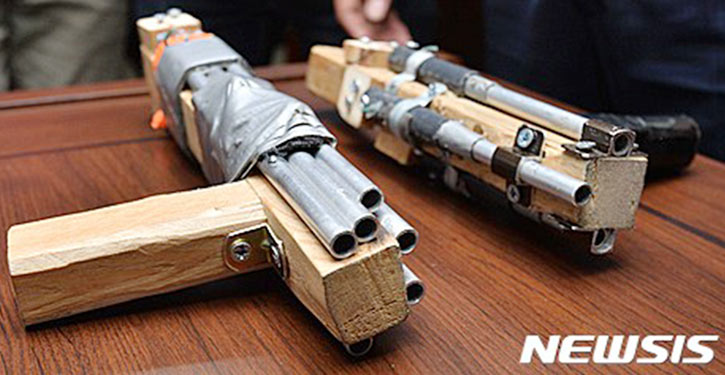 DCH Home-made repeater touchhole pistol [BODY 01, Projectile weapons (Diminishing): 02, Range: 01, Ammo: 07, R#09, Drawback: No reload in the field, Limitation: Projectile weapons has no Range, used the listed Range instead]. On the plus side, the R# will probably only incapacitate that barrel… unless the gun explodes, of course.

We’ll likely add more kinds of zip guns from time to time, when there’s time for more robust research. But for now, we think that’s the bulk of you what may need.

Writeup completed on the 2nd of February, 2017. 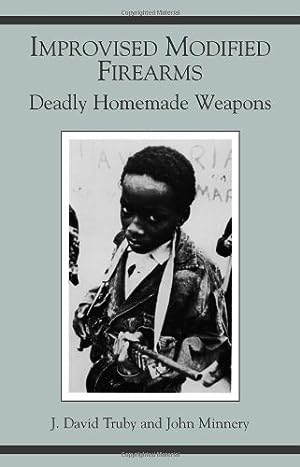 Book on the matter.
Advertisement