This FAQ article will tell you about the DC Heroes and Blood of Heroes tabletop RPGs.

What is the standard version of the game ?

Blood of Heroes Role-Playing Game : Special Edition, as published by Pulsar Games in 2000, is considered the standard version of the rules. The technical references are to this book.

There exists a .rtf summary about the differences between 2nd and 3rd.

Short history of the versions of the game

This core, groundbreaking design was largely the work of Greg Gorden  . Who is behind much of the power and elegance of the system.

While it is an interesting read, it is not recommended that one buys the 1st edition to run a modern DCH game.

Jack Barker  edited and pared down the DCH2E manuscript to assemble the Batman RPG. With an abridged list of Powers and a simplified Skill set in order to focus on Batman-style adventures.

The Batman RPG was released to coincide with the release of the Tim Burton Batman movie.

Like with the second edition, the work was headed by Ray Winninger  , who occasionally participates in the DCH/BOH community discussions.

In 1997, Pulsar reprinted the rules text from the third edition as the first edition of Blood of Heroes. Different title and publisher, exact same rules except for not mentioning any DC character.

The Sidekick Sourcebook, mostly based on the DC Heroes Mailing List‘s Fourth Edition Netbook project, was published by Pulsar in 1999. It could be considered edition 3.5. 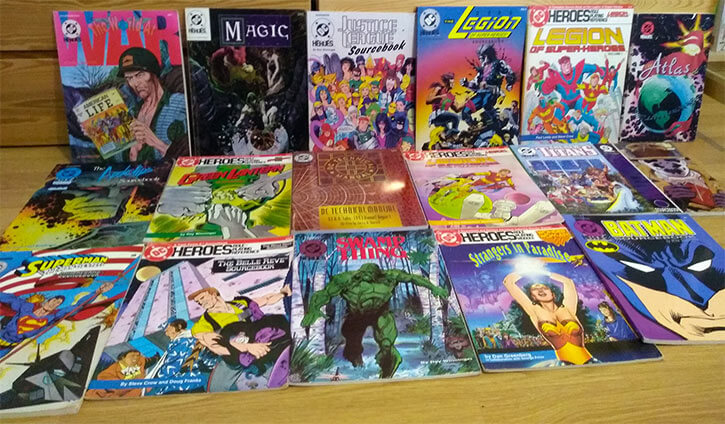 Some of the design choices live on with the current category leader, DC Adventures RPG. DCA drew inspiration for some of its features from the best traits from previous leading super-hero games.

This is especially true of the third edition of Mutants and Masterminds. It counts Ray Winninger as an additional designer and reuses signature DCH concepts.

Photo by the Irredeemable Shag  .

Pulsar Games, the publisher of Blood of Heroes, offered to sell the intellectual property pertaining to the game system. It was bought in 2004 by members of our community.

The current head moderator of the DCH mailing list and administrator of the writeups.org site decided not to participate to the initiative to avoid potential conflicts of interest.

The project of publishing a new, improved edition of the game system was stalled by unexpected legal difficulties that arose after the sale. As is common in such situations, the parties will not release statements about it.

The current edition of the rules thus remains Blood of Heroes Special Edition. It can still be bought in mint state from mainstream resellers, for instance at Amazon.com, so it’s not entirely out of print.

Distinctive features as a rules system

DC Heroes’ design was distinctive, and was further refined by a second and third edition. Remarkably, most of these features from 1989 would not be out of place in a modern game.

Some of its notable features are:

DCH/BOH is out-of-print (though the books can still be bought new from, say, Amazon). Most newcomers are therefore likely to learn about it from Internet discussions, posts, archives and reviews.

Beyond the usual vagaries of Internet opinions, there are two recurring bits of common wisdom about which you might want to hear from us. One is mostly true and one is mostly wrong.

That the production value of Blood of Heroes are terrible and the art and gaming universe are poor.

Most people will agree about the art and the production. Though it is the latest, most complete version of the text, it is not generally packaged or laid out in an attractive fashion. Please do not expect a gorgeous book if you buy it.

Many readers considered the gaming universe in the back of BOH:SE not to match their preferences. But others liked it and happily used it for extended campaigns. The first category tends to be more vocal than the second.

That the game lacks granularity, especially at the low end.

The range of feasible human attributes in DC Heroes is about 1-10, with the narrowest (reasonable human Strength scores) being 1-5. 1-5 is the normal range of human attributes in, say, the Storyteller system used by White Wolf. Or in most editions of Dungeons & Dragons where a dice roll modifier is derived from each attribute.

There are various approaches to further distinguishing the scores. A common one being to use Columns that are one AP wide from 1 to 10. And Hero Points can do a lot of the heavy lifting in representing different performance from folks whose raw capabilities are not that different from each other.

Writing up a lot of street-level, action-movie characters has led the writeups.org crew into a third direction concentrating on unique moves and abilities setting these characters apart, and thus to Schticks.

The original owners of Pulsar sold the company to its current owners in late 2003(1). The new owners have stated their intention to continue the Blood of Heroes line as recently as March of 2007(2). But they have cited the need to address certain issues first – including the legal question of the game‘s ownership.

“Our contract with DC specified that DC Comics holds the copyright on every product we released. If you check the indices, you‘ll note they all say ‘Copyright © DC Comics Inc.’

The contracts didn‘t specify anything like ‘Mayfair owns the copyright to the actual game rules, while DC retains the rights to its IP’ or anything similar, just ‘all DCH products are copyright DC Comics-period.’

This would suggest that DC actually owns DC HEROES. I know for certain that DC *believes* they own all rights to the game and everything produced for it and I suspect they‘re probably right.”

“Greg Gorden believes that his contract specified that he retained ownership of the DCH game system once DCH was out of print. When I was at Mayfair I looked for this agreement and couldn’t find it – but that doesn’t mean it doesn’t exist.

One potential problem is that it’s unclear that Mayfair could have made such an arrangement with Greg in the first place. Remember, the DC licensing agreement specified that DC would retain full and perpetual copyright over everything we released.”

“Pulsar licensed DCH from Mayfair but it’s not 100% clear that Mayfair ever had the necessary rights to grant such a license in the first place (#1 and #2 above).

I believe that Pulsar later made a separate arrangement with Greg.”(3).”

John Colagioia, one of the new owners of Pulsar Games, commented on their current status in March 2007:

“We‘ve been dealing frequently with the owner‘s legal team to try to get a handle on who owns what, who licenses/can license what, and how much room there is to change things. When I have an update of use, I‘ll relate it here, because it‘ll mean big things are coming on Pulsar‘s side, too.”(4)

Colagioia also stated that “While I‘d like it to be otherwise, this is about all I can say on any of these (and related) topics, and would very much appreciate keeping any further questions/speculation off-list, since such has the potential to damage our position at a sensitive time. I can‘t stop you, of course (and wouldn‘t if I could), but it‘d be appreciated.” (4)

Further inquiries regarding the current legal status of the MEGS System and any DCH/BoH properties would be best directed toward the above parties as appropriate, and we encourage everyone to follow John Colagioia‘s request.