Dead Aim is a huge combat cyborg with vast superhuman strength and energy cannons mounted on his wrists.

His visor is an extremely advanced piece of technology. It can track a given person’s aura and highlight it in red – making it quite easy to find somebody. Dead Aim can even see “residual auras”. These are visual impressions of the person in places where they recently were.

Dead Aim was a dangerous hunter-killer sent by Justin Hammer to hunt down the Foreigner. That was the last part of Hammer’s revenge – where the criminal billionaire took apart the Foreigner’s organisation, the 1400 Club.

It appears Dead Aim was in fact a turncoat member to the 1400 Club, hoping to obtain a highly-placed position in the Club after Hammer took over.

Dead Aim took command of other turncoats — three members of the Death Squad — to hunt the Foreigner down. But the Foreigner killed Whisper and Pulse. Dead Aim then blew Swift up for trying to run from the fight. The cyborg then personally assaulted the Foreigner and Spider-Man (Peter Parker), but they escaped.

However, Dead Aim’s special vision and expertise allowed him to trace and decode the signal from the Foreigner to his secret satellite. And thus Hammer could, at long last, blow up said satellite. Dead Aim, along with two other agents, Warzone and Battlescar, then attacked Spider-Man and the Foreigner anew. But they were defeated.

The satellite was about to come crashing on them, but Spider-Man deactivated its nuclear core in the nick of time. The three villains went to prison knowing Hammer intended to sacrifice them.

To the best of my knowledge, Dead Aim hasn’t been seen since.

Dead Aim wears the usual large black fedora and black trench coat when he wants to conceal his cyborg nature.

He’s quite overconfident – he even once attacked Spider-Man and the Foreigner single-handedly while telling his minions to remain in reserve.

“Quiet ! I would have let you live, you simpering boor. Now you and the Foreigner will both die… at the hands of Dead Aim !”

“Do you feel it, fool ? Your bones cracking, your organs pulping… crushed by the augmented might of Dead Aim ! Where’s your babble now ?”

Go ahead – he’s so obscure…

Drawbacks:
MIA to overconfidence and bragging.

Equipment:
VISOR [BODY 05, Bonus : This visor is coated in non-stick material, making it immune to Spider-Man’s webbing. This is presumably the same stuff that was used by Hammer’s technicians for the Rhino suit]. 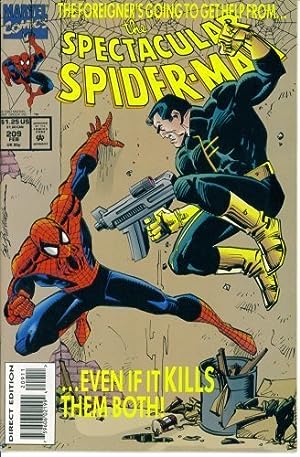