Dean Malenko is known as “The Man of a Thousand Holds”. He is a superb martial artist.

One would be hard pressed to find a submission/limb grappling move which he does not know how to both perform and counter. He rarely uses strikes aside from Flailing attacks and dropkicks.

Malenko can reduce the temperature of his body to sub-zero. Contact with his skin then causes damage to living tissue. He frequently makes use of this by putting an opponent in a limb-crippling submission hold while engaging his Frostbite Power. Soon, most opponents will no longer capable of fighting back.

Dean Malenko is the son of a martial arts teacher and ex-soldier, Professor Boris Malenko. The Professor moved his family to Florida trained his sons Dean and Joe in numerous grappling-oriented fighting styles. By his 20s, Dean was better than his father had ever been.

While Joe entered athletic competition, Dean went to work as a bodyguard. His mutant ability to reduce his body temperature to super-freezing temperatures developed shortly after he moved from Florida to Japan to study fighting styles there.

Malenko split his time between Tōkyō and St. Petersburg, Florida. He alternated between bodyguarding for Japanese celebrities (and Yakuza bosses), learning new techniques, and teaching at his father’s school in the U.S.

In the early 90s, he became friends with Chris Benoit and Eddy “Black Tiger II” Guerrero. They worked for anyone willing to hire them for a brief time. But family obligations took Guerrero back to North America.

Benoit and Malenko moved to the U.S., where they teamed with “The Franchise” Shane Douglas and formed “Triple Threat”. When that group disbanded, Benoit joined the Horsemen while Malenko retired to teach at his father’s academy.

The opening in the Horsemen left by Curt Hennig’s betrayal coincided with the death of Malenko’s father. Malenko jumped at the chance to join the Horsemen offered by Benoit, Anderson, and Flair. He turned the school over to his brother, Joe, and met up with the Horsemen immediately.

Malenko is short, with clean cut black hair. He dresses in trunks and boots when fighting to allow him to make maximum skin contact when using his Frostbite power.

Malenko received his “Iceman” nickname before he developed his mutant ability. He shows no emotion when in combat.

He is friendly and has an intelligent and witty sense of humor when not in a fight. 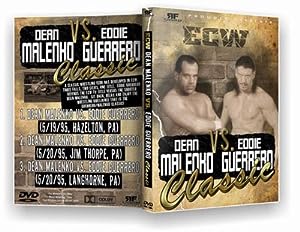