Death-Adder first appeared in 1980. He was part of a cool-looking serpent-themed hit squad, seen in a memorable storyline.

But though he seemed neat (kinda like a silent snakey underwater Wolverine), he had but few appearances. For decades, most of the information about him was in small Marvel Handbook entries, rather than primary sources.

This profile is best read after our Serpent Squad article, which has useful context. The profile for the Serpent Society is also helpful.

Death Adder had extensive surgical and biological engineering modifications. These include : 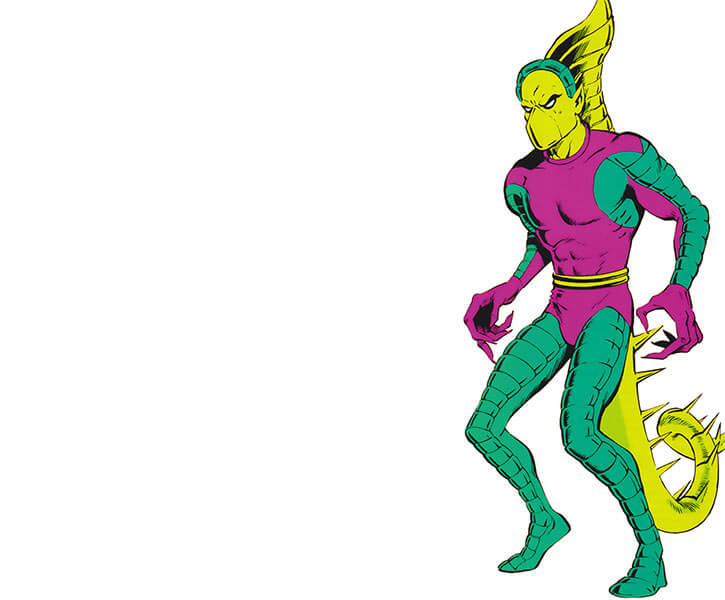 He seems to be an efficient athlete and hand-to-hand fighter. But not an extraordinary one.

He also was trained to fly “Serpent Saucers” – the Serpent Society’s equivalent of Quinjets.

Notes in the back of a Punisher book describe him as a competent and dedicated assassin, and particularly stealthy.

Other secondary sources  state that he has an unspecified engineering degree. They also mention that his abilities as a killer were important in establishing the Serpent Society as reliable contractors during its early months. 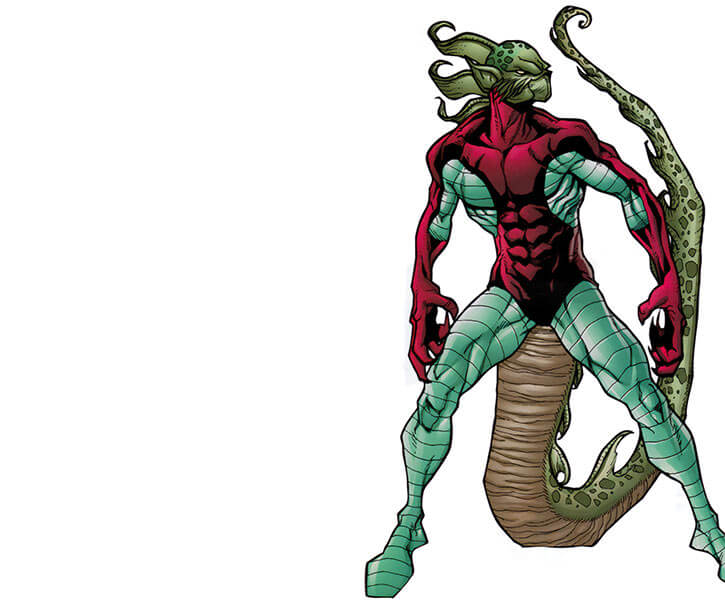 After his Dormammu-empowered resurrection, Death Adder might have some new, demonic powers. Nothing was clearly demonstrated, though.

His wounds did not appear too interested in bleeding, and he seemed to ignore what blood loss occurred. But it’s not clear at all.

Still, I wouldn’t be surprised if he gained regenerative powers – specialising in lethal damage and organ regrowth rather than blunt trauma. That’s what happened with Lascivious (Davida DeVito), after all. And he does seem to regenerate an eye at one point.

He was missing the poison from his claws and tail. But that was but one of the many cheats in this story to allow the Punisher (Frank Castle) to win against Death Adder and his colleagues.

Likewise, his bones were described as hollow so Castle could break them. In actuality, they are porous – but reinforced to endure undersea pressure.

Roland Burroughs was enhanced by the Special Operations branch of Roxxon Oil to become a special agent.

Secondary sources state that he was a Roxxon engineer, and selected among a number of volunteers.

He saw action along with the third Serpent Squad, including the mission to recover the dread Serpent Crown.

After a failed clash against Iron Man (Tony Stark), he and other Squad members became founding members of the Serpent Society. It seems that he was a key asset early on, being deadlier and more professional than most.

The Serpent Society established itself by fulfilling an A.I.M. contract to kill M.O.D.O.K.. Death Adder clawed at MODOK’s face and throat, fatally poisoning him.

During this job, Princess Python (Zelda Dubois) proved unreliable. Society leader Sidewinder (Seth Voelker) tortured her, then ransomed her off to her Circus of Crime comrades.

Once they agreed to pay, Death Adder was tasked with the delivery. However, he was slain en route by a Scourge of the Underworld.

The Society attempted to avenge Burroughs, but couldn’t determine who had killed him. 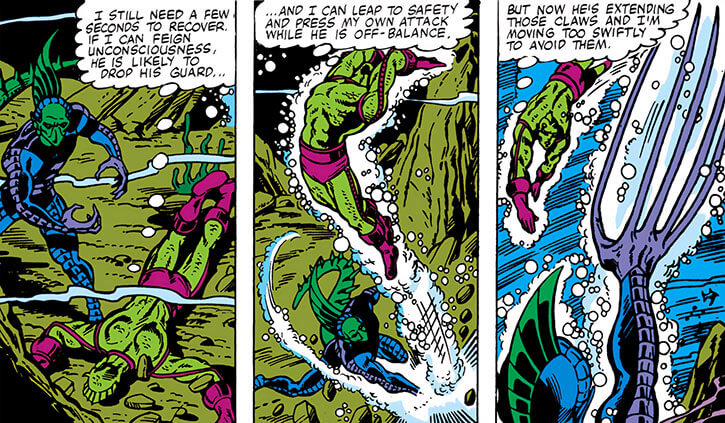 Death Adder was part of the 1986 Legion of the Unliving, conjured by the Grandmaster.

However, Legion members are not believed to be the actual spirits of the deceased. There are just too many cases where someone was a Legionnaire, but was later revealed not to have died in the first place.

In 2006, the Serpent Society recruited a new Death Adder (Theodore Scott). He had the same costume and similar enhancements.

In 2009, Roland Burroughs was among the Scourge victims resurrected by the Hood (Parker Robbins). Robbins used Dormammu dark magic to do that.

He then ordered them to go after the Punisher (Frank Castle). He falsely told his undead cannon fodder that Castle had actually been the Scourge.

Death Adder and Basilisk (Basil Elks) almost immediately splintered away from the rest. This may mean that they knew each other from before their death.

The pair considered that they didn’t need the others – which isn’t wrong.

They invaded the home of retired S.H.I.E.L.D. officer G.W. Bridge, and tortured his wife and stepson to force him to contact Castle. Bridge was a known, recent Castle associate.

The brutal clash ended up with Bridge and his wife dead, and the Punisher captured. Burroughs seemingly lost an eye to Bridge, but showed no sign of disability later on. 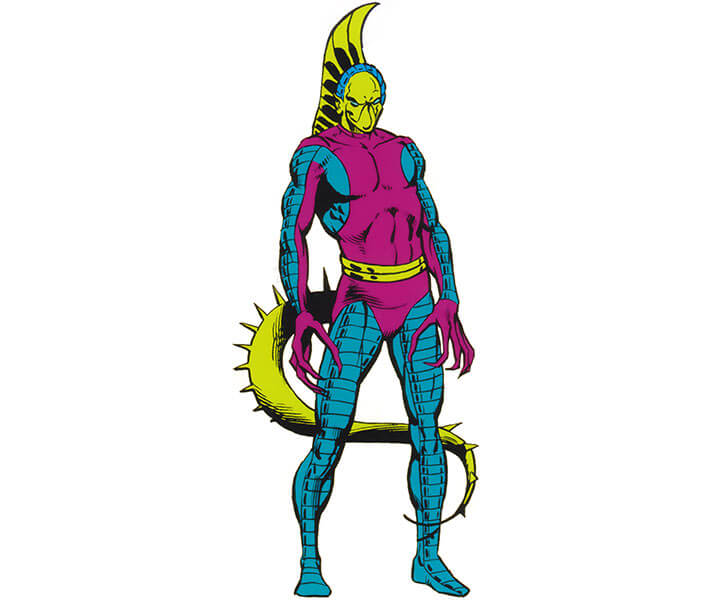 Both Death Adder and Basilisk joined the Hood’s mob as senior enforcers.

But in 2010, the bulk of the gang was defeated, and the Hood arrested, during their siege of Asgard on Earth. Death Adder and Basilisk weren’t seen during this battle, so they likely got away in time.

A remark by Mirage (Desmond Charne) implies that he and Death Adder worked for the Owl in 2011 or 2012. But that wasn’t directly seen.

In 2012, Death-Adder became a senior enforcer for Crime-Master (Bennett Brant), along with fellow resurrectees Megatak (Gregory Nettles) and the Fly (Richard Deacon). Rounding up the crew was Jack O’Lantern VI. They defeated Agent Venom (“Flash” Thompson) as he tried to assassinate Crime-Master.

Crime-Master then turned Eddie Brock into Toxin, and named his enforcers crew the Savage Six.

During the vendetta between Crime-Master and Thompson, Death Adder laid a solo ambush. He initially had the upper hand against Agent Venom, but his poison didn’t work thoroughly enough.

To save a neighbour’s life, Thompson was forced to break Burroughs’ neck.

But if the hypothesis that he now has regenerative powers is correct, that might only slow Death Adder down.

Death Adder’s costume is of a dark blue-green. Plus purple trunks, chest and gloves.

His mask, backsail and tail are encased in light green armor. The armor on his tail has spikes on it. Sometimes there are armour plates on the limbs, but they’re never seen protecting him from anything.

He seems to always be in costume. I suspect that donning or doffing it is a whole process. 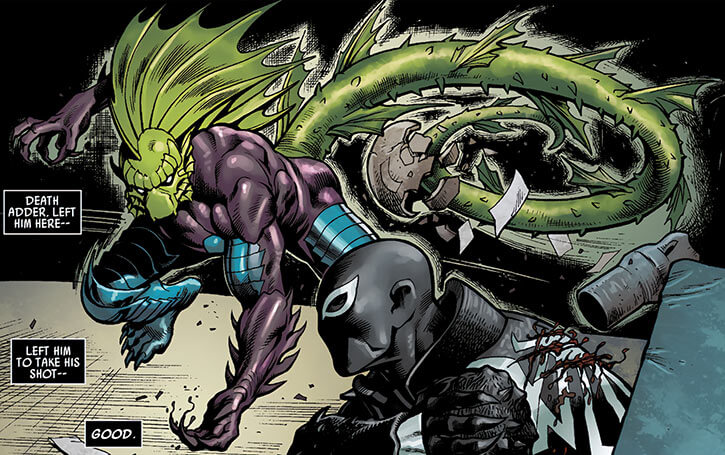 Death Adder seemed to be — fittingly — a cold-blooded killer. There was a casually murderous, cruel cast to his actions.

He seemed to be a disciplined team player, perhaps with a military background.

If he needs to communicate something specific — say, when he recruited Princess Python — he’ll write a little card ahead of time. My faint impression was that it was the same material as those slates you use to write underwater.

As to remote communication, he’ll use Morse code.

Both Black Mamba and Princess Python seemed to like him. Maybe he’s got good manners. Anaconda also was a good friend. Generally, he was respected by the other Serpents for his deadly professionalism.

Skin armour only vs. attacks at the eyes (such as a spray of mace).

One AP of Regeneration is possible even back during the 1980s. Cap is surprised by how quickly Death Adder recovers.

But that’s flimsy. His good BODY and decent Hero Points are sufficient to explain what happened.

Later on, I suspect Regeneration: 05 (though he can only engage 2 APs against Bashing Combat damage), and some APs of Invulnerability that can make a roll every 20 minutes or so. But this is too tentative to add to his stats. 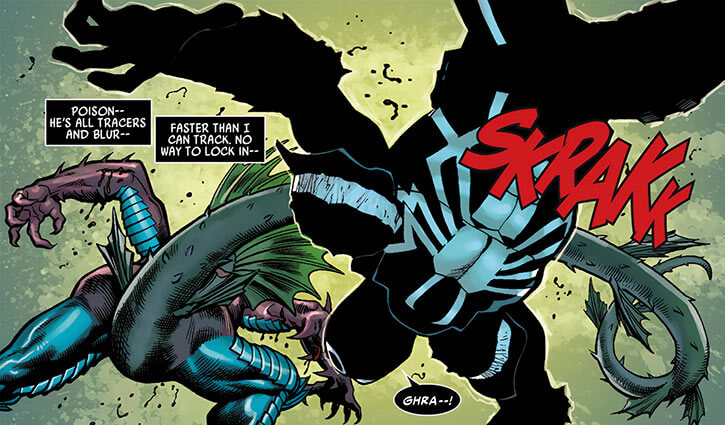 My pain, your thrill

The APs of Poison Touch take into account that it was somehow far easier to die when fighting against the Grandmaster’s Legion of the Unliving. In a “normal” story, Tigra likely would have narrowly survived.

We don’t have stats for Flash as Agent Venom. And I don’t have that much of a sense of his abilities, not being a Remender fan. But even if we did, that fight was mostly about Flash struggling to get the poison out of his symbiotic system, to regain his sight and DEX.

I didn’t model the paralytic effect of the poison. My sense is that Tigra was paralysed because she had just been reduced to 0 APs of Current BODY Condition, then died as she went into the negatives.

Should the CLAWS and POISON INJECTORS be Combined ? That would make sense. But the flow of his fight gave me a loose sense that some claw strikes were EV, and some were poison.

Having them Combined would make him deadlier than he is in the material, and we already have a Combined effect on the toxins. Three effects on a single Dice Action would be a bit much.

The original — like, 1990s — version of this profile used his Advanced Marvel Super-Heroes Role-Playing Game stats. There was too little material otherwise, so heh might as well align with those.

As it turns out, these were mostly workable. Except for his claws’ damage rating being too enthusiastic.

The stats for the BODY ARMOUR are nigh-arbitrary, there just isn’t enough material. It’s almost more about what it doesn’t do.

He could conceivably have APs of Gadgetry (realistic rules) and some military Skills.