Death Doll seems to be super-strong. This presumably was her main power as Liberty Lass.

After “the accident”, the CIA replaced her destroyed dermis with plastic-looking skin. This artificial skin can absorb tremendous impacts, even from a 200-ft fall. Death Doll doesn’t feel any pain when she’s hit.

How the skin disperses the absorbed energy is unrevealed. Perhaps it’s an extradimensional  shunt derived from alien or otherdimensional technology.

Death Doll was also a successful and experienced heroic crime fighter. Furthermore, she conducted numerous black ops for the CIA. She is quite skilled with a wide variety of weapons, and often packs a lot of offensive hardware.

Her most useful piece of equipment is a teleportation unit of unknown origin.

Death Doll was formerly the heroic Liberty Lass, apparently a superstrong patriotic type. While she was married to her crime-fighting partner, Mister America II, they did not know each other’s secret identity, a fact the press just loved.

Mister America and Liberty Lass moved to the city of Vanity, in Oregon, to fight crime. In this desperate city, the two strong and positive heroes gave a little hope to the population for a while.

But such a situation cannot last for long in this cursed place. What happened is unclear. Though it was high profile, people just refer to it as “the accident” without any explanation. Both Mister America and Liberty Lass apparently suffered horrible physical and psychological damage.

Liberty Lass had to be surgically reconstructed by the CIA using artificial plastic skin, and eventually became Death Doll, a jackal for the Agency. Mister America, apparently estranged from his wife, went on to become the murderous vigilante Bloodtype.

As a CIA agent, Death Doll was often a contact for super-villains wanting to conduct some black bag job for the Agency. This apparently was a common policy in the 1980s and early 1990s. Perhaps that surfaced in the wake of Amanda Waller’s Suicide Squad.

However, these missions became much less common when the Clinton administration took power. Death Doll continued to act as an assassin and enforcer, but no longer had contracts to offer to other super-villains.

Although Death Doll remained estranged from Bloodtype, she learned in 1996 that he had just been killed in an explosion. At that point the hero Aztek was thought to be responsible. While she professed to be unaffected by the demise of her former husband, she was actually distraught and angry. Death Doll thus decided to murder Aztek.

Working with her contact Fixit, a gadgets man equipping many super-villains, she tracked Aztek down and engaged him with brand-new weapons.

Not only did Aztek proved more competent and powerful than anticipated, but one of the goons assisting Death Doll turned against her. Tired of working for the vicious, despicable Death Doll and impressed by a recent act of generosity from Aztek, the henchman damaged Death Doll’s teleportation unit.

Aztek then trapped the former Liberty Lass in a steel net, from which she tried to teleport with her damaged unit. Death Doll accidentally reappeared but a few feet away, the defective teleportation leaving her apparently fatally embedded into a statue over Bloodtype’s gravestone.

Death Doll was seen later during the invasion of New York City by an army of female super-villains led by Circe. It is likely that the extraordinary protective abilities of her artificial skin allowed her to survive her Death Stalker-like accident.

She presumably remains active as an international mercenary.

As Liberty Lass, she wore a toga and a spiked crown strongly reminiscent of the Statue of Liberty.

As Death Doll, she smokes a lot.

Death Doll is a sociopathic killer. She is long past caring about anything. She’ll routinely hurt (physically, emotionally, financially) anybody she deals with – as long as it is feasible, as long as she can be bothered and as long as there is even the shadow of a pretext.

Being a cinematic sociopath she is smart, competent and very aggressive.

She fights without honour or humanity. Death Doll will use all sorts of tricks, traps, ambushes and low blows. She’ll often prepare the battlefield with allies charged with activating hidden weapons, such as searchlights to blind her opponent.

“You know what this is on my wrist ? It’s a teleporter. I’ll be out of here and back again with twice as much hardware before you can blink.”

(Threatening her mercenaries) “Now, do what you were paid to do or you’re dead !”

Bonuses and Limitations:
Skin armour may also be effective against energy attacks. This is likely, but not demonstrated.

She may have other assassin-type skills (such as Thief (Stealth, Security Systems)) but those were not actually demonstrated. 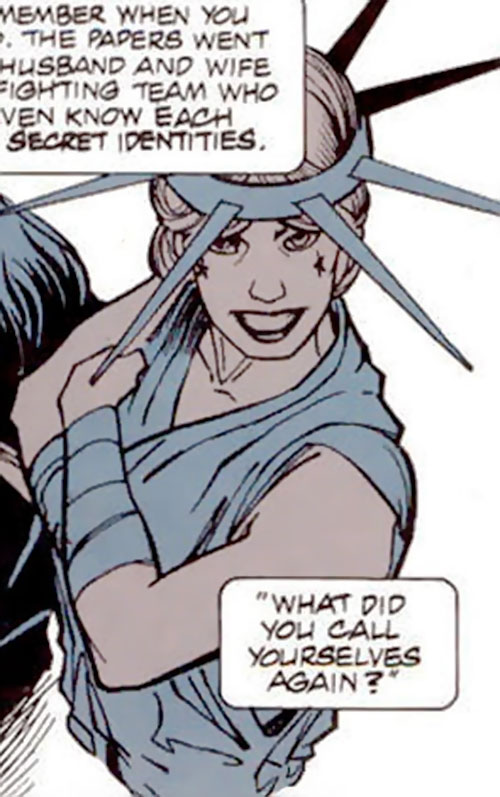