Batman #180 is the first comic book Mark Waid read, and it made him a lifelong fan of the genre. Since over the decades Waid has produced much fan-favourite super-hero stuff, let’s have a Death-Man writeup.

Was Death-Man that cool and inspirational ? Well, keep in mind that Mr. Waid was aged 3.

While this profile was being written, Death-Man made his surprising return under Grant Morrison’s pen. What were the odds ? It had been 35 years !

The Morrisonian evolution of the character is covered in another profile, since his character sheet is different.

Death-Man is just a guy with a gun.

For game stats purposes, I *assumed* that he’s okay at athletics and fighting. But that is not demonstrated in the primary material – since his main trick is to die. 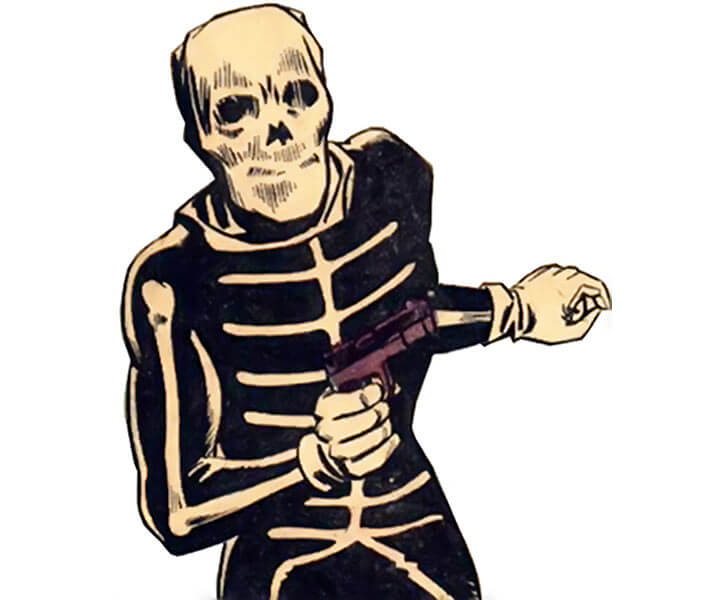 Death-Man mastered a yogic technique instantly plunging him into a profound catalepsy. Barring a sceptical, skilled medical examination this is indistinguishable from death.

He heavily banks on this. Back then, people suddenly dropping dead were not autopsied but simply declared dead and buried. Or at least, that’s how it worked in comic books.

His gang would then unearth him days later, and break his trance.

(At this point, yogis were seen in the West much like fakirs. As weird carnie-like mystics who do inexplicable tricks such as walking on fire and laying on beds of nails. Actual understanding of yoga (or of Sufi Islam, for that matter) and its aims was a tiny niche).

Death-Man is confident that this trick allows him to escape the law at will. This confidence combines with his manic, almost hysterical intensity to give him an overwhelming presence.

Even Batman was impressed by Death-Man’s confidence and had nightmares about him. Though admittedly it was the 1960s Batman.

Death-Man usually operates with a crew of six costumed gunsels. After he “resurrects” himself, he’ll hire a new crew. Since the previous one will presumably still be in prison.

He and his crew drive around in a large, black hearse. It resembled a late 1930s Packard hearse like this one  . If you want a Death-Man that feels more 1960s, you could go with a the 1960 Cadillac Eureka V8 hearse  .

Death-Man’s confidence and manic intensity bolster his mercenaries. They share the recklessness and blood thirst of their boss… but not his means to escape punishment. 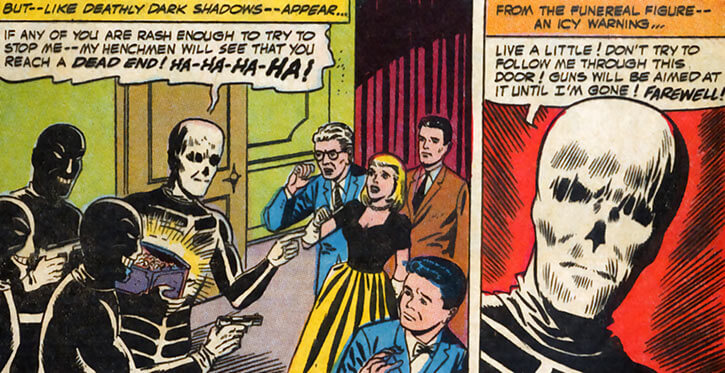 In 1966, Death-Man had a series of clashes with Batman.

Whenever Batman arrested him, Death-Man willed himself to “die”. This left little recourse to the law but to bury the “corpse”.

But Death-Man kept mysteriously coming back. This gave literal nightmares to Batman. And arresting him was of course pointless.

Bruce Wayne then saw a yogi demonstrating a similar technique. He and Robin rushed to the graveyard to examine the seeming corpse of Death-Man, but fell into an ambush.

This clash went poorly for the Dynamic Duo, and Batman was wounded.

However, at the last moment, a lightning bolt struck the gun Death-Man was holding. It electrocuted him as if he’d been sitting on an electric chair.

There are two mentions during the 2010s of Batman and Robin having fought Death-Man. So we know that even in recent-ish versions of the DC continuity, roughly similar events happened early during Batman’s career.

A late 2020 recap sequence shows Death-Man, in his 1960s costume, towering over Batman like a nightmare. This suggests that the encounter was horror-themed, as in the vintage story.

Perhaps the Death-Man encounter occurred while Batman was still fighting off a dose of the Scarecrow (Johnathan Crane)’s fear toxin.

Death-Man made a brief appearance in 2010. He had a more modern, tacticool-ish costume and was armed with an assault rifle.

Death-Man had broken into some sort of bank, killing two guards and stealing $3M in gold. No accomplices were visible, and the circumstances suggest that he used movie-heist-type skills. Perhaps security systems expertise, but there’s zero direct data.

Both he and Batman referenced their previous encounters. However :

Our No-Prize HypothesisA made-up explanation to plug a plot hole. is that the 2010 Death-Man actually was one of his old henchmen. He spent years (or decades, in non-sliding time  ) to master this trick and take over the Death-Man identity. But he panicked when confronted by Batman, despite talking a big game.

This hypothesis exists in part because the encounter was written as an unchallenging, throwaway random thing. Which was a stark contrast with the 1966 mystique. Super-villain decayWhen villains gradually become less credible threats., oh !

Death-Man had a morbid motif and liked delivering obviously rehearsed (oh oh oh) lines. Alternating between the corny, dated puns and the morbidly poetic statements made for strange dialogue.

“If any of you are rash enough to try to stop me — my henchmen will see that you reach a dead end ! Ha ha ha ha !”

“Ha ha ha ! Do you really think you’ve captured me ? You’ve nothing but the black shadow of death in your hands ! I can drift right between your fingers like smoke — anytime I wish !”

(As a judge sentences him to death) “Ha ha ha ! Do you really think you have the power to sentence me to death ? I — and I alone possess the power over life and death ! I am beyond your feeble laws ! You can no more jail a shadow — or punish it – than m-m-m-…” (makes himself seemingly die) 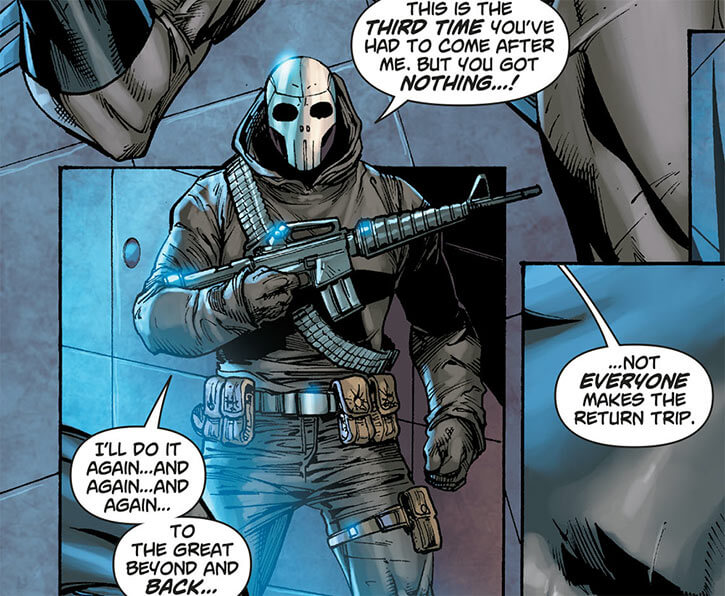 The 2010s look is kinda like a discount Crossbones.

Strange Appearance (his uniform is grafted onto him and cannot be removed).

In the death car

The gunsels have standard connected thug stats, and a .45 plus two clips like their boss.

Their intensity could be modelled as an extra 10 Hero Points whenever they work with Death-Man. I suppose it could be a thing where he has Leadership and way more HPs, but restrictions about using these, etc.. Let’s just go with “thugs have 10 extra HPs” for simplicity’s sake.

In his 2010 appearance, I had the impression that he now had Lightning Reflexes. But it’s poorly substantiated. 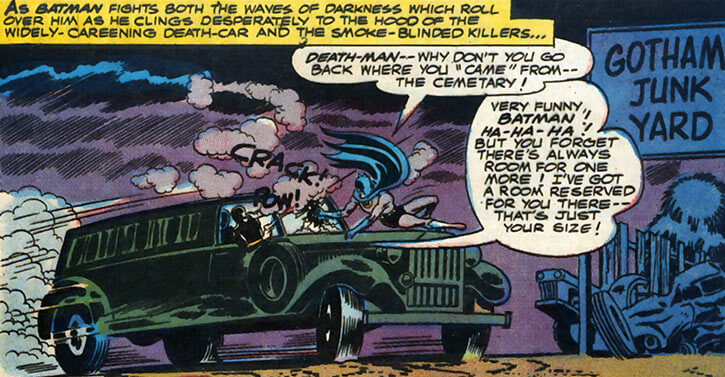