Death-Stalker lives in another dimension  close to Earth. There, he is intangible and invisible. By force of will, he can appear in the Earth dimension – either as an intangible projection, or as a fully solid man. In DC Heroes RPG terms, this is all Spirit Travel.

When fully in his otherdimensional realm, he can move more quickly than he could on Earth. This gives the impression of teleportation (Spirit travel). He uses his formidable mobility to stalk his foes. Death-Stalker will melt away and ominously reappear a short distance from his opponents, no matter how hard one tries to lose him.

However, the T-radiations in his body prevent him from staying on Earth (tangibly or intangibly) more than a few hours at a time. This time limit has an odd habit of coming up when he seemingly gets destroyed. Say, plunged in molten metal, engulfed in hellfire or thrown at a suit of alien armour with point defense weapons.

If an opponent hits Death-Stalker while he is intangible, the attacker will experience a soul-numbing cold. It is awful enough to have a normal person pass out from shock.

Death-Stalker also exudes a supernatural, terrible aura. Even the Man Without Fear looked like a deer in headlights when he first met Death-Stalker (Charisma (intimidation)). He also is supernaturally strong, and roughly on par with Daredevil in hand-to-hand combat.

Death-Stalker is further armed with a pair of white gloves. These can become highly charged with energy, giving him a lethal touch. This energy has been described as microwaves, but seems to have the properties of both lightning and extreme cold.

More details on the Stalker’s power

Further expanations, since the Power usage was not clear enough for people unfamiliar with the character :

When the Exterminator was bathed in incredibly intense T-radiations, he was both mutated and projected into the T-Stream, seemingly forever. However, in time, he learned to adapt to his new state, and even to manifest in the real world. He would flicker in and out of existence and/or visibility with great facility.

Even more insane than before, he fashioned the chilling, terrifying identity and costume of the Death-Stalker. It became complete after a stole an experimental weapon from AIM. These were gloves that could emit lethal radiation, giving him a death touch.

Death-Stalker came back with the intend of both becoming a formidable crime lord ruling by fear, and taking his revenge on Daredevil. His insanity, however, made things a bit haphazard. In particular, he convinced himself that he was running a Fu Manchu-level empire no matter what his actual influence was. 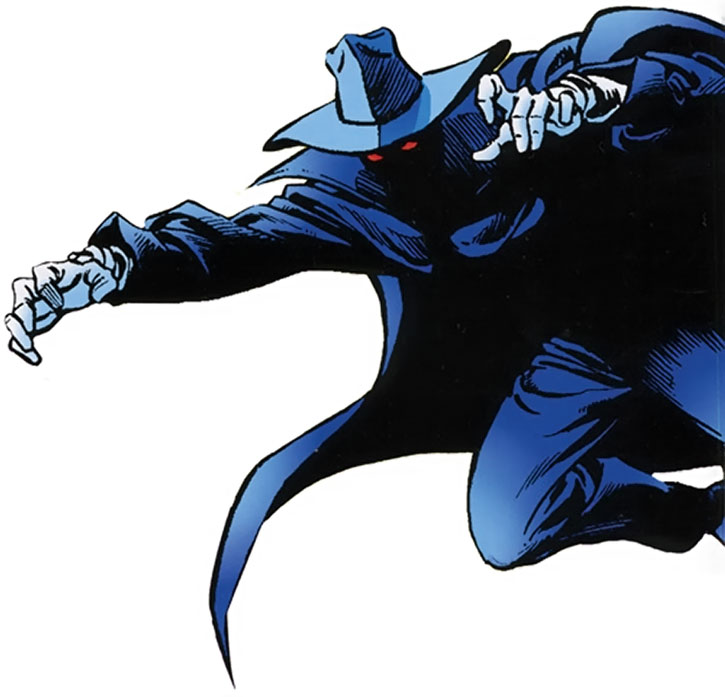 When Death-Stalker first encountered Daredevil, he and his enforcer, the Gladiator (Melvin Potter), were after Candace Nelson, Foggy Nelson’s sister. Ms. Nelson had uncovered documents about Project : SULFUR, a failed attempt at replicating the Super-Soldier serum from Project : REBIRTH.

Though SULFUR has been a failure and only succeeded in creating the Man-Thing, the research documents themselves were quite valuable.

Death-Stalker and the Gladiator clashed with Daredevil and the Man-Thing in the Everglades. Then, Death-Stalker went to New York and took the Nelson siblings hostage so Daredevil would fight him. But the villain was so surprised when Daredevil swept his legs from under him that he fell to his seeming doom in a vat of molten metal, along with the Project : SULFUR documents.

Night of the Stalker

When Death-Stalker was seen next, he had somehow learned about a series of special crystal lenses crafted a long time ago by the Atlantean wizard C’thunda. Death-Stalker tore through several New York City museum to recover them, then assembled a potent laser gun using the lenses.

Death-Stalker had, of course, merely been shunted back to the T-stream, and later re-emerged to threaten Daredevil.

This time, his plan involved kidnapping Karen Page, an actress. Page was also the former secretary of Nelson & Murdock and the former lover of Matt Murdock aka Daredevil. Death-Stalker was more specifically after notes left behind by Paxton Page, Karen’s father, the mad scientist known as the first Death’s Head.

Death-Stalker used an elaborate charade. He disguised himself as Death’s Head I, retaining the services of Smasher IV, hypnotizing the Stunt-Master to kidnap Karen Page, etc.. However, this led to the intervention of both Daredevil and the Ghost Rider, and Death-Stalker had to retreat after being hit with a huge blast of hellfire.

Daredevil later stumbled upon a meeting of criminals. They were assembled to hear Death-Stalker’s alliance offer. During the fray, one of the criminals fell on Death-Stalker’s hand and was killed, prompting the others to flee. Death-Stalker first attempted to kill Daredevil, then abruptly decided to leave.

The reason he chose to leave may simply have been to shadow DD to learn his secret identity. In any case, by his next appearance a few days later, he knew Matt Murdock was Daredevil. Death-Stalker started stalking Murdock and nearly killed him in an hospital room. However, the arrival of the Black Widow and the Avengers saved the hero.

Death-Stalker then retained the services of a new trio of Ani-Men (cat, ape and bird) to capture Matt Murdock. The Black Widow was present but, as she was wearing a heavy dress restricting her movements, she could only bring Bird-Man down before the other two absconded with Matt Murdock.

Daredevil and Death-Stalker fought, and Daredevil smashed a nearby streetlight. As they fought in pitch darkness, the raging Death-Stalker accidentally rematerizalized with a part of his body inside a tombstone, and was instantly killed.

Years later, his mother attempted to avenge him with the help of killer robots in the shape of little girls, but died before she could complete her vengeance. A minor villain called Death Ringer also gained Death-Stalker-like abilities for a time.

Death-Stalker deliberately cultivates his Distinct Appearance by acting spooky, speaking with an otherworldly voice and so on.

The lavender outfit is seen in his very first appearance, where he does not wear his better-known blue cloak and clothes. This costume lasted but one panel. In the next issue, it has mysteriously mutated into the classic Death-Stalker costume.

A very scary, evil, cruel crimelord/ghost and a casual killer. He has little problem with killing passerbies and henchmen, and in fact seems to enjoy it. He seems completely obsessed with his own image as a supernatural, demonic lord of evil, and will dramatically act like something out of an old horror movie.

This includes numerous, numerous death threats, as in the quotes. Sterling will also toy with his opponent so he can do his inexorable implacable nemesis of doom routine. All the while he’ll tell his opponent in a chilling voice how everything is useless and how he cannot be stopped.

At some points, he seemed more interested in making ominous threats and being involved in sinister machinations than in actually fighting or getting things done.

He likes putting heroes in death-traps, too.

Death-Stalker is rather unstable. He will sometimes change his plans in mid-flight for no readily discernible reason. He’s not always completely coherent, but will kill whoever remarks on this. His sheer scariness and raw presence mean he can still be quite competent at assembling large criminal forces, though.

There has been occasion when he raved about “sensing the presence of his foe” and the like, but he doesn’t actually have super-senses. It was just a combination of lucky coincidence, insanity and theatrical ranting.

He quickly became obsessed with killing Daredevil/Murdock as he came to resent his exile more and more over the months, and to hate the man responsible for it. He doesn’t seem able to focus on this, though, and on multiple occasions he let Daredevil live for no clear reason.

“When will you learn ? The Death-Stalker shows NO mercy to any potential foe ! KILL HIM !”

“You hesitate, monster. Why ? Can it be that you sense the power I hold ? That you know instinctively that my touch… is the touch of DEATH !”

“Now you’ve felt it, Daredevil, just as the monster did. My power…the power of death. I am death, Daredevil. Your death ! You will die today, man in red. Whether by my touch, or by the infection that surely has begun in your wound… or by some nameless menace that waits in the swamp. Do you understand ? You cannot escape. This is the day of your death. Think about it ? Can you feel it in your bones ?”

Could have been a good Batman villain. Or maybe the T-stream simply allows access to the DCU, and Death-Stalker spent a part of his career there.

Bonuses and Limitations:
Charisma is Contingent upon Spirit Travel.

Drawbacks:
Distinct Appearance, SPR (Cannot stay in Earth dimension more than five hours, and must rest for at least that much time before returning), SPI (Generally unstable and demented).

Death-Stalker has very fine control of the moment when he becomes tangible, and can quickly shift to intangibility. This makes him very hard to fight : striking him at the wrong time will have no result and leave the attacker wide open, and he can easily step through parries and blocks.

He can easily feint by attacking while intangible, thus leading his opponent to believe he is tangible – one can only be positive that he’s tangible when he lands a blow. This is all made considerably worse by the fact he needs a simple touch to kill most opponents.

Opponents thus have the same penalties as if fighting in complete darkness (+2CS to Death-Stalker’s OV) when they attempt close combat with Death-Stalker. Even Daredevil’s super-sense couldn’t reduce this penalty. 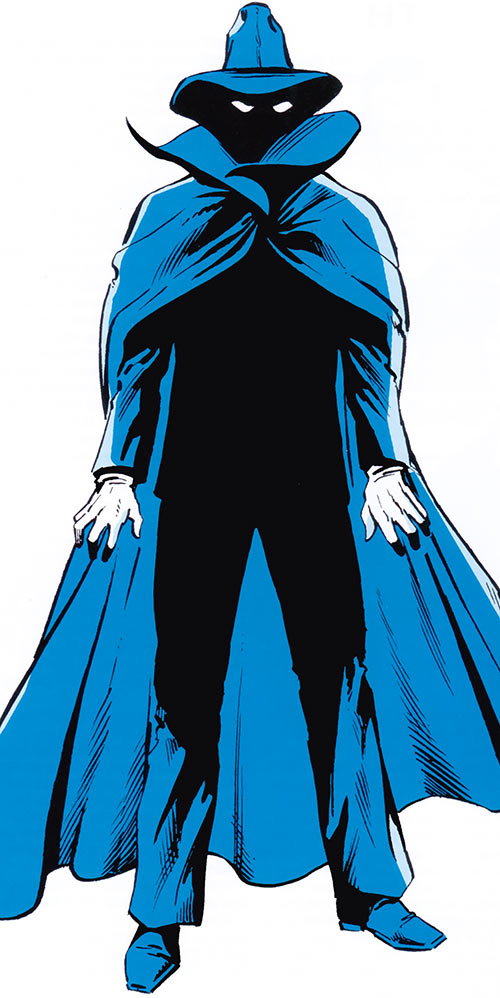 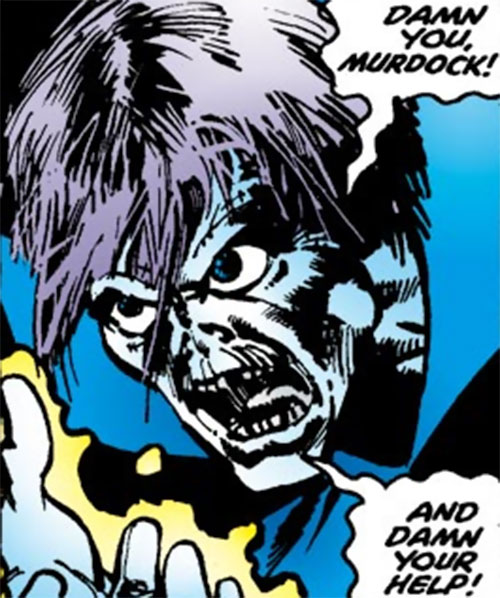 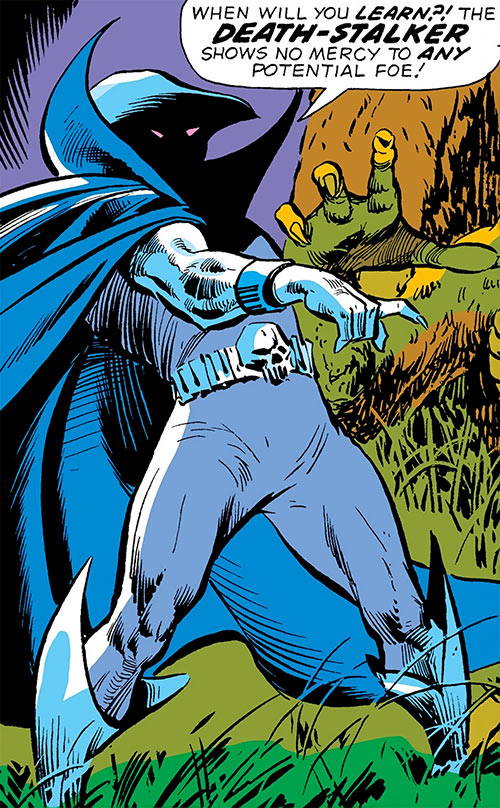