The Death-Throws (a pun on the phrase “death throes”) are a well-trained costumed, armed, criminal jugglers (!). The started appearing in 1983, and were seen as a team in 1986. They are primarily enemies of Hawkeye (Clint Barton).

They are a useful, if odd, gang of street-level opponents. That’s interesting for gamemasters.

Extent of operations:
Primarily the USA.

Relationship to conventional authorities :
The Death-Throws are wanted for a number of crimes that include terrorist activities.

Bases of operations:
Unrevealed if any.

Known allies:
Crossfire has been a recurrent employer despite having oft-troubled relations with the Death-Throws. 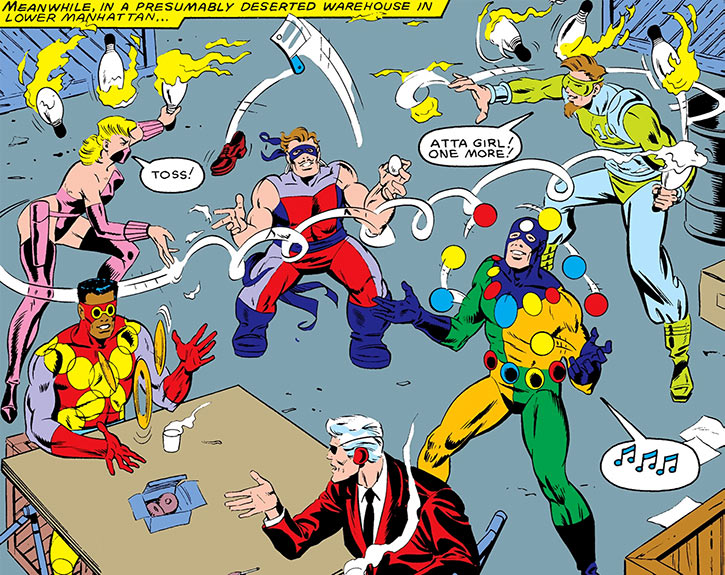 Number of reserve members:
None known.

Organizational structure:
The leader apparently acts as the representative and negotiator of the group and sets operations up. It is not uncommon for the Death-Throws to take small jobs only requiring a pair of operatives, or solo jobs.

Membership requirements:
All members are dangerous criminals and murderers who can demonstrate a superior level of juggling skill.

The Death-Throws sometimes employ tactical headset radios (in DCH [BODY 02, Radio communications: 05], in DCA Communication 2 (Radio)). These radios seem to be the type that will easily pick up a whisper, but greatly dim gunshots, explosions, screams and the like. Those are usually used by SWAT operators. 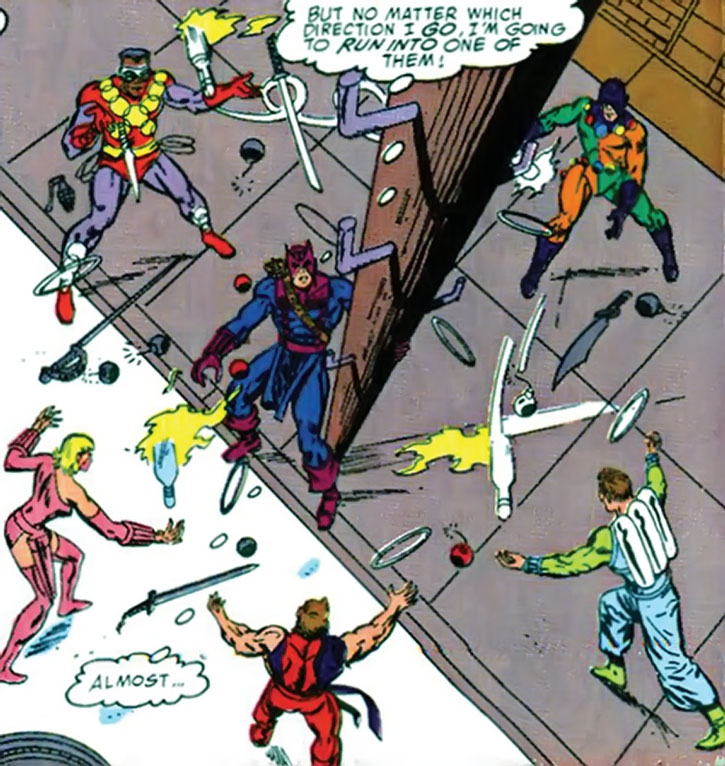 The Death-Throws occasionally surround a person and start juggling among themselves. They’ll rapidly pass dangerous objects — such as blades, torches, chainsaws and explosives — between them. This surrounds the person with a endless stream of deadly items flying perilously close by from all directions, pinning and intimidating them.

The Death-Throws date back to the early 1980s, and possibly earlier. However, they did not appear as a full team before 1986.

Their basic roster — Ringleader, Tenpin, Knick-Knack and Oddball — was expanded in the mid-1980s when Oddball’s friend, the demolitions expert Bombshell, discovered that she had a talent for juggling. Bombshell trained to meet the group’s recruitment standards.

The first documented mission of the full roster was to bust Crossfire free. This was done right as he was being taken to the tribunal under police guard and amidst a crowd of journalists and onlookers. In a hail of blunt projectiles, smoke and tear gas, the Death-Throws flawlessly struck, and grabbed their principal.

However they soon learned that he did not actually have their fee. The offbeat but dangerous mercenaries decided to ransom Crossfire off. They reasoned that Hawkeye and Mockingbird might be the most willing to pay to get him.

As it turned out, it was Hawkeye and Captain America (Steve Rogers) who came to get Crossfire, with no intention to pay. The Death-Throws managed a stiff resistance, chiefly thanks to Ringleader’s plans and preparations. They were eventually overcome. While Knick-Knack attempted to run away with Cap’s shield he was stopped by the arriving Mockingbird. 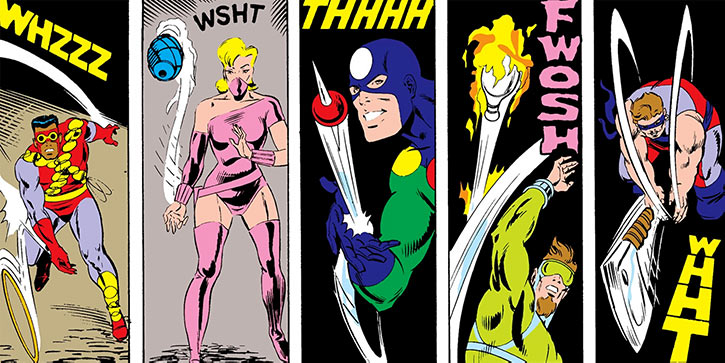 In 1989, the Death-Throws were hired by Crossfire to join large group of minor but colourful costumed criminals. This gang was promised a huge reward for Hawkeye’s bow arm.

On their first attempt, the Death-Throws landed some good hits against Hawkeye and wounded him. But they were way too confident and let him turn the tables against them. Hawkeye narrowly survived thanks to the timely help from Mockingbird and his old mentor Trickshot. Howbeit, Trickshot was severely wounded by a blade thrown by Knick-Knack.

During the 1990s the Death-Throws were not seen operating together, though individual members took solo jobs. One such outing led to the apparent death of Oddball – at the hand of Headhunter during a Madripoor blood sport fighting tournament.

Another man took the Oddball mantle, one Orville Bock. It is possible that another woman succeeded Bombshell as well, given differences in characterisation. But nothing about the latter was mentioned in primary or secondary sources.

In 2006 the full Death-Throws roster was recruited by the RAID organisation (Radically Advanced Ideas in Destruction) for a major terrorist attack on London. Many other minor villains were recruited for a show of force. It was indiscriminately aimed at the civilian population – they were paid by the corpse.

The Death-Throws operated along with Crossfire. They took over the Tower Bridge, killing and wounding dozens. They were boxed in by the Israeli operative Sabra, but managed to keep her at bay until Union Jack (Joseph Chapman) came to reinforce her.

Crossfire and the Death-Throws were hit hard to put an immediate end to the situation and rescue victims. It is possible that Crossfire drowned or escaped by swimming away under the Thames. 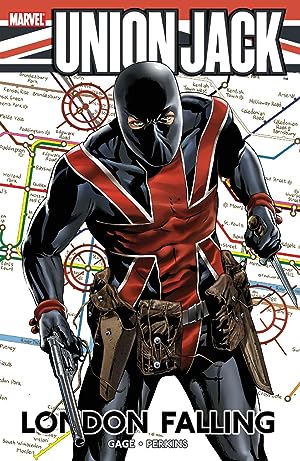