These notes are terribly old – late 1990s. Thus, by our modern standards, they are half-arsed. Nowadays, we thoroughly arse ’em. But it’s going to be a while before this one can be redone.

CDR Cray is a Specwar legend. He went through the Marines (probably Marines Recon), ROTC, BUD/S, SEAL Team 6 and last but certainly not least the uber-elite IO Team 7. He later did one-man highly sensitive SOC/DOD work. By himself, he’s as good as any entire team from SOC/DOD.

Deathblow is also a huge man in top physical condition, with an impressive musculature and lighting reflexes. His most impressive trait remains his extraordinary willpower.

The military was destined to be a way of life for Michael Cray before he was even born. His father was an admiral in the U.S. Navy. Still, he was in college, wanting to become an archaeologist, when his parents were killed by terrorists.

After this incident he decided to dedicate his life to stopping terrorists and eventually became a Navy SEAL. He was in the elite. Yet he went even higher, by joining the elite of the elite – SEAL Team 6, specialized in anti-terrorist endeavours.

There were still other, secret levels beyond this. Thus, Deathblow eventually graduated even further. He joined the crack Special Ops team of International Operations (I.O.), one of the shadiest and most powerful US intelligence agencies. He was part of the seventh incarnation of the force – Team Seven.

Possibly the toughest military badasses of the world, Team Seven conducted numerous successful and semi-successful missions. For psychological reasons each member of the team had a codename, as well as specific face paint motif. Thus did Cray become Deathblow.

Team Seven once was sent in a strange mission where all members were exposed to a powerful mutagen. The entire team emerged with alpha-class psionic  abilities. All except Cray. I.O.’s wickedly devious director, Miles Craven, then send them on a bogus mission to destroy a fictional stock of WMDs. He then had the US Navy fire a tac nuke at them.

The unpowered Cray had been left on the bench as dead weight. But he understood what happened, took control of the bridge of the ship which had performed the launch, and warned his unit. He did so in time for them to erect a collective force shield that allowed them to survive the blast.

Eventually, Slayton brokered a deal with Craven. I.O. would stop hounding the Team Seven vets and their progeny. In return he, former team leader Lynch, and Cray would work for them.

Lynch reached a position of authority. Although he personally despised Cray, Lynch was loyal toward all Team Seven vets. Thus, he successfully negotiated Cray’s release from prison. Lynch even convinced him to resume working for I.O..

Cray started operating in the brutal, vicious world of black ops as a top operative and hitman. He was a part of numerous death squads, and occasionally a one-man death squad. His weapons skills and tactical acumen were unmatched. But he was still, ultimately, an assassin and a weapon for a corrupt, above the law agenda.

His personal sense of justice often conflicted with his strong military mindset. All these wetwork and blackbag jobs weighted heavily on his conscience.

Cray then met a FBI agent named Gabrielle. She tried to talk him into leaving it all behind and fleeing I.O., to redeem himself. Cray wanted to, but ultimately Gabrielle lost. His loyalty was too strong, and the only thing he knew was how to be a soldier and killer.

Gabrielle left him, and was killed shortly after.Deathblow was devastated – and soon learned he was dying of a cancer.

Devil and the deep blood sea

He then quit IO. For a time they pursued him as a criminal, but I.O. dropped the charges since he was doomed anyway.

They were wrong. The cancer was in fact a side-effect of his slowly emerging superhuman capabilities, which he had acquired all those years ago along with Team Seven. They had simply not manifested until now. Thus, Cray slowly discovered he would not die. He also begun to realise that Gabrielle might have been some sort of angel, rather than a human being.

Shortly after this, Cray was caught in the holy war launched by a Devil incarnate, the Black Angel, against the mystic Order of the Cross. The Angel’s goal was to take possession of the Miracle Child, a young divinely-inspired prophet, and unleash the full power of Satan on Earth.

Deathblow’s main goal in this war was to drink from the Grail to heal his supposed cancer. But the seeds planted in his soul by Gabrielle were powerful. Thus, Cray managed to personally defeat the Black Angel with his sheer spiritual strength.

Deathblow then started working as a bodyguard for his friend Rayna Masters’ Executive Protection Services, and was involved in several fights inherited from his past in Team 7. He finally sacrificed himself as Earth’s last line of defense against Damocles, and was at last reunited with Gabrielle.

Mike Cray is a massive, muscular man, whose face tells of intensive combat experience. He wears his hair cropped short, of course.

His civilian dress is slightly paramilitary, but he can do with a suit. He often wears a red bandanna around his skull.

He also has a ritual makeup thing, which he adopted during Team 7, when each man had a sign around his eyes. Deathblow’s symbol is two vertical red lines from hairline to jaw, which go over his eyes.

Back in Team 7 and IO, Cray behaved as an attack dog. Hot-headed and prone to berserker rages, he was fanatically loyal to his team, and violence was his main mode of “communication”. He’d probably have been tagged as borderline psychopathic.

He was deeply hurt by the fact he didn’t have any power after his Gen-Factor exposure. Still, he was a top-notch professional soldier, almost infallible, and possessed of a dog-like loyalty toward the team.

When he bailed out of the military and IO, Mike was a thoroughly demolished man. He had been diagnosed with a cancer, and knew he would die fairly soon. He was also haunted by the numerous atrocities and countless kills he committed, often for no morally defensible reason. Furthermore, the woman he loved more than anything he ever loved had left him.

His life was but a drone of rain, blood, gunpowder and death without much of a reason.

The last year of his life was the story of a redemption. Gabrielle put him back on the right track, and he actually saved the world twice, once fighting the Devil itself. Mike was still a generally aimless, lost man, but he finally proved he was a truly decent, spiritually pure warrior.

“No. PULL OUT. Our intelligence incomplete. I botched the job.”

In the DCU, Cray would have died when he saved the world the first time, against the Dark Angel. The story, as told in the Deathblow TPB, would be mostly unchanged. However the Miracle Child would have been young Tim Hunter, whom one member of the Triumvirate attempted to possess.

He’d probably have fought at the side of John Constantine, which would have been a most interesting team up…

Drawbacks:
Guilt (Gabby’s death). For a time Cray believed he had a CPR (terminal cancer).

Those statistics are for Cray during most of his career, before he was diagnosed with a fatal cancer. The “cancer” was actually his powers, which he discovered when he was stabbed during a fight.

Shortly before his death, his powers exploded to their full potential – an estimated STR 18, BODY 16, Invulnerability: 18, Regeneration: 10. 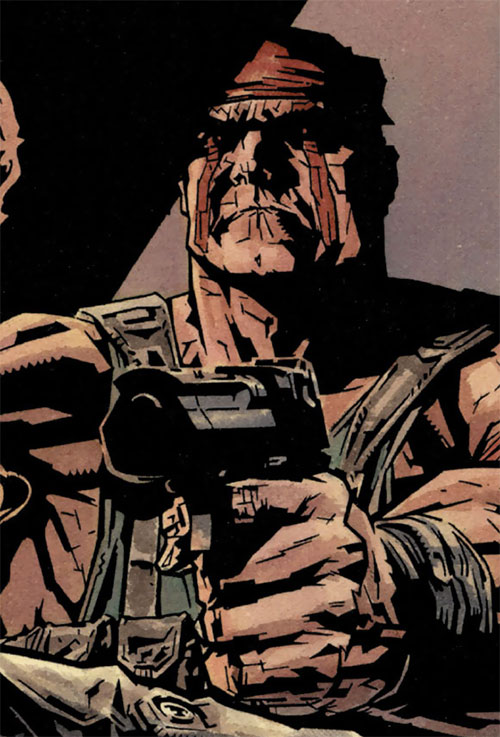 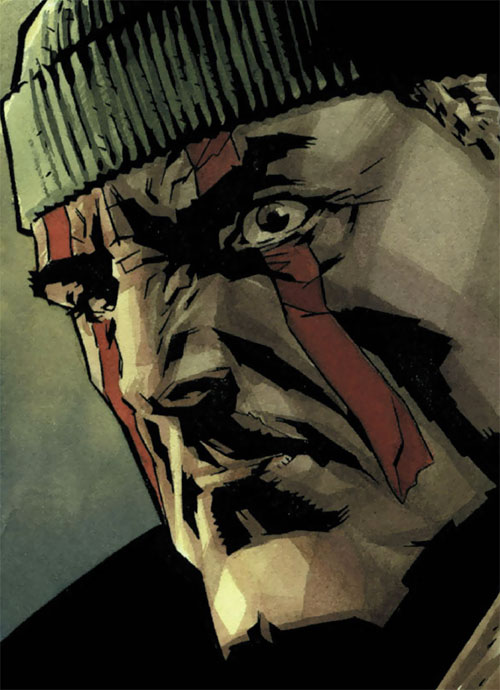 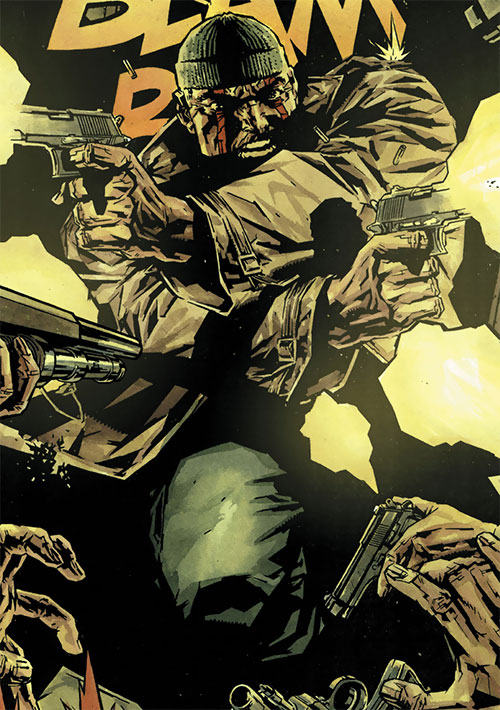 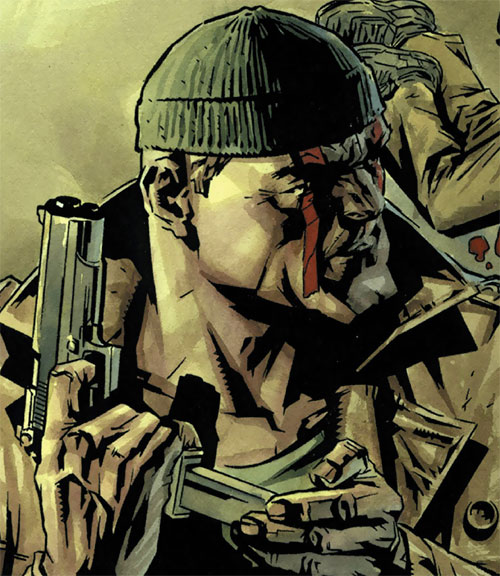 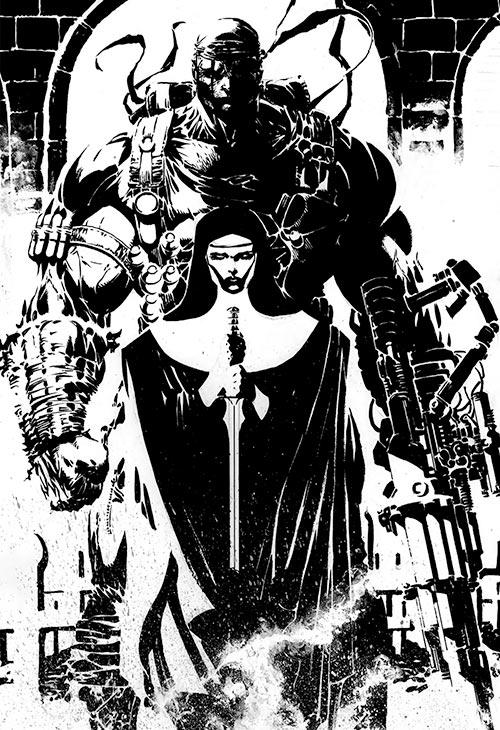 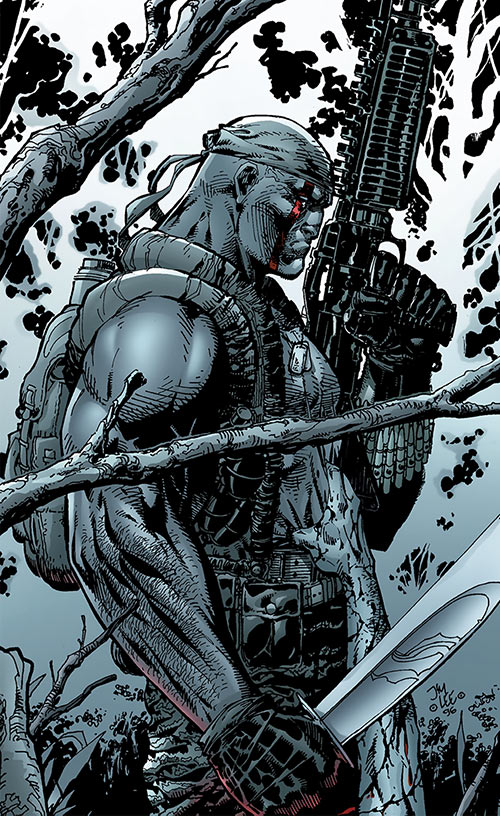