Deathclaws are among the most dangerous denizens of the wastelands. They are incredibly fast and ferocious, their hide can all but ignore most attacks including common firearms, and their huge claws can cleave a man in two.

They also have superior olfactory and auditory prowess.

Deathclaws are sapient  – though at the level of a child. Howbeit, there is no sign of this during the first Fallout game, though, where they just seem to be predating beasts. This retcon  is introduced in Fallout 2.

Whether deathclaws are cold-blooded is unknown.

A military force with pre-apocalyptic weaponry (such as plasma rifles) can dispose of deathclaws, provided they operate in a terrain that doesn’t facilitate ambushes, and/or have power armour.

An elite marksperson with powerful firearms and who can generally hit deathclaws in the eyes, such as the Vault Dweller, will also be able to deal with them. Any level of force short of that, or being surprised by deathclaws, will likely result in a massacre.

Estimating the size and weight from the in-game sprite is difficult, but a picture in the manual suggests that a fully-erect Deathclaw is about 2.4m (8’) tall.

Extrapolating from the weight of bears, and the fact that a deathclaw looks heavier than a bear (due to the much larger arms, for starters), a weight close a tonne (1,000 Kg, or 2,200 lbs) sounds reasonable.

Like with radscorpions and two-headed cattle, it is unclear how such massive creatures can sustain themselves in a barren milieu.

Demons of the wasteland

Deathclaws are the result of a wartime bio-engineering project. It mutated small reptiles (reportedly chameleons) using 1950s-style atomic horror radiation and the Forced Evolution Virus. The idea was to create non-human shock troops specialising in melee and capable of stalking and killing enemy soldiers.

It is possible that radscorpions were involved in this project, perhaps as a early direction that was abandoned when chameleons worked better.

Like radscorpions, one suspects that there was a small population that broke out when their Southern California research lab was destroyed during the War, and thrived during the ensuing decades as apex predators. 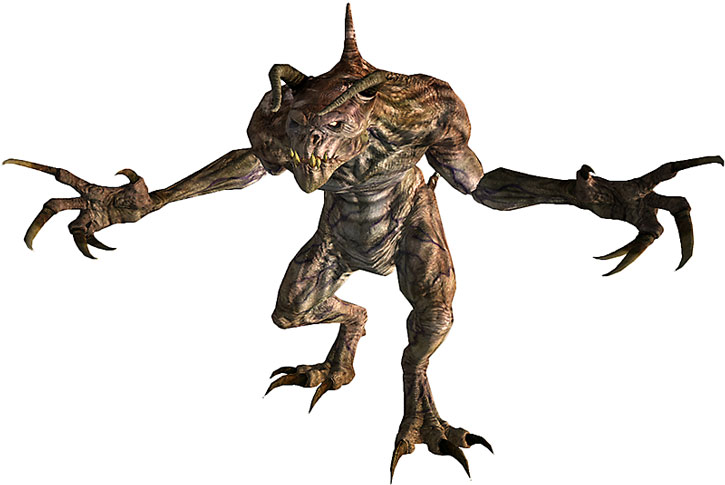 Deathclaws live in clans up to 20 individuals strong, the vast majority being male. One of the few females is the dominant – she’s the only one who gets to have sex with the males and thus lay eggs. The dominant female is usually larger than the rest of the clan, of either gender. How this works biologically is unknown.

Perhaps sexual activity releases a female growth hormone, or the presence of a dominant female inhibits the growth of other deathclaws.

Prior to the 2150s, there were few sightings of deathclaws by humans. Most such encounters were unlikely to leave human survivors. The testimonial of these survivors gave rise to a rumour about deathclaws being supernatural, demonic creatures with all sorts of paranormal powers. And yet, the descriptions of their lethality weren’t actually exaggerated.

Some even thought deathclaws were otherdimensional monsters who had crossed over to Earth when nuclear fire opened a gateway.

Circa 2160, a nest of deathclaws established itself in the Los Angeles Boneyard , close enough to human settlements to be verified as actual creatures and not myth. None of the Boneyard factions could do much against them, though – even the Gun Runners, who had the firepower, didn’t have the military know-how.

The large no-go zone around the deathclaw nest blocked a lot of commerce until 2161, when the Vault Dweller killed the whole clan there and its dominant female.

An herbalist in Vault 13 offers a lot of zoological data about the species, but there’s no reason to think he’s entirely accurate. His main points :

One of the mods (restoring cut content, I assume) also features lesser deathclaws, which can be found in a random cave system. These specimens have, in DC Heroes RPG terms, a BODY of 05, no Damage Capacity or Enhanced Initiative, INT and INF of 02, and an Initiative of 11.

A project run by the Enclave during the years that precede Fallout 2 also aims to uplift  deathclaws. Specimend with a good intelligence and vocalisation ability were picked, then worked upon to make them sapient and speech-capable.

The procedure was a complete success. In fact it made most specimens more sapient than planned (on the level of adult humans), and gave them a strong sense of ethics. The experimental batch strove to hide its intelligence from the experimenters, though at least one scientist discovered the truth.

The Enclave had uplifted these deathclaws for use as shock troops to spearhead dangerous operations. They were deployed in 2242 to storm Vault 13, kidnapping the entire population. The deathclaws were then left behind, presumably because there wasn’t enough room on the Enclave aircrafts to carry both the deathclaws and the prisoners.

The deathclaws came to live in Vault 13, using its vocal command computers and taking in stray humans. They had a well-running, benign society benefiting from Vault resources until a saboteur came. He crippled the computer, forcing the deathclaws to once again hunt for subsistence. The Chosen One would eventually fix the computer.

However, the Enclave discovered in the meanwhile that the deathclaws were too smart and would attempt not to serve their ethically condemnable goals. A strike led by Frank Horrigan exterminated the Vault 13 uplifted deathclaws. Though at least two survivors are known, it would seem that the uplift strain went extinct that day.

Deathclaws lose a lot of their mystique when superhumans and high-tech weapons get involved.

At this point their only role is to be the high-level monsters (reportedly inspired by the version of the tarrasque  in the first edition of Advanced Dungeons & Dragons, albeit scaled down).

They work fairly well as video game monsters – for instance they could be in DooM or Quake without anyone batting an eye.

A deathclaw dominant female has four additional APs of Damage Capacity, and a CIA toward defending her eggs.

These are back-of-the-envelope calculations that were quickly churned out during the deathclaws discussion and maybe of interest :

My calculations might be off by one Column… lessee, guy with Weaponry (Firearms): 04 and an EV 6 rifle (so basically the best you can hope in much of the wasteland) – 40% to hit the deathclaw’s AV and will do 1 RAP, so on average needs 30 Phases of constant firing to bring down a Deathclaw with BODY 6/DamCap 6.

For a damage output of .77 RAPs per Phase, so that’s about 16 Phases of constant shooting rather than 30 – a bit less with doubles higher than 18. Better bring a lot of friends with rifles and hope the deathclaw doesn’t get the drop on you and has a lot of open space to cross to close in.

Damage output is 2.1 RAPs per Phase, so a bit less than 6 Phases of repeated firing without HPs, on average. Maybe 5 with a nice (sub-10%) double. Having to stay alive 5 Phases against a deathclaw isn’t trivial. In fact they probably should have 7 APs of Claws, not 6.

So as it stands (with the higher Claws) going against a deathclaw means burning HPs to kill them before they can stay close for too long, even for a cinematic shooter with an EV 6 gun.

The Vault Dweller is at about 25-to-30 HPs based on our estimates, so that’s probably enough to endure in an encounter with 2-3 deathclaws if things don’t go wrong (the companion(s) are probably going to be useless against deathclaws), particularly assuming the Called Shot Schtick.

Which sounds about right – a player who know what they’re doing will probably take on the pack of 2-3 deathclaws in the Boneyard without a scratch using sniping-in-the-eyes tactics, though it could go pear-shaped and have a companion die with some bad luck.

Oh yeah – normally I’d assume the Rule of 15, but I see the Fallout environment (at least the first game) as a Hero Points-poor environment, and the rule of 15 assumes aggressive HP spending. Which I guess should be spelled out rather than relying on people noticing the HPs totals for the Vault Dweller and the companions.

Helper(s): Jobe, Roy Cowan , Darci, Ethan Roe. The two illustrations are borrowed from The Fallout Wikia  and come from later games, since using the Fallout sprite as an illustration would be… problematic.