This is a very old entry because, look, we’ve been doing this since 1995 and we can’t replace *all* the old stuff all at once. As I remember it I needed Deathlok (Collins) to appear in my game and thus I assembled DC Heroes RPG stats for him based on what material I had.

Deathlok III is an ordinary man who has been turned into an unbelievably powerful war machine. Most of his abilities come from the onboard computer, which guides his combat routines by submitting him various broad tactical choices. Deathlok thus fights like a man remote-controlled from the inside.

The information for his computers is stored on his biological brain, which has a nearly infinite capacity for data. Data includes :

By the start of the project Deathlok has “the contents of 19 Cray II mainframes” downloaded into his memory, with no end in sight. He increases his knowledge by jacking into mainframes, the Internet, and so on.

Michael Collins was a happily-married computer specialist who worked for the Cybertek corporation on a cybernetics/computers project. Specifically, he was designing prosthetic limbs for the handicapped. However, one day he discovered that his cybernetic limbs were not going to be used for such lofty purposes. Rather, they’d serve as parts for a military cyborg warrior code-named Deathlok.

Collins was outraged. He confronted the company’s CEO. The executive agreed to look into it, then shot Collins in the back with a tranquilizer gun.

Collins was reported killed in a lab accident. He ended up with his brain implanted in the Deathlok cyborg. There were already a few other human organs in the cyborg – those of Col. John Kelly. 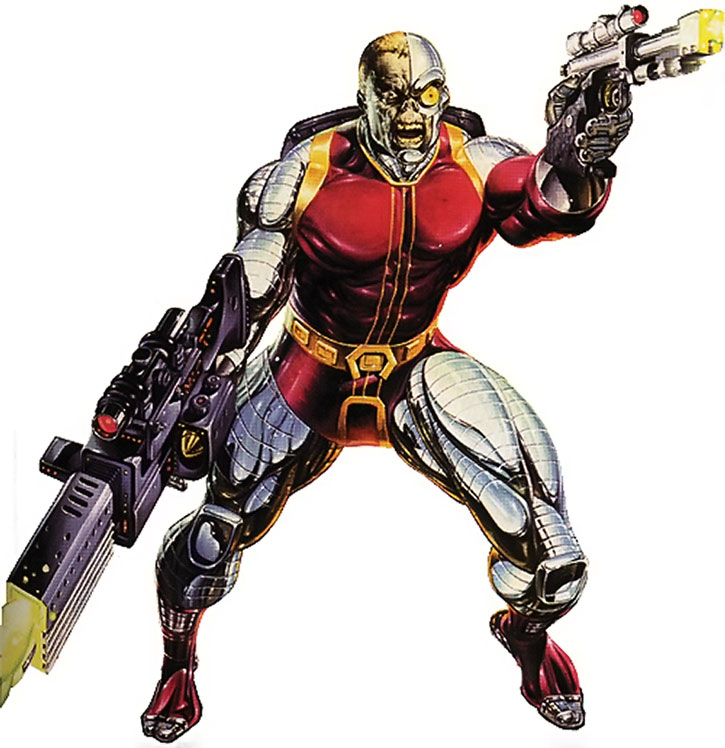 Once everything was up and running, the Deathlok cyborg was deployed at a dam construction site run by a Cybertek subsidiary. Tasked with the destruction of a local village that was causing trouble for the dam workers, Deathlok began to slaughter the innocents.

During the attack, Collin’s consciousness emerged and he commanded the Deathlok cyborg to cease its mission.

Ghost in the war shell

After this apparent malfunction interrupted the trial run, Deathlok was brought back to Cybertek’s New York complex. The technicians determined that the problem was Collins, and prepared to erase his mind, but he broke lose and escaped the complex.

He battled Cybertek warriors as he tried to build a new life for himself, and eventually brought a halt to the corporation’s ambitions with the help of SHIELD. Collins contacted his family and explained that he was alright, but that he had to help with a special, secret government project – he would thus be unable to see them.

Michael then began to search for his original meat body, which he had learned was intact somewhere.

Cyborg on the deck

During his adventures, Collins encountered many problems with his tactical computer, which is like a second menu-driven mind subservient to his own. He has programmed it with a “no killing” parameter. Every time Deathlok is endangered, the first question the computer asks is whether it can relax the “no killing” parameter.

Collins eventually built up the courage to reunite with his family and admit that he was no longer a human being. He also came to terms with the fact that he sometimes used his pacifism as a shield against becoming involved in difficult situations.

AFAIK, Collins is either still an international mercenary, or has found his meat body gone back to the civilian life.

Deathlok is a massive cyborg (7’2” and 825lbs). The right half of his face has a zombie-like quality to it, and the left half is an armoured cybernetic implant with a bright yellow eye.

His costume is somewhat similar to the DCU Cyborg’s, with Colossus-like legs and arms, metallic boots and gloves, red briefs, a red shirt, big shoulder plates and a metallic-blue backpack. There’s a big hi-tech gun at his hip.

Michael Collins is at heart a pacifist. He tried to make the world a better place by designing better prosthetic limbs for paraplegics, and spent a great deal of time with his son trying to encourage him to do what was right, not what was easiest. Needless to say, the conflict between his values and his new life as a war machine has caused him a great deal of stress.

During the Infinity Crusade , Collins was confronted with some of his activities as Deathlok. He realised that sometimes his refusal to fight was simply a refusal to get involved. He realised that he was falling prey to the very thing he warned his son against : doing what was easy instead of what was right.

Collins came through the experience with new-found resolve. He still believes in seeking peaceful solutions, but no longer shies away from the responsibility his great power demands of him. Now he tries to set an example and curb some of his harsher associates’ tendencies.

Due to the comparative lack of cybernetics in the DCU, Deathlok would be a Lexcorp project, with Cybertek being one of Lexcorp’s many subsidiaries.

Alternately, Deathlok could be a S.T.A.R. Labs project, an attempt to break Lexcorp’s hold on the cybernetic market.

The expose of the malevolent intentions of those in charge of the Deathlok project could be a major embarrassment for S.T.A.R. Labs, and Lex Luthor might even try to manipulate Collins into publicizing the “evils” of S.T.A.R. Labs (though this last idea assumes that Lex’s philanthropist façade still exists). 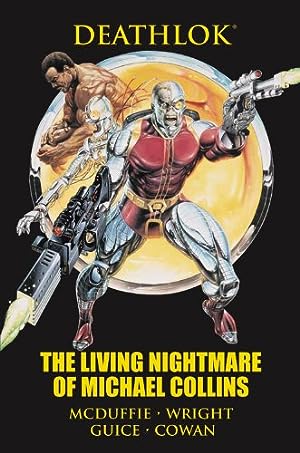 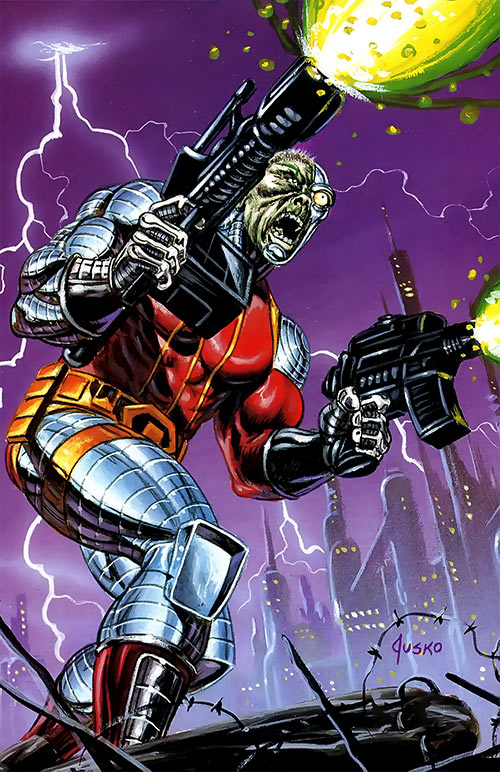 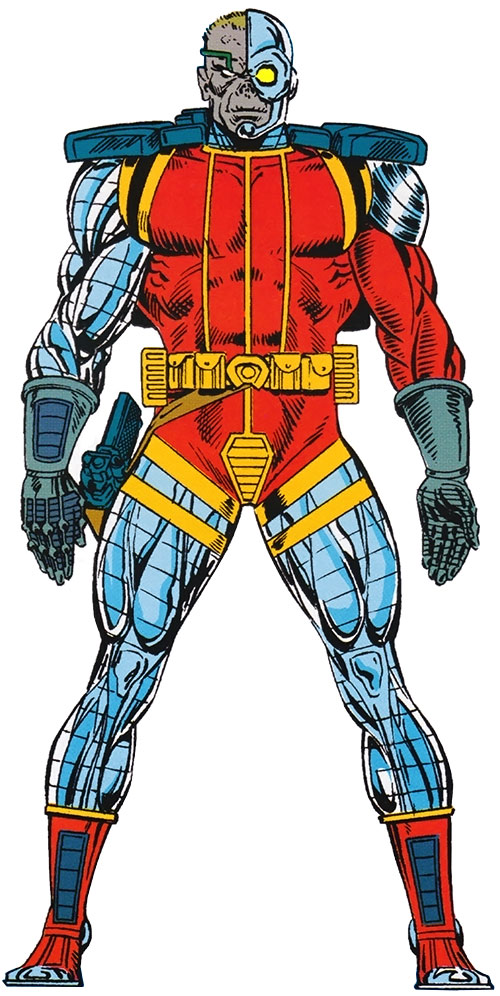 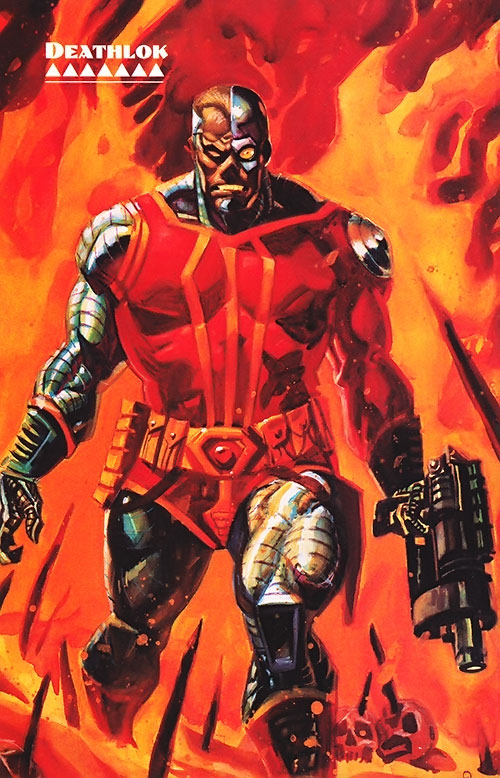 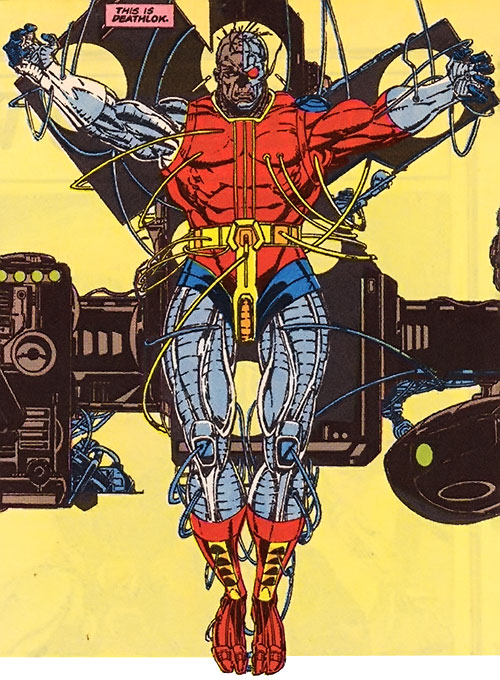