This entry is very old, and is primarily useful as a placeholder with the basic information. It’s going to be redone when we can… in a gritty, dystopian future of callous violence, societal collapse and out-of-control technology… but for now that’s what’s there.

Although he interacted several times with Earth-616  (the mainstream Marvel Earth), Deathlok I comes from a parallel Earth. It’s generally referenced as Earth-Deathlok, though I think we say Earth-7484 now. This Earth split away from the mainstream in the 1970s.

During the 1970s in the Marvel Universe, the international oil corporation Roxxon (and some of its subsidiaries, such as Brand Technologies) was a pretty significant threat. Among the most dangerous plots were the possession of the Roxxon CEO by the Serpent Crow, an artefact closely linked to the evil Elder God Set – and the Nth project.

But Roxxon’s power lust turned the plan into something even more sinister. That occurred when it was discovered that the Nth projector could be used to rip places and people from Earth-616 and send them into parallel dimensions.

The Nth Command (the part of Roxxon wielding the power of the Nth projector) was originally trying to get rid of Project : Pegasus. This major research project into alternative energy sources was a threat to the oil giant, but it was defended by Quasar and the Thing. But they eventually escalated even from there.

The new big plot was to achieve a mass banishment of most super-beings to a parallel Earth. Once there, they would all be quickly destroyed. On Earth-616, Deathlok I came from Earth-Deathlok and he and Captain America foiled the terrible plot. Nth Command disappeared for good. 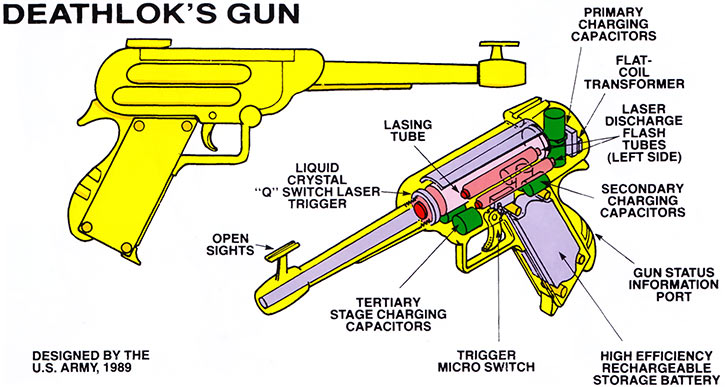 On Earth-Deathlok, however, the plot had worked. Most supers were banished and killed, and Roxxon attempted a coup to take control of the USA. Things didn’t go well at all, and the United States disintegrated into a huge civil war.

This world was also in the middle of World War III. The collapse of the US and a wave of terrorism had opened the way to the Soviet Union. Deathlok was created during this war.

Earth-Deathlok is a brutal, nearly post-apocalyptic dystopia. It is best pictured as something quite close to John Carpenter’s Escape from New York (the ambience is quite similar), with a much bigger SFX budget allowing a bit of the future Earth in Terminator to be thrown in.

There are quite a few combat robots and cyborgs, as well as weird mutants. One example of the latter was a gang of autistic children who could drain lifeforces using small cubes. Roxxon’s rule was weak, corrupt and amoral. Cannibal gangs were a serious problems.

Furthermore the remnants of the CIA, with their H.Q. at Fort Dix, were attempting to both overthrow Roxxon and purge the US of its criminals, mutants and degenerates.

The Earth-Deathlok timeline  was supposed to be the same than Earth-Killraven and Earth-Guardians of the Galaxy. But various continuity errors have most people considering those as three different timelines.

Also, a weird continuity error explained at one point that the heroes of Earth-Deathlok had disappeared due to never coming back from the first Secret War. This explanation is generally ignored in favor of the Nth Command scenario.

Manning was a skilled soldier and special operative. And he is now a highly advanced combat and special ops cyborg. He has significant superhuman strength, and a large amount of sensors. An onboard AI gives him advice, helps him move his body and generally serves as a powerful computer reference.

His proficiency in combat, whether in melee or at range, is tremendous. For instance, he has demonstrated more proficiency at close combat than the Thing himself. The meld of combat experience and programmed, merciless routines make him a pure killer which would make the most bloodthirsty drill instructors proud.

Given the world he lives in, that is a good thing.

Luther Manning himself was an experienced and streetwise military officer. However, he stepped on a concussion mine during a war game. What remained of his body was salvaged by a crazed former US Army officer named Simon Ryker for a secret cybernetic project called Project Alpha-Mech.

Alpha-Mech’s goal was to build powerful cyborg warriors so Roxxon could end the civil war and impose its rule over the United States. Manning was thus rebuilt into Deathlok, a powerful combat cyborg with a computer cohabiting with his brain.

Unable to commit suicide as he wished due to his computer’s programming, Manning nevertheless managed to escape from Ryker. Thus, he became a free agent in his nightmarish world. Deathlok would sometimes ally with the CIA, who promised him that they would create a fully human clone of him in order to transfer his mind back to flesh.

He met his wife early in his career as a combat cyborg. But she was understandably horrified by his appearance and had remarried his best friend. The Demolisher never saw her again.

The CIA did indeed create a clone of Manning. However, when the operation to transfer Deathlok’s mind into the meat form was attempted, it was a copy of his consciousness that was made. There was thus a fully human Luther Manning, and a Deathlok cyborg, with identical consciousnesses.

Deathlok was then sent on Earth-616 by the mysterious Godwulf. The plan was to foil the plot of Nth command in the past so Earth-Deathlok would never know such terror, death and tragedy. Unfortunately, Deathlok was quickly captured by Mentallo and the Fixer. They reprogrammed him to have an unstoppable cyber-assassin and sent him after the president of the USA.

The Thing stopped and captured Deathlok. But while the US government managed to undo the Fixer’s and Metallo’s manipulations, the cyborg was then kidnapped by no other than Roxxon. Roxxon derived a fully robotic Deathlok entity from the Deathlok cyborg.

This robot Deathlok was sent by the Nth Command against Project Pegasus. It was destroyed by the Thing – who thought he had killed the Deathlok cyborg.

Meanwhile, on Earth-Deathlok, the fully human Luther Manning wondered where his cybernetic other self had disappeared. Thus, he located Godwulf and asked to be sent on Earth-616 to conduct the mission. Since Earth-Deathlok still existed, they deduced that the Deathlok cyborg had failed.

Luther Manning had more luck on arrival than his cybernetic self. He contacted Captain America. Cap and the human Manning infiltrated Roxxon. However, they were intercepted by Deathlok, then controlled by Roxxon – who shot his organic self to death. Yet the fully organic Manning, before dying, allowed Deathlok to overthrow his Roxxon programming.

Deathlok and Captain America then thwarted the plot of Nth Command. This prevented the banishing of super-heroes, the coup, and the Earth-Deathlok timeline.

Parallel timestreams being what they are, Earth-Deathlok still existed. Simply, it wouldn’t be the future of Earth-616. Thus Manning, Captain America and Deathlok I travelled to Earth-Deathlok. With the help of Godwulf and a band of freedom fighters called the Redeemers, they defeated the big boss of Roxxon. It was Simon Ryker’s brother – Harlan Ryker, aka Hellinger.

With Roxxon defeated, a democratic government could more or less be restored.

However Deathlok the Demolisher was seen again when Timestream, a senior technician on the Nth at Roxxon, attempted a complicated plan. The goal of his time manipulation was to to prevent Captain America, Deathlok and their allies from destroying the Nth project in the past.

During this adventure, Deathlok encountered the Luther Manning of Earth-616 (who was briefly turned into a Earth-616 version of Deathlok the Demolisher by Timestream) and Deathlok (Michael Collins).

Some events later indicated that Deathlok used Godwulf’s machines to come to Earth-616, and is living in the sewers of New York City.

Deathlok is about 75% machine. He has a shiny, metallic, smooth, human-looking body. He wears red boots, briefs and shirt, but his right arm and both his legs are left bare. His neck and most of his face are organic, but he looks a bit like a zombie with a grey skin and greenish hair.

His left eye his glowing red and is quite upsetting in dusk or darkness. He has a small US flag opposite to the heart.

Deathlok is a bitter, very violent character. He would gladly kill himself if his computer would allow him to. While he’s more or less benign, he’s very much the anti-hero.

Luther Manning, the human inside Deathlok, talks like a man from the streets. He is gruff, tough and sarcastic.

The computer inside him (which he addressed as ’Puter) is completely devoid of emotion and perfectly logical. Once, when Manning was holding the corpse of a dead friend, the computer simply advised him to “jettison unnecessary burden”. The computer tends to talk in intricate technocratic jargon.

Deathlok also has a third personality, a merge of the two above. It is completely psychotic. It can only make rambling, incoherent speeches within the consciousness of the man and the computer. Those annoying episodes may bring confusion, and are represented by the MPI.

Just keep Deathlok I in his original alternate universe. Please. 🙂

This setting was great, and inspired various later works of science-fiction. It would be a shame to rip important parts of it such as Deathlok away from it. Much better to have the PCs reach this highly dangerous timeline.

Bonuses and Limitations:
Density Increase is Always On and Already factored in (-1). 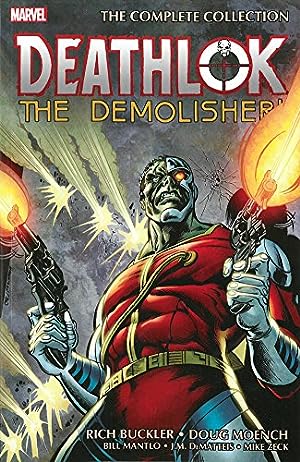 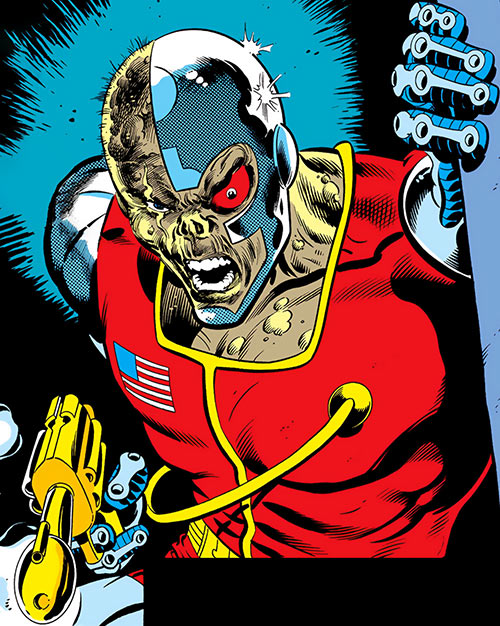 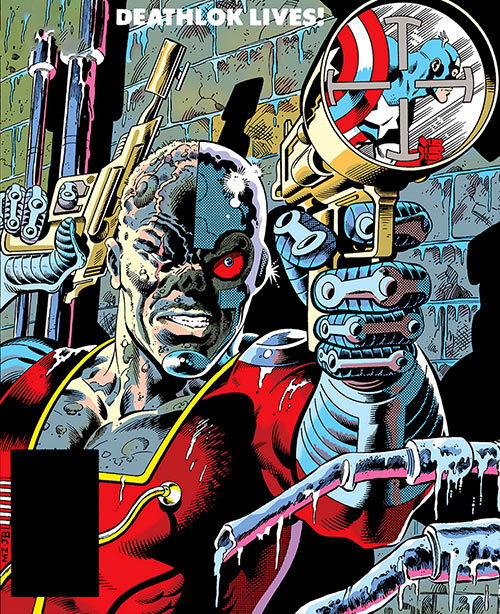