Deathmask is a psychokiller with a big knife. He’s something out of a slasher movie.

He can also cut the skin off people’s face with his blade. If he wears the skin on his own head, his superhuman power will turn him into a perfect lookalike of the deceased. So it’s kinda like The Hidden.

The serial killer Deathmask appeared one day in San Francisco. He would kill a person, wear their skin, meet with somebody connected to the victim, kill them and carry on the cycle.

Deathmask was the Night Man’s first case, and the budding hero failed. He couldn’t stop Deathmask from killing a waitress called Ginger Robinson. This death would haunt him for months.

After Robinson’s murder, the Night Man and Deathmask fought again over a stormy sea.Deathmask was thrown overboard and seemingly killed by a shark.

However, he survived. Deathmask came back months later to avenge himself and wear the Night Man’s face.

While he badly wounded Night Man, Deathmask seemed to die again. He was struck by lightning while dangling by a metallic ladder under an helicopter. No corpse was found.

An horror movie slasher, who has killed hundreds of ordinary persons to steal their face.

He’s obsessed by taking faces, and, for some unclear reason, by the concept of destiny. He’ll often claim events were preordained and consider small incidents and strokes of luck as being his destiny. 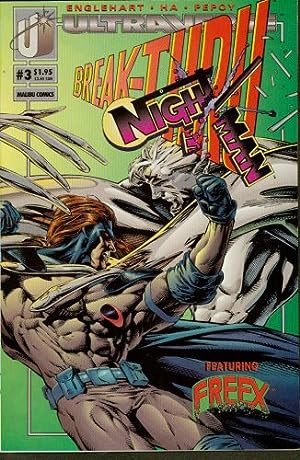