Dr. Page is an accomplished physicist and a capable technologist. He knows “atomic secrets”, as was the style of the day, pertaining to cobalt bombs. He’s also an adept equestrian.

As Death’s-Head, he generates large amounts of cobalt radiation. That translates as :

The latter seemed to be a mix of radioactive vigour and insanity-driven strength. Death’s-Head thus could fight Daredevil (Matt Murdock) toe-to-toe, especially when mounted. Daredevil commented that Page had the strength of a dozen men, which for once seems mathematically correct. Good show, Matt.

Back during the 1960s, Dr. Page was a famous scientist. He had perfected the cobalt bomb technology, but then refused to divulge his research. He stuck with this decision even when threatened with contempt of Congress. 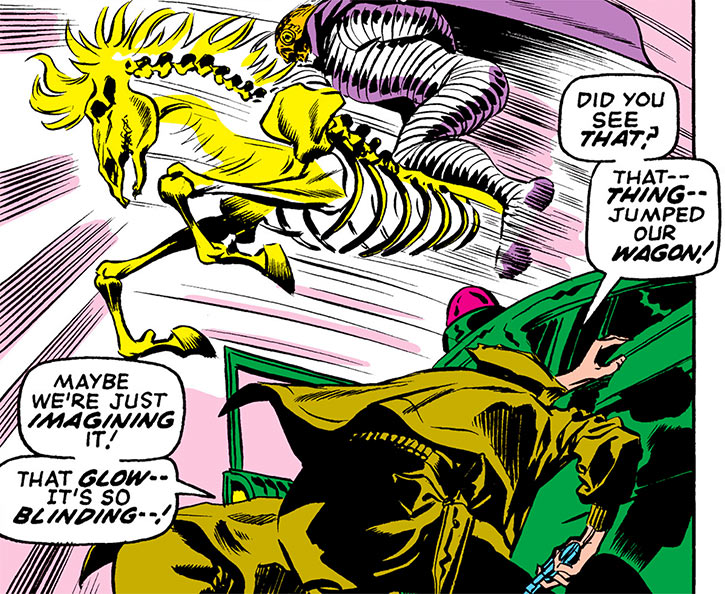 (Back then, cobalt bombs were a prime example of Cold War dirty bomb, meant for maximum fallout. Unlike with the real world, several were built in the Marvel Universe. For 1960s readers, it was obvious that Page refused to tell his secrets for fear that such a horribly destructive weapon become part of Cold War arsenals.)

Page returned to his family home. In 1969, he resumed his experiments. The US government sent a bodyguard, who infiltrated the Page household, to keep enemy spies at bay. However, further exposure to cobalt radiation quickly eroded Dr. Page’s mental and physical health.

The insane Paxton decided he was now another person, called Death’s-Head. This persona was based on an ancient “Aztec” mask kept in his house.

(It presumably was Nahua, since “Aztec” is an exonym that doesn’t mean something precise. But I don’t know enough to be sure.)

Years before, this horrible-looking curio gave recurrent nightmares to his daughter Karen. In these, a burning rider wearing the mask hunted her down.

Death’s-Head pretended that he had kidnapped Paxton Page. He then tried to scare everyone away from his house. He also altered a horse and built equipment to supplement his persona.

Days later, a grown-up Karen Page returned home, seeking the quiet of rural Vermont. Both she and Daredevil, who came looking for her, ran into Death’s-Head.

Though he only sought to scare Karen and her mother away, Death’s-Head attempted to kill Daredevil. He didn’t do a bad job of it, wounding the crimefighter in both shoulders.

Death’s-Head even captured DD for a short while. He clad him in a replica Death’s-Head costume and sent him galloping at cops, so the crimefighter would be shot dead. But Murdock survived. The horse, on the other hoof, soon died of radiation poisoning.

The government man, shadowed by Karen, then discovered Page’s hidden lab. Death’s-Head again attacked Daredevil therein, gaining the upper hand. But when Karen was in danger, Death’s-Head dove to her rescue. This resulted in him being crushed and burned to death by molten cobalt.

An eerie figure looking like a glowing Nahua mummy. Albeit one wearing a cape, for… Nahua fashion reasons.

“‘Dream’, mortal ? I am no dream — but one who haunts the darkened byways of reality — and who makes of the waking world more fearful than the deepest nightmare !”

“I bring a message… from the powers that walk the night ! Leave this forbidden tract, on the same path by which you came ! Disobey my command, and not all the forces of Earth shall save you from the hordes of Hades !”

He could have been a brief encounter for any published-in-1969, not-too-powerful DC character.

For instance, it’d work for Robin (Dick Grayson), the Atom (Ray Palmer), Hawkman or Aquaman. But the best solution is to make him an old Wildcat (Ted Grant) foe. Wildcat fought a character masquerading as the “Headless Horseman of Central Park” way back in Sensation #16.

Bonuses and Limitations:
Flame project can have a 0-AP Area of Effect, but that lowers the AV by one CS. Unless the projectile being slower and easier to read wouldn’t affect the shot.

Bonuses and Limitations:
Weaponry is a Powered Skill, and Contingent Upon his DEX.

I’ve a horse outside

How Page’s horse remained alive for days is a mystery. But it seems enhanced in the same ways as its rider.

Bonuses and Limitations:
Evasion is only effective in low light, as the horse glows too brightly to really aim at. This also protects the rider. It is Contingent Upon Flash, and a Powered Skill.

* Without Defensive Roll
** On horseback

The bola may also be throwable (Snare 5 ?) but that was never demonstrated. The horse is counted as equipment (32 points of it) since it has no small-i initiative.

I’ve a horse outside

Writeup completed on the 1st of February, 2018. 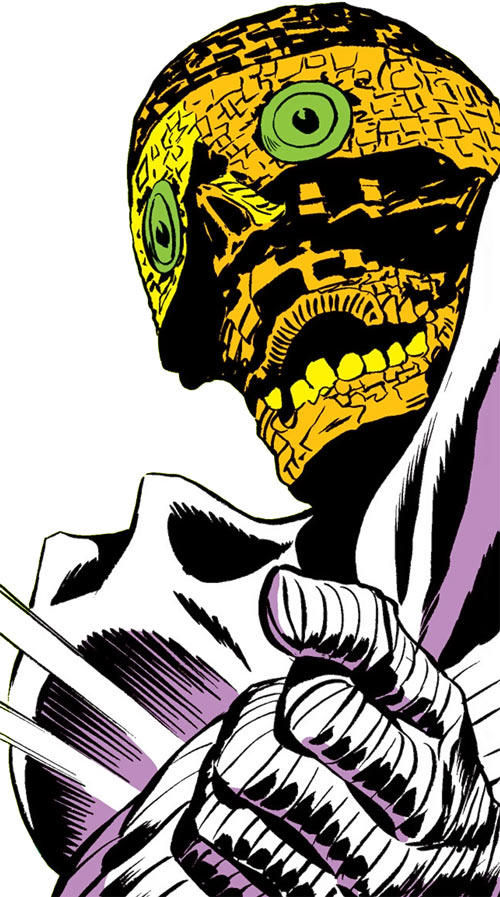 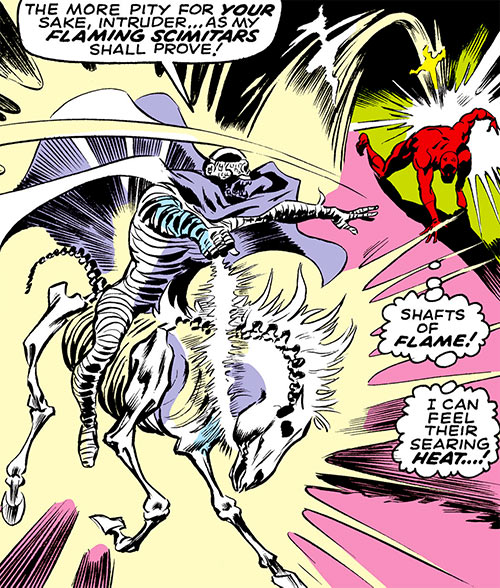