Harmon has built himself a set of power armor . It is not unlike that of Iron Man, though it hasn’t near as much the utility. Apart from its obvious protective capability, its weapons array allows him to dish out more damage than an average platoon. Furthermore, his boot jets provide him a great deal of aerial maneuverability and tactical advantage.

In combat, Defender generally prefers to use his Electro-Bolos. These can restrain an opponent without harming them. He may also attempt to blind nearby opponents with his searchlight. If those tactics don’t work, his Electric Blast is his first option for single foes, or his Pulse Bolts for groups. That is, unless his opponent has electrical powers, in which case he’ll try his EMP .

Only in the most desperate situations will he resort to his Overload Blast. He has a deep respect for all life, and risks using his full power only when absolutely necessary.

James Harmon IV grew up surrounded by the portraits of his famous ancestors. There was:

James III, who fathered his son late in his years, made it abundantly clear he expected young James to establish a similar record of accomplishment, “to give back to others of what you’ve so richly received… intelligence, money, and strength.” His father’s wish was always to witness his son’s achievements before he ever passed on.

However, all James really liked doing was puttering around with electronics and computers. Yet, perhaps he could satisfy his father with some sort of technological breakthrough ?

Then one day, he watched in horror as supervillains destroyed Detroit. Someone needed to protect those people, and he could be just the man to do it. He built himself a suit of powered armor with the best systems his genius could design and his father could afford.

Christening himself Defender, he would join the forces of truth and justice and… promptly get his armored behind handed to him. Humbled, and learning from his mistakes, he put out the word that he was looking to form a team of heroes. This team, The Champions, would then go on to help save the world on numerous occasions.

Defender is the epitome of the word hero. He gives of himself unconditionally, taking on any mission to combat evil or save the helpless. He cares nothing for the dangerousness of a situation if only he can do something helpful. 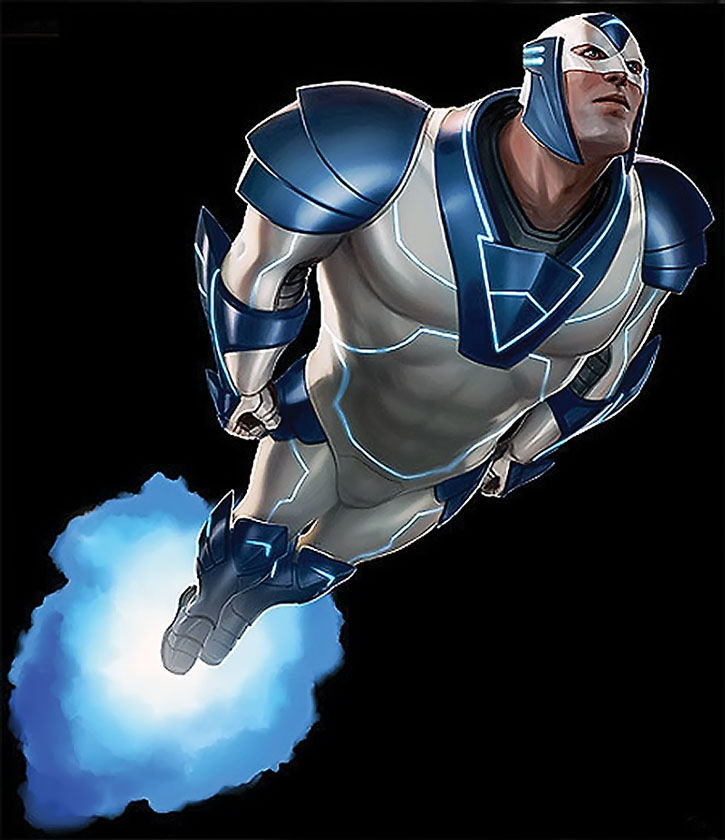 He considers himself a role model and conducts himself accordingly. His attitude and achievements have inspired respect and admiration across the nation. Harmon takes advantage of that fact in order to lead charity drives and help other causes.

With his good looks, poise, self-confidence, and reputation, it’s no wonder James attracts a lot of female attention (including among his teammates). What’s surprising is that he seems oblivious to it.

He’s not an anti-social, “relates better to machines than people” type. It’s just that he gets so caught up in his mission that he overlooks the possibility of things like romance.

Despite his accomplishments, James continues to feel the burden of living up to his famous ancestors. It doesn’t help that his need to maintain a secret identity (to protect his family) prevents him from claiming credit for his deeds.

As a result, his parents, especially his father, now quite up in age, sadly still think of him as a playboy and disappointment. That’s even though he’s already put all of his ancestors to shame.

Even though one of his teammates is a powerful mystic, he refuses to believe in magic. He’s convinced there is a rational, scientific explanation for such abilities.

“All right team, let’s hit ’em hard ! If they make it past us, millions of lives are in DANGER !”

In the 5th ed books, Defender’s powered armor has a black framework, blue breastplate, belt/trunks, thigh and arm bands, golden gauntlets, boots and helmet with red faceplate. Out of his armor, James Harmon is a tall, dark-haired man in his early 30’s, with a sort of casual handsomeness many women find irresistable. He favors “dressy casual” clothes. 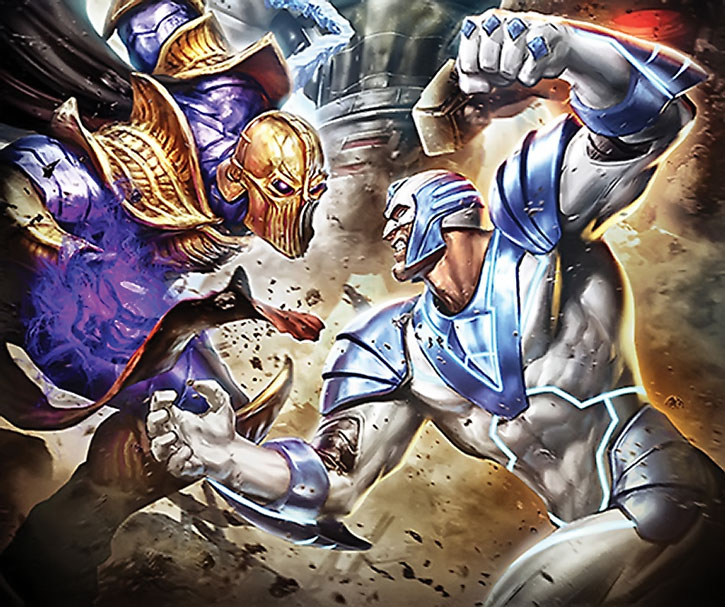 The Champions MMO has greatly redesigned Harmon’s look. His color scheme changed to white with blue shoulders, bracers, boots, collar, and hipplates, and grey bands along the insides of the joints. The faceplate is gone and his neck is uncovered. The helmet covers the top half of his head, with the blue portions descending down past his cheeks and jawline.

Glowing electric blue outlines are visible upon the darker blue armored pieces in a sharp, chevron like, design as well as on the white parts of the arms, legs and torso, patterned to give the outfit a high-tech armor plate appearance. How this version differs from the one in this profile remains to be seen.

The DC Universe doesn’t have many direct Tony Stark/Iron Man analogues other than perhaps John Henry Irons/Steel and as such could probably fit in as-is. Defender would probably work best as yet another wealthy industrialist like Ted Kord or Bruce Wayne.

He might also be an ex-employee of STAR labs, or some other technological think tank.

Drawbacks:
SIA toward Living up to family reputation of achievement, SIA toward Disbelieving in magic, Limelight, Secret ID.

This writeup is based on the 5th ed version of the character. I’m not sure how similar the 4th ed version is to the 5th, since I don’t own it.

AP levels are modelled more after what I feel is the spirit of the character than being based upon any necessarily specific numerical conversion. This is another where some things were rather powerful, but other parts seemed remarkably less so. I had to boost a thing or two, since a direct, literal translation left him unimpressive in some areas for someone so high-profile. 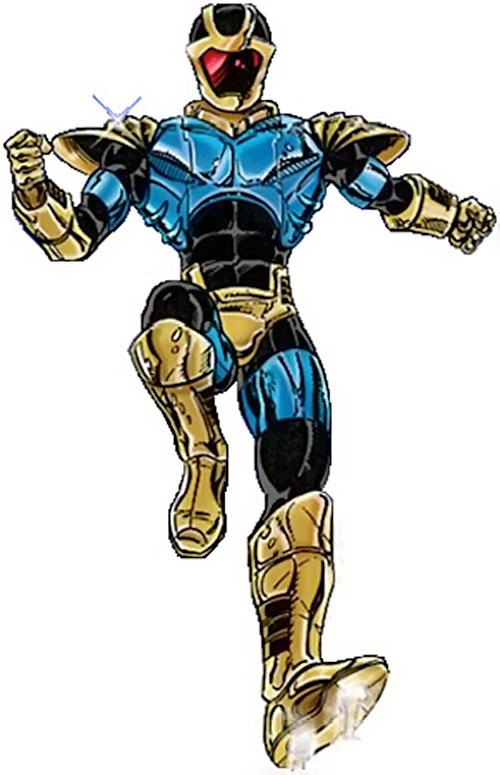 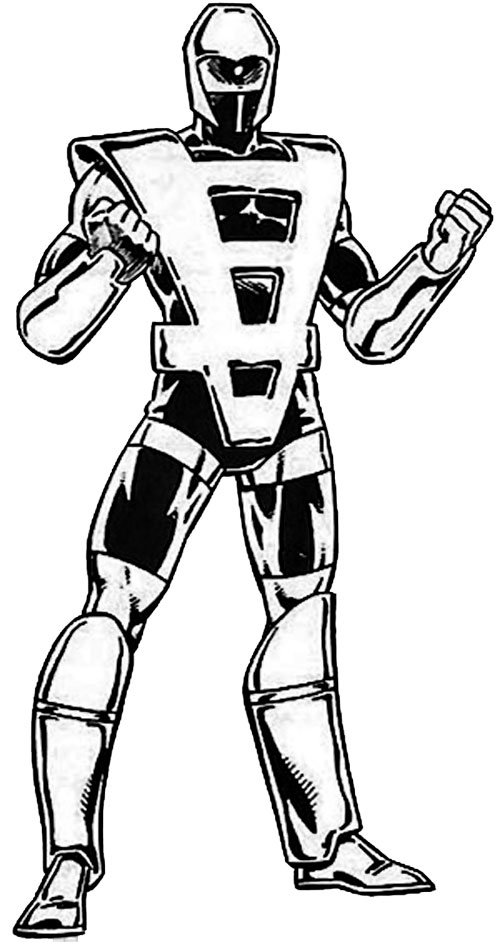