We need to gather samples.

Defiance was an ambitious transmedia project of the 2010s. It had a post-apocalyptic sci-fi storyline.

The biggest part was a live-action Defiance TV series, wot aired on SyFy. It had three seasons, from 2013 to 2015.

The other big part was a looter-shooter massively multiplayer online video game, from Trion Worlds. It started as Defiance, then had an overhaul as Defiance 2050. It ran from 2013 to 2021.

Scope of this profile

This article is based on the Defiance 2050 game, plus online promotional/fandom material for the show.

It was written shortly before the Defiance 2050 game was taken behind the shedAn euphemism about killing an animal.. To document things therein before it was too late.

At this stage it *doesn’t* incorporate material from the TV show.

The approach is similar to our Destiny 2 sample character profile :

By the time I could start the research some online resources had already fallen to corporate indifference. So deductions to fill these gaps might be wrong.

We’re going to cover an entire setting, plus a character, plus weapons/technology, plus the game’s plot, etc. etc..

That’s a lot, so let’s cut this thing into smaller, easier-to-read articles.

This profile has a higher density of screenshots than usual, mostly to show environments. Since by the time you read this, the game’ll be gone. 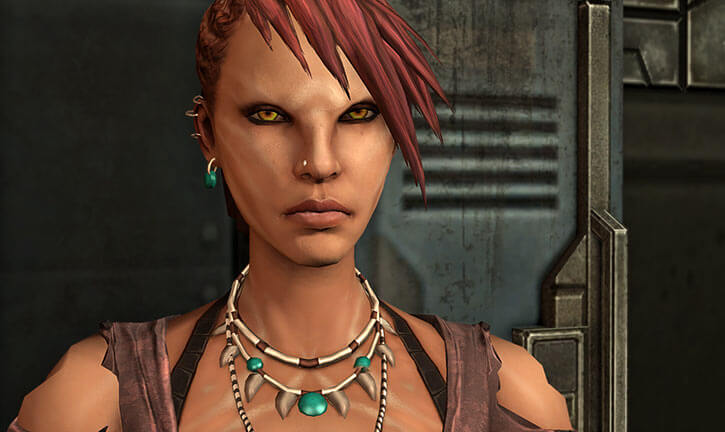 Mercenary troubleshooter Cass Ducar, one of the game’s major NPCs, has fairly typical looks for a Votani lass of the Irathient species.

The crisis started in another part of the Milky Way – in the Votanis star system.

But the whole was doomed. A star was hurtling their way, on just the right trajectory to collide with their own.

After decades of scientific advocacy, the interspecies council admitted that evacuation was the only option.

It was almost too late by then, making the process awful. There was too little room on the Arks – much of the population had to be left behind. And a lot of the necessary technology had to be invented PDQPretty damn quick..

Those who had a berth on the Arks would undergo 5,000 years of suspended animation. During that time the Arks would reach a different part of the galaxy, where an inhabitable exoplanetA planet located in another star system. had been detected.

The Humans of 3,000 BC hadn’t been giving off electromagnetic emissions, making the planet look uninhabited. But when the Arks arrived and awoke some crew in 2012, things had considerably changed.

Earth governments had detected the incoming Arks ten years before – via the Voyager I probe. This was kept a secret for as long as possible. Covert preparations included forming the secret Earth Military Coalition (EMC).

(At the latest, Defiance’s Earth and the real world’s history thus diverge circa 2000. But there are hints about the divergence having taken place earlier).

First contact was a mutual shock. Both the Votanis Collective and the Earth Military Coalition ran nasty covert operations in case a conflict erupted. Negotiations for the space refugees to be granted land ran for years, without much progress.

Though relations weren’t bad per seIn themselves., xenophobic factions on Earth saw refusing to cede land as their life-or-death struggle. This increasingly led to riots.

Factions among the Votanis also rejected compromise, arguing that they had already suffered too much. 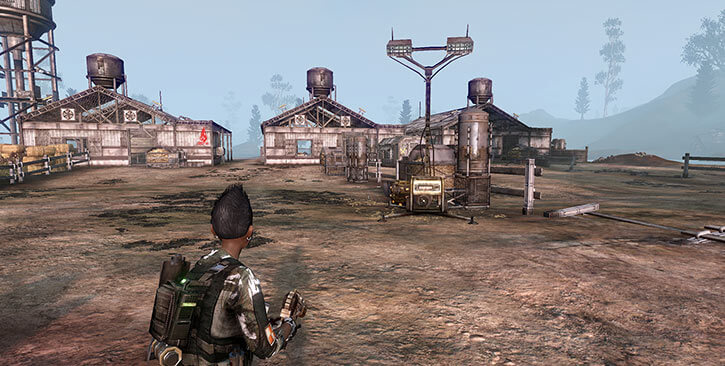 A low-population region deep within the Amazon rainforest was eventually ceded. In the late 2010s and early 2020s, some smaller colonies were agreed upon.

A media-friendly success was the town of Tranquility, apparently in Canada. It was a mixed community with all six Votan main species, and Humans. More followed.

To derail this, a bitterly xenophobic Human fatally shot the Votan ambassador at the United Nations. This led to riots, with brutal clashes between the NYPD and alien protesters, and eventually martial law in New York City.

How the situation degenerated into the Pale Wars in 2023 isn’t detailed. American characters mention a catastrophic battle in Saint Louis, then another in Oklahoma City.

Furthermore, a significant chunk of the fighting seems to have been intra-Votan and intra-Terran conflicts, flaring up due to the Pale Wars proper.

The EMC was outgunned. Obviously, the Votans had better tech. Still, a number of wartime advances were made on Earth. These included :

In 2030, most Arks in orbit exploded and crashed, for unknown reasons.

Furthermore, the Arks’ terraforming machinery activated during the crash. Large areas were warped to resemble ecologies from Votan planets – in the best-case scenario.

Out-of-control terraforming machines made major alterations to Earth, some on a continental scale.

Telecoms were also pretty much destroyed, starting with satellites. Most infrastructure and cities were wrecked. The atmosphere was full of debris. Billions were slain.

Both the show and the game start in 2046. Sixteen years after the Arkfall, Earth can fairly be described as a post-apocalyptic setting.

Two-minutes trailer for Season 1 of the TV show.

The area isn’t *massively* altered. It’s still the same lovely Mediterranean climate. Though personally I hope that this tree I’m allergic to is gone, but I digress.

Between the Pale Wars, the teraforming, the Arkfall, etc. there are very few buildings standings. And the area was apparently quite rural to start with.

Plus, I suspect that most coastal towns were sunk during the Arkfall. As the coastline doesn’t seem to be quite like the real world’s Marin County.

Most remaining structures have been blasted open. There might be floors remaining, some walls, etc. but it’s mostly rubble. The stoutest, ground-floor-only concrete buildings might still be usable for shelter though.

Most of the inhabited structures seen in-game are cobbled together using wood, corrugated iron, packed earth, tyres, etc.. It’s much like what you can find in a particularly poor, rural area of the real world.

Most such buildings have to do with farming or ranching. People gotta eat, and growing stuff in an ecologically altered post-apoc world is even harder work than normal farming.

A few others are waystations for convoys.

Most of the energy seems to be local wind, and/or local solar. It’s small-scale, but the needs aren’t exactly huge. 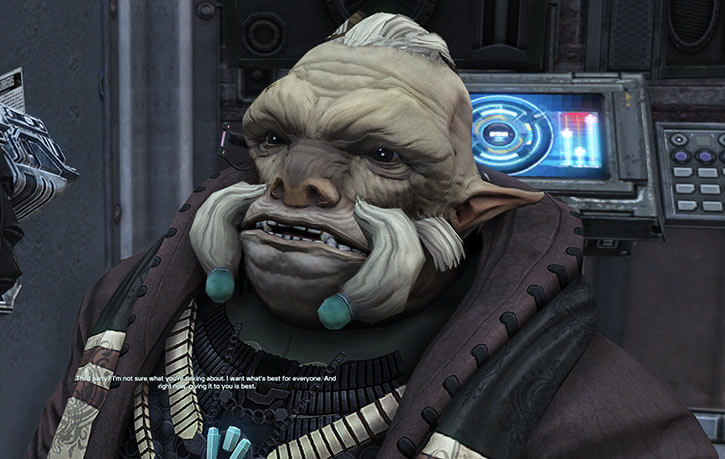 At the close of 2030, they were caught between parts of the EMC’s Ninth Division, and a joint Votan task force called the Ekaru Kome. But there was a brief truce during the fighting, to recover a civilian caught in the crossfire.

At this point, soldiers on both sides decided that they’d had enough of this crap. They mutinied, and joined forces to protect New Tranquility’s mixed population.

Some nerd put on an improvised “Fort Defiance” banner on a building. As a result :

The area was soon hit by a WMD, killing most people.

But words of the mutiny travelled far and wide. This was a key factor in having the Pale Wars wind down, as most combatants saw the folly in continuing the devastation.

(The “Fort Defiance” building is stated to have been the Palace of Fine Arts. However, the real-world PoFA  is on the other side of the Golden Gate Bridge. So either the Palace had a different history in this reality, or I missed something about where the Battle of Defiance took place.) 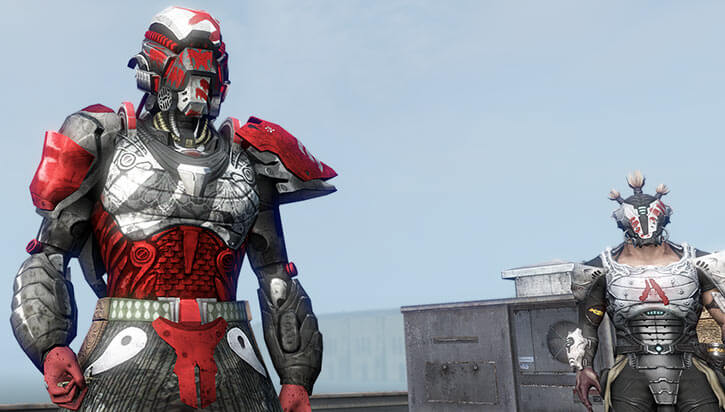 Defiance 2050 includes collectable audio logs about past events. These seem to be lore nuggets about otherwise unanswered bits of backstory.

The ones that popped up during my playthrough :

The ruins of New Tranquility are those of a modern, fairly affluent Californian exurb. However, the remaining municipal signage is in English, plus three alien scripts. Oddly enough, there’s no Spanish signage.

Near the end of the game, we learn that the explosion that razed Fort Defiance had actually been set off… by the Defiant Few. They used Ark technology to destroy the Human and Votan armies that were about to massacre everyone at New Tranquility.

Though they knew it would also cause great devastation, it was the only way they had to give survivors a chance to flee. 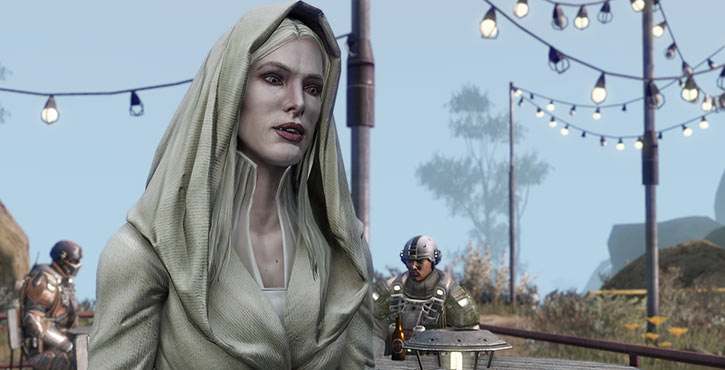 Stahma Tarr is a dreaded Votani noble of the Castithan species, who are near-Humans. She’s a major character in the TV show and does a “guest appearance” in the game.

The Mount Tam area  has a strong radiation count. This seems to be fallout from the WMD used during the Battle of Defiance.

Unprotected persons will, over the years, accrue radiation damage.

Quick note about mutants if I may, thx

One remark implies that this radiation is a source of mutation for some locals. However, this was probably a joke and/or an uninformed remark.

What we can actually observe is :

Still, it’s possible that the radioactivity plays a role in the altered physiology of some locals. Not making them 1950s-style “atomic mutants”, but damaging their altered DNA and organs in consistent ways.

This article continues with the second half of the material about the setting.