A vigilante fighter, Drue is an expert horseman, marksman, tracker, melee combatant and speaker. A true veteran in his trade, he is capable of bringing down the most feared of criminals and sinners. He likely knows the Bible by heart.

His greatest asset is, of course, the Book of Mercury that allows him to change reality itself.

The Book of Mercury

The artifact know as the book of Mercury is possibly the most powerful object in the known universe.

Way back at the dawn of time, the goddess Demeter was given a book by the god Hermes. This tome was the embodiment of language, story and history itself. In essence, it was the story of the world, already written and waiting to be played out. As such, the Book is a infinite source of information.

The most amazing ability of the book, however, is the possibility of to edit out existing stories therein, and then to replace them with new stories of one’s own preference. Thereby recreating all of reality to fit the new story!

In addition, the Book endows its current owner, with such benefits as enhanced intelligence and longevity.

Deliverance Drue was born in the 17th century. In several ways being different from the rest of mankind, the least of him being an albino, he chose to pursue life as a vessel of the Lord’s vengeance and righteousness as the puritan known as Deliverance Drue.

During the course of his many adventures he eventually discovered the Book of Mercury in the possession of a nest of witches in New England. The Book of Mercury is a little-known artifact of tremendous power. Drew would benefit from its power in many ways, the primary being the extension of his lifespan.

In 1868, Deliverance Drue was 215 years old. He had a reputation as a crazy, old puritan. He was a respected and feared vigilante in the Wild West. Drue had impregnated his servant Eliza Smith, who revealed to the legendary gun-fighter and hero Kid Thunder that everything is written in The Book of Mercury.

Kid Thunder will have his revenge

Kid Thunder vowed to unwrite what Drue had written. Kid Thunder managed to take the Book of Mercury from Deliverance Drue. He then met with fellow heroes Night Eagle and The Brimstone Kid, who recognized the powerful magic of the item. They chose to leave the matter alone to Kid Thunder’s handling. 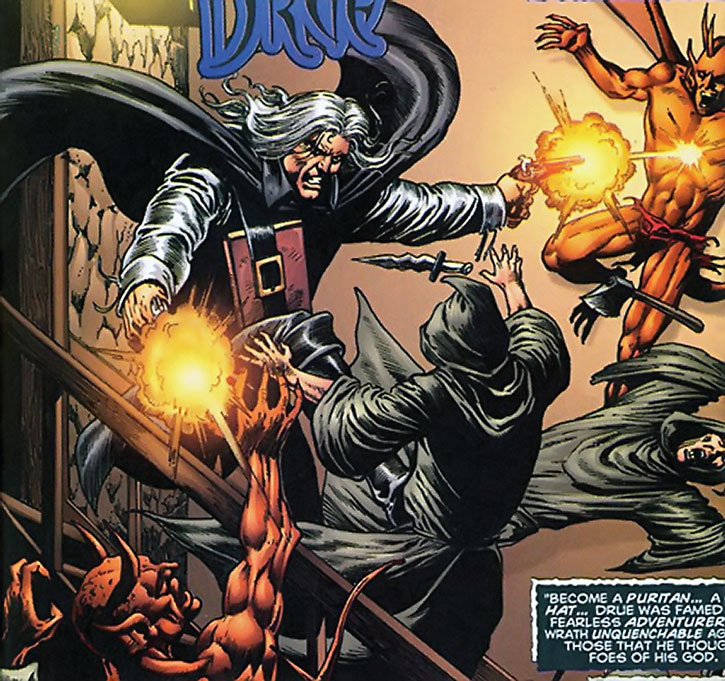 Deliverance Drue, hot on the trail of Kid Thunder, tracked the Kid to a cave. The Kid attempted to ambush the old-timer, but the puritan was too wise. He wounded Thunder by shooting him with two musket bullets.

However, before Drue managed to finish him, the Kid took the book. Using his blood, he scratched Drue’s name out of The Book of Mercury. As an result Drue immediately exploded, cursing the Kid and all his relatives with his dying breath.

The Book of Mercury would temporarily be hidden away from humanity. However, in the 20th century, the great grandson of Deliverance Drue would again come into possession of the Book of Mercury. He used its power to turn himself into the hero known as Storybook Smith.

Smith, in turn, used the book to see to it that he would have a daughter who’d become a superheroine. She would get her powers from an accident, and be known as Riptide.

But he then lost the Book to a junkie. This man’s son, doomed to die at an early age from a life of crime, would use the artifact to alter history and to become the heroic Sentinel.

Deliverance Drue is a giant of an albino man of indeterminate age. He appears to be in excellent physical shape.

Drue is clad in classic puritanical clothing. He carries several weapons, such as a sword, revolvers and a musket. He wears a full uniform in grey and brown, high grey boots, grey gloves, a high purple hat, a large purple cloak, a basket-hilted sword, crossed purple belts over his chest and a musket in his hands.

The Book of Mercury is kept in place inside the belts on his chest.

He has long, white hair and is often seen riding his horse, Augustine, looking to spread the word and justice of the Lord through the bullets of his musket.

Deliverance Drue is a grey hat, a puritan warrior. He has a forceful personality fueled by the fire of fanaticism. Given an unusual background, it seems that he sought refuge in the work of the Lord. And although his intentions might have been good from the start, he has gone too far in his struggle.

He is, frankly put, a religious lunatic. Seeing himself as a vehicle of the Lord’s vengeance on Earth, he spends nearly all his waking hours hunting down those he perceives as sinners and criminals.

His standards are exceptionally high. Although he occasionally appears to break these standards himself (such as when he impregnated his own servant, or when he rewrote the story of his life using magic), he accepts no shortcomings in others. Bringing vengeance in the name of the Lord, he can’t be stopped or be allowed to fail at any cost.

He has an unquenchable wrath against those that he thinks foes of his God.

He thinks of the Book of Mercury as a holy book capable of granting him miracles from the Lord. Knowing its awesome power, he will guard the book to his dying breath as it allows him to continue his work and it has to be kept from the wrong hands.

He speaks in Shakespearian tone, mixed with religious dogma and classic wisdom. His enormous focus and resolve are evident in his every word and manner, and those who hear him speak often think of him insane.

If asked about his unnaturally high age, he will tell them that he has been spared by the Lord to do his work, and he believes it himself.

He has gone too far in his crusade and now appears to be quite insane, although he has never stopped following his own vigilante code. Drue is not above gloating before fallen opponents.

Insanity clouding his judgment, he will sometimes hunt down well-known heroes as well for some perceived slight (particularly if the book is involved). He will curse opponents and is surprisingly happy when he has gunned down the last criminal with a wry smile. No rest for the wicked.

“Stay your hooves, Augustine. Surely God hath brought me within smiting distance of mine enemy ? Through this deluge is spied a light, high in yon rockface. It is a fiery pillar that shall guide me as it did the Israelites. Guide me to that source of life eternal taken from me ! Hear me, cohort of the Anti-Christ whose name is Thunder ! My wrath is upon you and your seed ! The mills of God grind slowly, but they grind exceedingly small. So speaks Deliverance Drue.”

The Book of Mercury

The Book of Mercury [BODY 08, SPIRIT 20, Continuum Control: 30, Enchantment (Mystic Linked, Mental Attributes only): 06, Scholar (History), Omni-Scholar, Slowed Aging, Notes: Continuum Control requires that the owner recreates reality by rewriting stories in the book by crossing over existing text and writing an alternative history above it (-2)].

The mere presence of the Book stimulates intelligence and the owner may add APs of its Enchantment Power to his/her Mental Attributes as long as he owns the book (add 2 APs each to each of Dru’s Mental Stats as long as he keeps the book).

The owner may look up information about anything using its Omni-Scholar advantage by paying the appropriate Hero Points fee.

The book’s owner gains longevity in form of the Slowed Aging advantage as long as he owns the book. 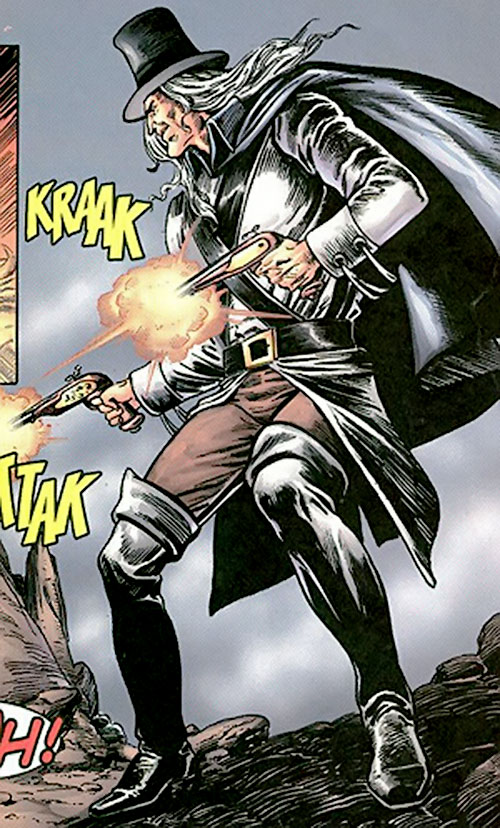