This is the second half of the Delphyne Gorgon character profile. So you need to read the first half first.

Yes, the article ain’t *that* long, but we erred on the side of caution. For the sake of people reading the site on so-so smartphones.

When Hera established her Olympus Group corporation in the mortal world, she called Delphyne Gorgon at her side. Being traditionally sworn to Hera’s service, the Amazons were entitled to a board seat and shares among the Group.

Delphyne also wanted in on Hera’s plan against her daughter Athena.

(Medusa Gorgon was originally a priestess of Athena. She broke her chastity vow to shag Poseidon right in Athena’s temple. Incensed, Athena cursed the entire Gorgon line to become monsters. Delphyne considered it her familial duty to break this curse by slaying Athena.)

Delphyne and a contingent of Amazons were present. But though they were manifestly outmuscled, the Queen of Amazonia had prepared for this.

She had struck a deal with Hephaistos, who forged her a Corinthian-style helmet. This powerful artefact endowed Delphyne with the full gaze of Medusa Gorgon. She thus petrified Athena in revenge for her people’s curse.

With Athena destroyed, Gorgon’s curse ended. In her mind, not being a monster anymore meant that she now could love Amadeus. Presumably after abdicatingRenouncing to rule as a royal. and leaving the Amazons.

However, she had to finish honouring her deal with Hephaestus. 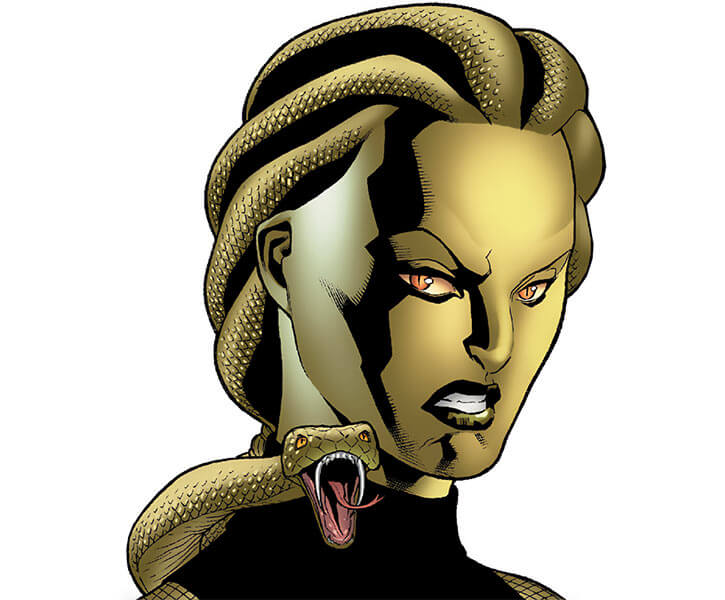 Delphyne delivered the petrified Athena to Hephaestus. She thus learned that the smith intended to build an automaton in Athena’s exact likeness to serve as his, err, companion.

This creeped Delphyne out. By the time Hercules and Cho burst in, Gorgon was holding Hephaestus at gunpoint to prevent him from degrading her sworn enemy.

Zeus and Hera were then slain by Typhon. This meant that Zeus’ thunderbolt flew to Athena’s hand, de-petrifying her as she inherited it. This also restored her curse on the Gorgons.

Now the skymother, Athena stripped Delphyne of her throne. She then sentenced Ms. Gorgon to perpetual imprisonment under Mount Olympus.

Athena took over the Olympus Group. Since she had covertly murdered Hercules, Amadeus Cho was now her champion. She made him CEO of the Group.

Part of the basement (the “New Tartarus” prison) was turned into a solitary confinement unit holding Delphyne.

Though Cho still wanted to confide in her, Gorgon refused to talk to Athena’s champion. 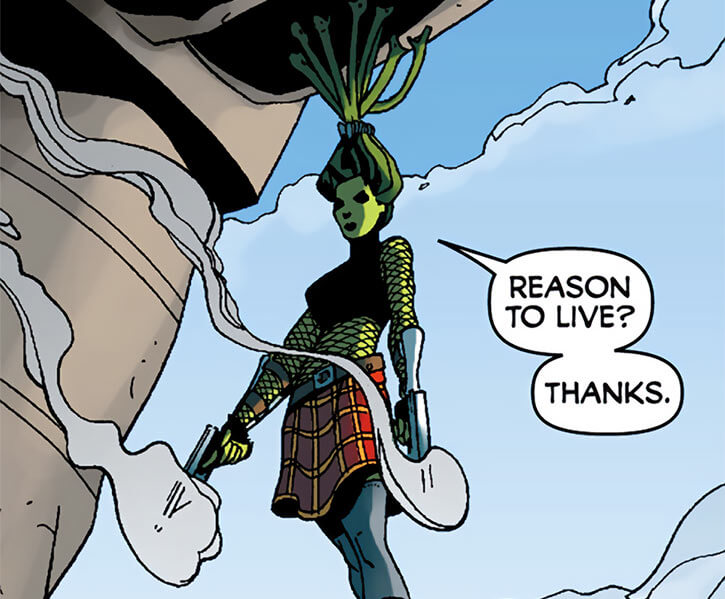 The trickster Vali Halfling, son of Loki, soon took over the Olympus Group. He brought down the entire pantheon by stealing the Ambrosia and extinguishing the Promethean Flame.

His Pantheon troops took over the New Olympus building, imprisoning the fallen gods and mythicalsGeneral name for fantastic creatures described in ancient mythologies, like unicorns or centaurs in New Tartarus.

However, Delphyne Gorgon escaped in the commotion. Pantheon troops intercepted her, but she massacred them.

… and she of the wide sea

Since the security was too tight, Delphyne was forced to ally with the imprisoned Athena to navigate her way out.

Atalanta of the Pantheon intercepted her, but Gorgon narrowly defeated her. She then used Atalanta’s bow to shoot Halfling through the chest.

As Gorgon defended him, Cho then executed a magical ritual granting him omniscience.

Amadeus used this power to undo the damage caused by Vali Halfling, then brought Hercules back. He transferred his new divine power to the Greek, as Cho knew that he wasn’t worthy to hold it any longer.

However, this occurred just in time for Hercules to sense the return of Amatsu-Mikaboshi. The deity was attempting to return the universe to primordial chaos. A state where everything would be Mikaboshi, the Chaos King.

Mikaboshi had already accumulated immense power, including Nightmare’s. He used this to plunge all mortals, including Delphyne, into a deep sleep. Only the gods and the dead could now oppose him.

At the end of the Chaos War, Amadeus Cho tricked the Chaos King into taking over a small, empty universe rather than the Marvel Universe.

Hercules then sacrificed his semi-omnipotence and his divine nature. This undid the immense, universe-wide damage the Chaos King had wrought.

Delphyne and Amadeus intended to have a relationship. However, that apparently disintegrated within months.

Return of the Queen

In 2013, the original Queen of the Amazons — Hippolyta — was resurrected by a cartel of gods. One of her labours was to reunite the Amazons, plus suitable allies.

Delphyne was among those who joined this New Amazonia. Presumably, she became one of Hippolyta’s generals. 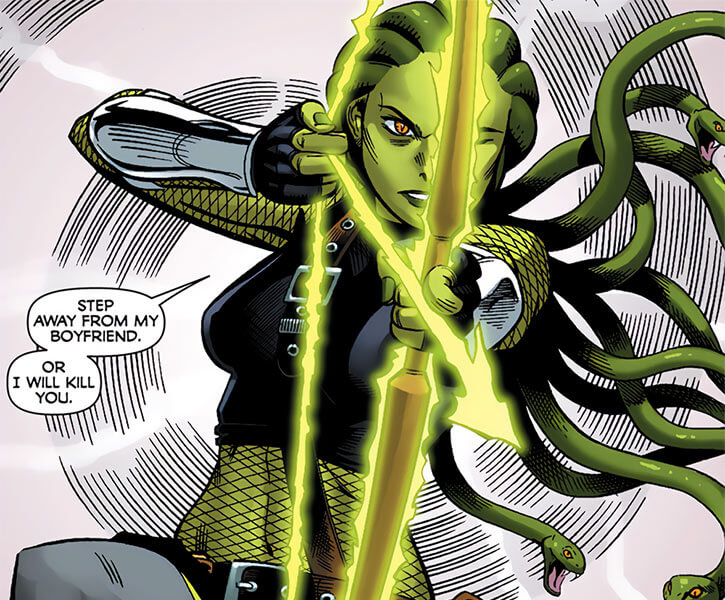 I’ve used Little Simz lyrics in the Powers & Abilities section and now I have Venom hopelessly stuck in me head. It’s appropriate for Gorgon, I reckon.

Her height compared to Amadeus’ isn’t coherent – they keep switching as to who is taller by an inch or so. Here I’m sticking with the first panels, where she’s the shorter one.

Amazons tend to dress like a band of trashy sophomores on a torrid Californian Spring Break day, after a half-dozen beers. But they’ll usually add a Spartan-like detail – often a war helmet.

When not in combat, she’ll usually keep her snakes in a low ponytail, using a bobble or scrunchie.

They’re usually at rest, though they occasionally look around, writhe, rise, etc..

In her human form Delphyne has long wavy red hair, green eyes and a pale skin. Some of her distinctive features remain (such as the upturned eyes and the abnormally flat nose), but they simply read as exotic. 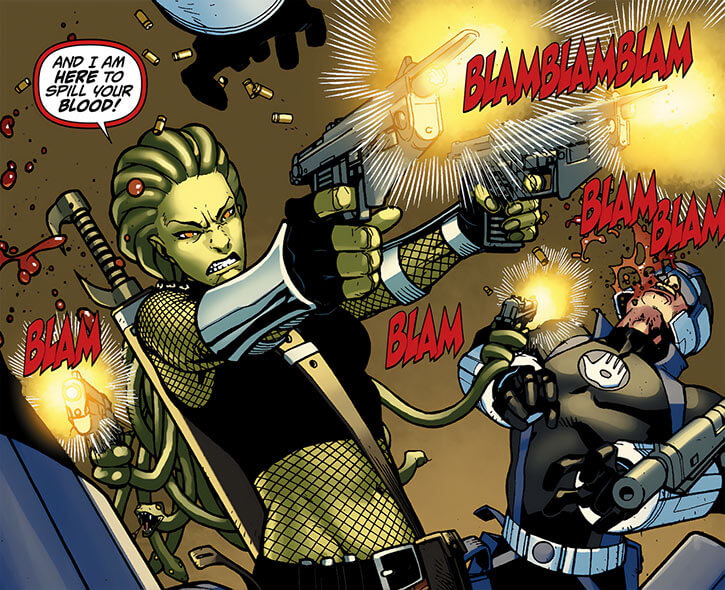 Delphyne is a focused, brave, articulate, disciplined, duty-bound young military officer. She’s big on her responsibilities and the crude Amazon code of honour.

One Amazon tradition Delphyne upholds is that a woman should avoid violence against another woman. This is presumably to keep Amazons from killing each other.

Killing one’s children is also a big no-no, as per Ancient Greek tradition. The whole “kindly ones” thing.

The code further includes defending womankind against degradation and abuse. One gets the impression that few Amazons take that part seriously, but the principled Delphyne clearly does.

She also takes issue with totalitarianism, lies and cruelty.

Ms. Gorgon bitterly resents Athena for having turned her kin into monsters. This is a deep-seated trauma. Generations of Gorgons hid in shame, horrified by their own appearance.

This resentment and abashmentA form of shame, of self-consciousness. blind her to the fact that quite a few Humans find her beautiful despite her monstrous traits.

When Athena was restored from petrification, Delphyne’s morale was shattered. She had failed her people, and all her kin would now stay monsters forever.

Delphyne developed a crush on Amadeus Cho within seconds. Originally, she just thought that he was cute. Her real interest came when Cho bragged about his intelligence and knowledge.

Ms. Gorgon is way smarter, better-educated and better-read than the typical boneheaded Amazon. She thus found the company of a genius to be an attractive proposition.

From there they developed a mutual chemistry, though Amadeus is something of a dweeb and immature blowhard.

Albeit she generally conducted herself as if in her late 20s, Delphyne behaved toward Amadeus more as if she were 16 – at least early on. Presumably she’s straight, and thus had no romantic experience before meeting Mr. Cho.

But once she decided she loved him, she learned quickly and became the more mature of the pair.

Delphyne is a hard, goals-focused person. But she can be sweet toward Amadeus. If he’s not being irritating. So, not that often.

When briefly seen in New Amazonia, Delphyne seemed a bit distant and weary. She was well aware of the difficulties facing this new tribe, and of the limitations caused by Amazon temper.

The vibe was that she had renounced having a personal life to again shoulder her duty. 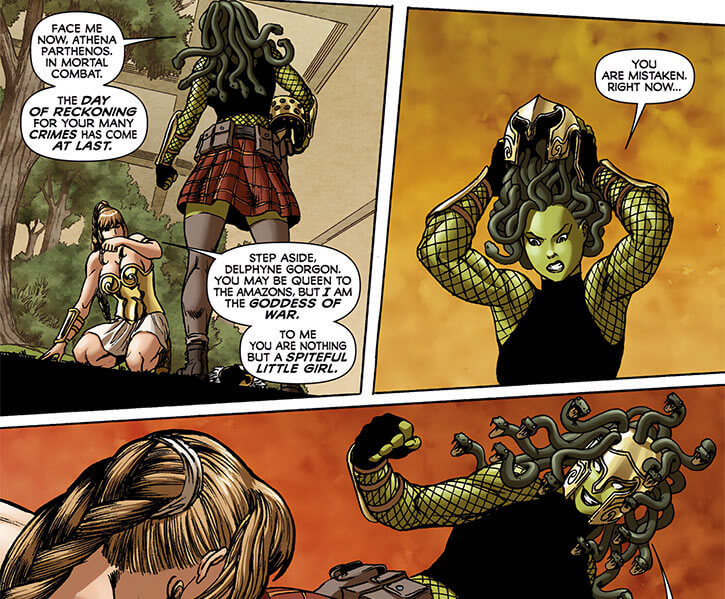 Amadeus Cho (dubiously): “And why do you care [about my fate] ?”
Delphyne (sna(r)kily): “I don’t know. I’ve always had a weakness for small animals and morons.”

“Sisters ! Before you stands a seducer, a rake and a wife-killer ! You know your duty !”

“I am not Greek. I am Amazon. And I have been whetting my sword with mercenary scum like you since before my first period.”

“Make no threat to me, Hera Argeia ! I serve the Olympus Group to strike against a common foe – not to stand idly by while sister raises hand against sister. Or, in worse blasphemy, mother murders daughter !”

“Face me now, Athena Parthenos, in mortal combat. The day of reckoning for your many crimes has come at last.”

Amadeus: “Heh. I just realised. This is our first real date.”
Delphyne (readying her weapons to face an army of Asura demons) (sarcastically): “Then I have tremendous hope for this relationship.”

Delphyne would of course be a Bana-Mighdall Amazon, and have held the Shim’Tar position during several, non-consecutive tours of duty.

Her rebellion came during an awful plan by Circe. This was one of several occasions where she fought as Wonder Woman’s ally, though she refuses to talk to Diana due to her ties with Athena. 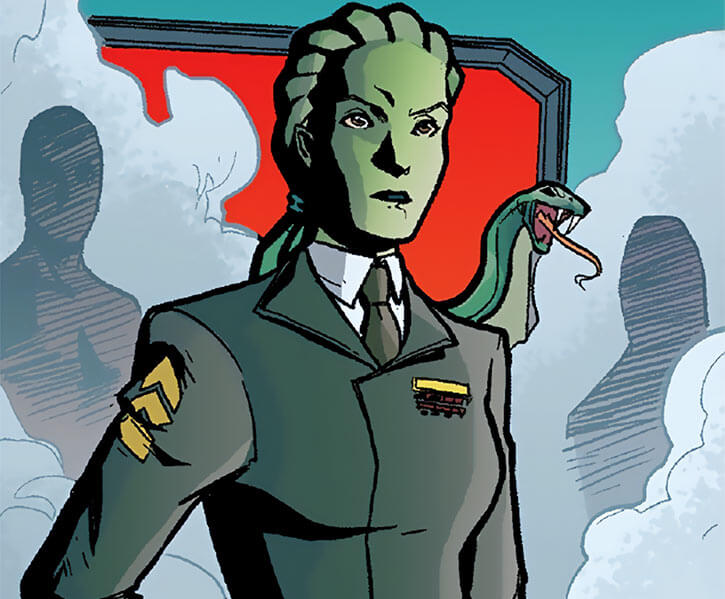 Occultism is limited to Ancient Greek stuff. But I wouldn’t rule out being able to make rolls about other ancient Meditteranean stuff, with a penalty.

Her weapons used standard Weapons Locker stats, though the melee ordnance may have on or two more APs of BODY. The xyphos she used in the alternate reality likely also had an AP or two of Sharpness. 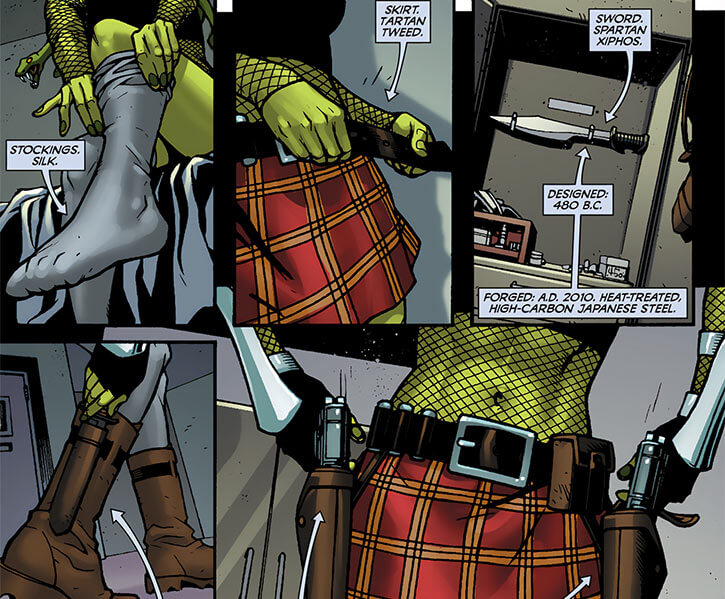 That certain conversations, notably those with Hephaestus, take place in Ancient Greek is my assumption.

Delphyne almost certainly has a Rank Advantage. But we never get a sense of how much (wo)manpower the Amazons have, unit sizes, etc..

It is unclear whether her snakes’ bite “only” blinded Hercules, or blinded him *and* did BODY RAPs. The stats block assumes no damage.

She essentially took Schtick (Paired firearms) twice, and uses four handguns to gain two more APs to put into AV or EV (or one AP in each).

Delphyne doesn’t usually fight like this, since she’s seldom carrying four firearms. But this certainly can come in handy in specific circumstances.

Writeup completed on the 5th of November, 2019.