Marvel Comics’ Delphyne Gorgon was primarily seen during the late 2000s and early 2010s. In Hercules and related books.

Her first name means “from Delphis”. Which is where the ancient Oracle — the Pythia  — made her prophecies.

Delphyne lives in the “cool badass girlfriend” character niche. But she has enough of an arc, background, personal agency and conflicts to exist beyond that. If she ever gets another story.

This profile is a hair *under* our current too-long-for-some-people-to-read-in-one-sitting threshold.

But since I suspect we’ll lower this threshold in the coming months, let’s split Delphyne’s profile in two anyway. Caution’s my middle name.

I tend to assume that all readers are fluent in Ancient Greek mythology, which is kinda daft for a website with global readership. So :

Gorgon seems brawnier than her bulk permits, likely being a bit stronger than Bullseye.

Her physical endurance may also be superhuman, and she seems to have a small healing factorThe power to heal wounds and regrow tissues, like Wolverine.

Thanks to their part-Olympian heritage, she and Artume could withstand the pressure deep under the ocean. This is presumably magical, rather than a cetacean-like physiology.

Gorgon and Artume could also see deep underwater, or in simple darkness. However, they cannot actually breathe water.

Amazons in general seem to have an enhanced lifespan. 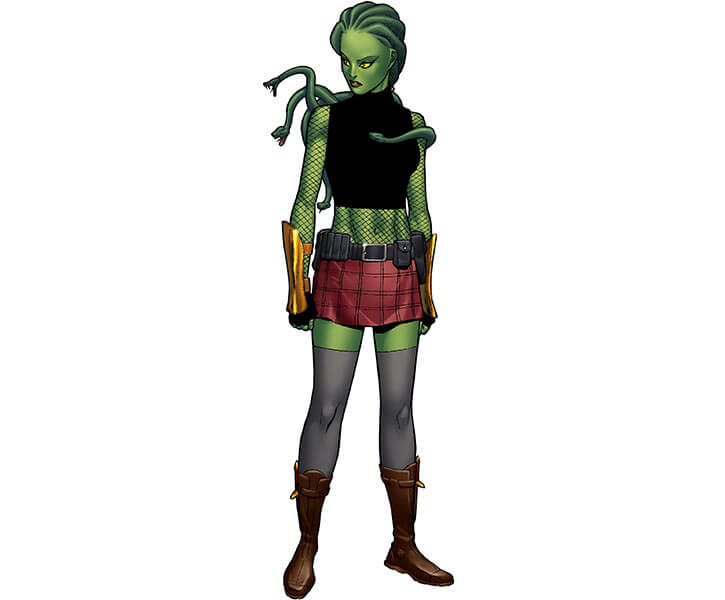 If you comin’ / Come at me directly

Delphyne doesn’t register on infrared sensors. She joked that it was because she’s cold-blooded, but that cannot be the literal truth. We’d assume that some sort of symbolic magic is involved.

Her heart isn’t located where a Human’s is. She could thus survive a seemingly lethal impalement.

A Marvel secondary source  states that she can relocate her heart. But the witnessed incident suggests that it isn’t a reactive, “dodging” thing. It’s likely a slow process where a Gorgon chooses to “hide” her heart elsewhere in her body, and gradually moves it there.

(Since Delphyne logically has a Human-like circulatory system, this process may take years as her coronary arteries adjust to successive small displacements.)

They will never wanna admit…

She is highly intelligent, and — unlike most Amazons — well-educated. Furthermore :

In melee, she seemed on par with Bullseye, but outmatched by Hercules. Though one notes that her tactic against Hercules (a 300-style flying spear rush) was actually a feint to get into face-biting range. 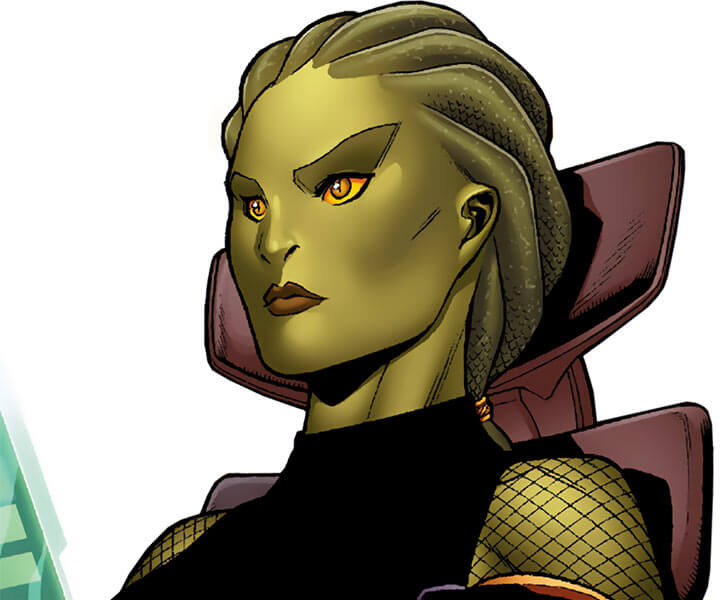 She is also a trained pilot, somehow familiar with Atlantean vehicles.

And a trained acrobat and climber.

She’s trained and experienced as a military leader for notoriously undisciplined troops.

Other military skills include first aid, and a knowledge of mythological weaponry.

In another reality she was a high-ranking general in a major nation, then a kindergarten teacher. Since she retains her memories of this reality, she likely retains those skills.

I assume you’ll be comin’ for blood…

Ms. Gorgon’s hair is an additional set of limbs. In a pinch, the snakes can hold one or two small objects (like a pistol) and operate them with limited dexterity.

If they can all bite into a nearby surface, they can also support her weight.

Their eyes are functional, though I *think* Delphyne was closing her main eyes when she switched to two pairs of snake eyes. She never demonstrated stunts such as 360° vision.

… that makes two of us

The snakes can also bite somebody she’s in contact with. The venom from her tresses could blind even the demigod Hercules, Prince of Power, within seconds.

Hercules’ sight was restored by the Royal Atlantean physician. This required a salve extracted from “saprophytes  crawling through our sacred benthic  forests”. One suspects that these organisms are used in Poseidon-aspected rituals, making them efficient at neutralising Greek divine stuff.

But it is also possible that they simply are really good at eating venom.

At most times, Delphyne will have :

Additional armament will be selected based on the situation. Past ordnance has included :

The gear she had when escaping the Olympus Group included :

(Had I been writing she’d obviously have quad-wielded a Colt Python, a Colt Anaconda, a Colt Cobra and a Colt Diamondback. But alas, my creative genius remains unrecognized by global mega-corporations !!1!)

The bracers aren’t a major part of her fighting style. She doesn’t run around blocking stuff with her forearms à la Wonder Woman. If she has to parry, say, an arrow she’ll use a melee weapon. 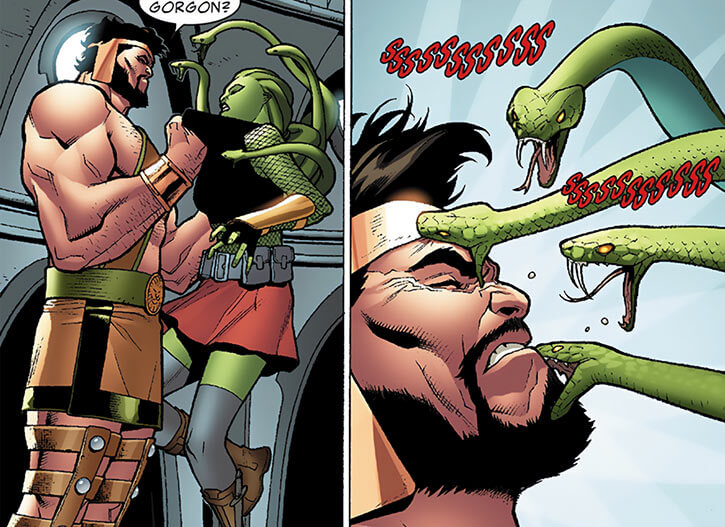 Daughters of war – the Amazons

In the Marvel Universe, these Ancient warrior women are descended from Ares (Ancient Greek god of war) and Otrera (nature unclear in this version of the myth). Their kids were Antiope, Hippolyta, Penthesilea and perhaps others.

An all-women tribe with a superhuman lifespan, they reproduce every 100 year or so using captives. These are then put to death.

Being descended from Ares they like war, explosions, battle, guns, swords, fighting to the death and being cranky. Historically, they have worked as mercenaries for many… strange parties.

One devastating engagement took place during the reign of Amazon Queen Myrina. Decadent pre-Cataclysm Atlantis hired them to destroy a nest of Gorgon warriors. The Amazons won, and their captives joined their tribe.

In the flashback panels, these Gorgons have a giant snake body with the upper torso, arms and head of a woman (plus snake hair). Since some Amazon soldiers have been petrified, it stands to reason that these Gorgons are descended from Medusa Gorgon.

Delphyne’s ancestry likely lies with Gorgons with a more human body, descendants from either of Medusa’ sisters. But these aren’t seen in this scene.

This battle took place not long before the Cataclysm. From there : 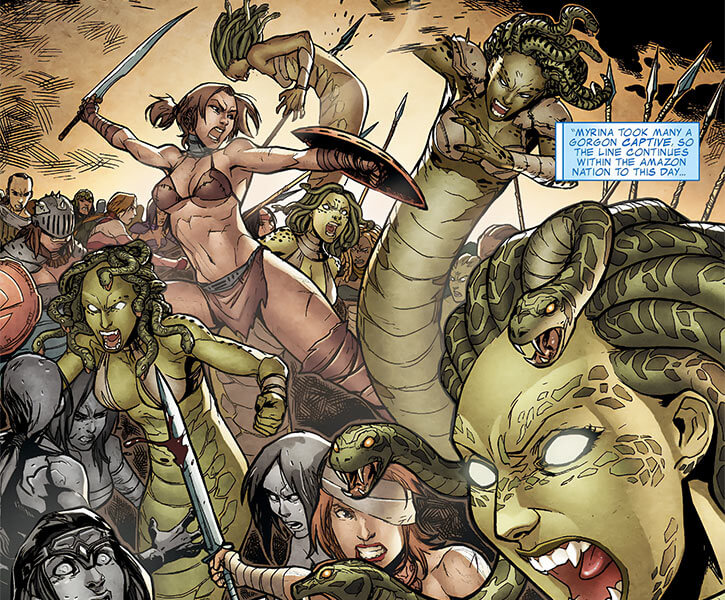 From there she was detailed as the shieldmaiden of Hippolyta’s daughter, Artume. Apparently, in Amazon society, a shieldmaiden symbolically becomes the daughter of her principal.

Much like Wonder Woman (Diana of Themyscira), Artume had been created from stone – then turned to flesh using inverted Gorgon magic. However, Artume’s heart was still made of stone. This made her evil, cruel, militaristic and power-hungry.

In 2006, the armies of evil Japanese deity Amatsu-Mikaboshi stormed the realms of the other pantheons of Earth, including Olympus. Delphyne fought at Artume’s side.

The fighting was exceptionally brutal, and Olympus was left in ruins. Yet the Amazons fared much better than, say, the Myrmidons.

Relishing in the carnage, Artume began plotting. She wished to :

Delphyne continued to serve Artume during her bloody rebellion. She helped in :

Delphyne was also instrumental in taking down the responding Hercules. She blinded him with her snakes’ venom.

(No other Gorgon is seen among the Amazons. It is likely that Delphyne is the last of her kind – perhaps the others perished in 2006. But she clearly stated that there were other, non-Amazon Gorgons in the world.)

Curse your sudden but inevitable betrayal !

However, Delphyne had a crush on Amadeus. They made out in his cell.

But Artume saw this on a surveillance camera feed.

Delphyne then assisted Artume in recovering the Omphalos, a mythical artefact needed for the next part of Artume’s plan. However, Artume shot Gorgon from behind and through the heart, for fraternising with Cho.

Ms. Gorgon survived – her heart wasn’t where Artume assumed it was. She : 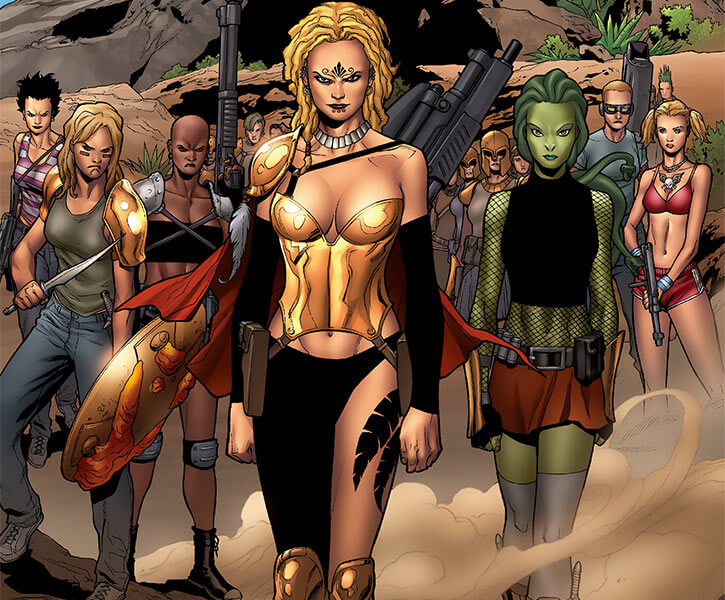 A step behind Artume.

Fury of the Gorgon

Cho and Gorgon’s plan nearly worked. Yet Artume narrowly completed her ritual to have the Omphalos rewrite reality.

Artume now ruled much of Earth.

In this new society, Delphyne had remained Artume’s greatest general, defeating their great foe Namora. She also had been in a relationship with Amadeus Cho, a high-ranking house slave and advisor.

However, Delphyne had then stepped down to become a kindergarten teacher.

This was a ruse. General Gorgon had been working against Artume while teaching. She freed a captive Hercules. She also convinced the Avengers (Laura Kinney, Susan Storm, and a woman in a Spider-Girl costume who may have been Mary-Jane Watson) to side with her.

Then she defied Artume in a public duel.

However nearby persons, including Amazon squaddies, remembered what had happened. As far as they were concerned, Delphyne Gorgon was now Queen of Amazonia by right of combat.

Though Delphyne still had an interest in Amadeus, she walked away.

As Queen, she was now responsible for upholding Amazon traditions. Which included slaying men after coitus, making their relationship impossible.

Or at least real brief.

This article continues in its second half !

Writeup completed on the 5th of November, 2019.