Demitrius and his pal Slasher appeared in a bizarre 1971 Marvel Comics crossover story.

This was an even stranger beast back then. Crossovers had been a thing since the 1940s, of course, but the age of the numerous crossover events was still many years away.

For the full context about these events, you should first read the character profile for Mister Kline the Assassin.

Though the material is deliberately unclear on that point, we’ll assume that Demitrius was a sophisticated robot.

In his normal form, Demitrius has paranormal perceptions. He also seems to be a bit of an acrobat (the art in that panel isn’t clear). But otherwise, he’s useless.

Demitrius’ paranormal perceptions seemed to result from strange, highly experimental technology. They hindered him more than they helped. He often sensed relevant information, but it was way too vague and confusing to be actually useful.

After “the Change”, Demitrius became a giant. Two large bumps appeared on his forehead – from which long stalks with crab-like pincers emerged.

His strength greatly increased. He could also project powerful beams of pseudo-heat – or erect force shields. 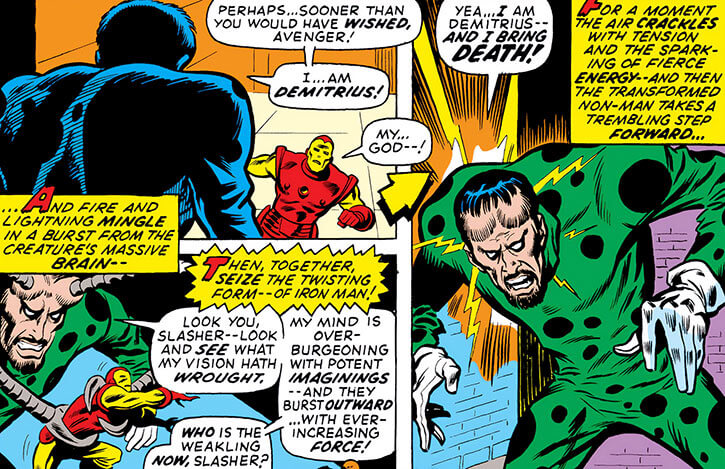 Slasher and Demitrius were two (presumably robotic) agents of Mr. Kline, aka the Assassin.

They worked to ruin industrialist Tony Stark’s reputation, so the future from whence the Assassin came would never come to pass. Another target was the head of United Skyrise Incorporated (USI), Mr. Crandal.

Slasher and Demitrius covertly set up a sonic cannon to tracelessly collapse a building built by USI, so the company would be blamed. But Iron Man intervened, saving scores of lives.

What happened to the two operatives after their defeat is unrevealed. 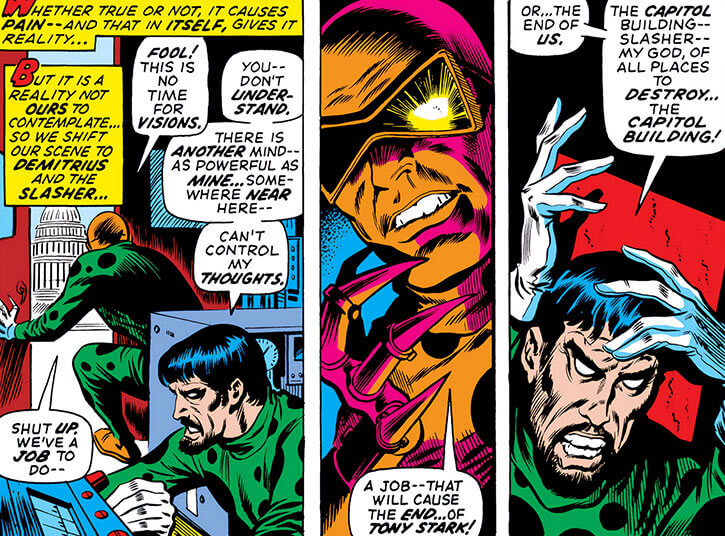 Demitrius comes across as a ranting paranoid. He’s constantly in the grip of vague visions of doom.

He seems to be quite loyal toward Mr. Kline, and perhaps even scared of him.

The Slasher hates him and keeps verbally abusing him. Demitrius hates him in return and ceaselessly rants about it (and his visions, of course). But they have a job to do for their master.

“Slasher… we must hurry. Mister Kline gave us specific orders… it is time.”

“You — don’t understand. There is another mind — as powerful as mine… somewhere near here — Can’t control my thoughts.”

All PLs assume the giant form, since he’s otherwise nigh useless.