The Demons are experienced combatants who fly and breathe fire.

They also can combine to form a genuine Chinese-style dragon.

These demons are called “Vortex” demons since they were seen after having escaped their home dimension through the Vortex. Whether they normally exist within the Vortex or just used it as a gate to Earth is unrevealed. 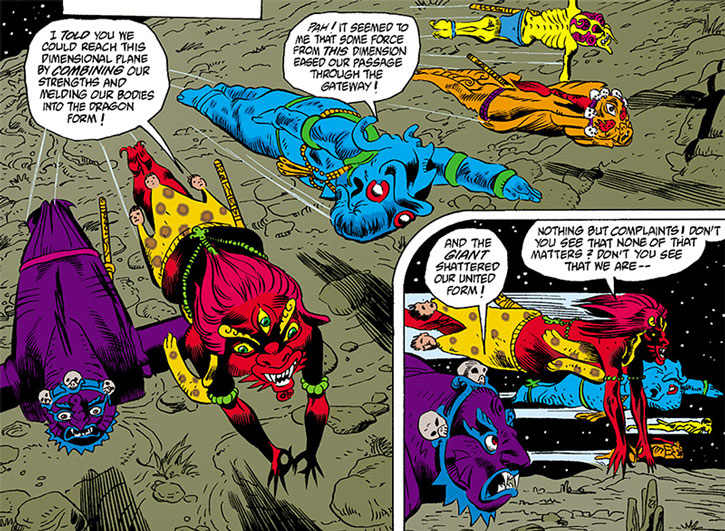 In 1993, Seekers from the Reaver Swarm found the Vortex. Their probing beams allowed five waiting demons, in dragon form, to reach Earth and fly away across the Nevada desert. Their apparent intention was to establish some form of power base on Earth.

However, the armoured giant Hero Zero rushed to intercept them. He shattered the dragon into its component individuals, but the five demons escaped.

Their troubles had only begun, however. Expatriate Tibetan mystic King Tiger was waiting for them, and magically trapped them in a small area of the desert. He managed to kill two of them before they could escape.

Threatening goons who have only contempt for humans.

“There will be more of us in time – and we will feast on your pain !”

Advantages:
Misc.: Can join four other Vortex demons with this Advantage to form a Dragon (10 pts).

The five Vortex demons combined their bodies to form a large Chinese-style dragon. The stats of the Dragon are :

Advantages:
When the Dragon is reduced to a BODY of 00, it is not dead. It shatters into its components Demons, who have a full BODY Current Condition. The Demons cannot reform the Dragon until the next nightfall.