This Jekyll & Hyde rip-off was seen in a substandard Werewolf by Night three-issue storyline in 1974-75.

Then everyone tried to forget about him. And this is where I come in, strike a dramatic pose with me opera cloak, and say – “not so fast, mate”.

DePrayve’s strength, aggression and endurance have been increased to peak human levels, give or take. This allows him to go toe-to-toe in a brawl with the Werewolf by Night – who by 1975 was starting to get more powerful.

His muscle mass and speed are also increased, but less aggressively than the rest.

It sometimes looks like he’s taller as DePrayve, but it’s far from clear.

As Redditch he’s a competent behavioral psychologist and neurochemist. He’s also a beefy, tall-ish (for the 1970s) man. DePrayve likely possesses Redditch’s intellectual skills, but he doesn’t seem interested in using them.

How long the serum stays active within Redditch’s body is unclear. Perhaps it is permanent, and he’ll turn into DePrayve again if he’s in another life-or-death situation.

Winston Redditch was a behavioral psychologist, though he seemed to also have a background in biochemistry and/or neurology. He came up with the theory that it was possible to chemically stimulate or depress specific areas of the brain controlling aggression or empathy.

This research was widely reported using comparisons with R.L. Stevenson’s Doctor Jekyll and Mister Hyde. As presented by journalists, Redditch would be able to increase or decrease bestial evil or humane good within a person.

By 1974, Redditch was perfecting batches of serum in the basement lab of his Pasadena house.

Among those reading about his work was Buck Cowan. Buck thought that such a serum could cure his friend Jack Russell of his lycanthropy.

As Mrs. Redditch was valiantly attempting to clean up her husband’s lab, she made a random remark. It triggered a brainwave in Mr. Redditch, who cooked up a catalyst and decided to immediately experiment on himself.

However, while dusting the unlabelled beakers, Mrs. Redditch had inadvertently switched the aggression inhibitor serum and the aggression stimulator serum. Thus, Redditch soon turned into a creature reminiscent of the “Mister Hyde” aspect of Dr. Calvin Zabo.

(There may be common ground between Zabo’s research and Redditch’s. Mister Hyde first appeared more than 10 years prior, so Redditch may have been exploiting Zabo notes confiscated by the police. It is also possible that there’s common ground with the red and/or white capsules used by Nuke or the British Super-Soldiers.)

The evil strongman who emerged called himself DePrayve. On his way out he punched unconscious Mrs. Redditch, Buck Cowan and Jack Russell. But the night soon fell, and Russell revived as he turned into the Werewolf by Night.

Travels with a donkey in the Cevennes

The lycanthrope soon caught up with DePrayve and attacked. The brawl devastated a supermarket before the police could come in. Both creatures fled, though the cop briefly caught the Werewolf. 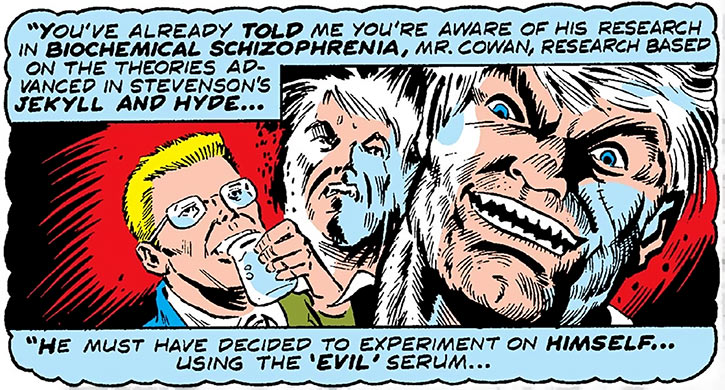 Freeing himself, the lycantrope ran after DePrayve. He found the brogdiganian brute as he was assaulting young lovers, and re-engaged. As the malevolent mutual mauling of monsters was maintained, DePrayve became Redditch again.

The horrified and confused scientist was slammed hard into a car by his opponent. However, the police came in and got Redditch to an hospital in time.

Albeit in critical condition, the beefy Redditch recovered quite well. This is when he was visited by Russell and Cowan, who explained Russell’s werewolf problem. Redditch agreed to let them get some of his serum to experiment with pacifying the Werewolf by Night. Part of Redditch’s motivation was to study the werewolf to advance his research.

Russell did try the serum. It was efficient for about ten minutes, but then the transmogrification  took place anyway.

A child’s garden of verses

However, deranged vigilante the Hangman (Harlan Krueger) had been after Redditch. He kidnapped him from the hospital, and brought the unconscious researcher to his hideout. The Hangman intended to kill Redditch once he’d awoken. But in the meanwhile, the Werewolf tracked them both down.

As the lycanthrope attacked the vigilante, Redditch woke up. Despite a brief attempt at resisting, he became DePrayve and the fight turned into a three-way brawl. The Hangman didn’t fare well, and the Werewolf eventually clawed open DePrayve’s face. Blinded by blood, DePrayve fled.

Hours later he reverted to being Redditch. Passerbies called an ambulance for him. Redditch swore off his serum.

Since he was never seen again, it is possible that he did not turn into DePrayve a third time.

DePrayve looks like a furious caveman. He has thick eyebrows, somewhat pointed teeth, bloodshot eyes and a lot of muscle and body hair. Furthermore, the hair on his head becomes markedly paler and thicker.

Due to his increased muscle mass and violent physical activities, DePrayve will gradually shred Redditch’s clothes. He remains fully clothed, but everything will soon be in tatters.

Redditch often wears a lab coat, since he works with chemicals.

Redditch is an uncaring, somewhat overbearing bloke. He’s focused on his research and readily ignores such piffles as his marriage, workspace organisation or common sense. On the other hand he has a scientist’s curiosity and open mind, though even there he’ll keep a selfish eye on how new facts can advance his research.

DePrayve “exults in evil”. So he’s close to a rampaging little boy with zero impulses control and a feeling of utter impunity (though he knows that gunfire could hurt him).

“Redditch is dead ! And I killed him ! Now it’s DePrayve’s turn to live… to exult in the richness of evil !”

“A monster which seeks to stop me ! To stop evil -?! Your attack is unexpected, but it won’t stop me ! DePrayve can’t be stopped ! DePrayve is evil !!”

(Yelling at a random girl’s boyfriend as he mauls him) “You don’t deserve the girl !! Only evil is strong enough to claim pleasure !”

Bonuses and Limitations:
Growth is Always and Already Factored In.

Connections:
None. Evil means never having to say hello. 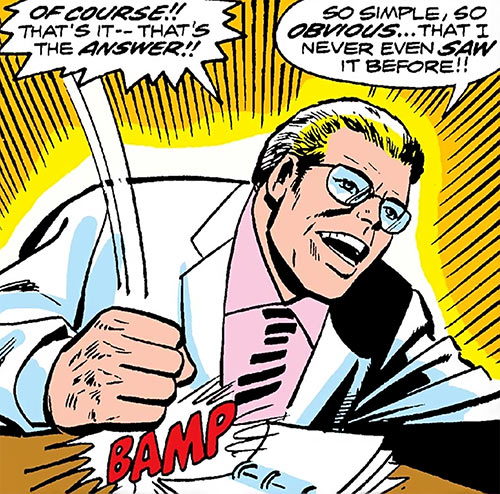 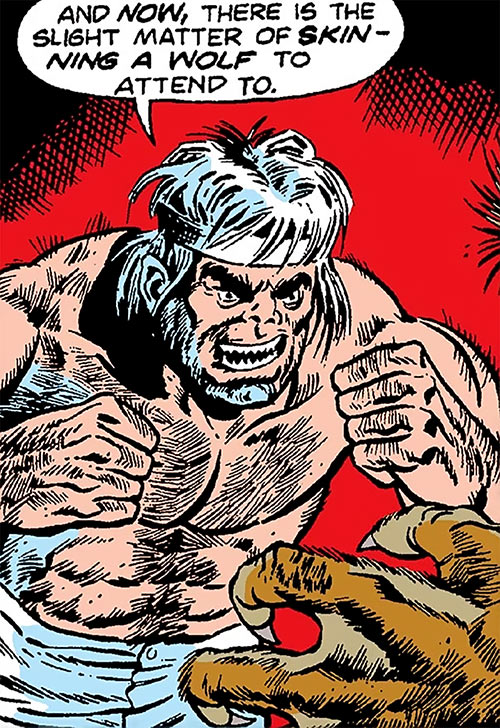