Calvin & Hobbes was a 1985-95 comic strip by Bill Watterson. Its protagonist Calvin is a little American boy with a particularly active imagination and a tiger plushie/imaginary friend called Hobbes. One of the “adventures” therein was imagining that snowmen were rebelling.

Calvin & Hobbes likely is the most beloved and critically acclaimed comic strip from this era.

Basically big thugs with above average strength and below average intelligence and speed, except where reproduction is concerned. Think the original Hulk, only dumber.

In January 1990, Calvin invoked the power of the “mighty and awful snow demons” to bring one of his snowmen to life. Unfortunately, he didn’t realize that the creature would become a monster bent on destroying its creator.

Calvin and Hobbes tried throwing snowballs at it. But that only gave it the bright idea to pack more snow on itself to make itself bigger. Not to mention construct a second head for itself.

Once out of Calvin’s sight, the Snow Goon constructed and animated more Snow Goons. These in turn made more, totalling 15 by the time Calvin’s parents called him in for bed that night.

Realizing the Snow Goons would never let Calvin live to reach school the next day, Calvin and Hobbes snuck out of the house at 2AM. They used the garden hose to coat the Snow Goons with water. The cold weather would turn it to ice, immobilizing the monsters.

The noise brought Calvin’s parents out. Calvin blasted his dad with the hose as well, hoping to evade him. Finally, then Calvin was dragged in, he told his parents all about the Snow Goons, but they refused to believe him.

The one lesson Calvin learned from all this: “Snow Goons are bad news.”

Murderous lunatics with a zombie mentality.

It’s possible one might have escaped and made it to the Fortress of Solitude and found armaments there. If so, he could create a true army of Snow Goons and attempt world domination. 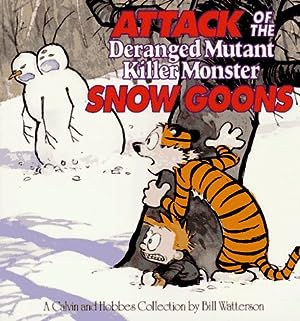