Along with her love, Saied, Nema was subject of the process the Quraci government had developed for empowering operatives with metahuman abilities. She may well have been subject to the same process which empowered Jaculi I and Jaculi II.

She didn’t see much action before Qurac was nuked by Cheshire. But she was among the Jihadi members who escaped, blaming America for the attack.

On board a flight to America, they found they shared it with the (currently fugitive) Outsiders. Their mystic members recognised each other’s nature. The situation inevitably escalated into a fight while in midair, which the Jihad ultimately lost.

Dervish found herself in custody, uncertain what had happened to Saied (a.k.a. Manticore III).

Dervish was imprisoned in the same place as some of the Outsiders. When a riot gave them the chance to escape, she helped them against some of the super-villains they had to get through. She then offered to assist them in their mission if they’d help reunite her with Saied. The Outsiders were reluctant, but Wylde supported her. They let her accompany them.

She helped them fight the vampires who’d framed them. But afterwards Wylde revealed to her that Manticore had apparently died fighting him, falling into one of the plane’s engines. Betrayed, she stormed off.

She was soon seen as a member of Strike Force Kobra, again coming into conflict with the Outsiders. The Strike Force was beaten, and she probably ended up back in prison, before escaping again for minor roles in others’ stories.

A reluctant terrorist, Dervish nevertheless has a mean streak. Despite her outfit she is fairly strict in her beliefs (disapproving of her lesbian teammates).

Learning of Saied’s death left her lost and without direction, easily recruited by someone who wanted her power.

“‘Dervish.’ ‘Manticore.’ I hate these names the Jihad has given us, Saied ! I can’t wait for the day their goal is accomplished, and you’ll be made a whole man again !”

“Who you are is unimportant. You are an obstacle to our cause. And I eliminate obstacles !”

Bonuses and Limitations:
Air Control is Contingent Upon Superspeed (-1).

Equipment:
As a member of Strike Force Kobra she used a short staff as a weapon [BODY 04, Enhance (EV): 01 (cap is 06), Descriptor: Bludgeoning]. 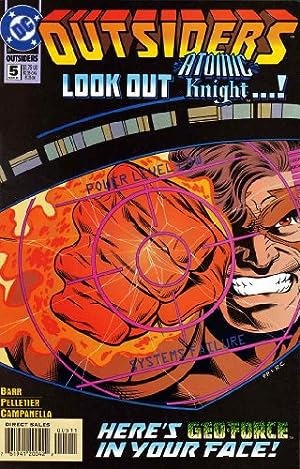