Keene Marlow’s body has been chemically augmented to the point. As a consequence, it performs at levels far greater than a mortal man. He is inhumanly strong and resistant to damage. Bullets reflect off of his skull. He’s capable of jamming a rifle completely through the body of an armoured man.

His reflexes, while not superhuman, are the equivalent of an olympic level athlete. And he has the agility to match. Though Keene is nearly 100 years old, to the naked eye, he appears to be in his 60s. And he retains the vitality of a man in his early 40s.

Keene can heal from wounds at a heightened rate and seems unkillable. As it stands, he has survived three severe heart attacks and each time has made a complete recovery.

Keene has had serious military training, and as such is proficient in several combat disciplines. Hand to hand, he’s a monster. He is equally competent with weapons, but chooses not to use them.

In addition, Keene’s decades of experience as an investigative journalist have made him a accomplished detective.

Back then, he was an investigative journalist dedicated to reporting on Nazi atrocities. His dramatic and brutally honest reporting of the situation resulted in his capture and imprisonment in a concentration camp. It was there where Keene met the man who would change his life forever, Professor Eric Schmitt.

Professor Schmitt was an anti-Nazi German scientist who had discovered a serum that would transform an ordinary man into a “Super Soldier”. When he refused to share his formula with the Nazi regime, they imprisoned and tortured him. They eventually left him to die in the same camp that Keene ended up in.

The two became fast friends and to Keene’s surprise, Professor Schmitt gave him a secret vial of his “super soldier serum”. How the professor secreted the formula into the camp and why he chose to give it to Keene instead of taking it himself is unrevealed. But its affects were immediate.

Upon swallowing the serum, Keene found his body transformed into a prime human specimen. He overflowed with boundless energy and strength. The two concocted an escape plan. Unfortunately, Professor Schmitt was killed during the attempt.

Enraged, Keene used his new found power to destroy the camp and the Nazis who ran it. His taste for vengeance was not satiated with this act though. Keene needed more. His sense of justice demanded that he did more.

Keene went briefly underground, and when he reappeared, he was cloaked in the fearsome costume of the Destroyer. Keene wrought havoc throughout Nazi Germany and all of Europe, smashing any Nazis that dared to cross his path.

Upon the end of the war, Marlow returned to America. There he immediately began working for the American military, dealing with many threats against the US.

As the years passed, Keene started and raised a family. He married his lover Harriet. They had a daughter named Felecia.

Felecia married Keene’s sidekick Turret. He was a young Black man named Darius, who had somehow been exposed to the same serum that had augmented Keene all those years past. This took place after Turret promised Keene to retire from adventuring to spare Felecia the worries that Harriet endured over the years.

During this era, the Destroyer racked up numerous wins over many many foes. He fought and imprisoned men like:

But perhaps the most frightening of his foes the “Scar”. Keene’s battles with Scar became the most personal.

Sometime during their long rivalry, Scar discovered Keene’s secret identity. As his veangeance, he maimed Harriet by removing her right arm at the shoulder. After this horrific act, Scar vanished for decades.

Keene had lived far longer than any mortal man had a right to, when he suffered his first heart attack. It wasn’t much longer after that when he experienced his second. His doctor told him that there was nothing anyone could do, and that he should make his peace with God while he had a chance.

Keene thought it over. With him gone, there would be no one left to fight the bad guys. So he made a decision, he would kill them all before he went.

The Destroyer went on a sanctioned rampage killing his old foes. He tore a path through the new and improved Horde, all the while struggling against his failing heart. But the one foe that he really wanted to kill was Scar. 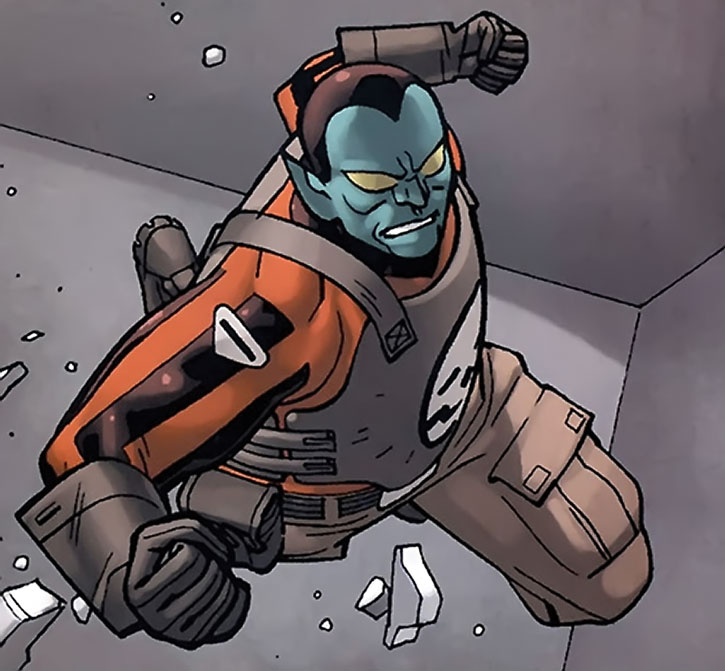 His inquiries eventually drew his old foe out of hiding. Unfortunately, it almost cost his daughter and her family their lives. Scar destroyed their home and kidnapped Felecia, forcing the Destroyer to come to him. The one thing he didn’t count on, was Felecia’s husband coming out of retirement.

With Turret at his side again, Keene finally had his vengeance on Scar. Before savagely beating him to death, Keene severed Scar’s left arm and shoved it completely down his throat. Scar had taunted Keene by telling him that he actually ate Harriet’s arm before the beating.

The Destroyer and Turret had one final adventure together against the remainder of the Horde. The two faced soldiers, baboon-like ape men and finally Krakoom, the massive demonic leader of Horde. Despite a valiant effort, Keene was disabled during the battle, but Turret ended up killing Krakoom.

At this point, Keene had to face reality, he was old and worse, he might have cost the world the best hero it would ever know. He felt severe guilt at forcing Turret into retirement.

Shortly after that, Keene had another heart attack, while laying in bed next to his wife. It was quick, painful and fatal. When Keene awoke, he found himself standing on a white plane, surrounded by three reapers who awaited to collect his soul.

Being the man that he was, Keene put up a fight… and won. The reapers had threatened to take Harriet unless the Destroyer co-operated. This enraged Keene and he slaughtered the reapers with their own weapons, telling their corpses emphatically, “Next time don’t bring four, BRING TEN!”

Keene returned to life on the floor of his bedroom. Paramedics had been desperately trying to revive him. He brushed them away and let his wife take him to his doctor. The diagnosis was Keene’s heart had healed somewhat. It was still damaged, but it looked like somehow, he bought himself more time.

Before leaving the hospital, Keene saw his government handler walking by. He inquired about his presence there. His handler let Keene know that there was a situation brewing that needed the Destroyer’s touch.

Keene is currently enjoying his quiet retirement, sitting at poolside with his loving wife and drinking the afternoons away.

Keene is a solid looking White male, who appears to be in his late mid to late 60s. His hair has receded and his skin around his face has begun to droop. He has an obvious double chin, and his stomach has a slight paunch.

However, his arms are like corded steel and he moves with a spryness that belies his advanced years.

As the Destroyer, he wears a green skin tight mask with large yellow lenses that hide his eyes. The mask’s features are exaggerated (much like the Green Goblin’s) while the rear is a simple purple skull cap. His torso is covered with skin tight red and black body stocking with dark gloves.

Over the top of the body stocking, he has taken to wearing a black armoured vest that has a simple skull emblazoned in the center of it.

His waist is encircled with a simple utility belt with many pouches on it in order to carry his equipment. To top it off, he wears brown khaki-like pants with thick Army boots.

Keene is a family man. His paramount concern is protecting his family first, and his country second. He feels responsible for those around him and is willing to surrender his own personal happiness in order to keep the innocent from experiencing harm.

As a stark contrast to his actual ideals, Keene is also a sadistic bastard. He seems to experience pleasure in bringing pain to his enemies. Going out of his way to avoid killing his enemies is distressing for him.

Last, but not the least, Keene is the kind of man that never gives up. Nothing will keep him down, not Scar, not Horde, not even death itself will tell him he’s done until he’s good and damn ready.

(While jamming a rifle through the body of one of his opponents) “Let me fill you in on a little secret, son. Guns are for pussies !”

“I’ve decided to take what little time I’ve got left… and spend it tying up all the loose threads. Anyone who’s still out there… who still poses a threat… anyone who could pose a threat after I’m gone.”

“No, Listen Darius… I’m dying. Doctor says my heart’s getting worse…I don’t have much time.”

Turret: “How big was he ?”
Destroyer: “Twenty, maybe 30 stories. I feel bad about the whole thing. I thought he was intelligent — I ripped his tongue out before I realized he was about as smart as a dolphin. Felt like beating a dog…”

“You know that’s not how it is. I love you and Felecia and little Haley more than anything else in the world. This is just what I do, the world needs me — it’s bigger than the two of us.”

“You release her now — I’ll make it quick. I’m not going to lie to you. You’re not leaving here alive no matter what you do.”

Sergeant: “After what you did to Scar. There’s nothing left to do. Jesus man.”
Destroyer: “I was angry.”

Destroyer: “I don’t use guns.”
Scientist: “This is only slightly more of a gun than the atomic bomb was. This weapon will blast straight through 20 men before there’s any degradation in blast intensity. It’s glorious.”
Destroyer: “Hrm… maybe this once.”

“If we were 20 years younger you wouldn’t be getting any sleep tonight.”

“I love you, Harriet Marlow.”

You could replace Agent Liberty with the Destroyer, but I have a feeling that Superman would frown on his methods.

Bonuses and Limitations:
Jumping has catfall bonus, and is for calculating falling damage only.

He’s got a bum ticker

The Destroyer has a severe heart condition, most likely due to the constant stress and abuse his body has endured over the years. This condition makes him vulnerable to excessive exertion.

When he willingly tests his physical stamina, or rolls double 1s on a strength or endurance action, he suffers the equivalent of a 10 APs Cell Rot attack (Last Ditch Defense applies). Result can range from chest pains and shortness of breath forcing him to sit down to immediate hospitalization in a critical state.

All of Keene’s physical stats and powers had +1AP in his prime. 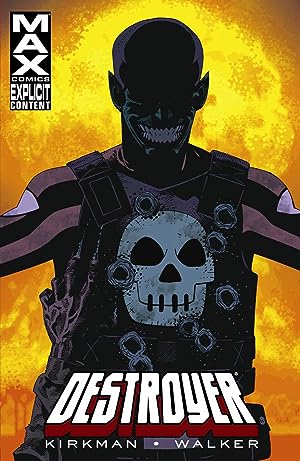 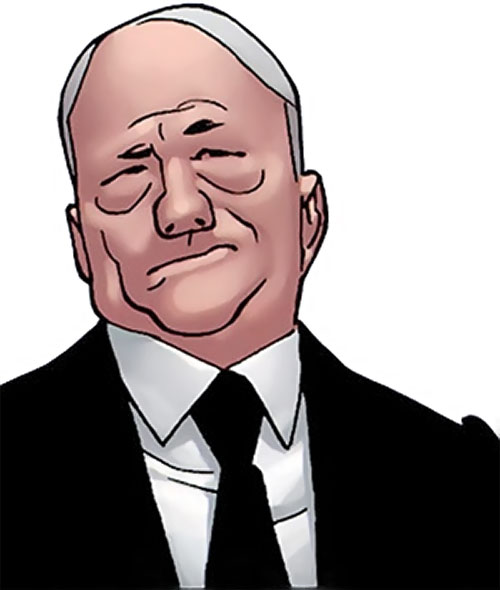 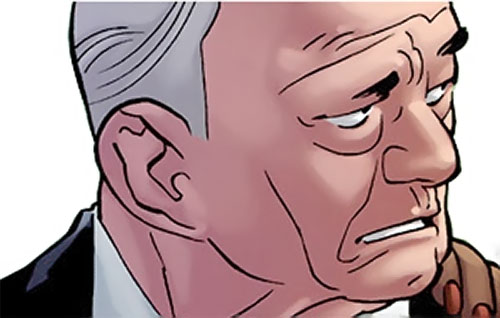