The android called Destruction is superhumanly strong (it can presumably lift about a ton), and is an incredible fighter. It could engage both Captain America (Steve Rogers) and the Black Panther (T’Challa) and consistently hit them.

It was also remarkably durable. Destruction ignored blows from its opponents and even an explosive projectile from Agent 13 (Sharon Carter)’s gun.

However, it could be instantly taken down by yanking two easily visible control studs built into its body.

This android was encountered in 1968. It was used as a weapon by a man falsely claiming to be Baron Heinrich Zemo. 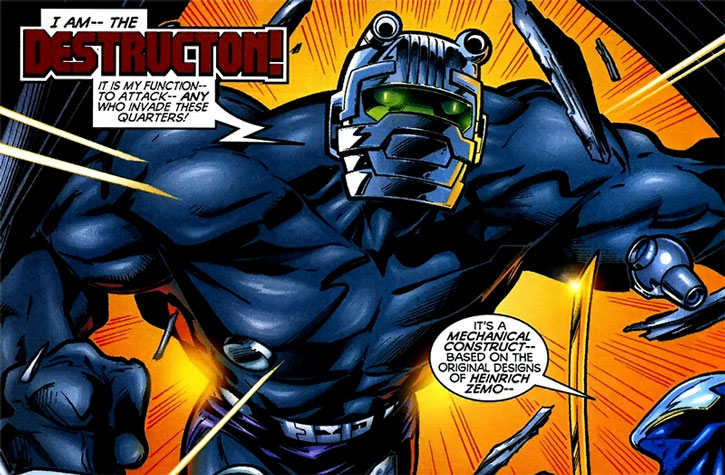 Presumably, it had been built during the 1940s by Zemo and put in storage after the war. Perhaps this was part of Baron Strucker’s extensive preparations after he was shown the future.

Destruction was taken down by Captain America, the Black Panther and Agent 13. It was then impounded by Wakandan authorities.

It is *possible* that the android who knocked out Captain America and Bucky in 1945, allowing Baron Heinrich Zemo to send them to their death, as a similar — or the very same — android. They have a somewhat similar appearance and speed. But this is flimsy.

In 2001, after raiding a lab operated by Helmut Zemo, the US Commission on Superhuman Affairs used Heinrich Zemo’s plan to build a Destruction knock-off for site protection.

This version seemed stronger but considerably slower, and was easily wrecked by the Redeemers.

It can talk, but says nothing of substance. So I guess it has human-level intelligence.

Drawbacks:
MPR (if the two studs on its body are taken out (DEX/STR against 08/05, 1 RAP needed), Destruction has its BODY Current Condition immediately reduced to 0).

This version wasn’t seen long enough to hazard stats. It seemed to just be a big security robot with something like DEX 04 STR 10 BODY 10 and no Skin Armour or Martial Artist.

Source of Character: Captain America (1968 run) #100. Which was, counter-intuitively, the first issue.