Jay Hunter was a small-time hood in Harbortown, New Jersey. He worked for a crime boss named Max Raven. Young, over-ambitious, and eager to “make something of himself”, Hunter ended up making Raven nervous enough to order him killed.

Jay’s father, Dr. Simon Hunter, was a scientist. He was intent on creating a serum to develop heightened senses in humans. Dr. Hunter wanted his son to make something of himself in a more honest way. During one of Jay’s visits, he tried to convince him to take the final version of the serum. Dr. Hunter hoped Jay could use the powers it would give him to become a hero.

Jay refused, stating that seeing his father slave away over the years for nothing had convinced him to take the fast and easy way through life. It was at this moment that the assassin sent by Max Raven busted in, guns blazing.

The thug shot both father and son. But Dr. Hunter used his dying breath to give Jay his serum, hoping it would save his son’s life. As a result Jay survived, and developed super-human powers. After recovering, he returned to his father’s loft, and discovered a costume there.

I shall become… a destructor!

Jay swore he would become a Destructor, and bring down Raven’s mob to avenge his father’s death. Using all five of his heightened senses and his great agility that resembled “the speed of a wild animal”, the Destructor waged a one-man war on Max Raven’s gang.

Desperate, Raven contacted the Slaymaster (no relation), an elite assassin. He dispatched him to eliminate the Destructor. The battle resulted in Slaymaster’s death. Jay then posed as the killer to gain entrance to Raven’s headquarters. Just as Jay was about to reveal his true identity to Raven, rival gang members entered. They gunned the crime boss down.

The Destructor defeated the assassins. He then revealed himself as Jay Hunter to Raven, just before the criminal died. On his father’s grave, Jay vowed that Max Raven would be the first of many mobsters that he would fight to destroy.

Soon after, the Destructor came to the attention of the Combine. It was a syndicate faction bidding for total control of organized crime. Using equipment designed by criminal scientist Dr. Shroud, they sent a villain called Deathgrip (no relation) to kill him. But the Destructor defeated him.

As part of his infiltration into organized crime, Jay took a job in New Mexico as chauffeur. He worked for Big Mike Brand, syndicate lord and rival of the Combine. He started becoming close with Brand’s daughter, Angela, who was distraught after recently learning her father was not the respectable businessman she thought he was.

All the while, Jay gathered information, and used it to strike against the syndicates as the Destructor.

In his final recorded adventure, the Destructor interfered with the Darkriver Project. Dr. Shroud masterminded this enterprise for the Combine. During this confrontation, exposure to radiation gave Jay the ability to fire destructive energy blasts from his hands.

Surely, the Destructor has continued to fight against the syndicates, the mob, and the Combine to this day.

As the Destructor, he wears a blue bodysuit, with ridged red gloves and boots, red belt, and a devil-like red pattern on the face area of his mask. White trim was added around the gloves and boots from his second adventure on.

Jay started out as a smart-alecky young thug, always smoking a cigarette and flipping a coin. He was very ambitious, eager to move his way up in Max Raven’s organization. Jay was quick to put down his father and his father’s work. But he changed his ways once his criminal activities got Dr. Hunter killed.

His perspective on things has totally changed now. As a crimefighter, he is determined to bring down as much organized crime as he can. In fact, he’s dedicated all aspects of his life to this goal, in the hopes of avenging his father’s death.

Drawbacks:
Guilt (father’s death), SIA to destroying organized crime, Secret Identity, Loss Vulnerability: All enhanced sense Powers drop to 2 APs when Destructor is not in danger (or in a potentially dangerous situation). 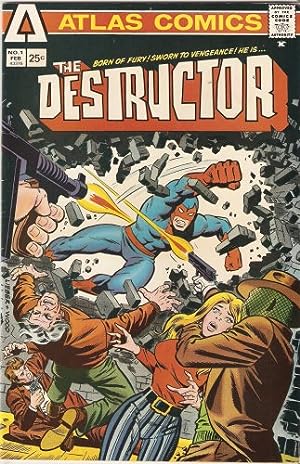 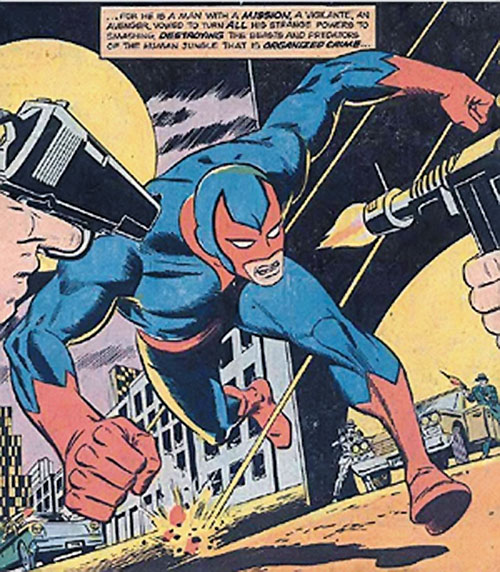