Destructor was an early foe of Ms. Marvel (Carol Danvers), back in 1977.

If a story needs a purple-clad late Silver AgeSuper-hero comics from the late 1950s to the early 1970s. villain, you can consider Destructor.

Korman is a gifted technologist. He specialises in weapon systems (such as potent energy beam projectors) and traps.

He has a keen deductive mind, and comes up with clever plans based on those deductions.

He also rides a small flying platform, for both mobility and better firing angles. 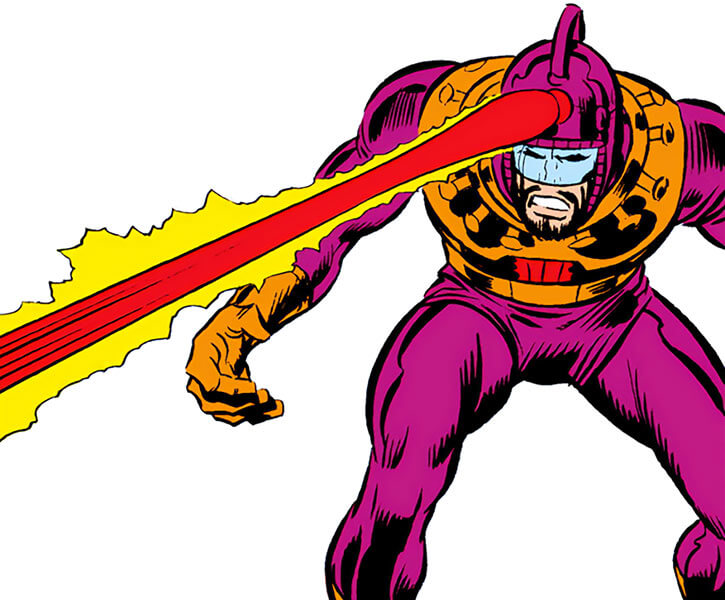 Weapons designer Kerwin Korman spent years providing advanced weaponry and other gadgets. He worked in his own lab, and his customers included the likes of Hydra.

It seems that he also worked for the US government.

For instance the governmental Project: Doomsday Man super-robot was armed with tachyon blast cannons. These weapons are apparently one of Korman’s signature technologies.

Tiring of his engineering career, Korman instead became a supervillain.

As he pivoted, he sold his secret lab in Brooklyn to the Scorpion (MacDonald Gargan).

Gargan wanted to use the large acid bath therein to kill J. Jonah Jameson. The extensive array of traps within the lab would foil any would-be rescuer, such as Spider-Man (Peter Parker).

However, it was Ms. Marvel who responded. She overcame the traps, rescued the publisher and defeated the Scorpion.

I shall become… a criminal

Now calling himself the Destructor, Korman approached his former competitors at AIM with this data. He offered to defeat Ms. Marvel and analyse her costume’s systems.

AIM took the deal. But they insisted that Korman take her alive. Even though the Destructor insisted that they were underestimating her power.

Korman mistakenly thought that he needed to take Ms. Marvel down in order to study the Psyche-Magnitron remains in peace. In actuality, she didn’t know about the cave.

The Destructor confronted Ms. Marvel as she was again fighting the Scorpion. Knowing how powerful she was, Korman shot her in the back without warning.

He managed to blast her a second time with his tachyon cannon. But Ms. Marvel knocked him out before collapsing.

Both fighters recovered. But thanks to her 7th sense, Ms. Marvel avoided the Destructor’s third blast. The inexperienced Korman partially froze, and Danvers took him down.

An AIM team immediately came after Korman so he wouldn’t talk. They distracted Ms. Marvel by forcing her to save children from a collapsing wall.

AIM wanted to make an example of Korman, pour encourager les autres  . And perhaps for once having been a competitor.

They used their Psycho-Conditioner to destroy his will. Ironically, the device had originally been built by Korman.

But, perhaps because he knew how the Psycho-Conditioner worked, Korman wasn’t completely debilitated. He escaped, recovered his Destructor costume, then returned to the Psyche-Magnitron cavern.

Korman sought to arm himself with Kree weapons, then take his revenge upon AIM and Ms. Marvel. But Ms. Marvel was already there, fighting the Doomsday Man robot.

The addled Korman discreetly rummaged through the wreckage. He foolishly opened an odd-looking box (no relation). Exposed to the unearthly radiance of the Psyche-Magnitron’s power core, he :

Blindly firing his energy beam as he screamed and thrashed about, the Destructor wrecked much of the cavern. He collapsed the cave upon himself and the Doomsday Man, which Ms. Marvel has just immobilised.

Kerwin Korman would eventually return. But first, this series of profiles must take a detour to discuss the Doomsday Man. 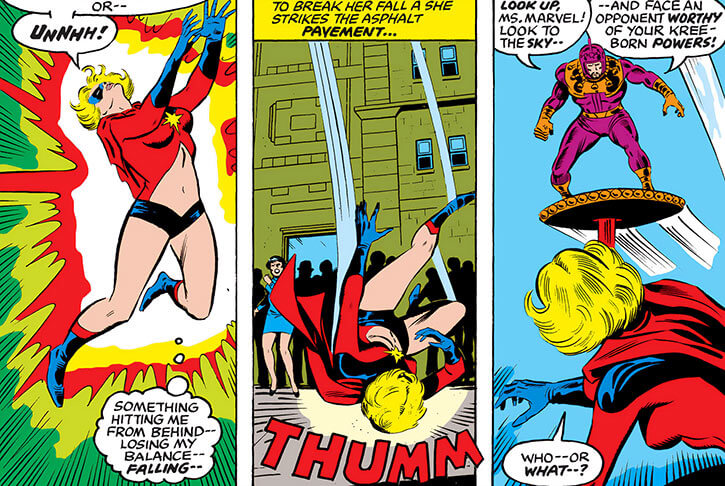 A smart, cautious, analytical guy. But he wished his life were richer in excitement, wealth and power.

After escaping from AIM he seemed intellectually very diminished and confused. He apparently recovered – but not wholly, and that took decades.

“Have it your way, my friend — but I think you’re underestimating the woman — and making a very serious mistake.”

“The same genius which built weapons for Hydra has created the Tachyon Blast — a bolt of energy which moves faster than the speed of light — and shatters anything which may lie in its path ! Professor Kerwin Korman may be no match for Ms. Marvel, gentlemen, but believe me — the Destructor most assuredly is !”

“Look up, Ms. Marvel ! Look up to the sky — and face an opponent worthy of your Kree-born powers !”

(After being exposed to the Psyche-Magnitron power core) “I can’t feel — anything ! Sight, hearing, smell, taste, touch — they’re all gone ! ALL GONE !!”

Definitely a Supergirl villain. He would have allied with the Council instead of AIM, boasting that his tachyon blast could kill Supergirl.

After the Council turned against him for his failure against the Maid of Steel, he mistakenly attempted to steal Kryptonian technology from Supergirl (who didn’t actually have such a technology cache in Chicago). Korman thus was accidentally fused with the robot Matrix Plus, a more powerful version of Matrix Prime.

Apparently, Korman always sets up a number of traps in his Labs. Presumably to persuade his clients of the necessity of paying when they receive his creations. The Brooklyn Lab had :

After the Psycho-Conditioner, all of Korman’s Mental and Mystical Attributes seemed down to 02.

He also had a Serious Irrational Attraction toward Power, acting spontaneous and incautious to obtain it.

His Hero Points are down by half.

Korman can easily procure scientific equipment, but this is bought off-the-shelf when specifically needed and not Equipment in game terms.

After he suffers from brain damage, Korman seems very diminished. Dropping his Intellect, Awareness and Presence to minus one, and giving him an addition Complication (impulsively and incautiously driven to power) might cover his sorry state.

On the Uncapped Scale, his tachyon blast is Damage 15. No changes in PLs.

Apparently, Korman always sets up a number of traps in his labs. Presumably to persuade his clients of the necessity of paying when they receive his creations. The Brooklyn lab had :

Here I’m doing this little thing again with a Skill Descriptor Power making him a whiz with all sorts of applications at a very specific subject.

I’m going straight at the Attribute level rather than making that Skills modifiers. Both because this is a clearer notation and because it catches more odd applications that might come up in a game. The latter is more comic-bookish, IMO.

In DCH the suit gives him a blocky /BODY/ 08. Here I went *slightly* more detailed, since the Descriptor-based approach M&M system is better at it. Still, the blocky aspect is kept via enhanced Stamina, due to the impression that the suit probably had clever if minor protections against unusual attack forms. Which is mostly based on seeing how he trapped his lab.